Spoilers ahoy! Where possible, major plot points have been avoided or hidden. Minor narrative details and character references are mentioned, so beware.

For ten years the Marvel Cinematic Universe has given us threads of a larger, overriding picture; the mid-credit stinger in 2012’s The Avengers featured Marvel supervillain Thanos, sending fanboys into a frenzy hinting at an apparent subplot involving the universe-ending Infinity Gauntlet storyline. Every single film in the MCU since has continued to build upon this thread, and now with Infinity War, we see the culmination of a decade-long slow-build towards the comic book community’s most anticipated event: the total annihilation of the Avengers and the threat of Thanos’ cosmic powered handwrapping. Featuring a cast of hundreds – literally anyone who appeared in the past eighteen films in the MCU makes a cameo or major role here – Infinity War is the Earth-shattering climax we were promised. The film delivers. 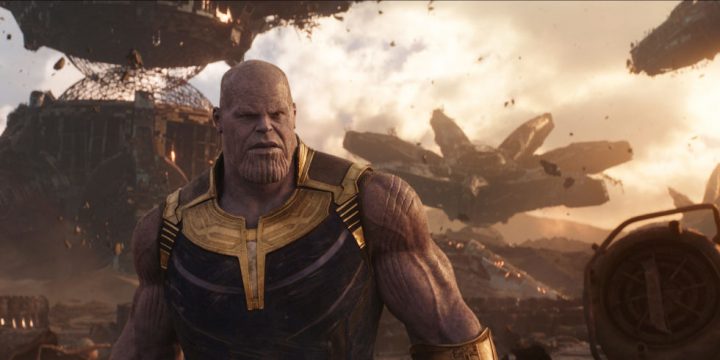 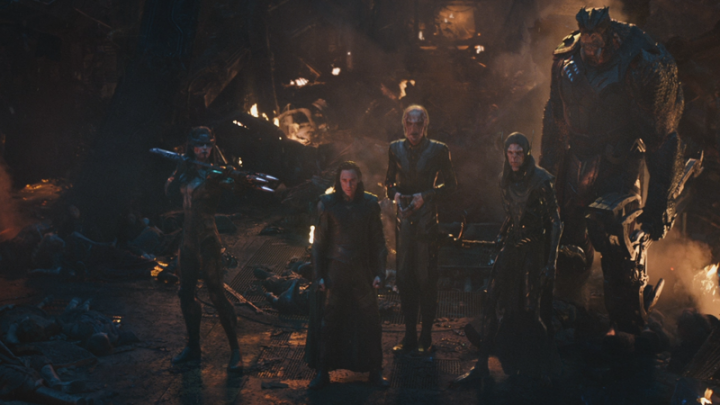 From the moment Infinity War opens, to the moment the film’s expected closing credits sting offers a hint at what’s to come in the MCU, the Russo Brothers have crafted a cinematic experience that can only be described as masterful. Many an MCU film has achieved high praise, most recently with the brilliantly conceived Thor Ragnarok and the record-shattering Black Panther, so suggesting Infinity War is “the best one yet” indicates a rising scale of hyperbolic superhero achievement that never seems to top out. Suffice to say, offering exclamatory exuberance upon this film is to suggest some life-altering event that will somehow live up to the decades of impossible hype the original 1991 Infinity Gauntlet storyline from Jim Starlin’s comic series engenders. Infinity War very nearly achieves this. As a film, it’s a breathtaking stroke of creative genius, a gathering of ingenuity and explosion of long-gestated story-lines and character arcs that culminate with the revelation that Thanos, previously only granted mere seconds in previous films, launches into the pantheon of all-time great screen villains. 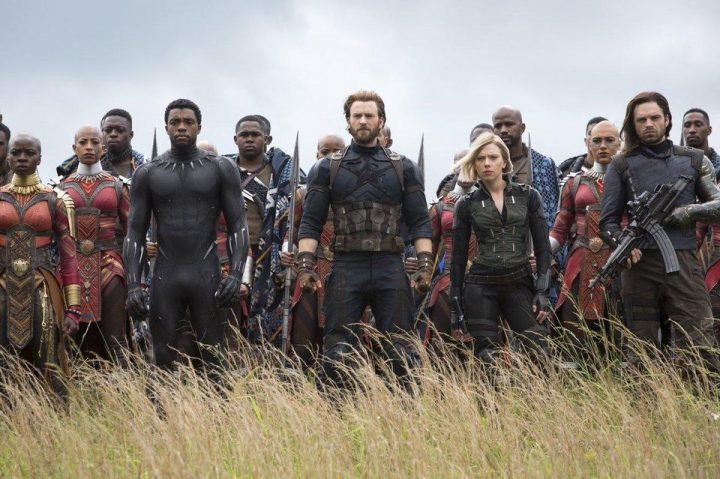 Granted, the film isn’t without problems. The cumbersome ensemble of superstars reprising their roles from previous films isn’t given anywhere near enough screen time to satisfy this fan, but the mighty decision to make the film centred around Thanos – and his relationship with his daughters Gamora (Saldana) and Nebula (Karen Gillan) – lands an emotional weight and counterpunch that you don’t expect, or escape from. Brolin, as Thanos, commands the screen each time he’s on it, and as silly as his purple-hued visage might look he makes a compelling antagonist. The writing on this film is excellent, giving Thanos’ arc towards total annihilation a justification (as insane as it is) that works for the character and his family relationships; the Christopher Markus and Stephen McFeely script deftly cantilevers between the heroes we know and love, and Thanos’ implacable strides towards his Infinity endgame. It’s a delicate balance to get right, and as mentioned the film suffers from not giving the most popular characters enough screen-time or things to do – notably, Spider-Man seems almost redundant in the film’s overall arc, while Tony Stark’s battle of ego relationship with Stephen Strange offers one of the most intriguing on-screen bromances to date – but for sheer entertainment there’s few films so ably directed to bring all these threads together so well. 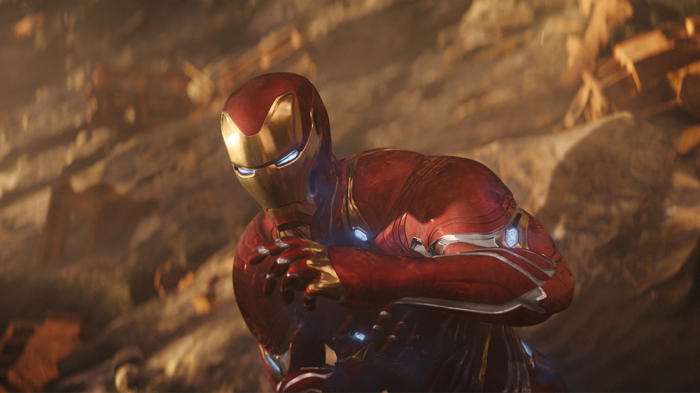 In terms of pure spectacle, Infinity War dwarfs every MCU film before it, and even casts a giant shadow over more popular blockbuster franchises such as Star Wars and Fox’s X-Men. The scale of Infinity War cannot be understated, and all the carnage and destruction you’ve seen in the trailers pales into insignificance compared to the incineration wrought in the full film. Yes, there are casualties in this war – it’s war, after all – and while some are surprising, some are not. It’s as pure a comic book movie as there has ever been, a sprawling multi-pronged narrative taking place not only on different continents but different galaxies in the cosmos. Scenes of city-flattening apocalypse and planet shattering assault are almost continuous, an effects-heavy entertainment that delivers thrills alongside well-earned emotional devastation. Infinity War has been suggested by those in charge as their Empire Strikes Back, and in almost every respect this is accurate. It’s dark, it has consequential weight, and the audience is taken on a journey that feels natural to the tone of the overall franchise and yet manifestly different from all that’s come before. 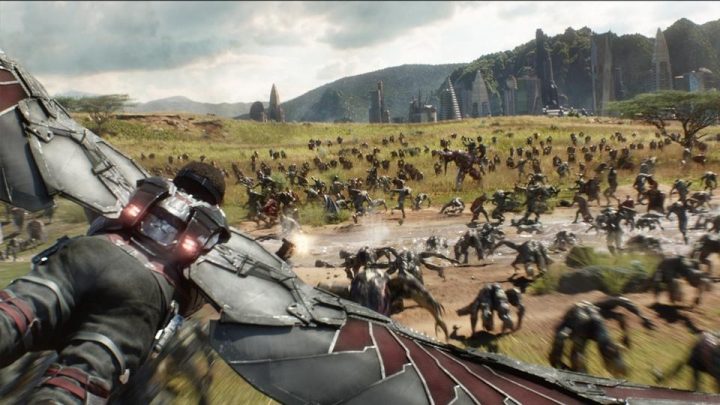 The Guardians Of The Galaxy truly come into their own upon appearing for the first time: the Russo’s handle James Gunn’s rag-tag team with veneration and a seamless expansion of established lore and characterisation. Drax, Quill and Rocket all have their moments of levity, while Saldana’s work as Gamora here is the linchpin of the entire operation. Tony Stark and Peter Parker continue the father-son appropriation begun in Spider-Man: Homecoming, while Thor’s arc – solidified in Ragnarok and expanded greatly here – is truly cataclysmic not only for the character but also the wider MCU. Established supporting characters such as Benicio del Toro’s Collector, Black Panther’s Dora Milaje, and the likes of Gwenyth Paltrow’s Pepper Potts appear in sporadic moments, with the Wakanda-bound climactic battle sequence glimpsed in the film’s marketing offering more than a few moments of fist-pumping hell yeah’s, and the film manages to throw in a couple of really nice surprises the studio has kept hidden. 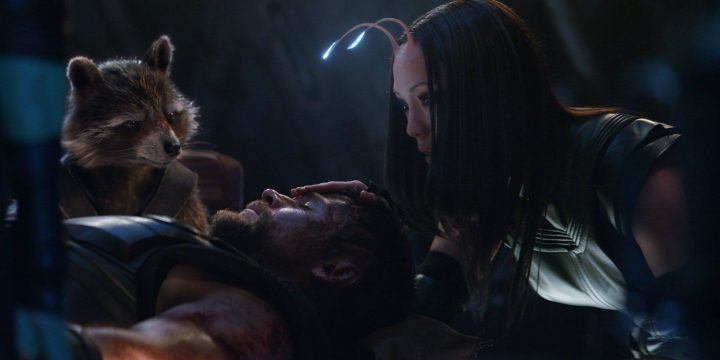 In truth, Infinity War is an orgy of character payoffs earned since the original Iron Man back in 2008; few have come as far as Tony Stark, and although the film doesn’t quite nail the depth of his role amidst the destruction. The romance between Vision and Scarlet Witch also doesn’t gel, although not through any fault of the excellent Bettany and the underused Olsen, although simply through sheer virtue of the stakes involved in the film you can’t help but be swept up in their fate. So too the budding relationship between Bruce Banner and Natasha Romanov, hinted and alluded to in past adventures, but when the moment for payoff comes here, it kinda dwindles a bit. This isn’t so much due to poor storytelling, but rather required narrative expeditiousness, which one could argue causes the film to strike some minor – very minor – missteps in character development. 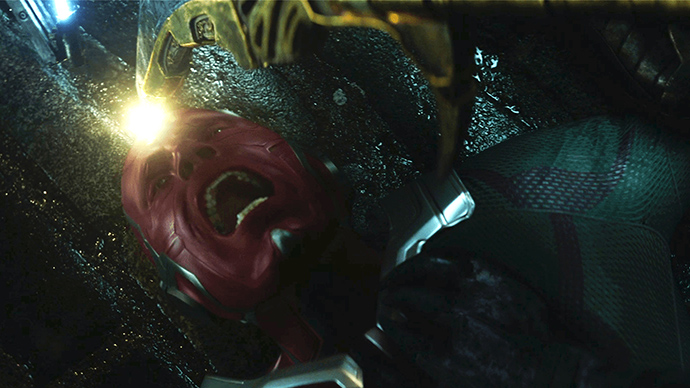 Where the film truly shines is with the Guardians. The moment they appear on-screen, the film lightens up considerably, showcasing yet again how affable and effortless the chemistry between Pratt, Saldana, Bautista, Klementieff, Groot and Bradley Cooper’s Rocket really is. Pratt’s verbal sparring with his fellow humans is a delight, as is Rocket’s hilariously sarcastic repartee with Hemsworth’s Thor, and if nothing else, the film’s banter is on-point yet again. The reprise in Wakanda, seeing Black Panther’s returning cavalcade of stars – including supporting performances by Danai Gurira, Letitia Wright and Winston Duke – lands the punches built upon in the previous film, although Boseman’s titular Panther is little more than cannon fodder here, lacking either a true arc (surprisingly) or a genuinely heroic moment. Minor, but noteworthy. In short, the fate of several key characters within this universe will offer discussion aplenty between now and the 2019 follow-up sequel – untitled as of writing this review – and the franchise’s decision to genuinely (maybe) kill off some of its bigger names has ramifications that will echo for years to come. 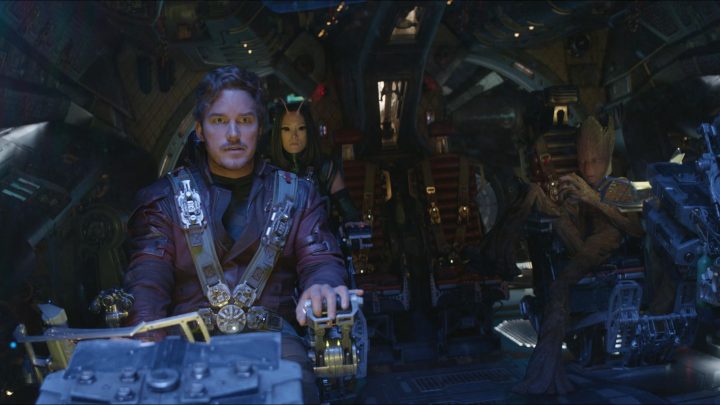 Avengers: Infinity War is a film that perfectly balances the showcase of characters we all know and love, the cosmic destruction Thanos has promised us since 2012, and the wry humour the MCU has come to be known for. As a comic book event movie, Infinity War is sheer perfection, a rare beast in tentpole franchise films that transcends the genre and elevates it beyond its roots. It’s thrilling, emotional, action-packed and revelatory, offering genuinely moving character beats (from both heroes and villains) that are highly memorable. It’s the pinnacle of the Marvel Cinematic Universe, boasting top-tier storytelling of a magnitude even the big screen often seems almost incapable of adequately capturing. Without doubt, hands down, hyperbole aside, Infinity War is the best Marvel movie to date.