With a virtuoso everything-but-the-kitchen-sink directing effort from the master himself, Steven Spielberg’s Ready Player One is a nostalgic blast of cheesy fun and overflowing production design writ large on the big screen. Filled to the brim with pop-culture references – mainly from the 80’s – the film’s go-to mandate of eye-watering visuals and Spielberg’s trademark kineticism, together with Alan Silvestri’s on-point score and some totally rad musical cues (including Van freakin‘ Halen, if you don’t mind!) there’s an absolute smorgasbord of fun and thrills to be had entering this film’s oasis-like dreamscape; so long as you’re Gen X, like me, you’ll have fun. Everyone else… perhaps not quite as much.

Based on Ernest Cline’s incredibly popular novel of the same name, Ready Player One takes place in the near future, where an enormous virtual reality world known as the OASIS exists and has become one of the most powerful economic entities on the globe. The real world, however, is one in which massive amounts of the world’s population is thrown into poverty, with young Wade Watts (Tye Sheridan – X-Men: Apocalypse) living a sedentary existence inside the slums of Columbus Ohio, known as The Stacks. Entering the OASIS, he becomes Parzival, and spends his time there hunting down three mysterious virtual keys to unlock the OASIS’s late designer, James Halliday (Mark Rylance – The BFG, Bridge of Spies) hidden Easter Eggs, which will grant the winner control of the entire game. The CEO of local tech conglomerate Innovative Online Industries (or IOI for short), Nolan Sorrento (Ben Mendelsohn – Rogue One: A Star Wars Story) seeks control of the OASIS for himself and his shareholders, and engages the services of mercenary i-R0k (TJ Miller – Transformers: Age Of Extinction) to hunt down Wade and his virtual friends, including Art3mis (Olivia Cooke – The Signal), Aech (Lena Waithe – Netflix’ Master Of None), Sho (Philip Zhao) and Daito (Win Morisaki). 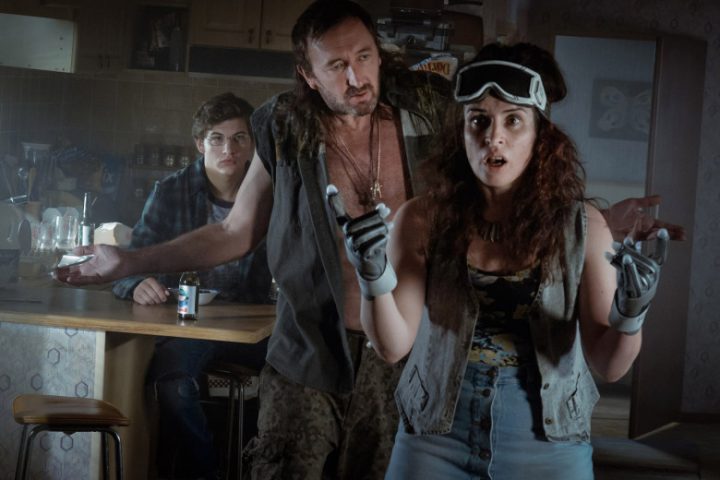 If ever there was a story or idea that a director like Spielberg was born to make, it’s Ready Player One. The director’s career was forged in the gleeful 1980’s, his shadow cast long across the film’s tapping into that decades’ feeling of the fantastical. A story centered around an enormous virtual reality game (similar to The Matrix, only nowhere near as apocalyptic) might seem utopian to a degree present-day humanity might never achieve, but with Spielberg in control the whole thing just works. We are drawn into his world of fantasy, with its levels and monetised achievements unlocking abilities in people’s avatars that approximate those which modern computer games enjoy, although the throwbacks to early gaming – the film’s central climactic element is unlocking the secrets of games played on a 1982 Atari console, so the lineage is strong – are both hilariously realised and well thought out. 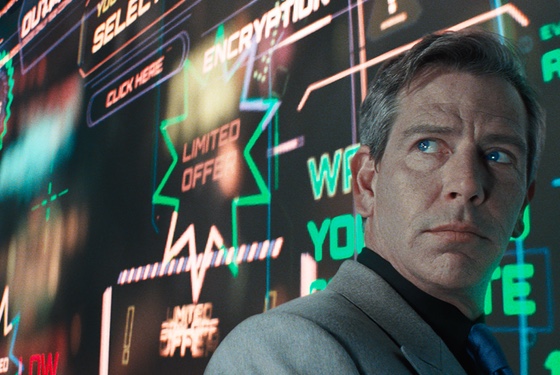 The OASIS is exactly as it sounds, a world in which you can become anybody or anything, from heroes to villains, soldiers to creatures of absolute evil and depravity, and the world itself is made up of hundreds of other games and ideas from across the entirety of pop culture, allowing people to effectively go anywhere. Hell, Spielberg even references some of his own works, most obviously Back To The Future, whereby the DeLorean reappears for a protracted spell, as does composer Alan Silvestri’s own theme at key moments. Marketing will have shown you all manner of amazing sequences including a spectacular chase through what ought to be New York City but is actually an amalgam of multiple Americana landmarks, interspersed with the T-Rex from Jurassic Park, Kong from King Kong, and various other computer game and cinematic legacies, but you ain’t seen the half of it. If you’re going in to Ready Player One set to spot your favourite characters or designs, chances are you’ll come away happy, if not utterly thriller to see some of the things ILM and Spielberg hide on the edges of the frame, and I suspect this film will be freeze-framed for years to come as fans seek out all the little nods to several decades of creativity across multiple platforms.

The story is essentially a quest film, apropos of most modern games to say the least, and Zac Penn’s screenplay (co-written with Cline himself, as well as a few other uncredited hands) is sturdy without being particularly engaging. The ensemble works well enough as a group of underdogs trying to stick it to The Man (Mendelsohn’s terrific performance as Sorrento anchors the reality of the film’s aesthetic) and save their world – hell, you can spot a Spielberg, Zemeckis or Lucasian trope coming a mile away here – in the flashiest manner possible, and aided by some absolutely astonishing digital artistry Ready Player One achieves all it sets out to do. Analogous to a computer game itself, the film has setbacks, twists, enormous set-pieces and a load of meta-references for fans to catch if they dare (watch out for the “Zemeckis Cube”), although there was a lot of familiarity to the movie’s overall plotting I felt hamstrung it to a point. This isn’t Spielberg’s strongest character film, that’s for sure, but it’s easily his best “just for fun” movie in quite some time. Ready Player One just screams childhood glee for me,  and I, for one, had a blast with it.

I think, however, and this isn’t so much a criticism of the film and more a simple fact of timing, the film’s appeal and delivery of referential existentialism to the pleasure centres of the brain of people born in the 70’s and early 80’s is that that the audience the film is limited to. The 80’s-centric style and pinpoint framing of the characters’ reference point for entertainment almost certainly won’t attach quite as heavily to older or younger generations. A lot of the film is heavy with nostalgia for the 80’s, particularly cinema and gaming culture, and unless you’re of an age where that matters, a lot of Ready Player One probably won’t. Wade’s avatar, which seems like a bizarre Final Fantasy character, as well as Art3mis’ manga-via-Luc-Besson influences, tread the fine line of Uncanny Valley, while the rest of the OASIS avatars evoke broad-spectrum grotesqueries and well known silhouettes (Freddy Krueger and Jason Voorhees cameo, while a brief but hilarious turn from one of horror cinema’s great possessed dolls will have you guffawing heavily) and the nods to personal favourites Knight Rider, Batman ’66, Aliens and RoboCop as well as an astounding, extensive sequence involving Stanley Kubrick’s The Shining, are often hypnotising if you get the references. Many won’t, I suspect, and the film isn’t strong enough to stand on its own as a story and conceit without having the associated baggage of nostalgia propelling it along. 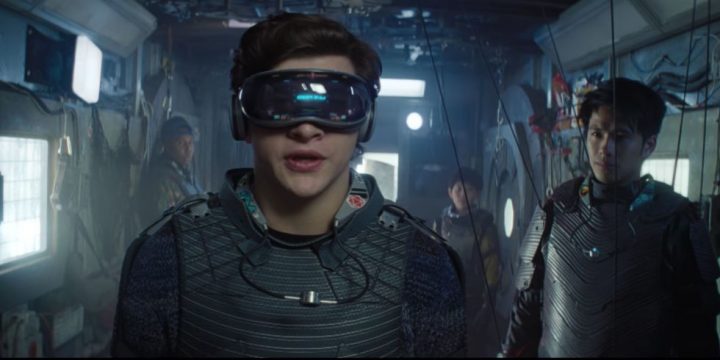 The cast are top-to-bottom excellent, with Tye Sheridan making a good fist of the leading character despite having an indifferent backstory and shallow motivation, while Olivia Cooke’s Artemis, as eponymously sexy and lithesome as she’s intended, is reduced to merely being a foil for the dude to fumble with. Mendelsohn, as mentioned, has a ball in the chief villain role, hamming it up superbly as he chews the scenery alongside Hannah John-Kamen’s real-world henchman and TJ Miller’s Skeletor-esque virtual one. Spielberg’s current muse Mark Rylance is amenable as the film’s Steve Jobsian uber-designer Halliday, the MacGuffin of all MacGuffins really, and supporting roles to Lena Waithe, Philip Zhao and Win Morisaki, as Wade’s gang, allow the scope of the film to remain fixed on youth and rebellious misbehaving.

With its weird dystopian look and lived-in sensibility, Ready Player One’s broad-canvas creativity seemingly knows no bounds, as every inch of the film’s frame is stuffed with detail to savour. The real world’s grim and gritty melancholia, part Blade Runner and part Spielberg’s own Minority Report (cue the extensive drone use) is effective, and the digital artifice of the OASIS is among the very best effects work done in a major film this year, hands down. ILM, who accommodated much of the film’s fantastical elements, have literally outdone themselves and more with what they accomplish here, the perfect blend between the real and the fake, and although I suspect a lot of the OASIS-set footage is entirely created inside a computer, the fact I’m not too sure any more indicates either just how good the graphics technology has become or just how shit my eyesight is. Either way, Ready Player One’s production design and overall look (the film’s DOP was Spielberg regular Janusz Kaminski) is breathtaking and whether you enjoyed the story and/or characters or not, there’s no denying the film’s visual spectacular-ness. 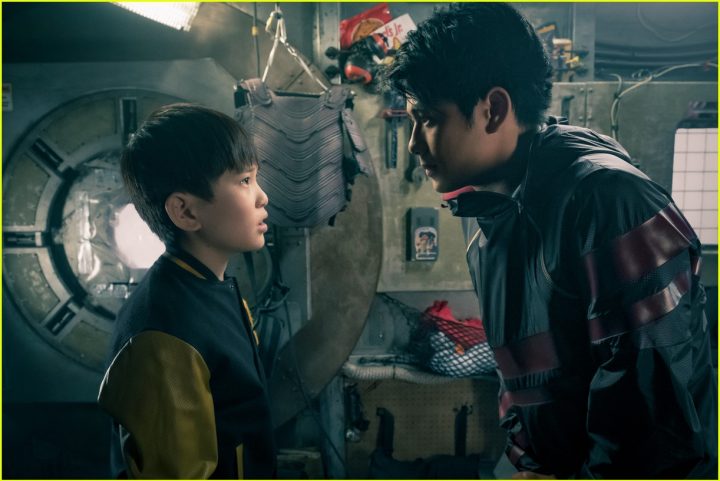 Despite a sparkling abundance of visual motifs and well-known properties dominating the movie’s backdrop, Ready Player One’s chief weakness is a problematically indifferent protagonist and a fairly pedestrian plot arc. Spielberg’s direction is by this stage as strong and self-assured as the very best the medium has ever offered (this film looks effortless in his hands, it’s so well done) and the production value and re-watchability of the whole thing is incredible to say the least, but I’m highly doubtful the film’s over-reliance on a generational love of key elements and nostalgia will overcome older or younger viewers’ disposition not to care. If you’re a Gen X-er you’ll have a blast, but those of a larger vintage or a younger ignorance will likely find much of the film flying over their head. Caveat in place, Ready Player One comes highly recommended for those who love Spielberg’s strong, loud beating of the nostalgia drum.