I’ve been sitting on this review for several days now, and even I, an avowed fan of Michael Bay, cannot overstate just how awful this movie is. Transformers: The Last Knight is something of an anti-film, a piece of cinematic garbage masquerading as blockbuster entertainment that indicates Bay has learned nothing, literally nothing at all, about why people have continued to regard this franchise as an abortion of story and character over nonsensical sound and fury. The fact that Paramount continues to buck the trend of actually trying to deliver good content that will stand the test of time is possibly even more reprehensible given the money thrown at the screen, but the fact remains that Bay and his sycophantic production team (particularly the “writers” of this absolute shite) have ruined a perfectly good B-movie franchise to the point it barely resembles the very thing that made it popular in the first place. 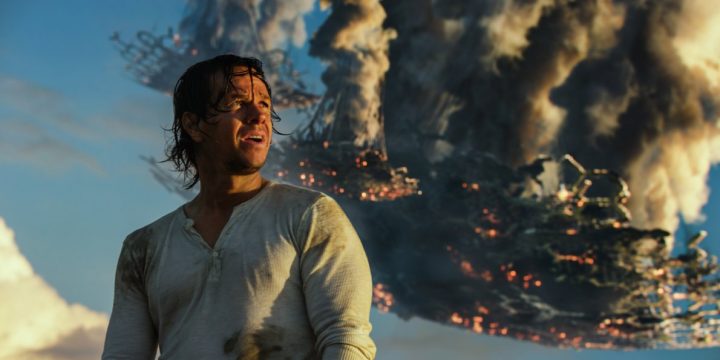 Years after the events of the previous film, the Transformers are persona non grata on Earth, with the world’s militaries setting up a new anti-robot hunting force, the TRF. Cade Yeager (Mark Wahlberg) continues to fight the good fight against the Decepticons by giving Autobots refuge in his desert-located junkyard. Meanwhile, Optimus Prime (Peter Cullen) – last seen leaving Earth to seek vengeance on his makers – crash lands on the remains of Cybertron, where a mysterious being known as Quintessa (Gemma Chan) tells him he must destroy the enormous Unicron in order to revive his homeworld. Helping Cade in his fight is young Izabella (Isabela Moner), a tomboy loner whose home was destroyed during a previous Transformer battle. Meanwhile, Sir Edmund Burton (Anthony Hopkins), an astronomer and font of Transformers history on Earth, has discovered the end times are coming, and brings into his world Professor Viviane Wembly (Laura Haddock), who helps whatever goes bang bang a bit better than before. Christ, did you just read that? 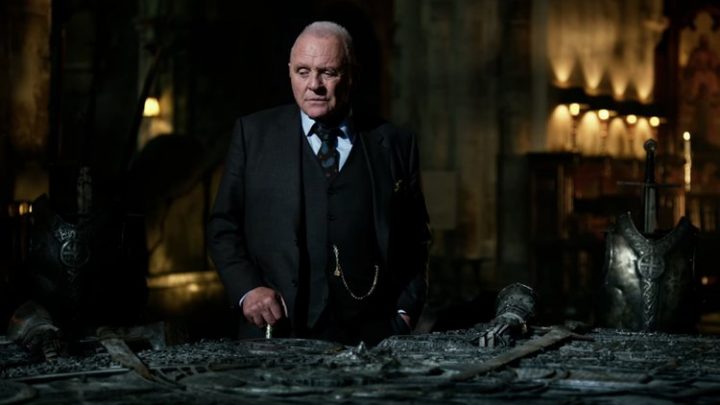 Look, I’m as in the dark about what was going on in this film as anybody, and I’m a fan. At some point they’re all going on about a “talisman” that does something and I’ve no idea what, other than it keeps bringing Decepticons and Autobots into conflict with each other, while us tiny meat sacks are caught in the middle. The writers on this thing avoid things like tact and nuance and apply the literary equivalent of a sledgehammer to a screenplay that’s as faced paced as it is idiotic. I know, asking for depth and coherence in a big-budget toy commercial isn’t really going to get us very far, but you kinda get the sense that in this film, everyone just gave up caring. At least in the awful Revenge Of The Fallen, plot superseded the action to a degree, whereas here not even the most basic idea of a reason to give two shits is tapped. Recycled ideas from the previous films (note: remember that henchman who was “punched” by a car tyre in Age Of Extinction? There’s a reprise of that idea here… yawn) and an utter lack of basic cinematic logic, including trying to keep the audience from being… you know, confused, are injected into a testosterone-infused smash-and-grab idea that never goes anywhere. 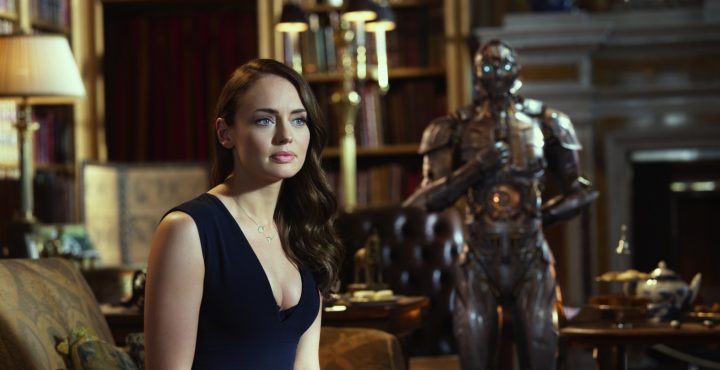 The Last Knight is a film without form, with events and ideas that just…. happen. It’s like the whole thing was being made up on the fly, from day to day with Bay and Co sitting in their fold-out chairs chugging brewskis and betting each other they couldn’t come up with a more ludicrous idea than the last. The plot (for want of a better word to call this shameless money grab at raping our collective childhoods) moves at such a pace as to be nearly incomprehensible. Characters intertwine and mingle and cross paths with more contrivance than any of the previous entries in this saga, destiny driven by screenplay requirement rather than natural gravitational force, and Bay’s retreading yet again of human history has by now become less mysteriously intriguing than it is boring, as pontificating Edmund Burton explains in his most round-voweled manner. For the entirety of the film’s 2 and a half hour slog, at no point does Bay ever try and elevate the material beyond redundant juvenile idiocy, crafting rancid jokes and hideous trailer-grabs worthy of little more than derision. 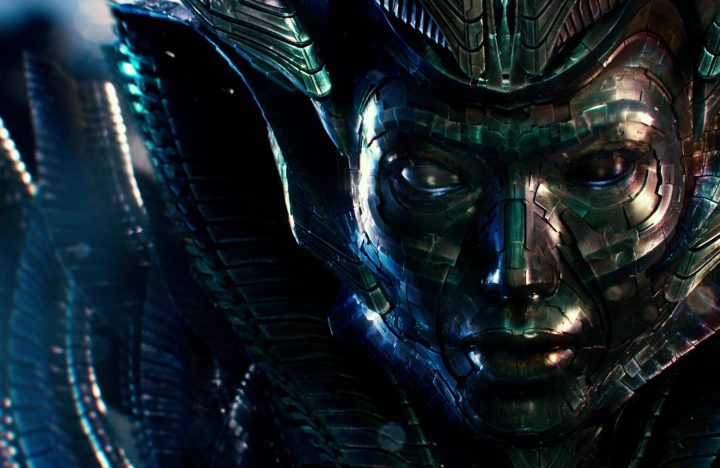 Once the “plot” gets itself set, Bay’s extravagant action aesthetic once more takes hold, a slick, glossy edit of grand explosions and utter balderdash, property damage and constant “transforming” taking the place of excitement and reason. As with all these films, the transformers themselves are over-designed shrapnel glued together by the digital pixel-trickery of ILM’s best keyboard jockeys; while they’re standing still, Bumblebee, Megatron and the gamut of faceless automatons look pretty cool, but it’s when things become more frantic and the explosions and chases kick in that the film loses all sense of itself. It’s entirely style over substance, action simply for its own sake, the kind of destitute emotionless carnage Zack Snyder employed in the final act of Man Of Steel, only here it runs the length of an entire feature film. Bay’s well-honed sensibility from his previous work, like The Rock and Armageddon, is absent entirely as he pulverises the audience with Capital A Action and Important Shit Being Said at all possible times. There’s almost no quiet, no respite, and when there is it’s filled with either casual misogyny or racism or sexism or some other appalling thing Bay thinks is funny. Impossibly tone deaf, The Last Knight doesn’t try and avoid the issues people had with the other films, it just doubles down on them.

Big shout out to whoever wrote poor Jerrod Carmichael’s “comedy”, a neverending stream of torment about going to prison, as well as the ineffectual use of Isabela Moner’s kid character, while massive kudos to whoever decided to get John Turturro to use the word “scrotum” in a Transformers film again (because it worked so well last time) without being fired. Mark Wahlberg’s Cade Yeeeaaahhhhger is as indifferent to humanity’s fate as Paris Hilton is to particle physics, and Wahlberg never musters more than looking like he’s just completed a marathon before every moment of dialogue. Breathless isn’t a performance style, Mark, it’s an annoying byproduct of Bay’s enthusiastic camerawork. Anthony Hopkins’ character is essentially Mr Exposition for The Last Knight’s confounding subject matter, an effluvial mythology riven throughout mankind’s, and although the constant glint in his eye is always a treat, having the old guy spout inane jive talk in casual conversation is absolutely asinine. Laura Haddock’s Professorial role is a far cry from the sexpot eye-candy of the franchise’s previous entries – Megan Fox and Rosie Huntington-Whitely and Nicola Peltz will be savage in their condemnation of their roles, no doubt – but she offers nearly nothing by way of worthwhile inclusion. And Josh Duhamel, returning to the franchise as it’s one lasting human legacy player, is vastly under-serviced by the jingoistic military dialogue he’s forced to endure.

Transformers: The Last Knight is a film that hates its audience. It’s a film content to treat the viewer with utter contempt for both intellect and humour, apparently believing that juvenile, idiotic dialogue and pretentious, overly portentous statements of pomposity can withstand actual critical thought beyond the superficial concussive explosions Bay punctuates his “film” with. With a plot that makes no sense at all, characters without restraint or a lick of humanity, and Bay’s honest-to-God lack of concern for our eardrums, The Last Knight’s mythology-rending hodge-podge of shouting, screaming, obnoxiously ugly storytelling is an affront to humanity and all that’s good in this world.