Any way you cut it, Ridley Scott’s return to the Alien franchise with Prometheus was a disappointment. With decidedly mixed-to-negative reaction, and almost universal panning from the franchise’s long-time fans, the result of Prometheus was the not-too-inconsequential decision to give the property to District 9 helmer Neill Blomkamp to reboot. While Blomkamp’s project would see a return of Ellen Ripley to the saga and disregard all the films save the original two, Scott came back to Alien with plans for a multi-film arc that would effectively shunt Blomkamp’s efforts out of the frame. Alien: Covenant is the result of ol’ Ridley’s second sequel bash, aesthetically similar more to the original Alien than Prometheus (down to the green-hued computer font used as subtitles for the movie) and if this was an intentional decision to sideways skip the conundrum of Prometheus, it sorta, kinda worked.

Plot synopsis courtesy Wikipedia:  In 2104 the colonisation ship Covenant is bound for a remote planet, Origae-6, with two thousand colonists and a thousand human embryos on-board. The ship is monitored by Walter (Michael Fassbender), a newer synthetic physically resembling the earlier David model, albeit with some modifications. A stellar neutrino burst damages the ship, killing some of the colonists. Walter orders the ship’s computer to wake the crew from stasis, but the ship’s captain, Jake Branson (James Franco), dies when his stasis pod malfunctions. While repairing the ship, the crew picks up a radio transmission from a nearby unknown planet, dubbed by Ricks (Jussie Smollett) as “planet number 4”. Against the objections of Daniels (Katherine Waterston), Branson’s widow, now-Captain Oram (Billy Crudup) decides to investigate. As the Covenant remains in orbit, an expedition team descends to the planet’s surface and tracks the transmission’s signal to a crashed alien ship. While on the surface, security team members Ledward (Benjamin Rigby) and Hallett (Nathaniel Dean), Sergeant Lope’s (Demian Bichir) husband, are inadvertently infected with alien spores. Karine (Carmen Ejogo), Oram’s wife, helps the rapidly sickening Ledward back to the lander, where Maggie Faris (Amy Seimetz), wife of pilot Tennessee Faris (Danny McBride), quarantines them both inside the med-bay.

Finally, after long years of waiting, the Alien franchise returns to being outright horror. Since Alien Resurrection’s questionably French moistness, the aliens have endured sloppy Predator battles and hard sci-fi crispness in Prometheus, but Covenant returns them to the preeminent place among the screen’s great horror monsters. A direct sequel to Prometheus, which sees Michael Fassbender reproduce his new-Bishop role of the series’ resident artificial lifeforms, and give us the payoff to Noomi Rapace’s Elizabeth Shaw from that film, Covenant also replicates the same tangibly visceral horror aesthetic from Scott’s original – an original, I might add, by which all other genre films ever since have been measured.

To a large extent Covenant actually plagiarises a lot of the structure of Alien overall: a ship of relatively untrained humans descend to an unknown planet to investigate a mysterious signal, where they encounter a highly adaptive and vicious alien life-form, suffer casualties, and spend a large portion of the film a) figuring out what to do and b) running, screaming, etcetera. As the body count rises and the stakes follow suit, Covenant diverts from its straightforward exploratory narrative and twists into the dark, juddering, bloody horror we’ve all come to see. Covenant is exceptionally creepy when it needs to be (again, practical effects work better than their digital counterparts, and the betwixt and between are immediately visible) and Scott’s ability to ratchet up the tension – either by a thunderous musical score from Jed Kurzel, who appropriates thematic material from Alien and Aliens, or by equally malevolent sound design – is second to none. There’s artistry to spare in this film, with an attention to detail so intricate and dimensional the film will fascinate with freeze-frame re-watches for years to come. 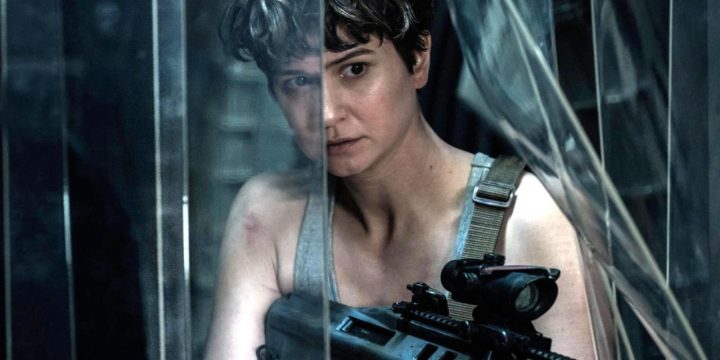 The film’s screenplay (co-written by Spectre and Skyfall scribe John Logan, as well as Dante Harper) offers respectably generic human characters, from Billy Crudup’s erstwhile replacement captain, to Katherine Waterston’s Ripley-esque-but-not-quite “Danny” Daniels, to Danny McBride’s jowl-jawed pilot, although the film’s best moments of introspection come from Michael Fassbender’s dual performance as Walter and Prometheus’ David. Interestingly, Fassbender adapts an American accent as Walter and a British one for David, which makes their dialogue together feel eerily like Andy Serkis’ work as Gollum/Smeagol in Lord Of The Rings. Ruminations on artificial life once again dominate a film’s overall subject matter (elements of Byron, Wagner and Shelley are mentioned or intimated), interspersed with more expository mechanics of the aliens’ physiognomy and ultimate genesis. But the film works best when its focus is on sheer survival, and Scott’s muscular command of framing, editing and cinematography ensure an effective opus that more than stands alongside the earlier brethren in the franchise. What it sacrifices in careful character construction, Covenant extricates every possible moment of terror and tension, leaving the final showdown between the adult Alien of the trailer and the remaining survivors to white-knuckle their way through convoluted but compelling antics to remain… you know, alive.

I had a lot of fun with Covenant, despite it being an obvious retread of the iconic film from which it spawned. Scott ticks all the requisite boxes of stuff I wanted to see, throws in a couple of clever new elements, and explains a-lot-but-not-everything about the aliens themselves. Given its replication of many of the franchise’s established narrative elements (including the now-archetypal last-minute throat-clutcher) there’s an argument that Covenant isn’t as original a film as it ought to be to separate itself from Prometheus or the saga’s direction overall, but it’s eminently better than either Prometheus or the preceding clutch of films to bear the Alien moniker, and kicks off a new trajectory with both familiarity and bold enterprise.