It’s rare these days that a franchise of sequels actually improves with each new instalment; aside from The Fast & The Furious, how many other recurring film series’ have gone from strength to strength with each film to the level of success Tom Cruise’s Mission Impossible saga has enjoyed? Not many, that I can think of. While MI2 was largely a disaster of storytelling, from JJ Abrams’ MI3 onwards, the franchise has continued to build itself as a competitive American answer to the mostly British James Bond films. Ghost Protocol delivered Cruise at his action-film best, legitimately staking a claim to being the preeminent superstar of his era after actually hanging for real outside the world’s tallest building. Now, Tom Cruise goes one better (or more insane), famously hanging himself on the outside a cargo plane as it takes off; it’s an opening sequence to beat them all, frankly. Rogue Nation, the fifth film in the Mission Impossible franchise, is tense, gripping, entirely thrilling and altogether entertaining, a solid entry into the series and, to-date, one of 2015’s best action films. 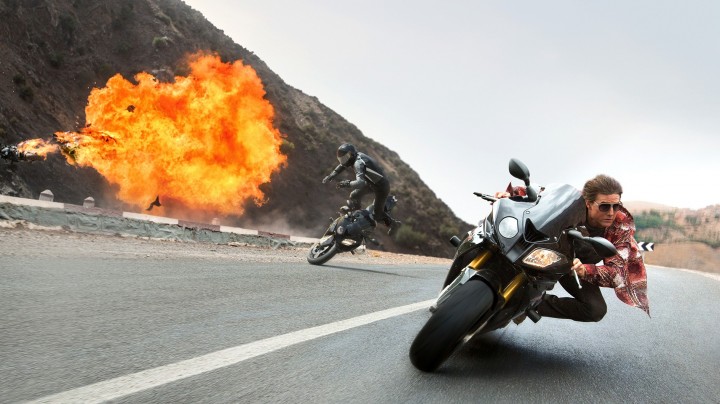 While on a mission in Russia, IMF Agent Ethan Hunt (Cruise) discovers a link to the mysterious Syndicate, a kind of anti-IMF working to uncover the identities of agents around the globe. With CIA Director Alan Hunley (Alec Baldwin) seeking to shut down IMF, Hunt recruits his associates Benji Dunn (Simon Pegg) and Luther Stickell (Ving Rhames) to assist him when his ability to track the Syndicate is compromised. William Brandt (Jeremy Renner) works to keep the CIA from locating Hunt or the mission until it is completed, while another undercover operative, Ilsa Faust (Rebecca Ferguson) continually crosses paths with Hunt as they work to bring the Syndicate down.

I’m not sure what it is about international espionage, but it sure does lure in the beautiful people. Cruise’s fifth venture into the world of subterfuge once more sees a film shot in a variety of exotic locales, populated with exotic women and square-jawed Eurotrash henchmen, coupled with technologically superior spy games and the usual MacGuffins to keep the plot moving. As far as the story goes, it’s a whole heap of nothing over everything – the Syndicate appropriates Bond’s own SPECTRE organization, the of evil tentacles of world manipulation keeping Hunt crossing continents tracking down its boss, played by Sean Harris. 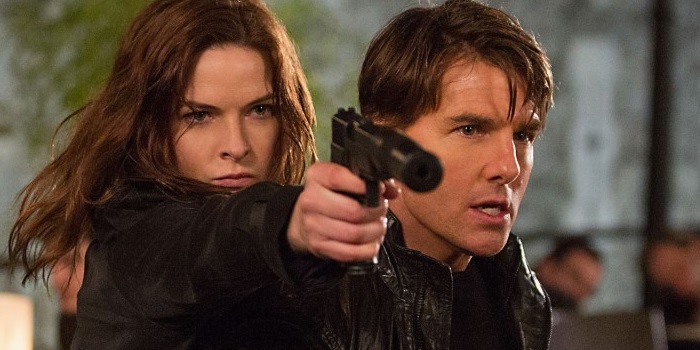 The screenplay, written by director Christopher McQuarrie, who also helmed Cruise’s vehicle Jack Reacher (as well as indie cult hit Way Of The Gun), is filled with typically “impossible” twists and turns, including Hunt, Benji and Isla having to break into an incredibly secure power plant (the kind of security they probably wish they had at the White House). McQuarrie’s script is razor-sharp, a non-stop adrenaline rush of set-up and payoff, with the franchise’s signature ability to craft incredibly complex “break into a secure complex” motifs working overtime once again. McQuarrie’s picked up the nuances of the characters established in both MI3 and Ghost Protocol, allowing us a sense of familiarity with returning characters that means we don’t need to “get to know” them. Simon Pegg’s Benji has a significantly expanded role here (as he did with Ghost Protocol) and it’s fun to see the actor working his comedic skills in and around the action-packed moments of heart-stopping tension.

Cruise, meanwhile, fit back into Hunt’s character like he never left – it’s a role he can play in his sleep, and although you get the sense his character doesn’t “grow” or “mature” like many other recurring screen creations, it’s not that important whilst he’s hanging off the side of a plane, or holding his breath for three or four minutes, or engaging in a brutal car-slash-motorcycle chase, or any other feat of human endurance the script throws his way. Like Bond, Hunt is the thing around which all pivots, and whenever he’s not on the screen, people externally from him are focusing on him, so it makes the film feel like it’s centralized around a single character. Cruise’s co-stars, from Pegg to Ferguson to Rhames, provide excellent backup service to the film, giving their respective roles the gravitas and faux-seriousness needed to convey the world-ending seriousness demanded by this plot. 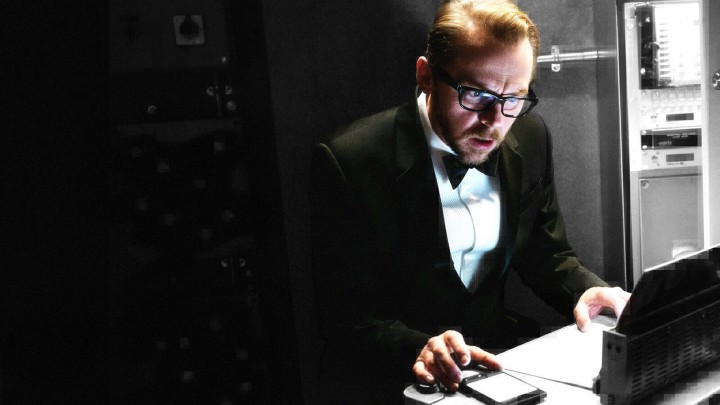 Make no mistake: Rogue Nation is a Tom Cruise movie, but like Ghost Protocol, the film works best when he’s forced to use his team, the ensemble surrounding him, to accomplish his end goal. This doesn’t make Hunt a weaker character, nor does it mitigate the quality of the cast playing second fiddle to Cruise’s stern-faced performance, but it serves to highlight the fact that Hunt isn’t the indestructible, omnipotent creature of heroism he was portrayed as in Mission Impossible 2. Cruise’s star wattage shines through in every scene; the dude is a rockstar at this kind of movie, and knows what it takes to sell the illusion. You’d never consider him for an Oscar here, but he does what’s demanded of the role and the film, and does it superbly.

Kudos too to Chris McQuarrie, who helms this with a solid eye and keen hand for action details. The film doesn’t deviate much from the template set out by Ghost Protocol’s aesthetic, making McQuarrie either a directorial chameleon or an outright plagiarist (I’m opting for the former), and his handle on the film’s rip-snorting action sequences is one of assured confidence. McQuarrie’s work on Jack Reacher lacked a certain “epicness”, being a relatively low-key action affair, yet here, with multiple sequences set in hugely complicated locations and demanding mucho public exposure, and as the film builds to its climax, there’s no faulting the ease with which McQuarrie slides into the chair vacated by Brad Bird.

The question hanging over Rogue Nation is whether or not it succeeds in its duty to excite and thrill audiences, and the latest entry into impossible missions does just that, with relish. Compelling plotting and typically life-or-death decisions, luck and fate combining to give the film a sense of skin-of-the-teeth adventure, Rogue Nation is a hell of good action flick in its own right, and a top-class Mission Impossible entry that, while perhaps not the best of the bunch (I still say MI3 is the best one to-date, largely off the back of Philip Seymour Hoffman’s searing central villain performance) it’s certainly a brilliant film in any case. Definitely worth your time.