Warning: this review contains discussion of elements of Nope’s plot that some may consider spoilers. Enter at your own risk.

Nope is likely to leave many venturing into its chilling charms with a high degree of “that was good, but WTF?” Incredible weird, Get Out and Us director Jordan Peele’s third feature film is a mix of prickly horror, terrifying sci-fi and boring family drama, led by the inestimable talents of Daniel Kaluuya and the always kooky Keke Palmer. It’s a weird film in that it sets up its downturned horror tension with precision and heft during the opening act, goes a little askew in the middle act, before plundering sense and reason for what I assume is Peele’s attempt to Independence Day the shit out of audiences as the film’s baffling and jaw-dropping climax overwhelms the senses. Maybe I’m confusing my expectations with what the film is able to deliver, and part of me considers Nope to be a spectacularly effective film in many of its disparate elements; as a whole, however, I’m inclined to think the film isn’t quite the home-run it wants to be so desperately. Also, what’s with the chimp? 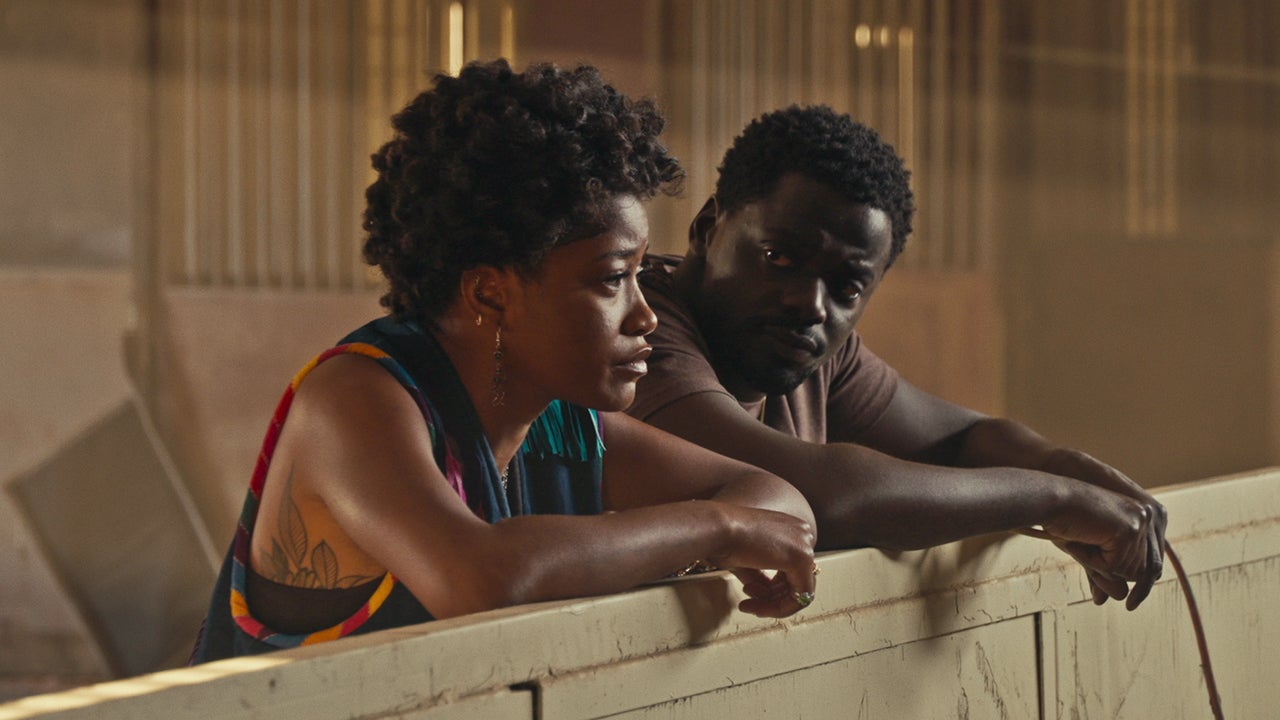 Hollywood horse-wranglers OJ Haywood (Daniel Kaluuya) and his sister Em (Keke Palmer) find their ranch struggling following the sudden and inexplicable death of their father, Otis (Keith David). A nearby cowboy show, run by former sitcom star Ricky “Jupe” Park (Steven Yeun) offers to buy their horses to help with their struggle. One evening, OJ is shocked to witness the presence of what appears to be an alien craft hiding in the clouds above the nearby mountains, occasionally swooping down to suck up a variety of organic life and spitting out all inorganic materials. Initially sceptical, nearby electronics store clerk Angel Torres (Brandon Perea) installs a series of security cameras in the hope of capturing footage of the UFO, however each time the craft approaches the power fails and nothing is recorded. OJ and Em even secure the services of legendary cinematographer Antlers Holst (Michael Wincott), who uses hand-cranked bespoke IMAX film cameras to try to document the phenomena. 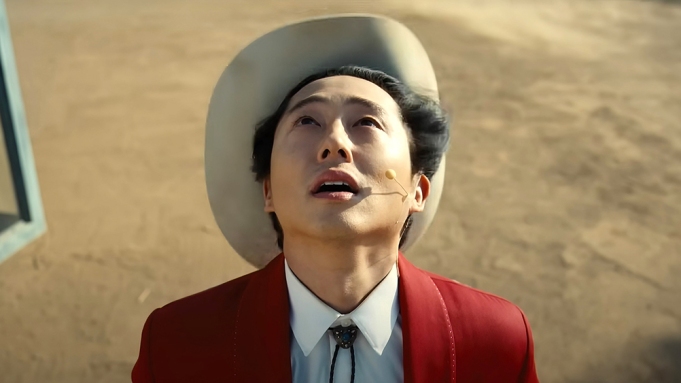 I had several problems with Nope, and I want to specify them first before I get to what I really, really liked. I have to admit that while Daniel Kaluuya is a highly respected Oscar-winning actor whose breakout performance in Get Out remains to this day perhaps his career-defining role, sometimes I get the sense that he’s absolutely bored shitless acting in front of a camera. The guy’s acting style wavers between docile and flaccid here, a thoroughly inert and lifeless leading performance beside his effervescent and bubbly sister Em, played by a delightfully full-tilt Keke Palmer. Contrasting the pair isn’t a struggle because both Kaluuya and Palmer’s roles are so diametrically opposed, yet the former is completely outshone by the latter in every single sense of the word. I’m sure this was how he was directed, but to keep an actor of Kaluuya’s ability (not that Jordan Peele is unfamiliar with him, given he led the way in Get Out, Peele’s debut feature film) restrained in such a manner felt like a bizarre creative choice. 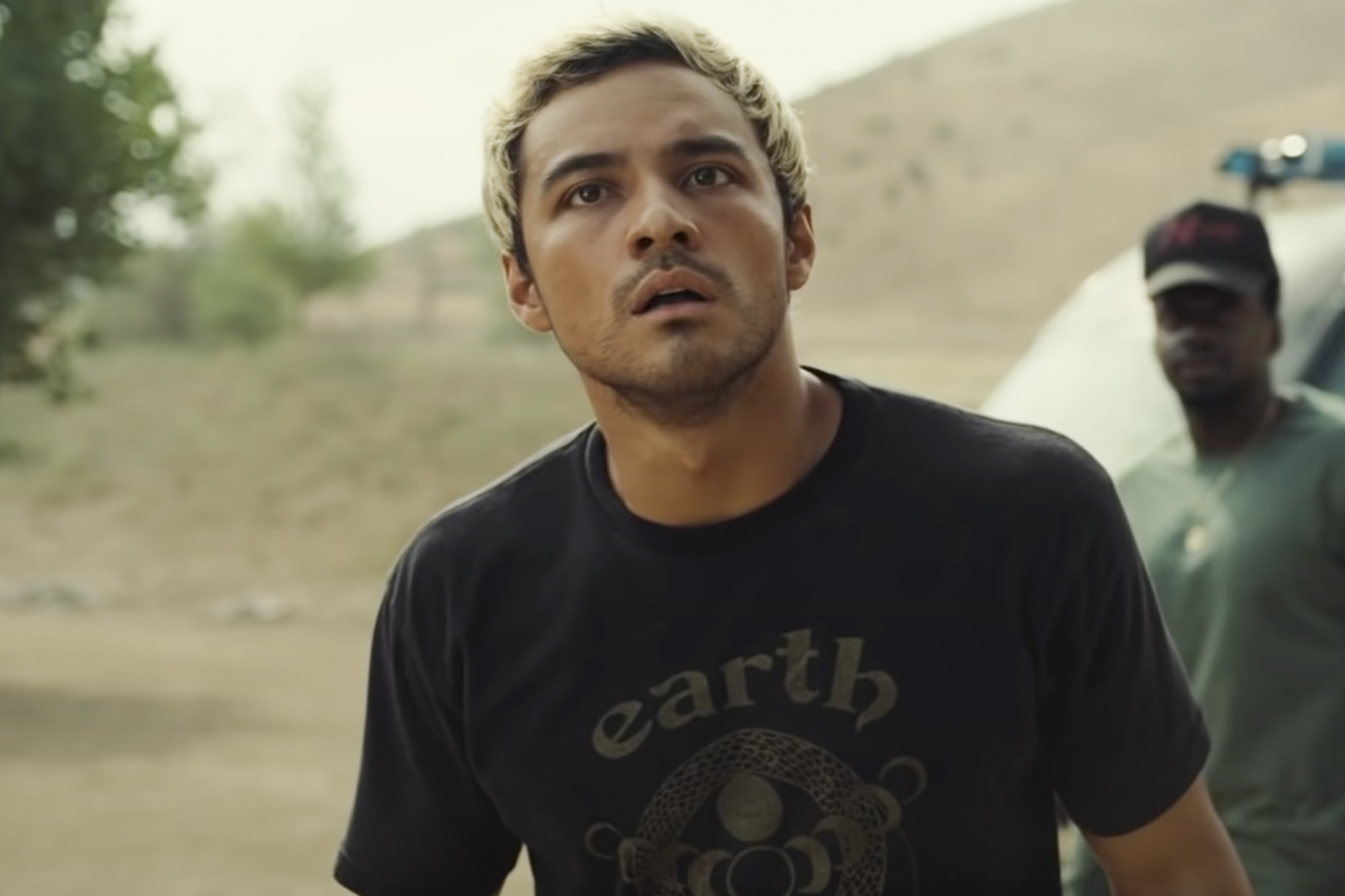 Second of my issues, and perhaps one that’s a little more confounding: there’s a subplot to Nope involving a sitcom chimpanzee that, for reasons never explained by the movie, goes on a murderous rampage on-set whilst filming and slaughters his entire on-screen cast, with the exception of a young Asian American child actor, who grows up to be Steven Yeun’s Jupe. There is absolutely no connection directly between the chimpanzee, Gordy (played by a motion-captured Terry Notary, known for his similar work in the recent Planet Of The Apes reboot), and the rest of the film other than this tangential exposition involving Jupe, nothing about which offers a salient reason to exist within Nope’s otherwise hugely atmospheric narrative. Remove the Gordy subplot, and the film wouldn’t even know it was missing. Weird. I guess Peele was trying to unsettle the audience? It works in that respect, but lacks resolution. I kept waiting for the connection to form, but it never arrived. 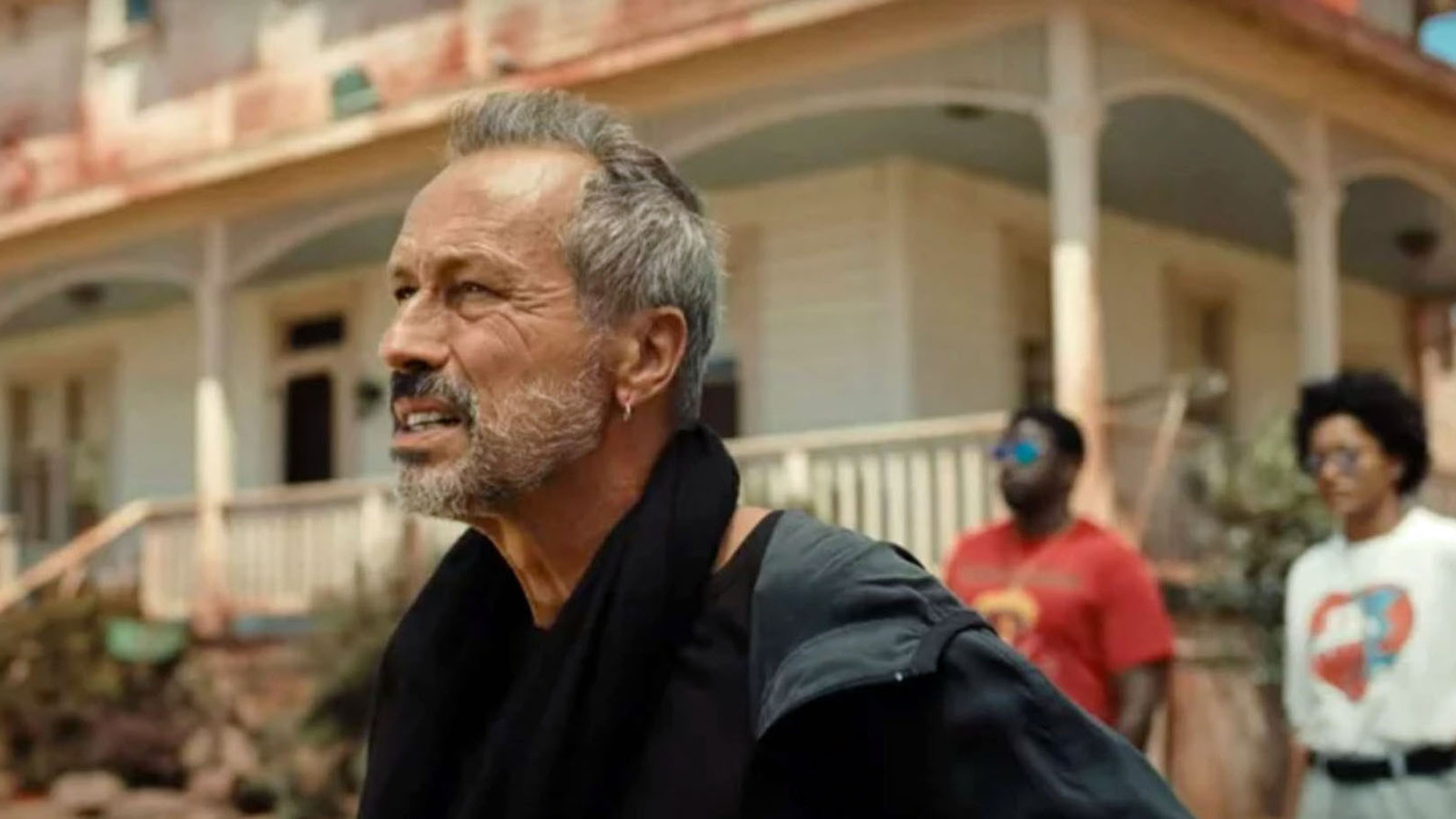 Other than these issues, I did enjoy Nope as an exercise in mind-bending terror. Peele once again works his “something in the peripheral vision” tension with a command of the camera and editing unrivalled by anyone else in modern horror. Not that Nope is horror in the gory, bloodletting sense of the word (although there is plenty of blood splattered across the frame, for sure); instead, Nope trades on Peele’s ability to get beneath the skin of the viewer and keep us off-balance, very much like Signs and Sixth Sense-era M Night Shyamalan before he went all commercial. You know, that sudden jarring movement in the corner of your eye, the shadowy formless figure emerging from the darkness, or the wailing, howling supernatural surround sound mix that is designed to keep you on the edge of your seat. At times Nope is unbearably tense, and Peele’s maximum impact framing and editorial choices certainly keep the audience guessing as to what might happen next. Peele is also a giant mystery box director, a little like JJ Abrams in the sense that he sets up these grand mental showcases and teases a reveal, a gentle or shocking revelation, as a master magician would hint at revealing his tricks. Few would argue that Peele can send a shiver down your spine as only a rare breed of filmmaker can. 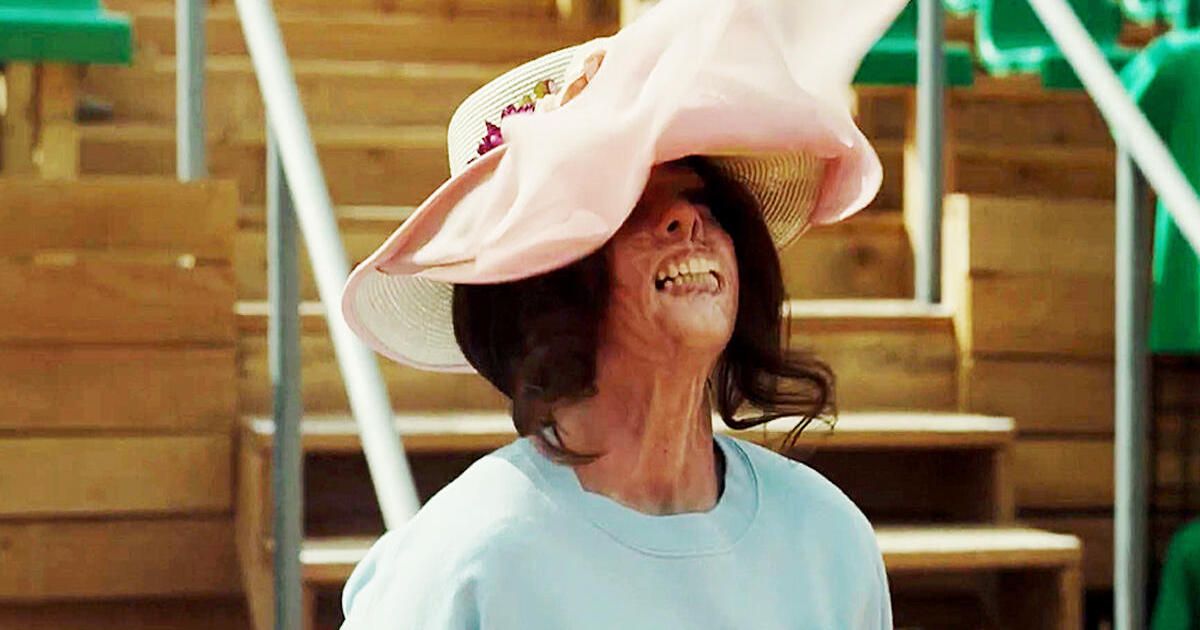 Generally, Nope has the omnipresent feeling of dread pulsing through it’s ET-like premise. An alien vessel sucking up animals, vegetables and spitting out minerals might feel passe by today’s standards but Peele envelops the film with the same kind of tension and terror I last felt in Spielberg’s War Of The Worlds. Am I comparing Jordan Peele to Steven Spielberg? Yes, I am. But where Spielberg might approach a story like Nope as a nostalgic fantasy or sci-fi wonderment, Peele’s horror aesthetic establishes the alien entity showcased by the film’s incredibly atmospheric final act as a legitimately heinous big screen villain of an unstoppable, implacable, unknowable nature. The story touches on historical notes – OJ and Em’s ancestor was involved in the production of the world’s first moving image, a galloping horse and rider captured in Animal Locomotion – which, thematically, finds a bit of an mindworm for the viewer as each of our characters’ past is brought thunderously into the present. The script is well written (Peele, again, gets sole credit) and generally well acted (for me the MVP of the film is Brandon Perea’s skittish Angel Torres), and production design on the movie is strong-to-solid. I really loved the design of the UFO, and how it morphed and changed into different levels of horror as the film progressed, although I did find the characters’ anthropomorphism of the vessel a touch too bizarre for my liking. 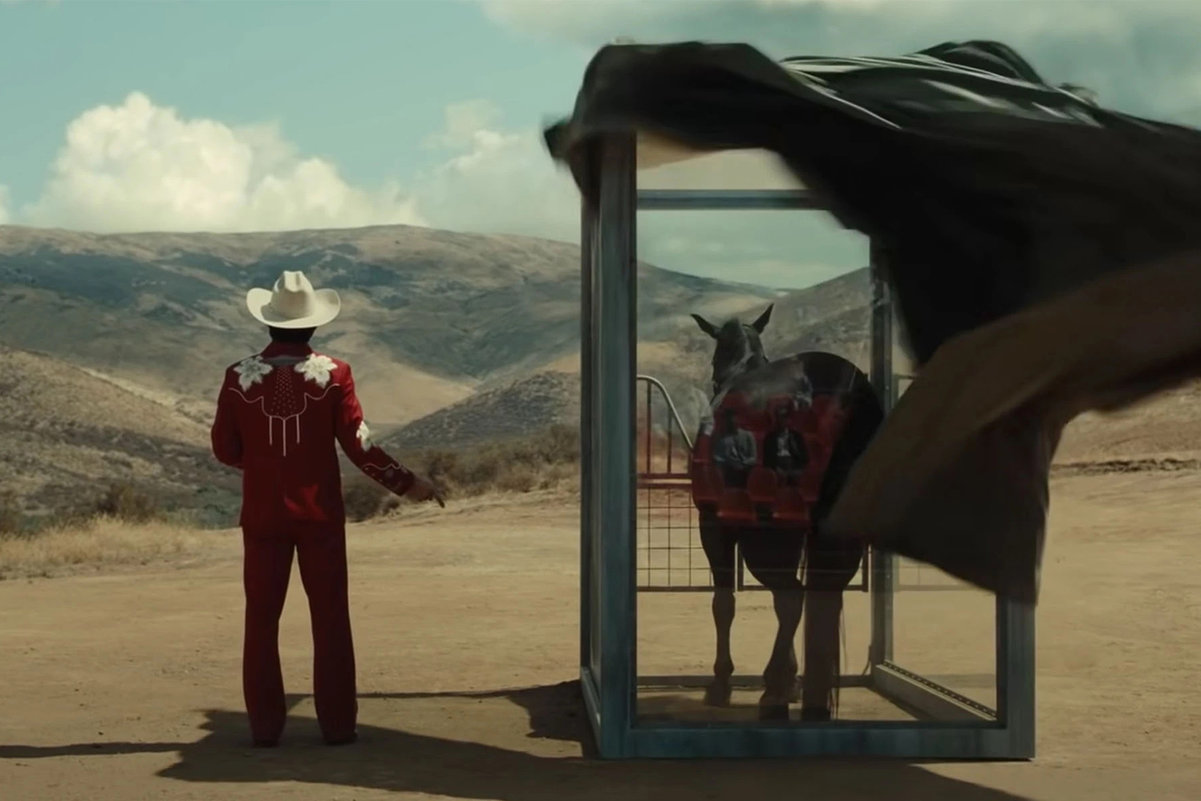 As I mentioned, the film does go a little off the rails in its third act; for as strong as the film’s opening half was in building up the mystery and tension of any given scenario, I found Nope’s climax really leaned into the preposterous at times, and often contradicting the film’s own internal logic. Comparatively minor, sure, but enough to drag me out of the movie a little. I also found the film a little too long, too. The mid-section of the film felt a touch too protracted, too leisurely paced, by contrast the superb opening act and the bonkers bananas finale, and at 130 minutes there are times when you feel every minute. Thankfully, those times aren’t enough to ruin the pleasures of Nope’s egalitarian horrors, as Peele’s convoluted and uneven climax kicks into high gear. It’s enjoyably kitschy at times, and nothing if not evocative for the design work afforded the alien entity, but some of the creative and narrative choices in the film are very much a matter of taste, tastes I wasn’t always keen on. 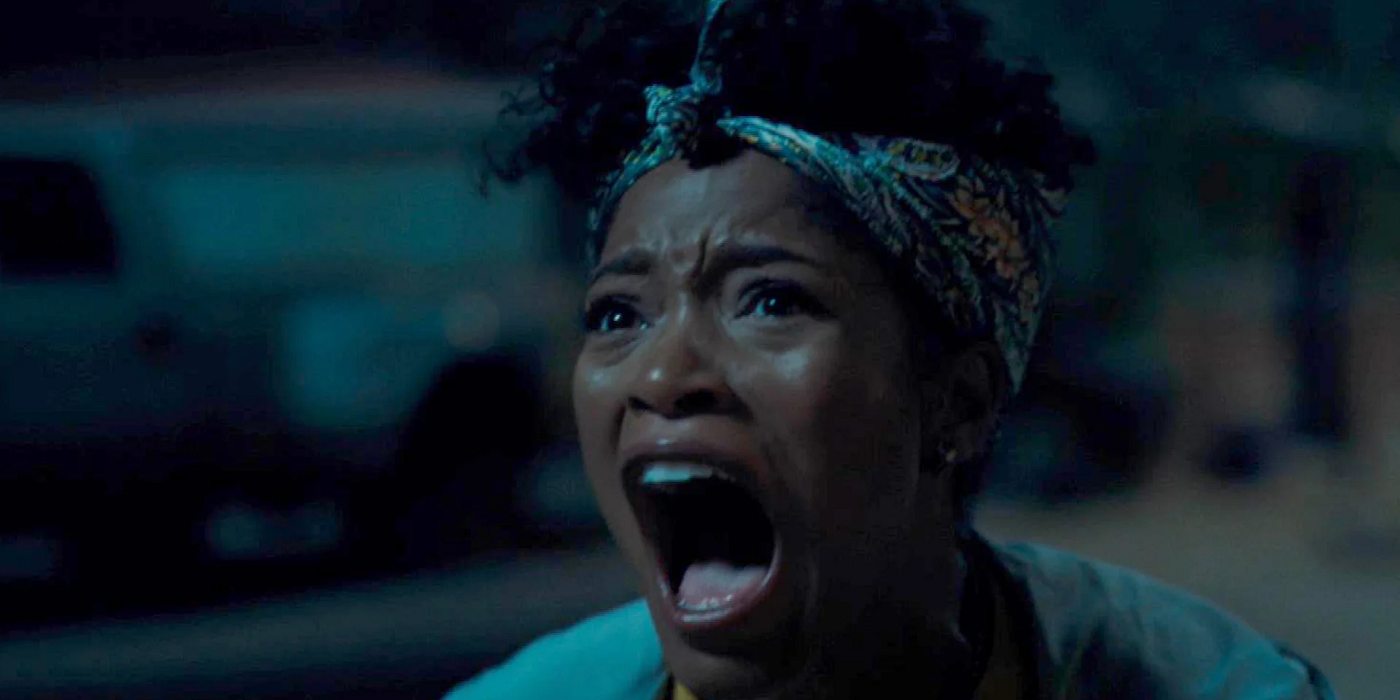 Look, Nope is a hugely effective sci-fi horror mish-mash that is obviously too weird for its own good, containing subplots and storylines that are quite literally dead-ends within the larger context of the movie. Peele’s effectiveness as a director is when he’s dealing with centrally humanist notions of terror, and Nope steps a touch too far outside this wheelhouse leaving the director stranded with style-over-substance visuals in the film’s latter stages. That said, I really did enjoy this – despite my earlier criticisms, which lean more to personal taste than technically specific issues – and can thoroughly recommend it for fans of the ultra-rare breed of sci-fi horror drama genre projects that offer something different to the typically bombastic mainstream fare. Caveats in place, Nope is a massive yep from me.