The sixth and hopefully final film in the Jurassic hexalogy attempts to reinvigorate audiences jaded by two previous big-budget attempts to keep the ailing franchise bellowing and utterly misses the mark. Jurassic World: Dominion is less a compelling Jurassic entry and more a homogeneous tentpole spectacle film, lacking compelling characters or interesting plot, coping with these deficits by throwing big-budget visual effects together with Chris Pratt’s emotionless face and Colin Trevorrow’s bombastic action. The film might tick all the boxes on a technical level, but there’s a problem with Dominion no amount of “getting the band back together” can overcome: a distinct lack of awe. Part of the lustre of Spielberg’s original Jurassic Park, and to a lesser degree his sour-tasting sequel, was the reverence the characters (and audience) had for their titular dinosaur co-stars, manifesting in a sense of archaeological breathlessness these ancient animals engendered. The dinosaurs in Jurassic Park, The Lost World and even Jurassic Park III seemed truly mythical, as both Spielberg and second sequel director Joe Johnson imbued their monstrous drawcards with legendary status within the construct of John Hammond’s abortive capitalist ideology. The conspicuously corporatized Jurassic World, and its immediate sequel Fallen Kingdom, moved from this homily-inspired aesthetic and deeper into the darker ubiquity of man’s inability to not look at something without seeing dollar signs, and further away from the thing that made the earlier films inspired; that the dinosaurs in Jurassic Park were effectively isolated from humanity, and consequently something to be feared. Both Jurassic World and Fallen Kingdom fell into the trap of playing to more bombastic blockbuster tropes than their predecessors to the degree they became indistinguishable from their cinematic contemporaries, the concept of the Jurassic franchise diluted in search of the same dollars from audiences as those depicted within the films themselves.

Dominion plays on the crucial linchpin of Trevorrow, who returns to the directors chair after Fallen Kingdom helmer JA Bayona departed to shoot episodes of Amazon’s The Lord Of The Rings: The Rings of Power series, managing to scoop franchise OG’s Sam Neill, Laura Dern and Jeff Goldblum into reprising their roles once more. To its credit, seeing Dern, Neill and Goldblum back as a trio again makes Dominion’s simplistic plot feel a little less like whack-a-mole nostalgia porn, giving the three characters far more agency than any of the World trilogy players – Pratt, Bryce Dallas Howard, Isabella Sermon, for example – although even they tend to be suffocated by Trevorrow’s poorly written repurposing of the original film here. The plot is a twin thread of capitalist greed in the form of billionaire businessman Lewis Dodgson (Campbell Scott), head of BioSyn, releasing genetically modified locusts which inadvertently threatens to tip the world’s food production on its head, leading to research scientist Ellie Sattler (Laura Dern) to team up with former flame Alan Grant (Sam Neill, who looks for all the world like a budget-version of Indiana Jones here) to infiltrate a secretive compound and obtain proof of malfeasance. The second plot thread has former Jurassic World dino-trainer Owen Grady (Chris Pratt) and Claire Dearing (Bryce Dallas Howard) living deep in the woods with young Maise Lockwood (Isabella Sermon), a clone with perfect genetics, trying to keep her secret from people hunting her for profit. After both Maisie and the offspring of velociraptor Blue are stolen by poachers, Owen and Claire track them to a seller in Malta where they meet rebellious pilot Kayla Watts (DeWanda Wise), who helps them follow the trail to BioSyn headquarters where Dodgson’s grand plan is revealed. 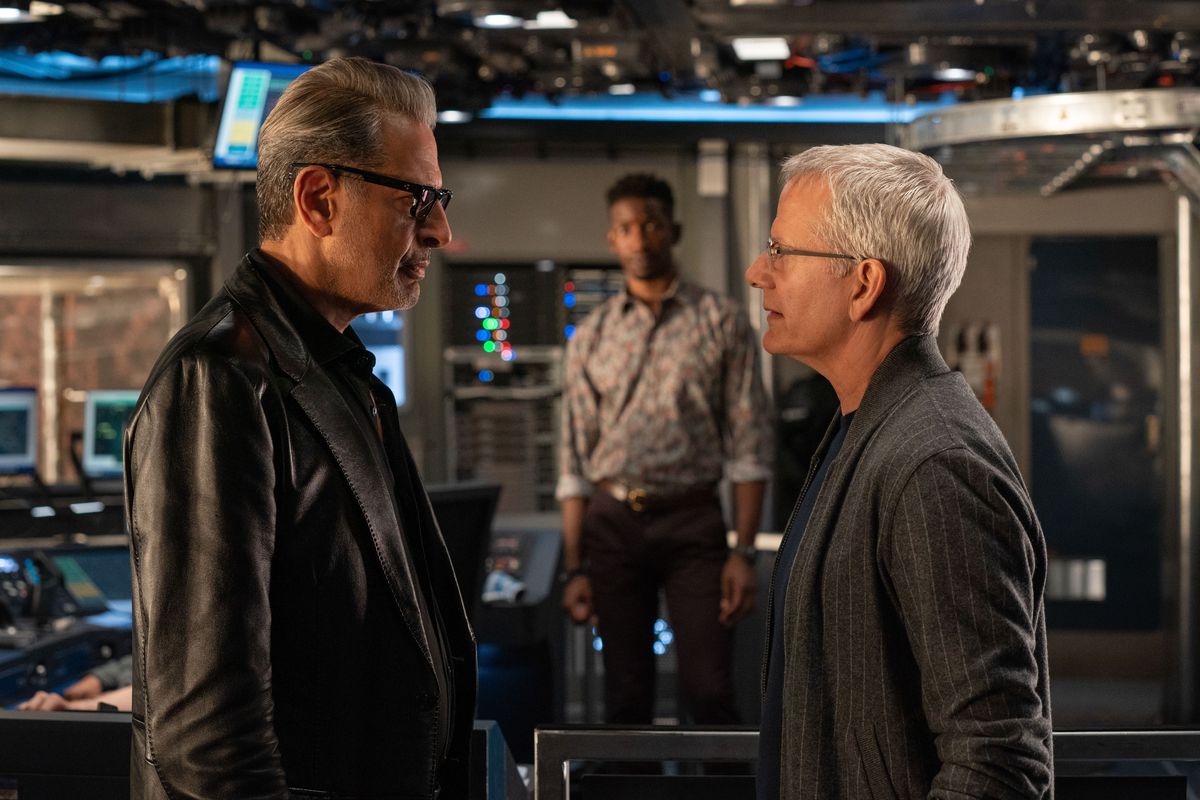 As generic as they come, Dominion’s climactic resolution to the Jurassic World trilogy is as insipidly bland as it is terrifically shot. In terms of its technical prowess the film wants for very little – visual effects both practical and digital are faultless, cinematography is breath-taking, the score from Michael Giacchino is appropriately thunderous whilst simultaneously reprising John Williams’ evocative cues from the original movie, and the frantic action sequences – although nonsensical – are thrilling in a sideshow theme-park kind of way that is engaging without being memorable, so kudos to editor Mark Sanger for eking out what little interest there is to be had with this thinly cobbled narrative. If you approach Dominion purely as throwaway summer blockbusting fare there’s a chance you’ll likely come out having had an exciting time, even if you can’t quite remember why you were so excited. All the parts are here for a rousing success, and at least a rip-roaring adventure with these lost world former earthly inhabitants now run riot across the globe, thanks to the events of Fallen Kingdom. If only the parts came together with any sense of wonder to them; Dominion is thrilling in the moment but ultimately as unsatisfying as lukewarm popcorn. 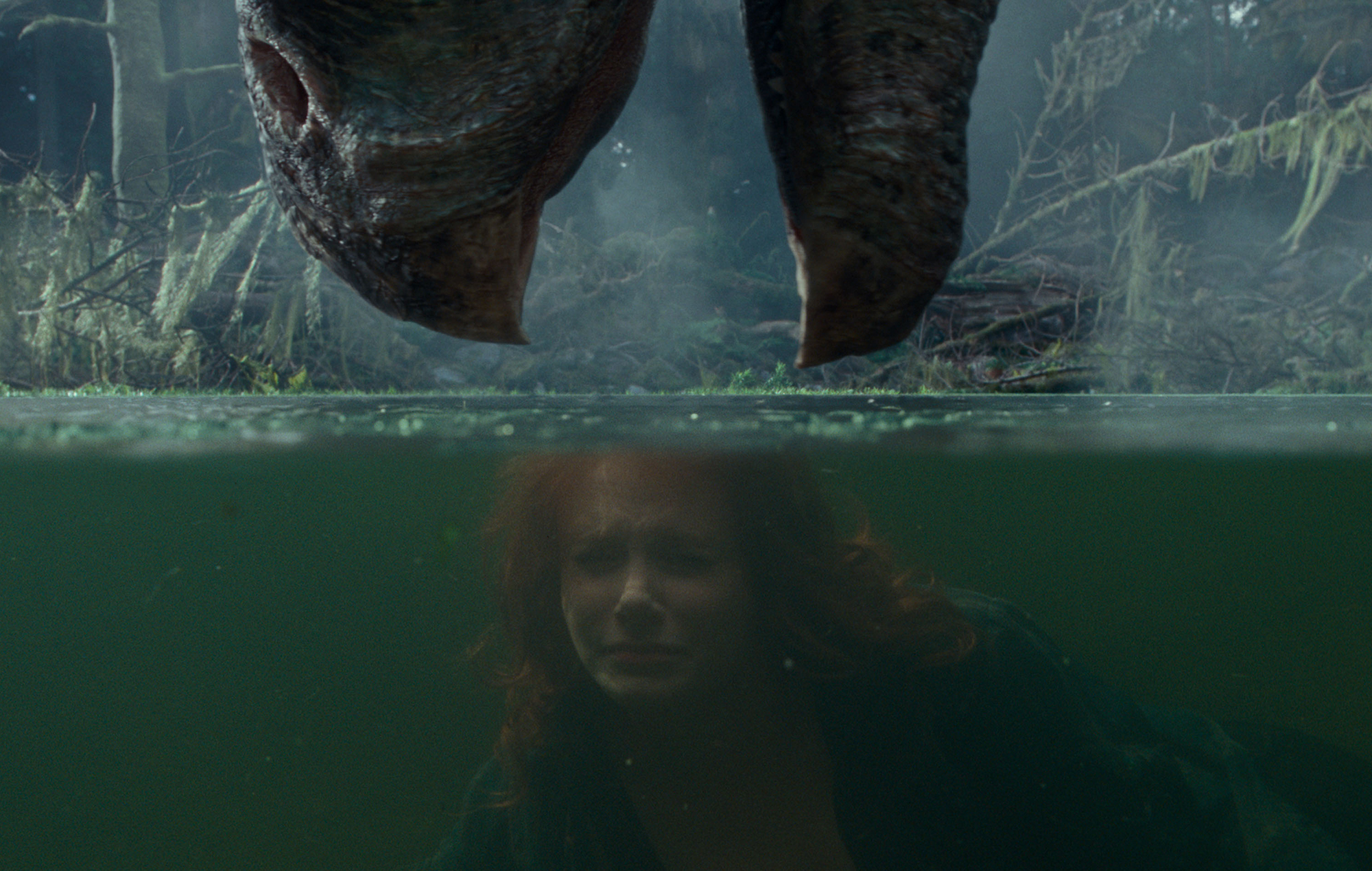 My central criticisms of Jurassic World Dominion lay directly at the feet of this remarkably ineffective screenplay, co-written by Trevorrow and Emily Carmichael, the latter of whom has built a solid career directing short films before finding footing on both this film and the Pacific Rim sequel as a writer. The screenplay seems to get lost in trying to tie up the major plot points of the previous two films, and add in the returning Dern, Neill and Goldblum at the same time, and isn’t able to do either with any worthwhile justification. The way the film tries to shoehorn in the original film’s key threesome feels incongruously handled, and an unnatural addition to a story that by rights had no business putting them in there in the first place. The fact that Dominion is seen as the “closing chapter” of the entire franchise makes their inclusion less organic and more a studio mandate, which Trevorrow’s direction ineffectively tries to hide. The script jumps through hoops to bring both Sattler and Grant back into the franchise in an organic manner, settling instead for some hurried and muddied sidebar plot that’s badly mangled in the final edit. In terms of the storyline involving Chris Pratt and Bryce Dallas Howard, both of whom look completely worn out by being contracted to appear in this against their better judgement, Dominion loses us almost instantly. Pratt and Howard’s characters have essentially kidnapped a young girl and are holding her isolated from people keen to track her down – the girl is a clone and somehow BD Wong’s irritatingly omnipresent Dr Wu thinks that will help solve the problem of genetically modified locusts destroying America’s foodbowl regions – which isn’t as intriguing a prospect as you might imagine. There’s a subtext pang of parental nostalgia here that echoes a lot of Spielberg’s filmography in many ways, if only Trevorrow didn’t mishandle it. Trevorrow understands spectacle, sure, and delivers some rousing dinosaur action – and tips the hat to Spielberg’s original film in a number of meta ways, including at one point having Laura Dern remove her glasses in a similar shaky-shocked manner to Sam Neill’s from the original film – but he is terrible at character development and social examination. The film’s shitty Steve Jobs avatar, portrayed by a poorly serviced Campbell Scott, is yet another wealthy businessman out to make a buck but finding that handling genetic modifications and a continent full of dinosaurs a little too much to adequately achieve, and his motivations within the context of the film are opaque at best, ludicrous at worst. Delivering a villain with such mediocrity is ruinous to Dominion’s chances of being memorable in any way at all – we’ve all seen countless CG dinosaurs and creatures since Jurassic Park’s record-setting debut, and the filmmakers seem to think that’s all we still need, instead of compelling characters or at least a motivated villain asking conflicted ethical or moral equations to ruminate upon. Dominion doesn’t have that. Like, at all. 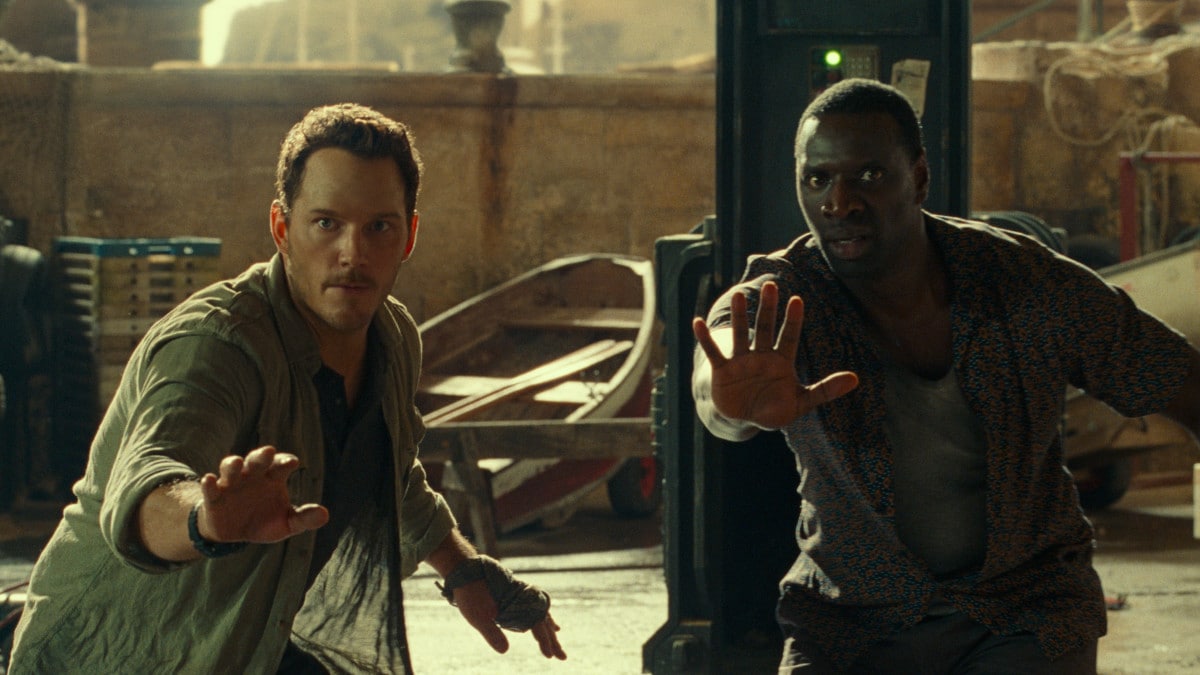 When it’s fumbling the ball with a confusing central inciting incident, Dominion also decides now might be a great time to introduce an entirely new character without actually making her worthwhile. DeWanda Wise brings her game to the terribly written pilot role of Kayla Watts, a character so obviously included to allow our characters to span the globe relatively quickly, and while the actress is cool enough on screen, the film wastes her entirely. She also appears without a single motivating factor whatsoever – a rebel pilot smuggling illegal animals across global borders suddenly grows a conscience the moment she sees a mysterious young girl carted off by a waiting truck? Please. The leaps in logic in the character of Kayla Watts are never explained, which is disappointing. To be honest, when the character first appeared on screen I half expected the writers to have brought back Ian Malcolm’s adopted daughter (Kelly, played by Vanessa Lee Chester) from The Lost World, somehow tying her back into this nostalgic retread, which would have been a total surprise and actually pretty awesome. Sadly, nobody in the writers room thought of that. Instead, here’s a brand new character with little-to-no time to develop her beyond a generic, sassy archetype that never succeeds as a character.

Second-guessing the creators is fraught with danger but I’ll offer my two cents. Had they chosen one of the two distinct narratives within Dominion and excised the other, the film might have been a little more emotionally resonant. Pratt and Howard’s story arc from Jurassic World and Fallen Kingdom is nowhere near as interesting as the ones involving Alan Grant or Ian Malcolm from previous films, but the modern day audience would at least be invested solely in them, and follow their plot through to its natural conclusion. Or, have the film focus on Grant, Sattler and Malcolm purely as a coda to their storylines in the original trilogy and maybe bring back other franchise players – Alessandro Nivola, maybe, from JPIII, or Arianna Richards and Joseph Mazzello from the first film? If you’re going to go back in time (ha!) why not go all out? My favourite idea for this movie, however, would have been to return to a technique modern directors fail to utilise often enough, something Spielberg used superbly in his two original films: restraint. In Jurassic Park he used the dino reveals sparingly, keeping the bestial creatures hidden or obscured until it was time to terrify the audience. Dominion – and all of the Jurassic World films – are kitchen sink movies in this regard, throwing dozens and dozens of CG effects at the screen to hopefully hide how un-carefully the plot, characters and overall motives for the film have been constructed. The audience is never terrified these days because we always see what’s coming. Colin Trevorrow’s inability to hide his surprises or obscure the dinosaurs turns them from frightening creatures to generic, joyless artifice in the blink of an eye. As a major Hollywood blockbuster Jurassic World Dominion meets all the KPI’s and box-office standards for a solid, entertaining piece of popcorn entertainment. What it doesn’t do, however, is meet all the required standards for a film bearing the Jurassic Park name. It wisely taps into the nostalgia factor to keep the audience invested but the jig is up – Hollywood has failed to maintain the awe and wonder of dinosaurs living among us, and as prescient as this ethical dilemma might be in today’s churn-and-burn age the script isn’t clever enough to really hone in on crucial themes, themes given a higher value in both Jurassic Park and The Lost World, but sadly missing in the films beyond them. There’s a couple of decent action sequences (a thrilling truck chase through a Maltese metropolis is diverting for a while), surprisingly few dinosaur-vs-dinosaur action sequences for a franchise with such prestige, and the fun of seeing old faces once more, but a confusing plot, meandering character arcs and distinct been-there-done-that tone makes Dominion quite the disappointing experience.