Dino-carnage returns to the screens with Jurassic World: Fallen Kingdom, the second instalment in a planned second trilogy in the Jurassic franchise, and in many regards it merely continues the vague monster movie archetypes we’ve seen before without stretching them in new directions. Tackling themes of ethics, animal activism and unbridled naturalistic primal rage, Fallen Kingdom’s rollercoaster aesthetic opens strong and thunders to a tumultuous conclusion that’s neither credibly refreshing nor enthusiastically dull. It’s a play-by-play carbon copy of all-too-familiar monster movie themes here, only muddled up and mixed around to try and trick the viewer. Does it work? Yeah, often enough to warrant applause. Worryingly, however, the film’s familiarity probably won’t hold it in good stead for future rewatches. 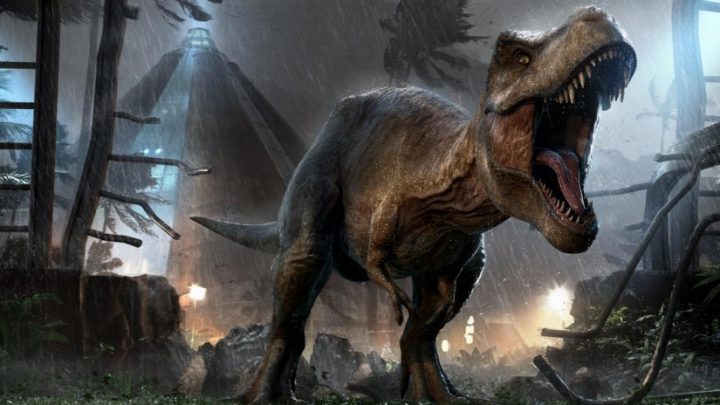 Three years after the events of Jurassic World, the island of Islar Nublar is about to be destroyed by it’s now-active volcano; Claire Dearing (Bruce Dallas Howard), now working as a dino rights activist, hopes to rescue as many of the animals as she can before the eruption, and after being seconded by former InGen business partner Benjamin Lockwood (James Cromwell), she recruits former Navy veteran and animal behaviourist Owen Grady (Chris Pratt) to save his pet velociraptor Blue. No sooner are they on the island, however, than team specialist Ken Wheatley (Ted Levine) betrays them to bring the animals back for the nefarious purposes of Lockwood’s assistant Eli Mills (Rafe Spall). He plans on unleashing a genetically modified “indoraptor” as a weapon of war: a weapon sold to the highest bidder. 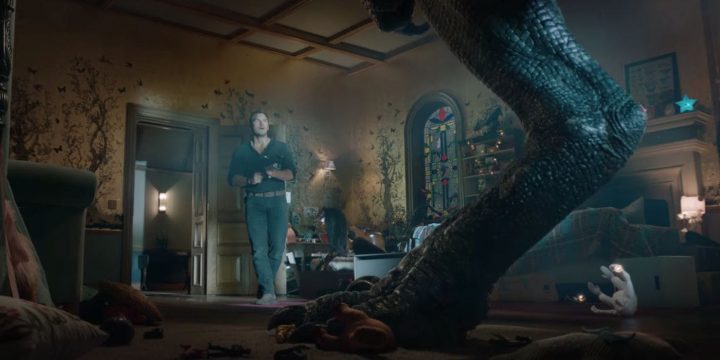 It’s become something of a running gag that every film in the Jurassic Park franchise simply retreads the same basic premise of Steven Spielberg’s captivating original: a bunch of humans make their way to an isolated island populated by no-longer-extinct genetically modified dinosaurs, hoping to achieve some kind of noble mission, only to find themselves dino-food for the hungry beasties and having to find a way to escape said island with all limbs (and life) intact. As a franchise, Jurassic Park has been mauled critically as a series of diminishing returns, and although Jurassic World offered at least a popcorn munching return to form for the saurian saga, sadly Fallen Kingdom retreads similar ground too often to mark itself as a turning point for fans. I mean, how stupid do people have to be to go back to the well a fifth time? 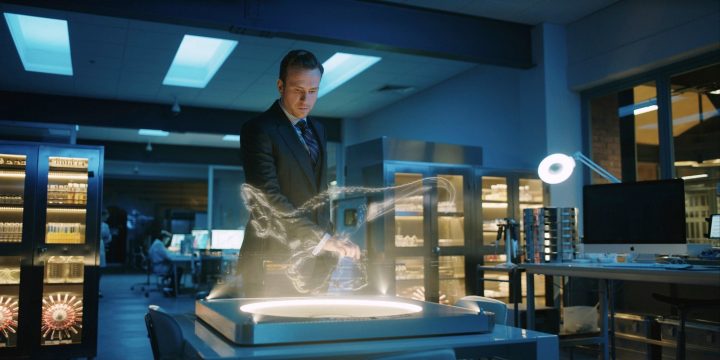 Pointlessly derivative, driven by dino-spectacle and a thin attachment to established stars Pratt and Dallas Howard, Fallen Kingdom is ably helmed by incoming director JA Bayona (The Impossible) from a screenplay by Colin Trevorrow and Derek Connolly, and if nothing else is perpetuates the same aesthetic Spielberg concocted back in 1993. Unfortunately, unlike Jurassic Park, this film fails to operate with the “tell, don’t show” showmanship we deserve, instead validating its existence through upping the ante with what amounts to super-dinosaurs, namely the indoraptor. Again, the catalogue of dinosaur favourites gets another run, with everything from T-Rex, stegosaurus, the brachiosaurs and ankylosaurus’ making significant center-screen appearances, and as you’d expect with a 2018 film production the visual effects involved in bringing the enormous creatures to life again are state of the freakin’ art. Within the bounds of an action adventure film such as this, there’s a number of narrow escapes and tripping of storytelling convention (right place, right time convenience is a staple in the Jurassic films) and Bayona’s direction is nothing if not stylish, although hardly revolutionary. 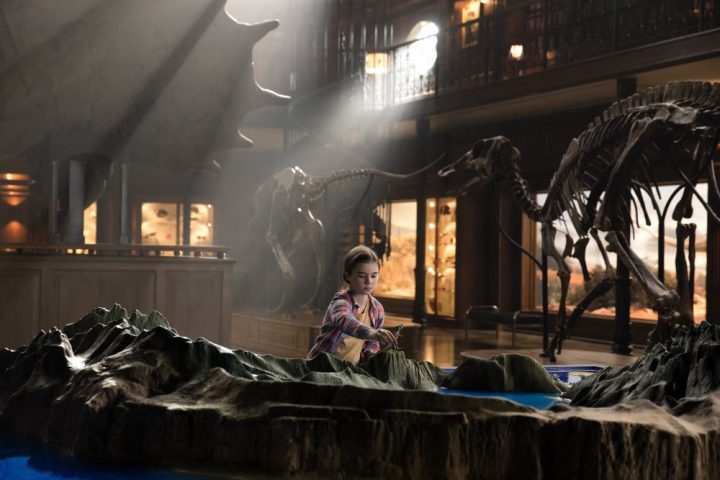 Brief comedic moments and hyperkinetic performance style is also the order of the day from the polished cast: led by Chris Pratt’s bland leading man act and Bryce Dallas Howard’s wet-eyed activist character arc, the film scatters prerequisite villain roles with credible performers like Rafe Spall and Ted Levine (as well as a couple of unsurprising twists, including BD Wong, again) and does its best to cram as much plot as it can into the 2-hour runtime. The youthful newcomers include Justice Smith and Daniella Pineda as members of Claire’s team, whilst young Isabella Sermon, as the young Lockwood ward around whom some of the film’s conniptive storytelling revolves (echoing back to Lex from the original film) is perhaps the best thing about the whole movie. Spotting Geraldine Chaplin, Toby Jones and the vastly underutilised Jeff Goldblum (in a brief opening prelude as the now silver-fox Ian Malcolm) is great but the lame homogeneity of the film’s preposterous conceit undercuts a lot of what Bayona and his team are tying to do. Gone is the simple fun of Jurassic Park as a big-budget thrill ride, and in its place is a film trying to actually say something; to its detriment, sadly. 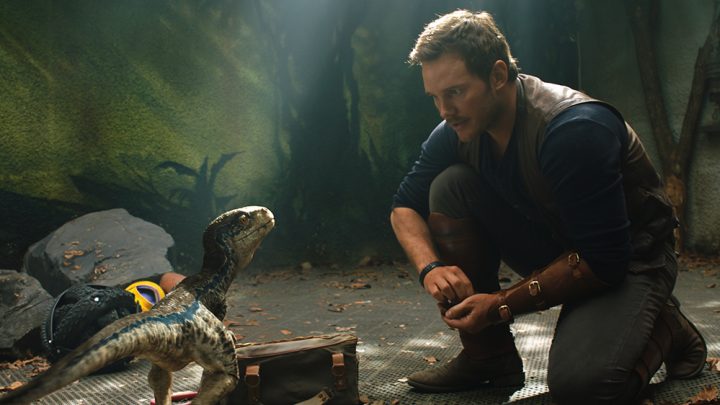 Blending multiple iterations of genre films through the years, including Frankenstein, Aliens, Planet of The Apes, a touch of Jaws and Deep Blue Sea (uniquely, Jurassic Park owes a lot to Spielberg’s seminal shark movie) as well as mountain of genre cliches, Fallen Kingdom parlays its high octane thrills into a withering mess of ideas, none of which form a strong cohesive whole. The undercurrent of ethical genetics feels slathered unevenly into dull spots in the script, and the gamut of kill scenes (yes, plenty of humans get eaten by ravenous raptors, don’t worry) is hit from every corner once the carnage uncorks. Wildly uneven, Fallen Kingdom’s sprawling focus invests us within the moment but not beyond, as the slow build from extravagant volcano explosion to intimate mansion-bound stalker thriller elicits some genuine moments of anxiety for the viewer, yet remains frustratingly distant. 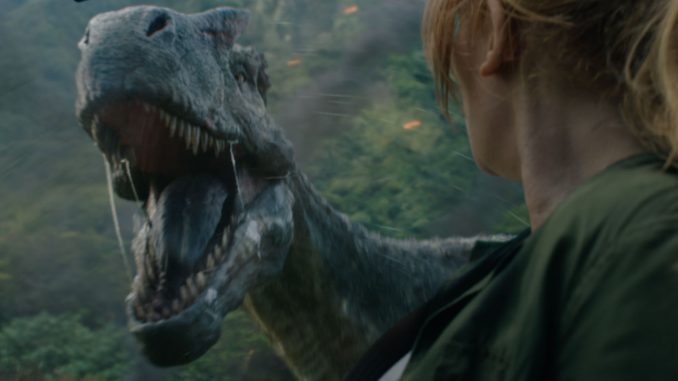 What doesn’t work so well within this context is the conflagration of plot points (and seeds of future instalments that are as obvious as the nose on your face) that threaten to overwhelm the senses, not to mention the reliance on overusing our favourite dinosaurs for visual gags. Returning to the well for this slick, potently stylish entry engenders far too much familiarity for it to work well as a stand-alone, and the exposition on offer for motivations and understanding never once give depth to character development of any kind. Both Pratt’s Owen Grady and Howard’s Claire Dearing are the same at the start as they are at the end: apparently, one doesn’t need to grow or develop as a person in order to appear in a major blockbuster these days. If you’re in it for the creatures, you’ll be well satisfied. For those hoping for a smidgen of depth or an acknowledgement of how far gone this franchise is by now, you’ll have to wait for the next instalment. Fallen Kingdom is indicative of its own title: the greatest self-own in modern blockbuster history.