Director :  Colin Trevorrow
Year Of Release :   2015
Principal Cast :  Chris Pratt, Bryce Dallas Howard, Vincent D’Onofrio, BD Wong, Ty Simpkins, Nick Robinson, Omar Sy, Irrfan Khan, Jake Johnson, Lauren Lapkus, Brian Tee, Katie McGrath, Judy Greer, Andy Buckley, Eric Edlestein.
Approx Running Time :  124 Minutes
Synopsis:  A new theme park is built on the original site of Jurassic Park. Everything is going well until the park’s newest attraction–a genetically modified giant stealth killing machine–escapes containment and goes on a killing spree.
What we think : Although it has Steven Spielberg’s stamp all over it, Jurassic World ends up as yet another cookie-cutter summer event film, lacking nuance or underlying heart – the characters (by-and-large) are stupid, the concept of the film is plausibly ridiculous, and the technical aspects of the CG and production design are first-rate. The dinosaurs chomp and munch their way through the human inhabitants of the film, many of whom run screaming through the jungle and darkness (natch), so it’s on par with the rest of the franchise’s iconic visual aesthetic. If nothing else, worth a look just to see Chris Pratt phoning it in as a character with zero personality whatsoever, and the newfangled Indominus Rex getting his/her time in the sun.

They never stopped to think if they should.

Three films later, and apparently people still haven’t worked out that you just don’t. f@ck. with. dinosaurs. Period. Apparently, stupid people still exist in the world of Jurassic Park, where fiddling with dino DNA has led to some pretty horrendous body counts in the name of financial windfalls. Commercial enterprises aside, Jurassic World, the third sequel to Spielberg’s 1993 original, now comes with ulterior motives, a post-9/11 militaristic application for the menacing monsters that, while I’m loathe to think is something the Pentagon would ever consider in their wildest dreams, somehow still isn’t beyond the bounds of human hubris to imagine as being a logical plot point. Jurassic World follows a largely Spielbergian template, and directed by Colin Trevorrow works even in spite of throw-at-the-screen human idiocy on display; it puts kids in danger, has vaguely “fractured family” overtones (the two kids here find their parents are getting a divorce, although this plot point isn’t dwelled upon nearly enough to warrant inclusion in the first place), and a wildlife expert is called in to evaluate the quality of a cage built to house an all-new dinosaur within the ubiquitous theme park. 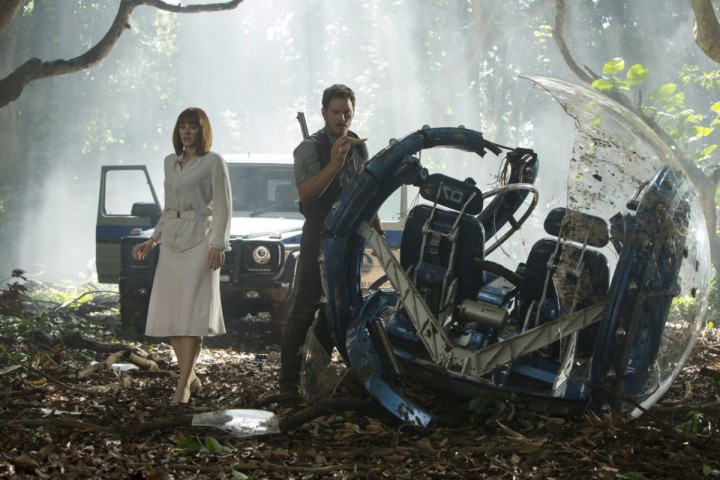 Two decades after the events of Jurassic Park, a new theme park as opened on the same island, now run by another corporate interest. Using dinosaurs bred by Dr Henry Wu (BD Wong – the only returning cast member from Jurassic Park’s previous three films), the park is run by operations manager Claire Dearing (Bryce Dallas Howard), who has to juggle her two recently arrived nephews – Zach (Nick Robinson) and Gray (Ty Simpkin) – whilst meeting with the park’s owner, Simon Misrani (Irrfan Khan), whose company now own the Jurassic World. Meanwhile, Owen Grady (Chris Pratt) is a velociraptor trainer (yeah, I know, it sounds better than it reads) working for InGen, who is called into check over the massive containment pen for a new, genetically spliced dinosaur named Indominus Rex, the exact makeup of which is kept under strictest need-to-know basis. So when the Indominus escapes its pen and goes on a rampage through the island, getting closer and closer to the theme park section and thousands of innocent people, the race is on to kill or capture Indominus before he can cause untold havoc and wreck the fortunes of Misrani Corporation.

Jurassic World is a scenario built on idiocy devised by lunacy and driven by greed. Profit was the werewolf at the door of Jurassic Park’s hubris-driven motivation, as was the fiest sequel, The Lost World, and it rears its head once more here. World’s main narrative thrust seems to be vaguely militaristic in nature, however, with the inclusion of Vincent D’Onofrio as a security operative for InGen, who has industrial espionage at the forefront of his arc, and it adds a shadowy, almost real-world pall over what it effectively a fantastical adventure tinged with bloodless thrills. Mind you, shifting the Jurassic franchise into the ‘real” world of the military industrial complex isn’t much of a stretch, it just doesn’t feel like it belongs here, that’s all.

Simply put, this whole movie is predicated on people being absolute assclowns about security, and never once looking at the franchise’s own history. The lesson’s of John Hammond’s original park weren’t learned, nor were the events of The Lost World’s San Diego T-Rex romp. Nope, instead, let’s just splice together the genes of a bunch of dinosaurs, some amphibian and reptilian DNA (and one massive plot twist surprise) and make some caaasshhh!!! Forehead slapping begins here. 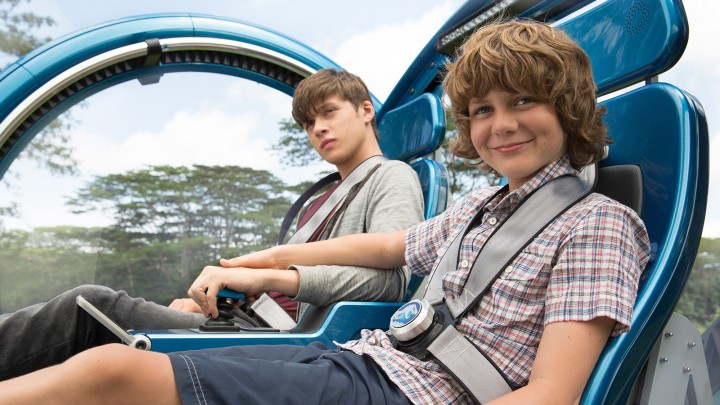 The writing on this film does seem to stretch credulity a lot, both in terms of what audiences are expected to swallow with regards to human safety and corporate accountability, not to mention that sticking a whole boatload of humans on an island (with no quick way off) together with a hundreds of huge, often carnivorous species of dinosaurs, is just asking for trouble, and although the cast do a solid job of portraying their roles, the laughable development on the how’s and why’s of Jurassic World’s reason for existing unravels rather quickly. Still, it’s better than nothing, I suppose.

While the film’s story seems convoluted to the point of being a moebius strip of contorted machinations, the main reason for watching the film – the dinosaurs – are held back for a considerably long time. Sure, it was cool in the first film, letting us wait and stew in anticipatory juices before the reveal of the T-Rex blew us out the back of the cinema, but we’re many decades on since then and familiar with what the dinosaurs all look like. Trevorrow’s liberal borrowing of the Spielberg restraint is well done – he doesn’t show us the Indominus Rex (or too many other dino’s outside of the raptors) until it’s absolutely needed, and then the film cuts loose. And, whereas most filmmakers would go all dino-porn with CG for the majority of the film (“hey, these folks don’t wanna see plot, they paid to see some dinosaurs!”), Trevorrow’s cannily holds back on the excess CG and sticks with a large amount of practical work (thank God!), giving Jurassic World a real heft that adds to the tension on the screen. 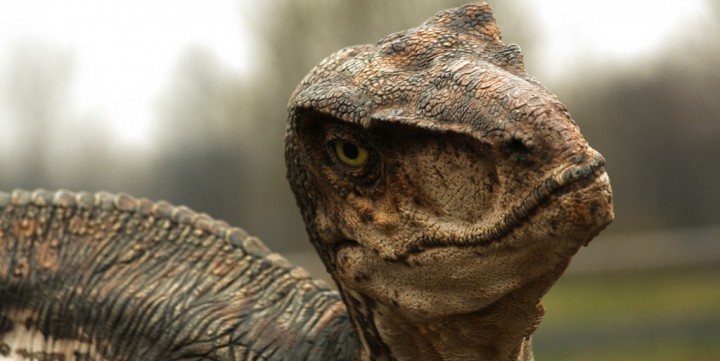 Poor Bryce Dallas Howard’s character, Claire, seems incongruously mixed into the plot. Part of her ice-cold demeanor is off, somehow, as if her “driven by profit” motivation for running the park has swallowed her entire life, and her byplay with Chris Pratt’s undemanding Owen is redolent of the abyssian holes within the script. How Bryce managed to get through the day spewing out much of her idiotic character’s lines without punching anyone, is hard to fathom. Pratt looks for all the world like a cross between Han Solo and Indiana Jones, with a small element of the first film’s Robert Muldoon thrown in for good measure. His character is the most bland of all here, with zero backstory (other than a brief romance with Howard’s Claire) and no emotional arc between his first scene and his last. Ty Simpkin and Nick Robinson play Claire’s nephews, sent to the park by their mother, a forlorn Judy Greer, and although there’s some weird parental divorce subplot within the opening act, it vanishes utterly by the time the dinosaurs all come to eat. Niether Simpkin or Robinson are afforded much by way of character development other than what we need to make them our “young heroes” of the film; they neither drive the plot, nor ask much of the audience. Hell, they’re merely canon fodder for constant dinosaur attack, and one could argue they are analogous to the first film’s Lexie and Tim, only nowhere near as charming.

Vincent D’Onofrio chews his scenery as the primary human antagonist, before a raptor eventually chews him (I mean, c’mon, you know it’s coming), while Irrfan Khan’s profit-driven-but-still-ethical CEO is opaquely uneven, in spite of the actor’s likeable screen presence. In an unexpected turn, BD Wong’s Dr Wu, who first explained the whole idea of genetically cloning dinosaurs back in Jurassic Park, returns as a thoroughly unlikeable version of his character, with motives beyond InGen and Misrani, which is something of a shift from how we saw him before. This caught my eye more than just about anything else, and had the film gone further with this plot development it might have cracked the story wide open to new potential – sadly, all it does it set up obviously future franchise plot devices – either the script-writers know something we don’t, or just didn’t care, but it’s never adequately explained. I guess we’ll see Wong turn up in whatever the next sequel has in store. 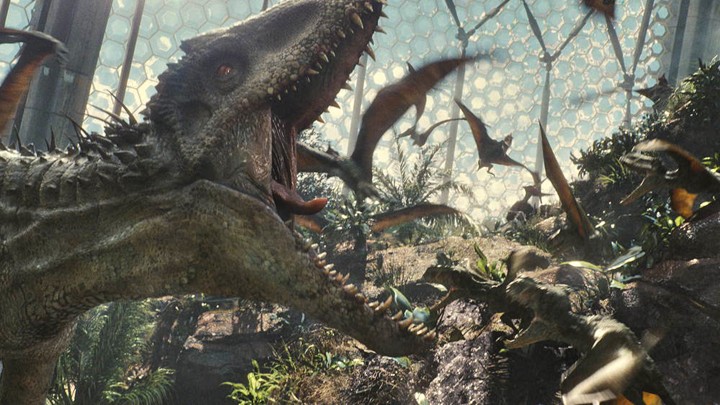 If you can overlook the laughable characters, the intestinal tract of a plot, and the scientific inaccuracy – the film’s vaunted problem with updating our knowledge of the dinosaurs depicted, where modern thinking is that raptors would have small feathers, is touched on in a line of dialogue – then you’ll probably have a great brain-in-neutral time with Jurassic World. Trevorrow handles the film’s action with aplomb, delivering slowly ratcheting thrills with solid style and a sense of pacing that’s both taut and frantic. Trevorrow’s sense of space isn’t as assured as, say, Spielberg’s, but he gives the film a sense of franchise-worthy familiarity. Nods to the original film are inserted (the film is set on the same island, Islar Nublar, so it makes sense) and callbacks of ideas propagated in the two previous sequels also crop up, so there’s no chance you’ll mistake this film for anything other than a Jurassic film.

Jurassic World is a fun ride, albeit not a very smart one. If I was a cynic, the film’s constant callbacks become almost too constant, and the dinosaur kills are largely bloodless compared to the other films; giant pterodactyls lift up the park’s visitors as they flee, the Indominus chews and swallows his way through a smorgasbord of multi-racial human buffet samplings, and while several of the film’s “bad guys” get their comeuppance in the traditional Hollywood manner, they somehow lack the resounding cheer-worthiness you’d expect from a summer blockbuster. But hey, it’s dinosaurs and lots of running, so it has to be fun, right?

The idea is cool, the execution is technically proficient, but the weird “you’re all stupid” vibe I had while watching these characters go about their business just sucked the life out of the film. It’s not a bad movie, and will entertain on many superficial levels, but it lacks both the charm and awe of the first film, or the kind of modern dino-terror we expect from franchises today. Jurassic World is solid, unremarkable B-movie fun that offers momentary relief from the daily grind, and turns out to be markedly better than both The Lost World and Jurassic Park III (for all its flaws, this film doesn’t have a talking dinosaur), so approach with optimism and a degree of exuberance and you’ll have a nice old time in this revamped World.