Hyper-discombobulating sci-fi drama action flick’s don’t come more discombobulating than Daniels’ Everything Everywhere All At Once, a film that takes the concept of a multiverse and splatters it all over the screen in a whirligog of colour, action and astonishing virtuosic storytelling. At times incredibly funny, more often than not incredibly fun, and resplendently bananas in the best possible way big-screen cinema can get, directors Dan Kwan and Daniel Scheinert (known collectively and hitherto referred to as “Daniels” in most marketing and promotional materials) offer a brain-bending journey across time, space and the infinitude of multiversal physics, notwithstanding an esoteric philosophical dissection on destiny and family, wrapped up in dazzling ideas, splendid acting performances – notably, Ke Huy Quan makes his mainstream return to the big screen, after a protracted absence following a brief stint with stardom in both Indiana Jones & The Temple of Doom and The Goonies as a child actor – and if you’ve read any of the superlative reviews in some parts you’d think the film was quite possibly the literal coming of Christ in cinematic form. Sadly, despite all this, I didn’t quite latch onto All At Once’s maternalistic narrative structure the way I so desperately wanted to, and with the film clocking in at a bladder-bursting 140 minutes by the time the third act swung into view I was desperately checking my watch. 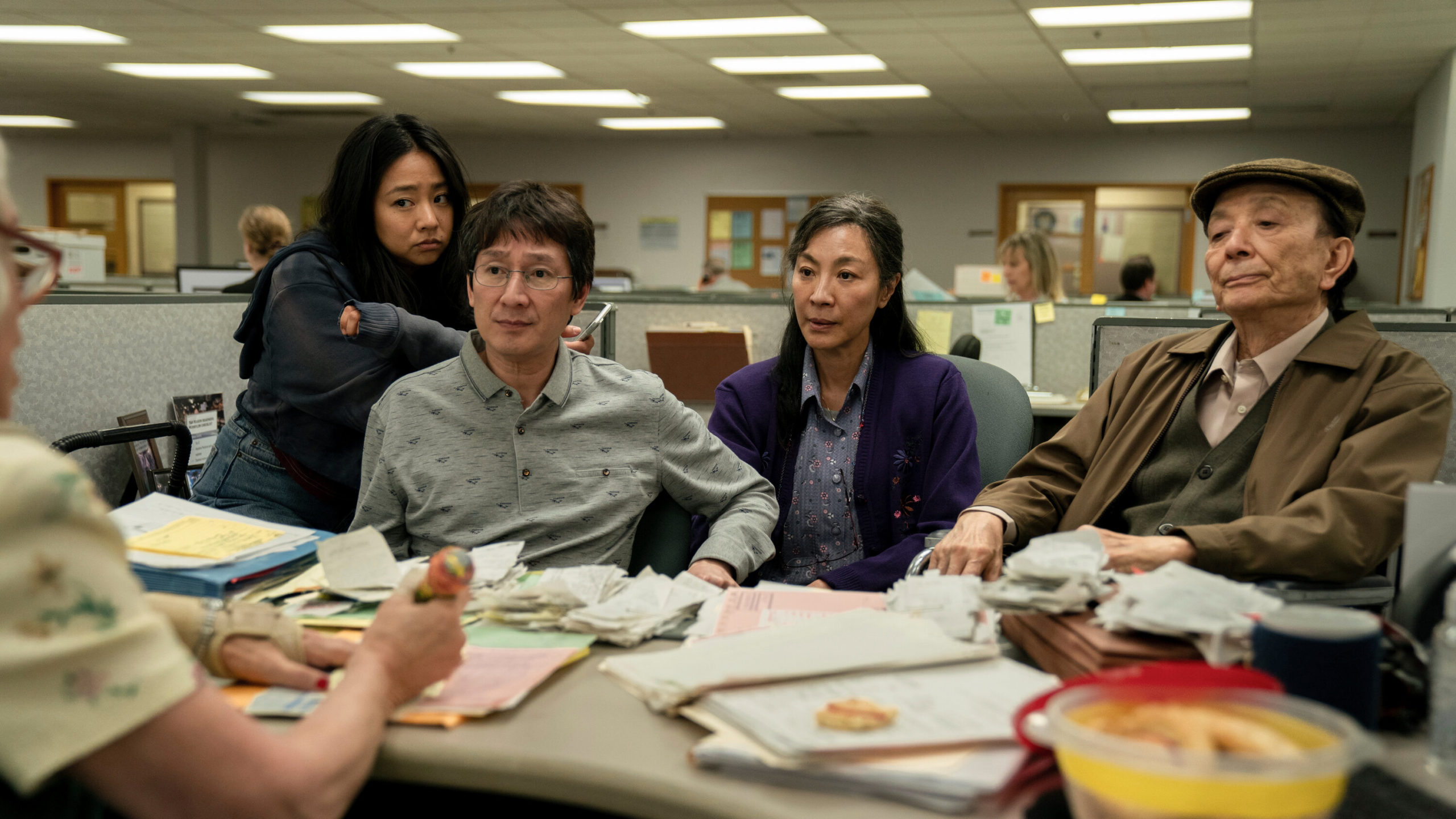 Evelyn Wang (Michelle Yeoh – Crouching Tiger Hidden Dragon) is a Chinese-American woman running a busy laundromat with husband Waymond (Ke Huy Quan). Their daughter, Joy (Stephanie Hsu) is dating another girl, Becky (Tallie Medel), while her father, Gong Gong (James Hong) is about to be audited by the IRS. Arriving at the IRS office, they are met by auditor Deidre (Jamie Lee Curtis), a belligerent and arrogant agency inspector who intends to see Gong Gong dragged through the mud, much to Evelyn’s chagrin. When her husband’s body is temporarily taken over by an Alpha Waymond from an alternative universe, who beseeches her to aid him in his fight against the evil multiverse entity Jobu Tupaki (also Stephanie Hsu), Evelyn is given a glimpse into an infinite number of universes in which she, Waymond and Joy’s fates are entirely intertwined. Realising that Jobu Tupaki threatens all of existence, Evelyn and Alpha Waymond must fight against numerous minions and henchmen to stop the multiverse from collapsing upon itself. I wanted to much to like Everything Everywhere All At Once, but I just found it deafeningly over the top. Moments of crystal-clear humour abound within, including the gut-busting riff on Ratatouille that has to be seen to be believed, and in terms of performance I cannot fault a single aspect of the film’s milieu. I just found it all overwrought and over-long to the point of insanity, especially my own. Daniels have crafted a film that is very specifically constructed to work in many different ways; one part family drama, one part husband-and-wife love story, wrapped in an enveloping sci-fi premise that works despite the film’s obvious budget limitations (Everything Everywhere All At Once was made for a reputed budget of $25m, and at the time of writing had just tipped over $70m in global box-office returns) and in many respect I ought to have adored this thing. It sits right inside my cinematic wheelhouse, offering everything a fan of this kind of material might want. I just found it too oblique, too scattered for my liking, perhaps tempered by the luminous Michelle Yeoh delivering a career-best performance, abetted by the terrific Stephanie Hsu in what I can only hope is her breakout Hollywood role. 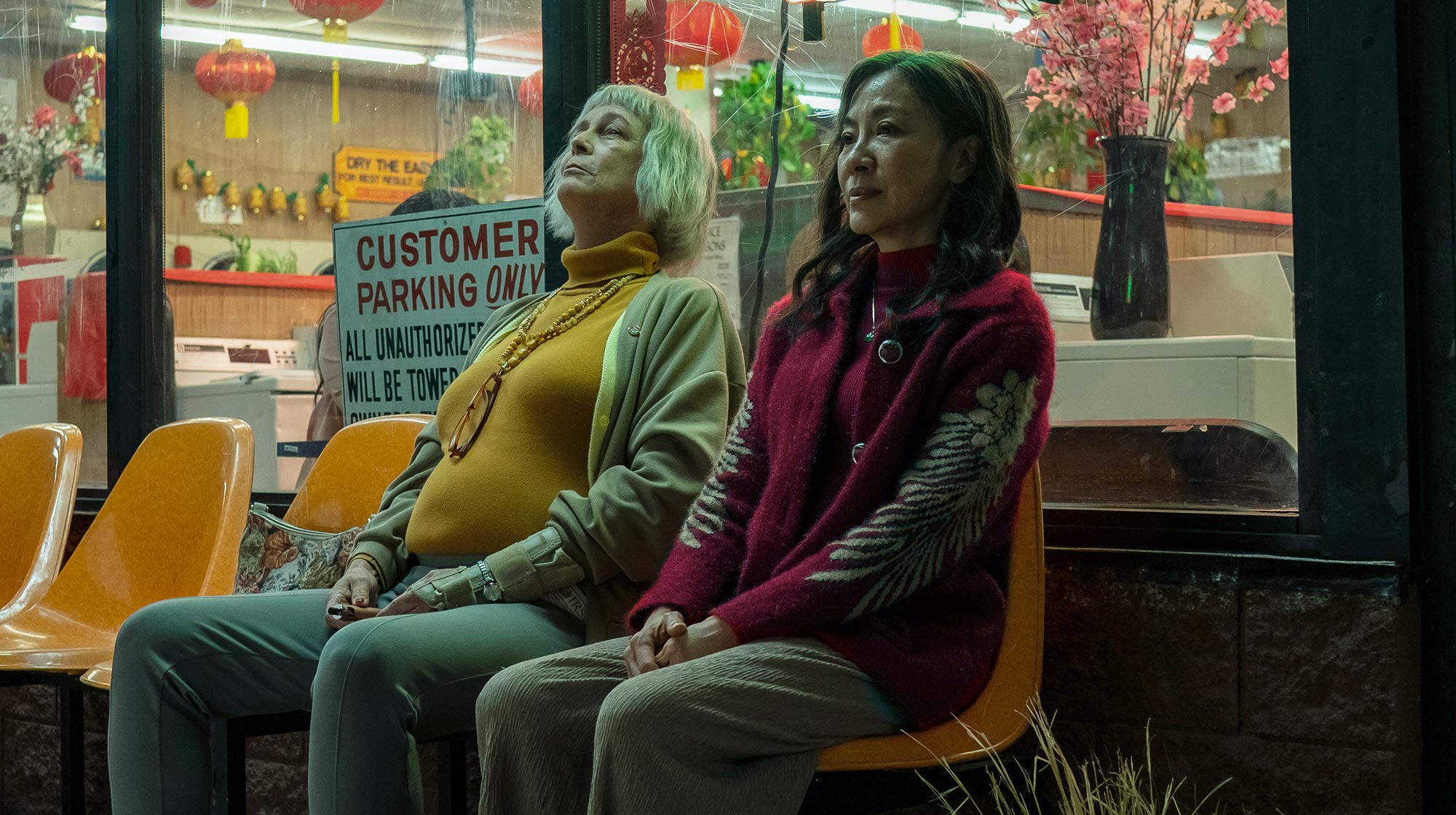 The idea of parallel worlds in which alternative versions of ourselves isn’t something new to anyone who has ever watched a sci-fi show (Star Trek or Doctor Who in particular). Daniels, who wrote the screenplay as well as directing, have concocted quite the complicated premise on which to base their family-centric drama, a blend of comedic, wry, sarcastic and utterly tear-jerking parental interpersonal hopefulness we all wish for our own children, and at times I didn’t know whether to laugh or cry at the Evelyn/Joy conflicts present throughout. The film skips between the urgently dramatic and the bonkers fantastical elements with such pace you may find it a touch too much to take in at first blush – I think Everything Everywhere All At Once is a film that will bear multiple viewings to catch all the sight-gags, references and witty banter thrown at the screen – and I think this schizophrenic approach to story and style is where the film lost me a little. Think Doctor Who filtered through Guy Ritchie’s hyperbolic camerawork mixed with a Christopher Nolan intellectualism and you might start to approach the insane level of creativity Daniels throw at their film, a film so off the wall crazy it makes Swiss Army Man look like a Merchant/Ivory production. I mentioned Michelle Yeoh and Stephanie Hsu as standout performers in this piece, I should also mention that Ke Huy Quan, who manages to still speak with that squeaky Short Round voice even now, shoulders the masculine aspects of the film’s family-oriented plotting, and does it well. He makes a solid action star in his own right, as well, alongside Yeoh herself who is no stranger to cinematic fisticuffs. Yeoh, however, is tasked with a more nuanced role in this film; that of a heartbroken mother desperate to rekindle the relationship she sees as failing between her and her daughter Joy. The chemistry between Yeoh and Quan, despite an age difference of nearly a decade, is sparkling and easily the most “aww shucks” aspect of a film filled with squee-worthy moments of delicious writing. Jamie Lee Curtis’ brusque IRS lady is quite the turn from an actress best known as the scream queen from Halloween, while James Hong has a blast playing the creepy, devilishly motivated Gong Gong, with Harry Shum Jr, Jenny Slate and Tallie Medel finding solid work as supporting characters. 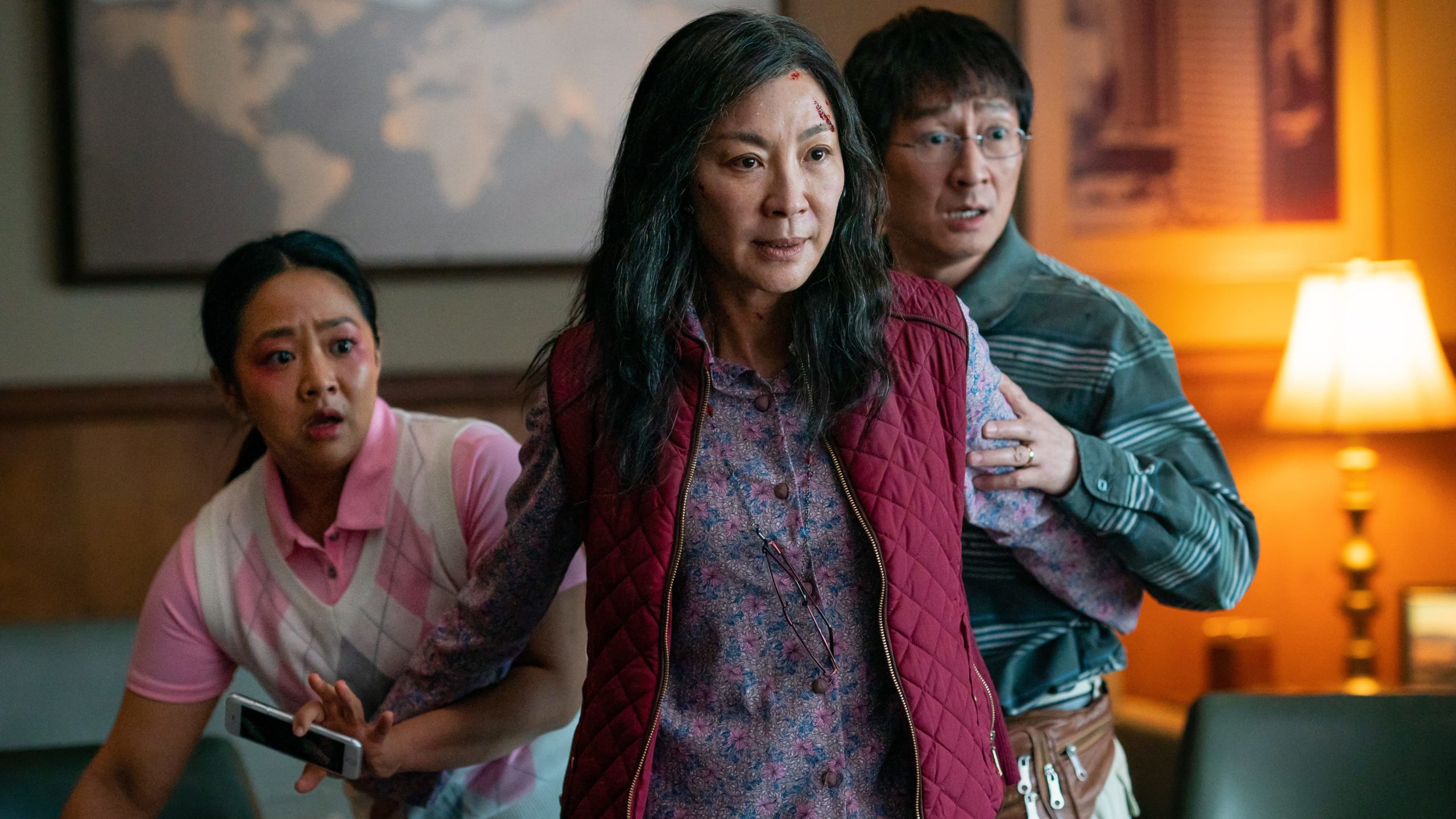 Distributed by A24, a minor independent film label known for its obscure and non-profligate film projects, Everything Everywhere All At Once makes the most of its conspicuously small budget with inventive visuals and terrific use of a variety of visual effects. The film’s deus ex machina, a swirling “everything bagel” at the center of Jobu Tupaki’s mission to destroy the multiverse, is both laughably asinine and incredibly creative, and the variety of ways Waymond and Evelyn “verse-jump” to gain skills and knowledge from outside our universe is depicted with incredible skill and veracity by directors with a keen visual style; make no mistake, there are chuckles and rib-tickling laughs to be had here, I just wish I’d found the dramatic elements of the film a little more engaging. I shouldn’t quibble: films such as this don’t come along every day, and we should all be watching more of these kinds of out-of-left-field projects from rising star filmmakers. Everything Everywhere All At Once is easily one of the years best (or most entertaining) movies from a production, direction and performative standpoint: having said that, I just wish it had been forty minutes shorter or a little less bursting-at-the-seams bananas.