Absurd Australian-produced actioner Interceptor won’t win any points for intelligence, and it certainly wont rank on anyone’s “best of” list at the end of the year, but in a dumber-than-a-box-of-rocks way this cheap, predictably silly Under Siege ripoff scores high on the C-movie scale of entertainment. Led by an almost indecipherable Elsa Pataky, wife of executive producer Chris Hemsworth (who also cameos, duh), and a bland-as-a-brick soap-star-turned-movie-hunk Luke Bracey, Matthew Reilly’s Interceptor pits an all-at-sea military heroine against the stupidest “smartest man alive” with enough preposterous exposition, nonsensical character development and join-the-dots plotting Australian production values can buy. It’s as if Asylum finally had a budget of more than six figures to sink into a movie, and while local industry stalwarts such as Stuart Beattie (who, on a completely unrelated note, is credited as a writer on concurrently screening Disney+ Star Wars show Obi-Wan Kenobi), Wymwood composer Michael Lira, as well as a smattering of notable Australian screen talent, all do their best to elevate this low-budget chucklefest, sadly the film skirts that “so bad it’s good” sub-sub-subgenre and is found all too often wanting. 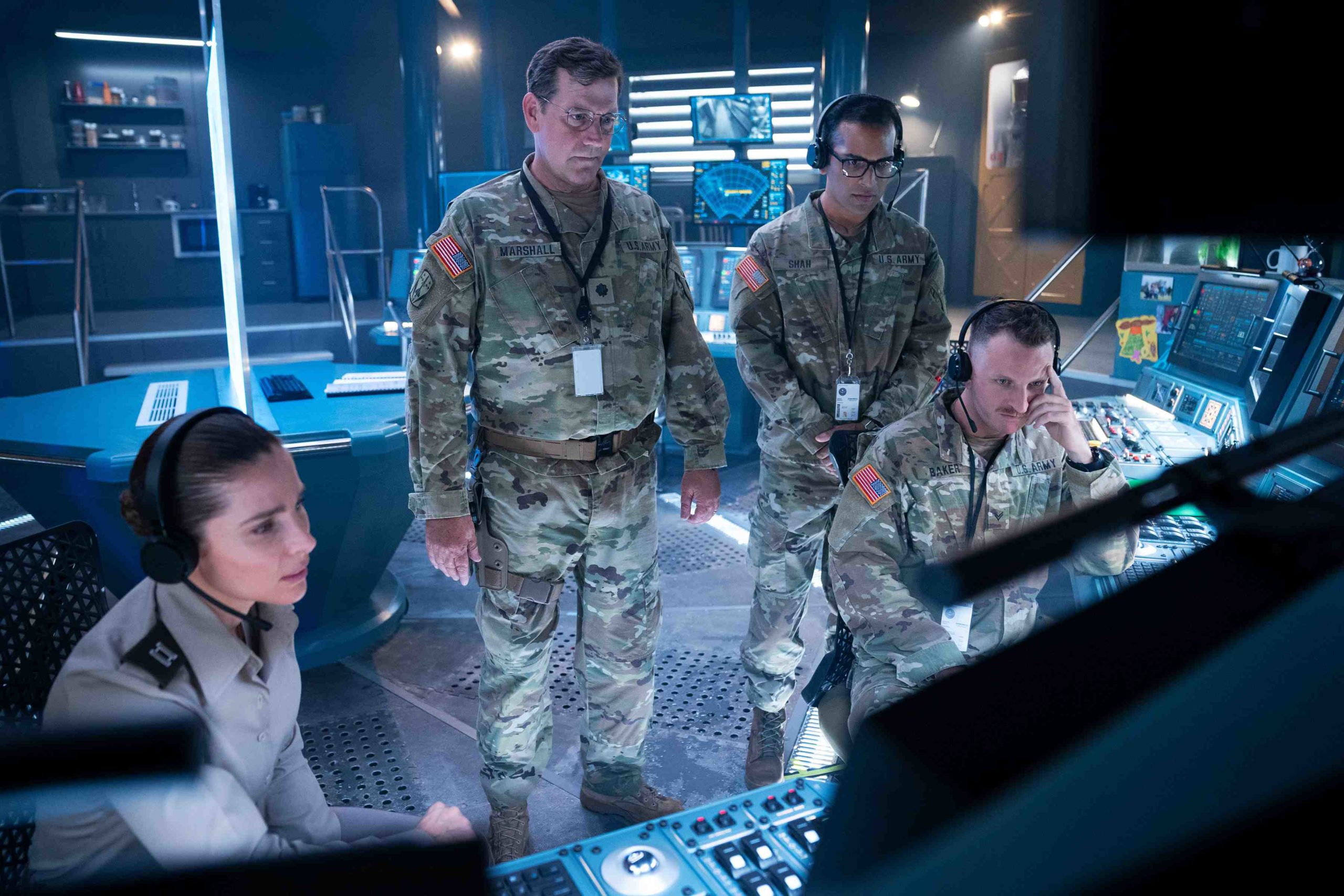 Pataky stars as square-jawed Captain JJ Collins, a redoubtable military officer whose recent troubled past has led to her assignment aboard a deep-sea base where the sole mission ist to thwart a nuclear attach on American soil. The premise involves supposed “interceptor” missiles which would shoot down incoming nuclear warheads, something sadistic mercenary Alexander Kessel (Bracey) wants to prevent: apparently sixteen stolen nuclear missiles are set to be launched at multiple American cities and Kessel wants to sink the seabase to the bottom of the ocean floor. Aided by timid Corporal Ruhal Shah (Mayen Mehta) and betrayed by the devious Beaver Baker (Aaron Glenane), Collins must use all her ingenuity to stop a nuclear attack even if it means sacrificing those near and dear to her. 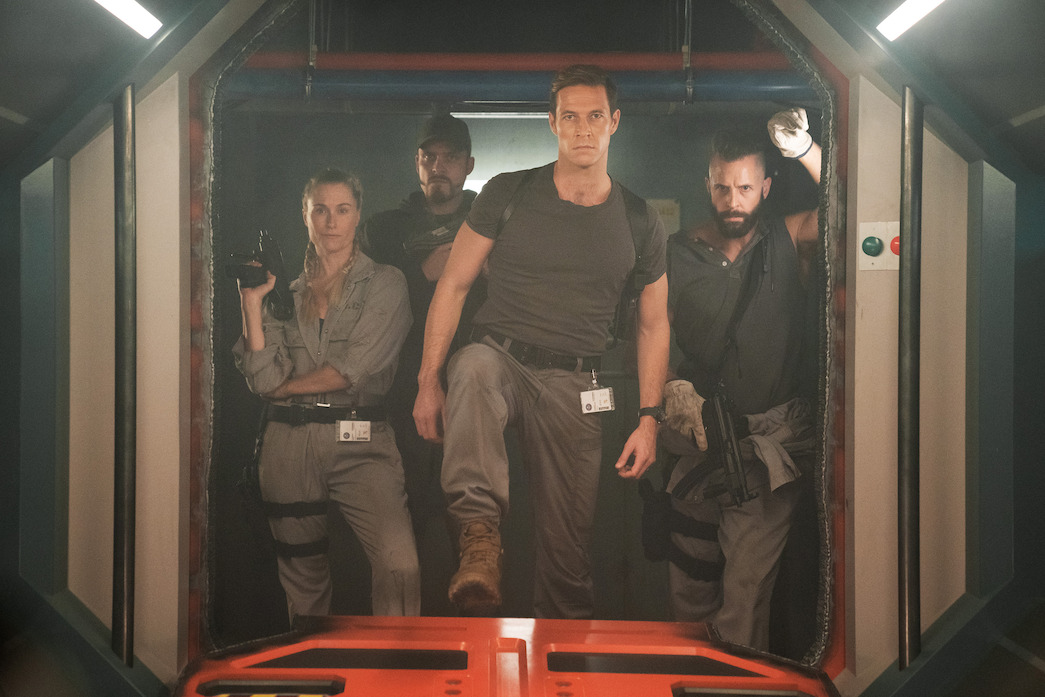 If her husband can do it, why not her, right? Elsa Pataky’s famous marriage to Chris Hemsworth, who himself has stepped away from the Marvel Cinematic Universe on occasion to a decidedly dull filmography (cough Black Hat, Extraction, Men in Black: International cough), obviously offered her an opportunity to headline her own possible franchise character; I’m not saying nepotism in Hollywood works, but I’m also not not saying it. Pataky isn’t an actress of any note, aside from her regular supporting role in the better Fast & Furious films (that’s Fast Five through to F8 of The Furious), and Interceptor isn’t going to do her career in front of the cameras any good at all, with a near fatally flawed reliance on her thick Spanish accent to deliver garble-mouthed dialogue threatening to ruin what should have been easy-cheesy silly action fun. 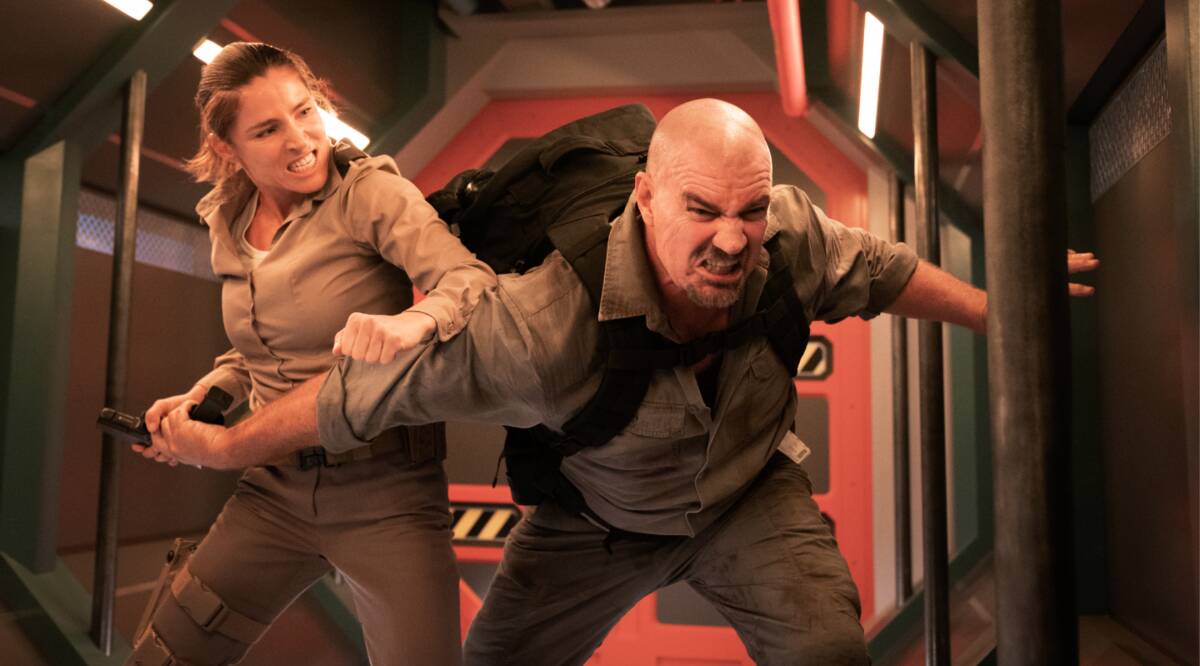 Her character, JJ Collins, is your typically ubiquitous hardassed military type, taking no shit, punching first, and more than capable of going toe-to-toe with the various henchmen (and henchwomen) the film deigns to throw at her. It’s an obvious mixture of Die Hard’s John McClane and Under Siege’s Casey Ryback, trying to mine humanity and ever-capable feminism and collide them into a sweaty, bloody musculature able to achieve some truly superhuman feats of endurance. None the least is having to put up with Luke Bracey doing the worst machiavellian Bad Guy impression ever committed to the screen. Pataky’s thick Spanish accent really gets in the way here, her opportunities to crack wise and showcase comedic timing lost between unfortunately placed vowels and consonants and what I can only describe as empathic woodenness. In a ghastly move, the film also commits the unforgivable sin of not letting the protagonist fully defeat the bad guy – Interceptor allows some random Russian interloper do that – and it kneecaps what might have been an otherwise commendable effort from all involved. Considering the weight of the misogyny subplot running underneath the primary plot, this is a near fatal turn.

Further mirroring Under Siege’s “good guy with skills” trope is the addition of Mayne Mehta’s deskjockey Corporal Rahul, a softly spoken and often cowardly secondary character who serves primarily as the foil for plot exposition to unwind and, eventually, his own tragically heroic character arc – he is to Pataky here was Erika Eleniak was in Under Siege. Nobly executing his disastrous role as primary antagonist, Home & Away “star” Luke Bracey is as generic a bad guy as I’ve ever seen, his handsome face and dull, near-comatose delivery failing to excite what becomes a predictably routine action lark. Australian acting royalty Colin Friels (Dark City) sullies his good name appearing in a few scenes as Pataky’s father, Zoe Carides (Black Balloon, Mystery Road) pops in as the US President, and Rhys Muldoon gets solid secondary billing for being almost unrecognisable as a short-lived military commander. Aaron Glenane, an actor also recently appearing on Home & Away, is excellent as the weaselly Beaver Baker, an accomplice of Kessel’s who betrays his country for a lazy couple million bucks.

Noted Aussie writer Matthew Reilly was given a budget of just $15m to make Interceptor – as far as debut films goes Interceptor is a laughable popcorn actioner with few redeeming features, but what makes it interesting is the script he wrote, and had re-written by Tomorrow When The War Began director Stuart Beattie. Sprinkled through Interceptor’s pungent action fragrances and formulaic tropes is a definite anti-American sentiment, kicking the military industrial complex fair in the ballsack by way of asking Luke Bracey to formulate cogent arguments as to why America should be wiped off the map with nukes. Sexism and misogyny, the unfairness of the US war machine, and the apparent ease with which a multitude of unseen Russian operatives can hijack and steal sixteen ICBM’s, forms the central tenet of Interceptor’s ripe subtext, and there’s a somewhat nihilistic undertow to Interceptor’s apocalyptic plot and character mechanics that sat very well indeed with me. At times the script is far too clever for the film’s own good – we just want a knockabout action thriller with guns and explosions, and in the absence of that can we please have some characters we enjoy watching… in the absence of even that, at least make some kind of comment on war, the price of freedom, and the absolute catastrophic result of lax US military security in protecting high value targets? Interceptor says yes, but let’s educate some people first. Interceptor isn’t all bad, though. I mean it is, but at its heart the film understands its limitations and just goes for broke, poleaxing Elsa Pataky’s homespun supermodel looks into a sweat-stained, wounded, gristle-chewing action heroine who whoops ass and satisfactorily delivers the coup de grace to various bad guys in the story. Interceptor is generic, formulaic to a fault (including Michael Lira’s oh-so Hans Zimmer-esque action score) and gifted with not-bad-but-not-great visual effects, but it does at least entertain in a diverting, mildly amusing cheese-fest way. I’ve seen worse, but I’ve arguably seen a lot, lot better.