Although 2018’s Venom came along and surprised me with just how much fun it was, sadly Andy Serkis’ sequel, Let There Be Carnage, is a stupid, obnoxiously loud and largely unfunny VFX film that’s light on heft, heavy on jokey dialogue, and exceptionally shallow on interest. This film feels more like how I expected the first film to be: stupid and dumb and completely without value, made by committee and languishing as one of the more dire exponents of the comic book movie subgenre. Although getting to watch Woody Harrelson hamm it up as the wild-eyed villain Cletus Kasady is always worth the price of admission, you get the sense that the film’s conspicuously brief running time and the incredibly fast pace at which the story unfolds is designed purely to prevent you from focusing on how daft, convoluted and stupid it all is. Let There Be Carnage is an abortion of a thing, an unfunny, flaccid, wasteful entry into Sony’s ever-widening Spider-Man Marvel-adjacent cinematic universe, a significant step down from the first film (which isn’t saying a lot considering how dumb the original was, in spite of my enjoyment) and feeling like it’s designed purely to wink-wink to the audience than to develop its own interesting take on the duality of Venom itself. 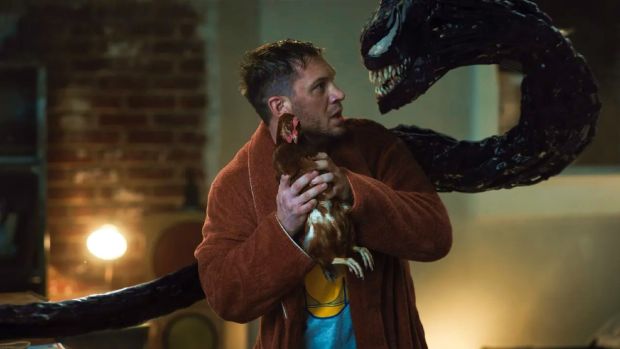 Reporter Eddie Brock (Tom Hardy) lives in his San Francisco apartment with his symbiote, Venom. Through Detective Patrick Mulligan (Stephen Graham), Brock is requested by death-row serial killer Cletus Kasady (Woody Harrelson) in order to determine where a lot of bodies are located. After inadvertently allowing Kasady to bite his hand, Brock is shocked to learn that part of the Venom symbiote now resides within the psychotic mass killer, who hopes to escape his own execution and rescue the love of his life, the imprisoned Frances Barrison (Naomie Harris), aka Shriek, from her incarceration at a nearby facility. Using the power of the symbiote, known as Carnage, Kasady causes a trail of destruction through the city, leaving Brock, Venom, and Brock’s one-time girlfriend Anne (Michelle Williams) and her new fiancée Dan (Reid Scott) to assist him in trying to save the city. 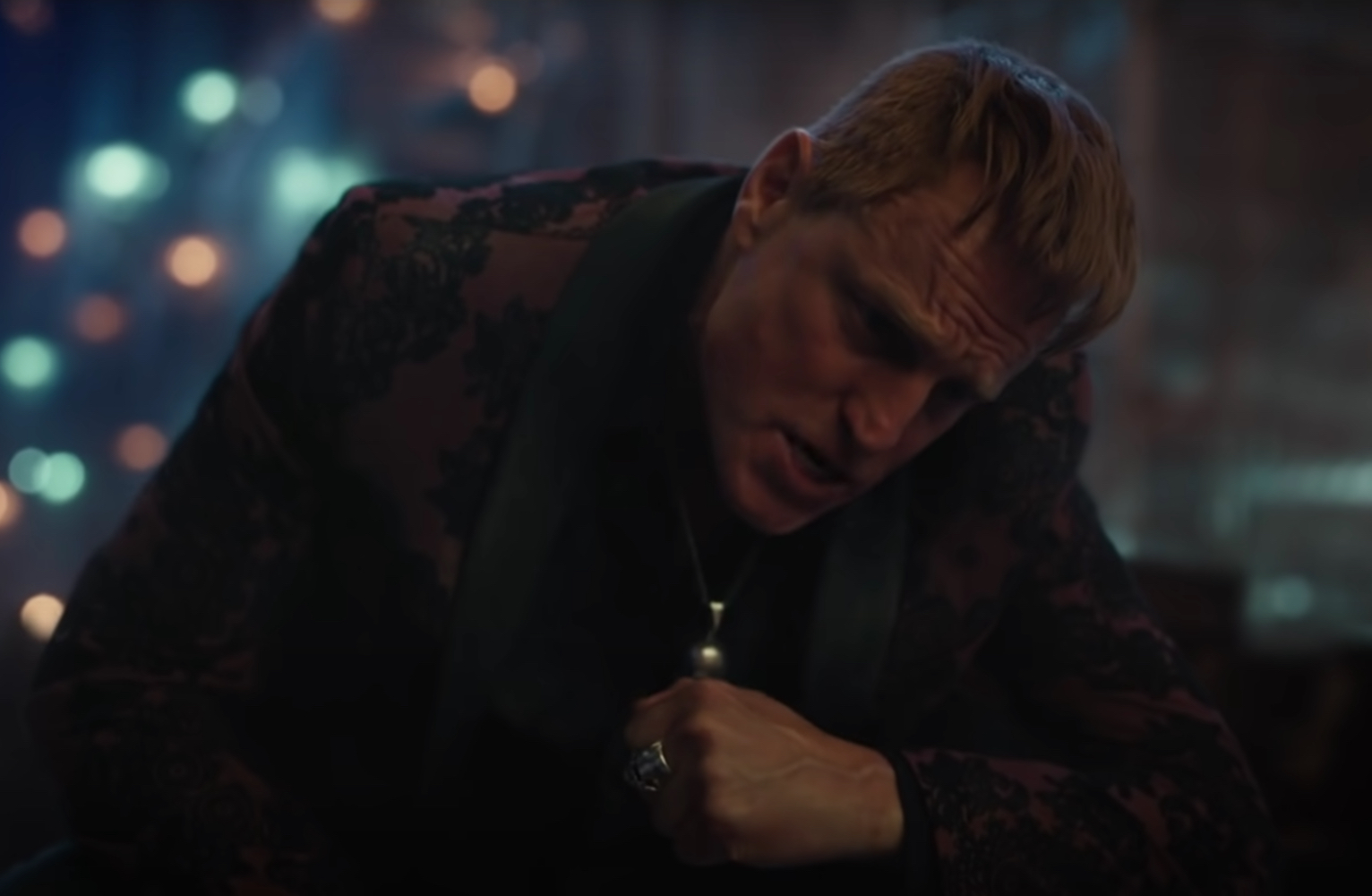 One of the things audiences crave from any modern blockbuster is an adherence to a film’s own set of rules. A film can be as silly as it wants and get away with it if it doesn’t take audiences for fools, and maintains a shred of believability within the structure of the film’s established parameters. Even nonsense films like this have to have a kind of realism within it to make it all make sense, otherwise extravaganzas like Let There Be Carnage end up being entirely sound and fury but signifying nothing. Sadly, Let There Be Carnage is ruinous to all with its obnoxious storytelling, refusal to develop characters, preposterous visual effects, and arrogance in expecting the audience to just lap this slop up like its a masterpiece. 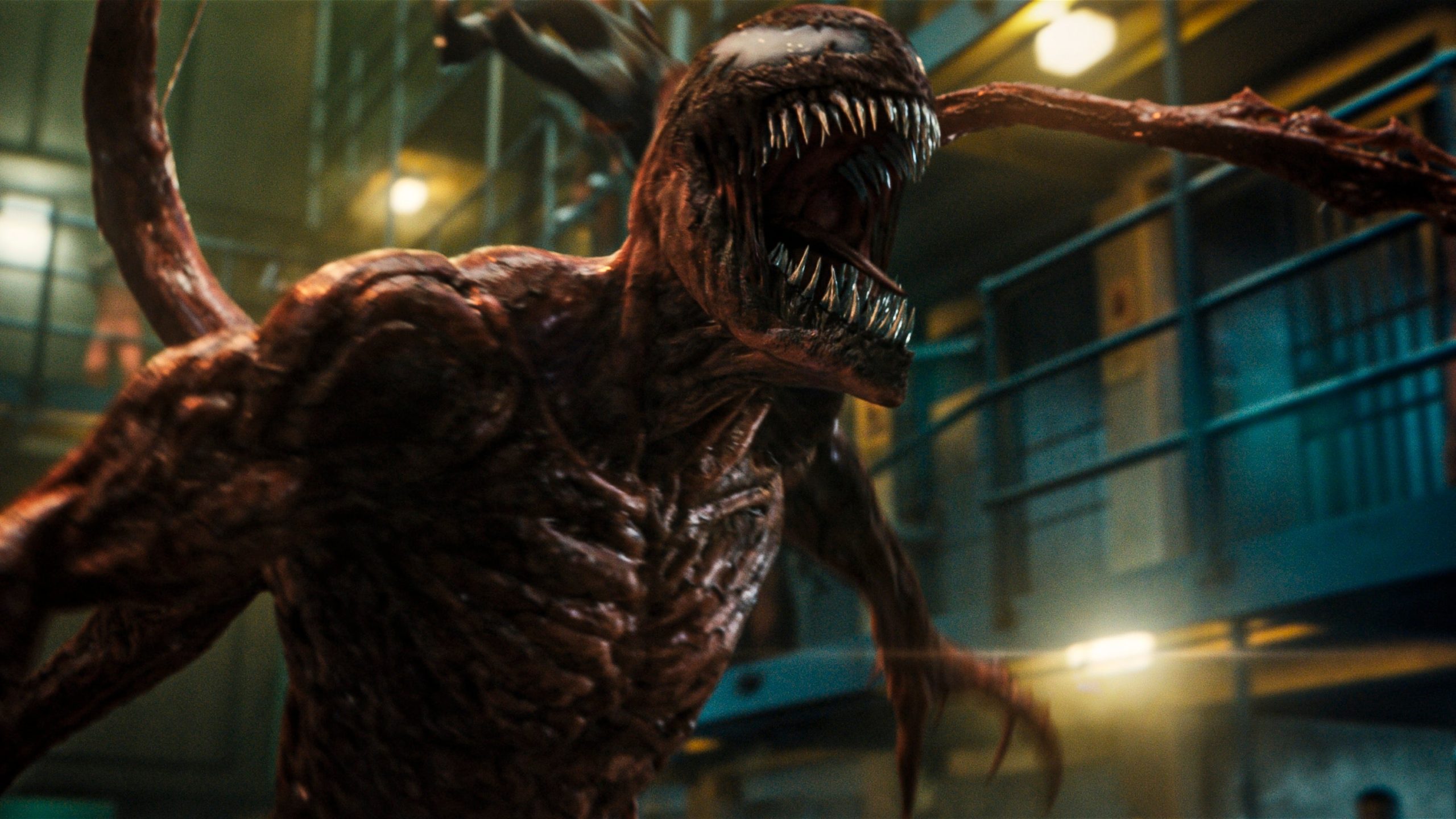 Written by Kelly Marcel, Let There Be Carnage tries to keep a foot in two distinct subgenre camps: one one hand, the film is a bonkers, balls-to-the-wall VFX extravaganza, and plays like pages torn directly from the comic books on which both Venom and Carnage appear. On the other hand, it desperately wants to be a lot more serious than it is, offering plenty of unfulfilling hints, subplots, and sidebar throwaway ideas before deciding to do exactly nothing with them. Marcel’s screenplay appears to have been the victim of some edit room and boardroom tinkering, because I can’t honestly believe a major studio would have gone to greenlight with the film that appears on the screen translated directly off the page. Nothing about the film makes much sense, a cavalcade of newfangled characters thrown into the pit of Venom’s orbit and expected to somehow make themselves accessible to the audience – I should probably add that Venom comic readers will likely have more fun than average audiences, because I suspect a lot of what transpires here is heavy in comic-book riff – with none of the actors involved able to generate an ounce of empathy, sympathy or coherent logic behind the thought processes of the story. I might be wrong, but Let There be Carnage feels an awful lot like “film by mandate”, to wit: a studio committee decided they had to make a sequel, and figured a low spend on scripting and middling spend on VFX should be good enough. 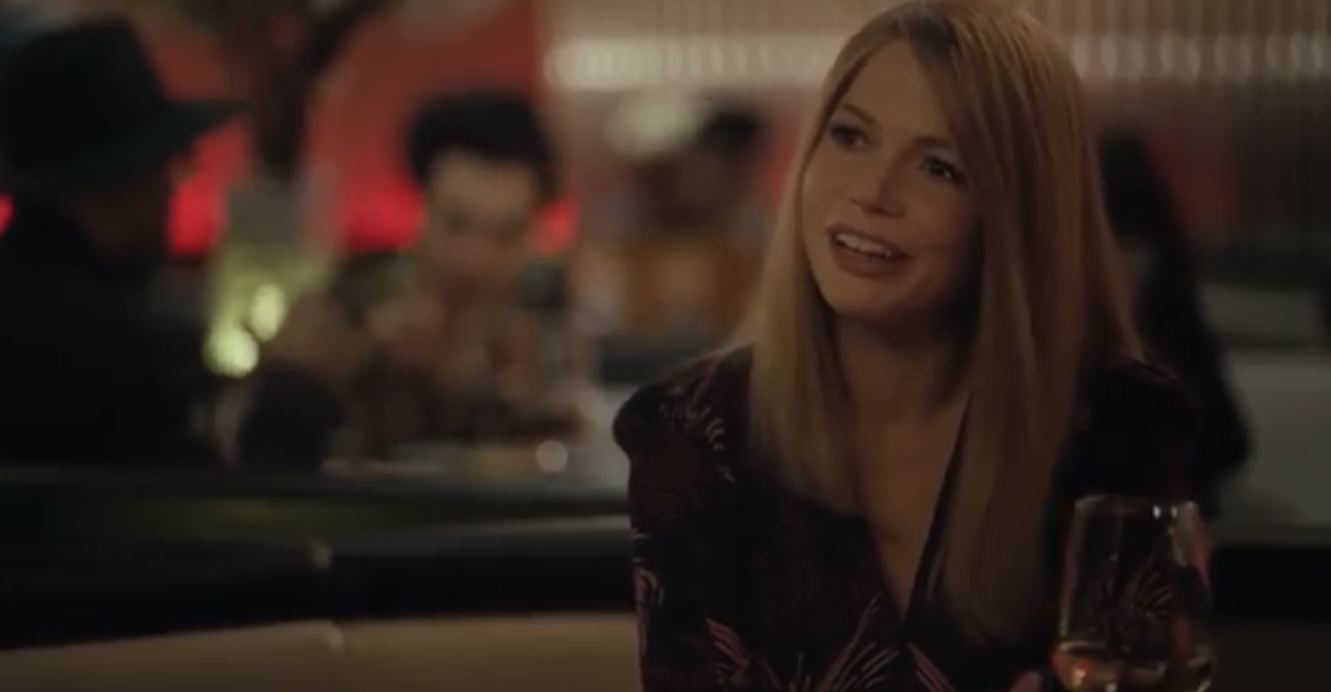 From its painful dialogue and character development, to the inane “comedy” of Venom’s verbal sparring with Eddie Brock, to the nonsensical final act set inside some kind of cathedral (honestly, people who watched Paris’ Notre Dame burn down should look away, lest they be triggered), Let There Be Carnage offers not an iota of intelligent thought to its proceedings whatsoever. Tom Hardy looks utterly lost here, although he once more proves he’s solidly invested in the character of Eddie Brock and wants to make him work, despite not being given the latitude to do so. Michelle Williams and Reid Scott’s character feel like afterthoughts to the story, added on at the last minute because a contract got signed somewhere, and neither of these nominally excellent actors have a single defining moment in the movie other than to ballast out the combative Venom/Carnage brawling, which is really all you’re here for. Woody Harrelson appears to be having a blast as Cletus, screeching and hollering with a Deep South drawl that switches his lunacy for idiocy and back again with such schizophrenic madness it’s maddening. Naomie Harris… why was she even in this movie? God only knows, because it sure as hell wasn’t for anything the audience could invest in. 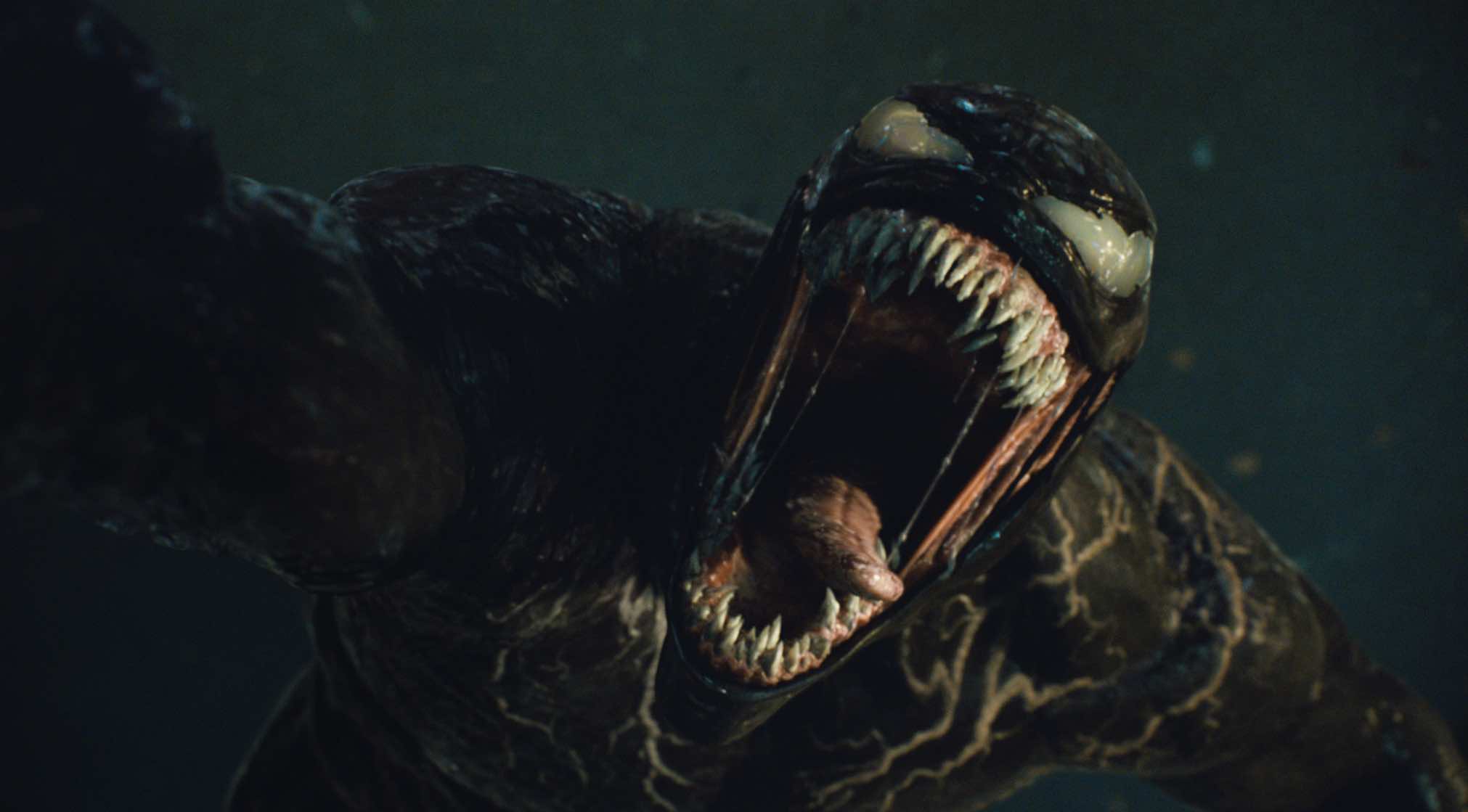 Andy Serkis, better known for his work as Gollum in Peter Jackson’s Lord Of The Rings films, steps up to the camera as director, but not even his prestigious film-school history at the hands of a true master have granted him the ability to turn this slobberknocker pixel-fest into anything resembling an entertaining film. Sporadic moments of zesty comedic humour aside, the film’s action feels cut-and-paste, formulaic and often slow-motion predictable, and the visual effects of both Venom and Carnage, two completely digital creations, hover between terrible and pretty decent, and the narrative tonal shifts between comic-booky pulp and modern-thriller chills are jarring indeed. Serkis tries to elicit guffaws and tension within any given scene, but the film’s pace refuses to allow any specific style to proliferate, rendering the film neutered by default. It’s hard to generate thrills when the dialogue is so naff, the editing so discombobulatingly propulsive, and the characters so awkwardly written. Let There Be Carnage moves like a meteoric bullet train of a movie all about the whizz-bang and less about the intelligence of the viewer, capitalising on the names and associative nostalgia for both Venom and Carnage without doing any work to either further their on-screen development, or bring their tete-a-tete into any meaningful place emotionally. At the end of the day, they’re two CG characters smashing rendering time at each other for the sake of nothing. Venom: Let There Be Carnage is a miasma of editing, shoddy writing, dreadful characters and nonsensical studio-led mandates to link it all up to the successful Spider-Man franchise. It’s a film lacking any kind of soul or spirit, an empty shell of a thing similar in effect to the execrable Jonah Hex or unwatchable Spawn. While I had no expectations going into the original Venom it surprised me with how intriguing the premise of dual identity could be. What I got from Let There Be Carnage, however, was the Ghost Rider: Spirit of Vengeance of Venom movies. It’s awful, unwatchable shite.