For at least a decade or more, Kevin Costner was the definitive Hollywood darling. From late 80’s success in Bull Durham and Field of Dreams, to dominating the entire 1990’s with critical and commercial success like Dances With Wolves, JFK, Robin Hood: Prince Of Thieves, The Bodyguard, Thirteen Days and 3000 Miles To Graceland, as well as monumental box-office bombs such as Waterworld (which has since become a cult classic) and The Postman, the latter an ill-conceived and executed production based on David Brin’s book of the same name, Costner staked his claim as one of the preeminent stars of the period. Having never seen The Postman until now, I was keen to find out if the initial critical lambasting the film received was warranted or misplaced; famously, the film snagged a win in every category it was nominated for at that year’s Razzie Awards, including Worst Picture and Worst Director, so I didn’t have high hopes. 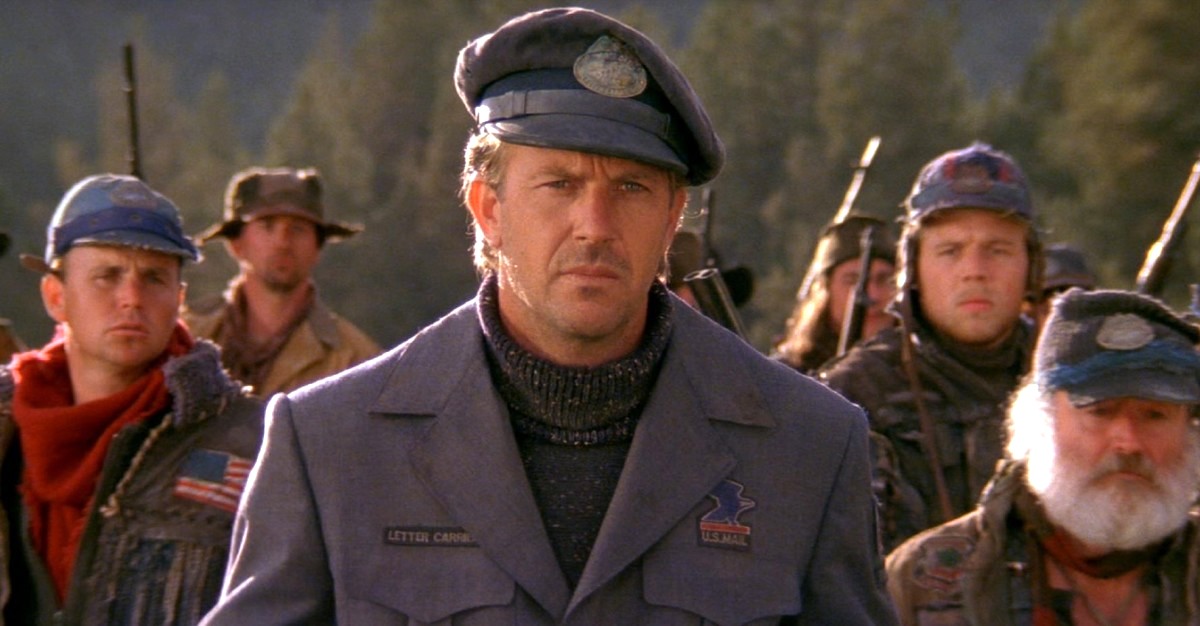 Those hopes for a film of at least some kind of entertaining quality were soon dashed, however, once The Postman started. It becomes immediately apparent that Costner, despite his Oscar-winning talent behind the camera, has delivered an absolute turkey with this film; he not only directs but also stars as the title character, a misfortune the film has to suffer through as the indignity of the man’s ego forces cringeworthy moment after cringeworthy moment upon a rapidly unwilling audience. That it’s based of a published work of fiction gives me pause too, despite the sizeable  rift between the quality of a book and its subsequent film adaptation throughout Hollywood’s proud history, in that for a film clocking in at nearly three solid hours, there’s almost no discernible interest in what’s happening on the screen at all. 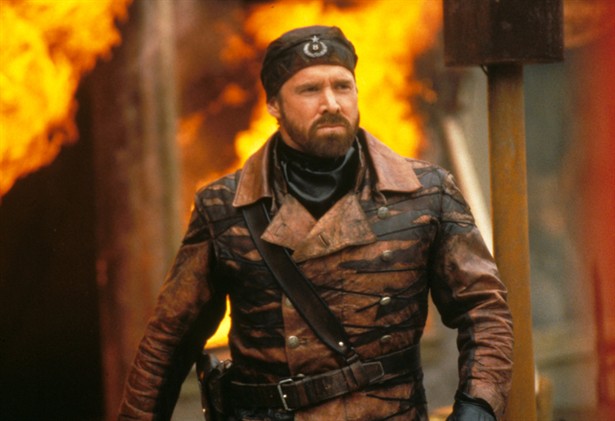 The Postman’s premise is (even back in 1997) hardly fresh; set in a post-apocalyptic America which has seen the breakdown of civilisation relatively recently, a marauding gang of antisocial zealots, led by Will Patton’s (Armageddon) General Bethlehem, savage the land and terrorise the local establishments dotted throughout what remains of the country. Creeping into this is an unnamed anti-hero, Costner, who escapes slavery at the hands of Bethlehem and becomes a focal point for rebellion by villagers and townsfolk when he dons the garb of, and pretends to be, a postman, delivering mail between settlements and raising the ire of a narcissistic and power-hungry General. At one town, the Postman meets a woman, Abby (Olivia Williams – The Ghost Writer) who requests he impregnate her as her husband cannot, while another inhabitant, Ford Lincoln Mercury (Larenz Tate – Dead Presidents, Ray) aspires to the heroism of the postal service himself. As time wears on, with Bethlehem in pursuit, the Postman doggedly travels from town to town stirring up resentment against the oppressors, until full-scale conflict is inevitable. 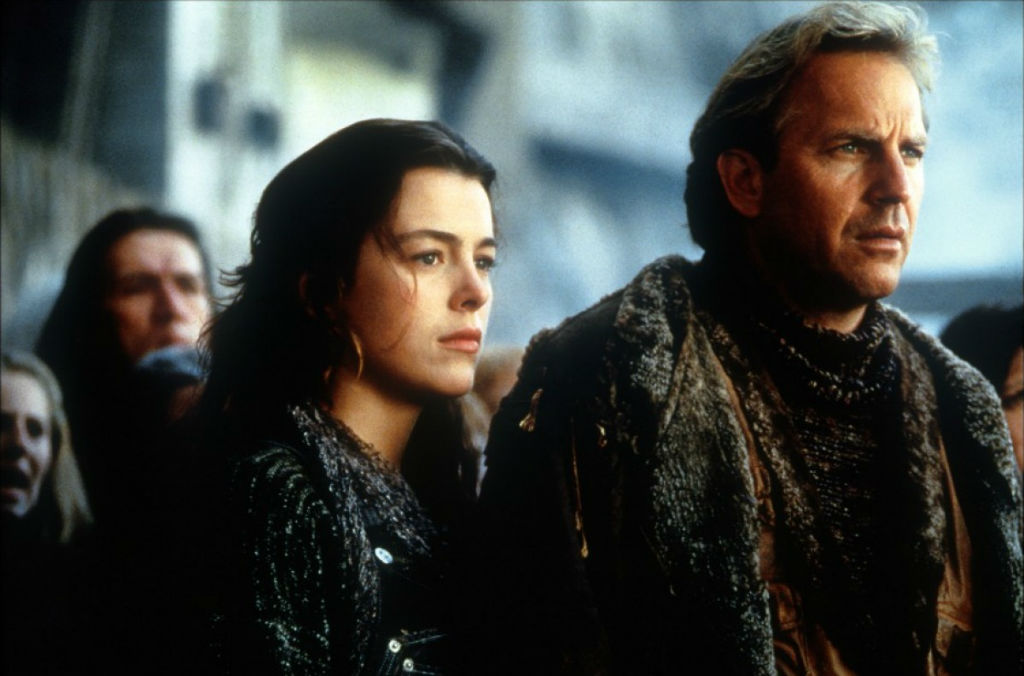 There are several films to which The Postman owes a significant debt. First, this is absolutely a land-based redo of Costner’s own Waterworld (directed by Kevin Reynolds, whose stylish 90’s flair is absent here), with the Postman character an almost scene-for-scene reworking of the Mariner, while Patton’s General Bethlehem is a far more scrupulous (and decidedly less fun) take on Dennis Hopper’s eye-patch festooned Deacon. Olivia Williams is easily a better actor than Jeanette Tripplehorn, as the unfortunate woman who crosses paths and butts heads with the hero, and Larenz Tate’s enthusiastic Ford might very well be a distant cousin to Tina Majorino’s insouciant Enola. The Postman also steals outright from Costner’s previous film, Dances With Wolves, in one of the more eye-rolling moments of the story having Costner’s idealised character barnstorm in front of a rag-tag army across a battlefield shouldering an enormous American flag, a carbon-copy of a early scene from his Oscar-winning debut that feels far less patriotic for its faux Civil War motifs. 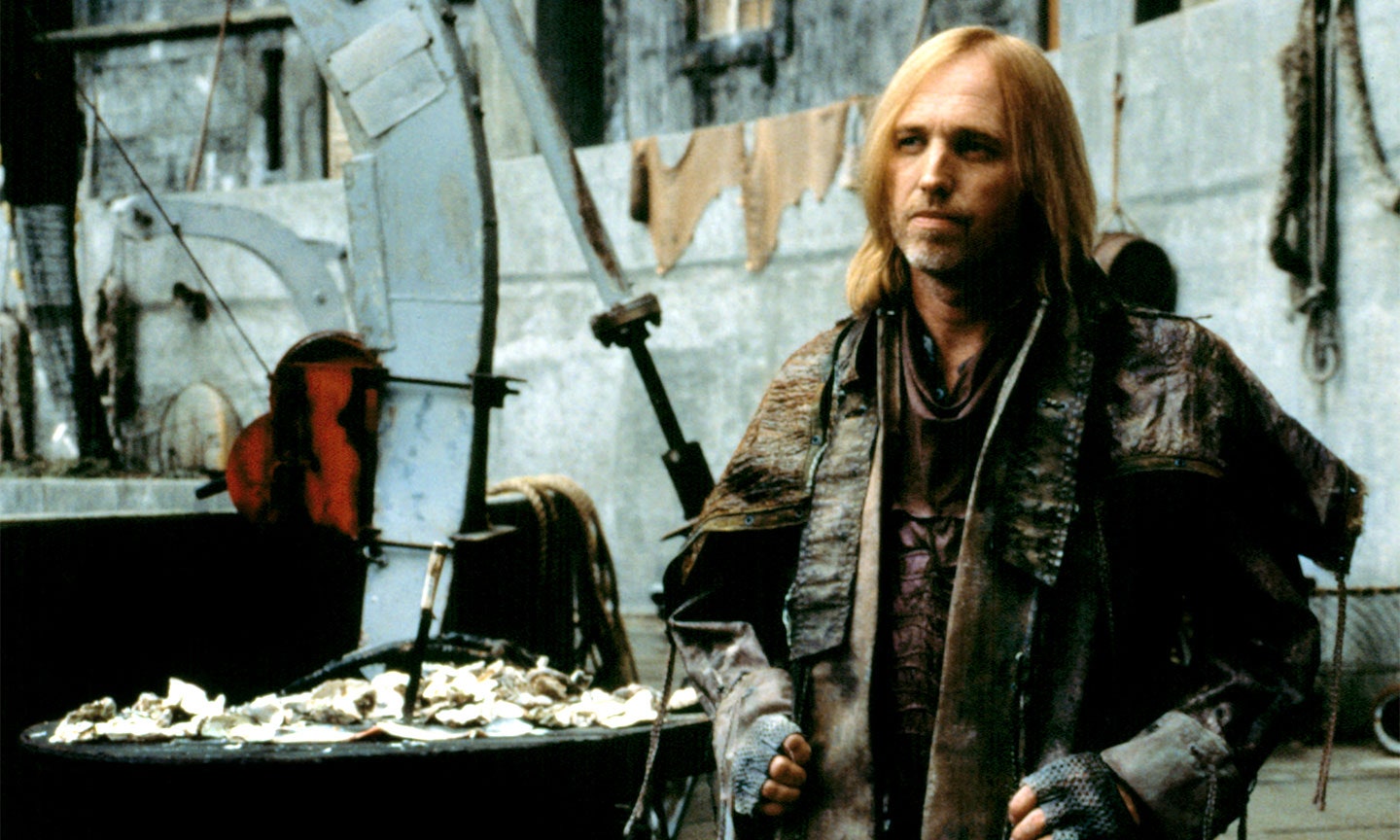 Oh, the Civil War imagery in The Postman is enough to make you groan painfully with the tepid, po-faced sincerity Costner tries to exact from every unsubtle scene and wretched line of dialogue. I get that the rapidly growing nascent postal service of the film is redolent of the Unionist Army of America’s torpid history, and that Bethlehem’s weaponised legion is indicative of the Confederates, but Costner can’t even be bothered to hide the fact. Subtle, The Postman is not. One of the film’s key trailer-worthy moments involves a young lad (played by the director’s own son, Joe) standing at the front gate of his mother’s homestead, holding aloft a letter he wishes delivered, when Costner’s mailman whistles by on a horse, unseeing. The Postman turns, sees the urchin forlorn, and then charges back as if in a joust to snatch the outstretched letter and become the hero of the reborn infant nation. A final sequence in which this scene is replicated by a six foot statue, a la a shitty Statue of Liberty accompanying Mary Stuart Masterson’s last-scene catharsis, is truly ghastly in its pomposity and self-centeredness. It’s all captured against James Newton Howard’s soporific score – the composer, incidentally, had worked on Costner projects prior to this, having scored both Wyatt Earp and Waterworld in the years previous – and lensed by Aussie cinematographer Stephen Windon, now better known as Fast & Furious franchise regular DP since Tokyo Drift (excluding the fourth instalment). 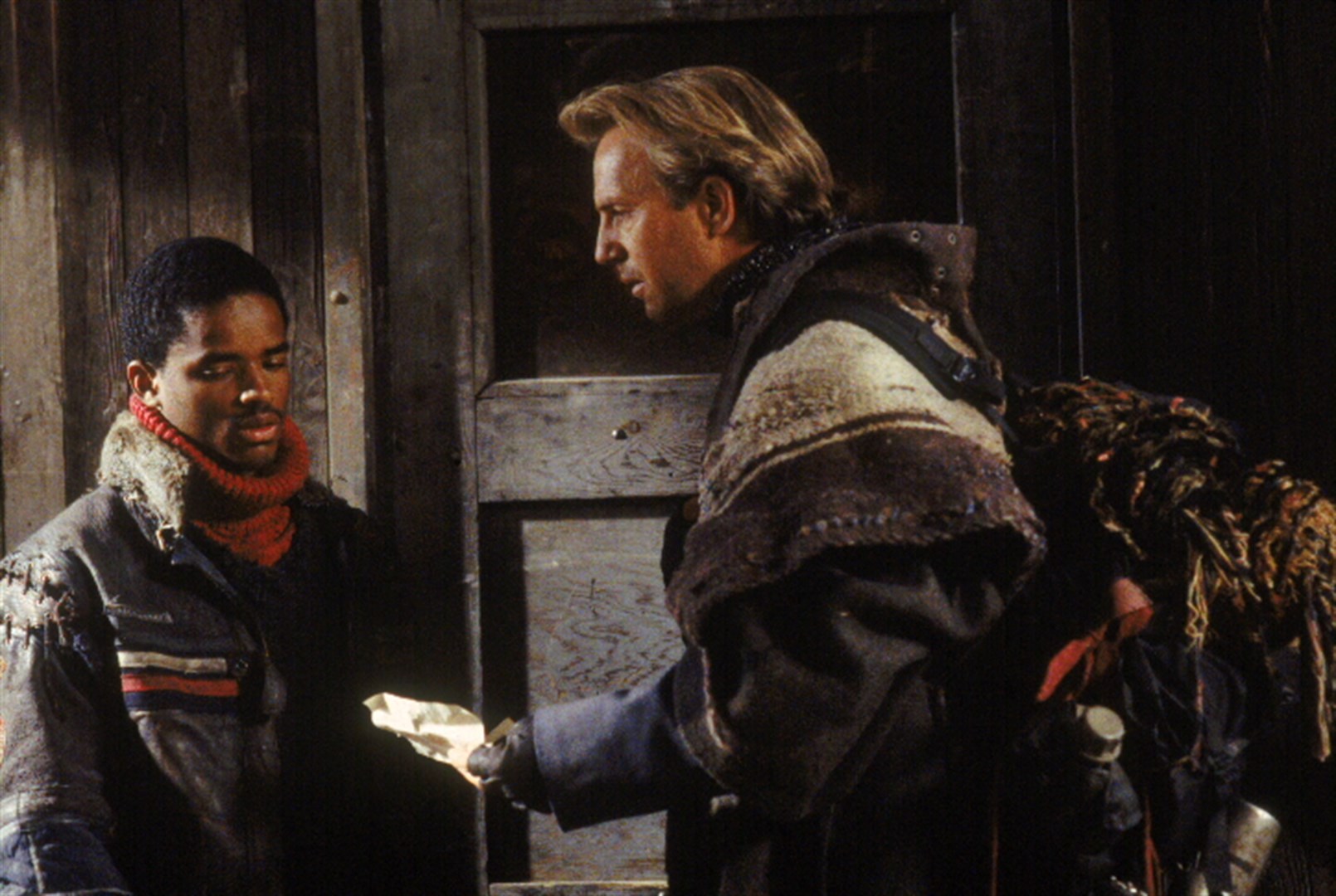 In terms of cast there’s little doubt Costner couldn’t have assembled one finer, but it’s the choices he makes with them that rankles the viewer. There’s a lot of well cast waste here, with the film requiring little from the likes of Giovanni Ribisi, Scott Bairstow, Peggy Lipton and Daniel von Bargen other than to turn up and say their lines without chuckling at the inanity of it all. And the writing on The Postman is terrible; screenwriters Eric Roth and Brian Helgeland, both legends of the industry and titans of their craft, deliver astoundingly dire dialogue for these poor actors, from the stilted inclusion of Shakespeare to the random rabid exhortations of General Bethlehem, to idealised patriotism and heroism from both Costner and his mailbearing cohorts. That Olivia Coleman’s performance stands out as both the best and the most effective among this miasma of terrible bespoke pontifications isn’t saying a lot because not even she can raise a pulse within The Postman’s fumbling ineptitude. Her sex scene with Costner, at a delicate point in the film’s sense of self, is awkward and embarrassing for all, most tellingly the audience giggling through it. And the less said about the film’s preposterous ending the better: that the film’s climax is simply two middle-aged men wriggling in the mud for the fate of a nation like two shitty kids in a shit-strewn sandpit is laughable, and not in a good way. Both the cast and the audience deserved better. 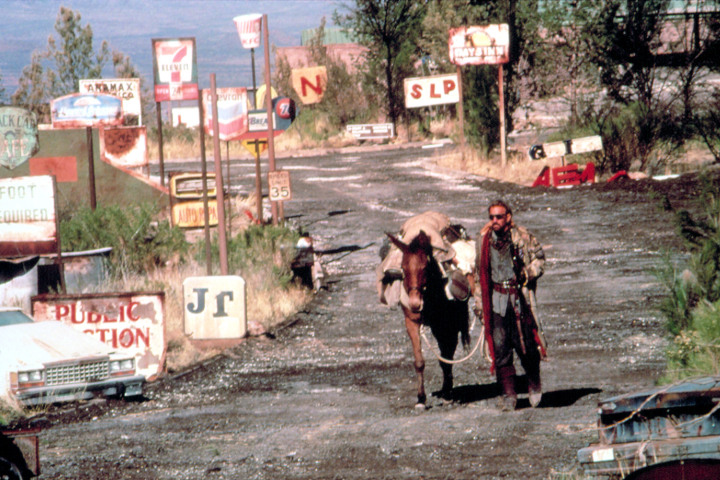 Another element of The Postman that doesn’t work is Costner himself in the title role. It’s a real industry ego-trip to cast yourself in the lead of an epic, big-budget production like this while also directing, and sadly Costner has actually gone and miscast himself as the Postman. He’s awful in the role, a role demanding a modicum of emotional gravitas and weight, with the actor unable to provide either in what turns into a laugh-fest at his expense. Dull delivery, boring performance and a near-continual belief that the Postman is actually a complete asshole, this accidental hero isn’t a whiff of the quality of that afforded to the actor’s most lauded role of John Dunbar, and within about ten minutes you realise this. Which is about the same time you realise there’s still three hours of this shit to go. Will Patton works hard to deliver a suitably douchey turn as Bethlehem, although the role lacks motivation or backstory, rendering the character as laughably pretentious and hostile to the viewing audience as the unfortunate townsfolk he encounters to forcibly solicit them into his militia. Larenz Tate makes a good fist of bringing Ford Mercury to life, as Robin to the Postman’s Batman, dreaming of an America reformed to its past glory. A few minor roles to Rex Linn, James Russo and a blink-and-miss-him Tom Petty (as a rapscallion town mayor during the film’s final act) flesh out a roster of “hey, it’s that guy” moments but otherwise… The Postman is three hours of wasted casting on such middling drivel. 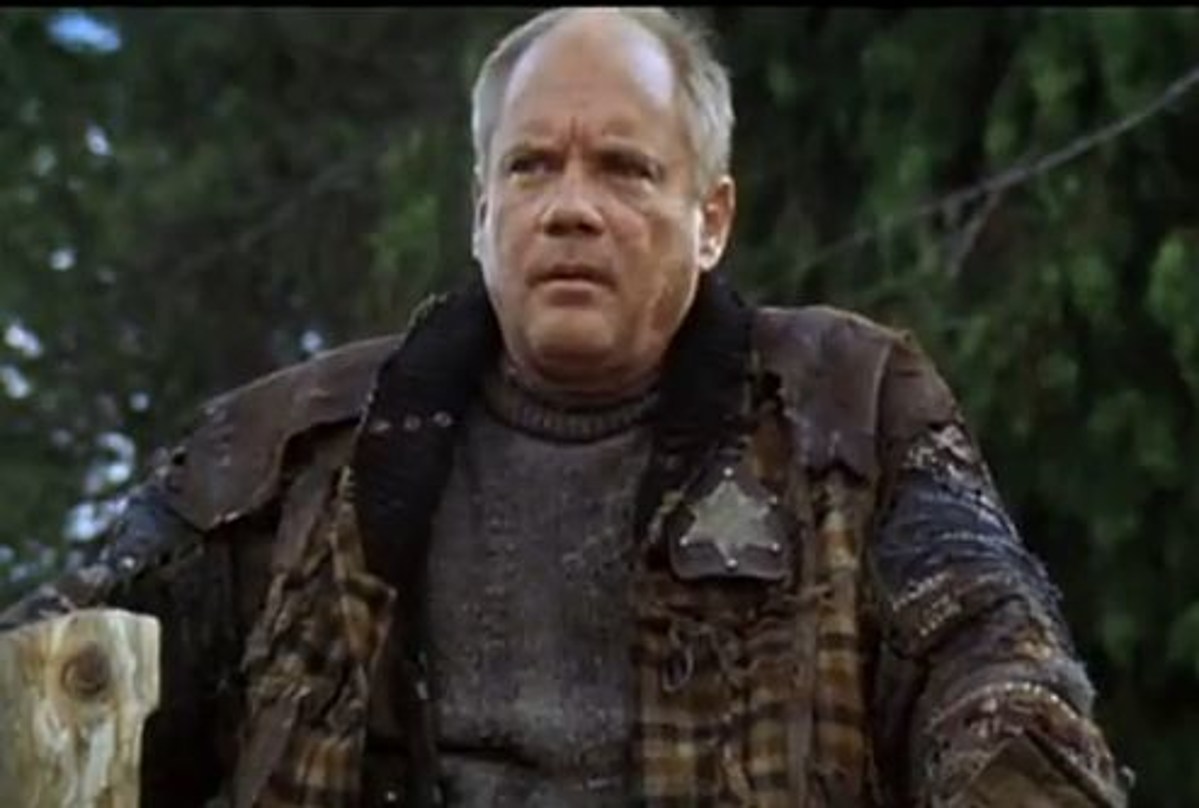 One thing I also felt worked against the film was an absolute uncertainty of purpose. Not only could you remove the first forty minutes of the film entirely without changing the result, but creative choices and themes appearing in the opening act never make it past half way – typically a film will offer an ideal, or a motif, or some kind of throughline in the narrative subtext, and carry that to resolution by the time we get to the rousing climax. The subtext Costner utilises early in The Postman – specifically that of a lion, which prowls through the Postman’s imagination before springing to life in a surprisingly effective action sequence later on – is absent by the time the title character faces down Bethlehem on the battlefield in the end. The film opens up suggesting that the Postman has some kind of supernatural vision, a kind of sense memory if you will, before promptly dropping this idea the moment Costner spies Bethlehem coming over a nearby escarpment. A chunk of the opening act sees Costner imprisoned by Bethlehem in a weird quarry-slash-barracks-slash-torture farm, in order to be indoctrinated, and upon his escape the Postman never thinks about, or references it, again. Why, then, is it in the film? Reportedly Warner Bros demanded Costner (who had final cut approval by this stage of his career) slice the film’s running time down considerably: hindsight being what it is, there’s little doubt at least half this film could have been removed to not only keep the pacing up but the problems at bay. So many good ideas (stolen from other films or not) are just discarded a whim, introduced before being dumped or cut short for whatever reason Costner felt would serve the film artistically. Sadly, we’ll never know what The Postman could have been in the hands of an editor confident enough to actually remove some of the footage. 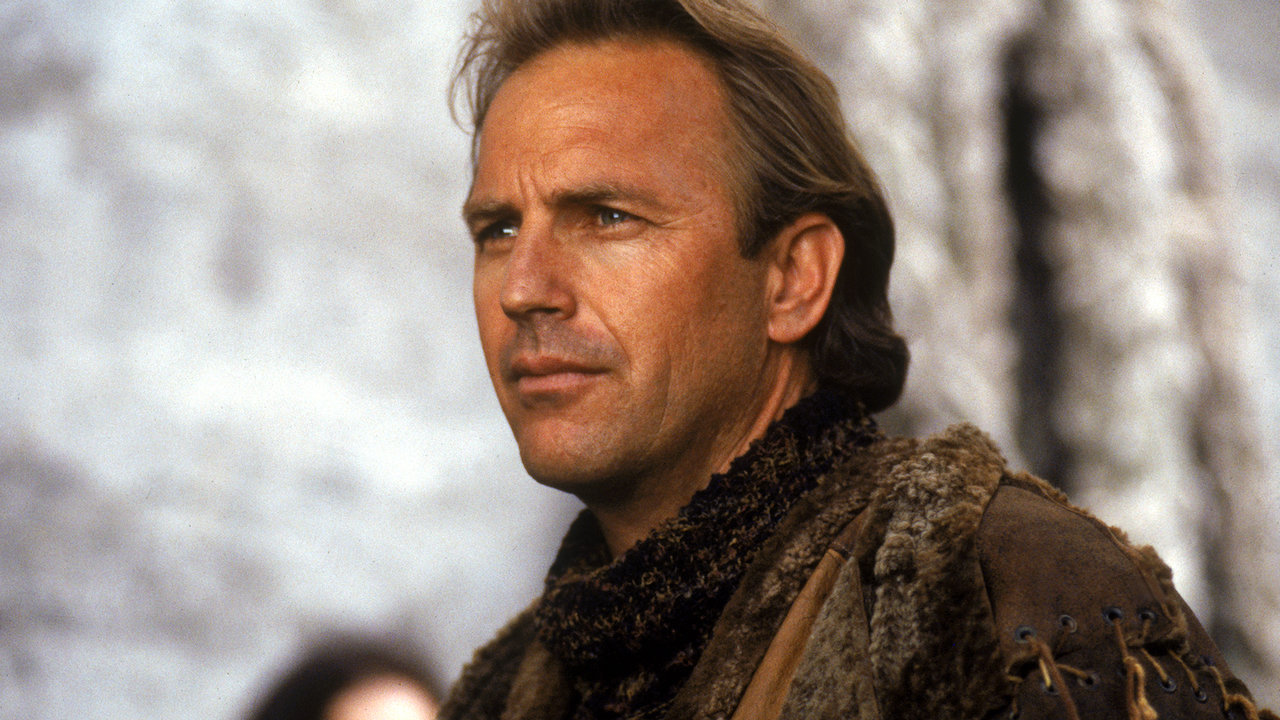 That The Postman wasn’t a career-killer is something of a marvel. Perhaps it’s the typical “failing upwards” effect most Hollywood men tend to gravitate towards, but this film would have spelled doom for any director working today. I guess when you have an Oscar sitting on your shelf you can pretty much do anything and still keep keeping on, but The Postman is so turgid, so full of itself, so tonally jarring and formulaic, you have to boggle at how anyone escaped the whirlpool of this debacle with a career intact. If it had a few decent laughs I’d have recommended the film as an underground minor classic but with such taciturn intonations and inescapably deadpan action – Costner lacks the skillset to really bring the film’s action sequences to life with any fluidity or excitement – there’s absolutely no reason not to just warn you off this trash as a forgettable sci-fi disaster. Return to sender, this one’s an unmitigated disaster.