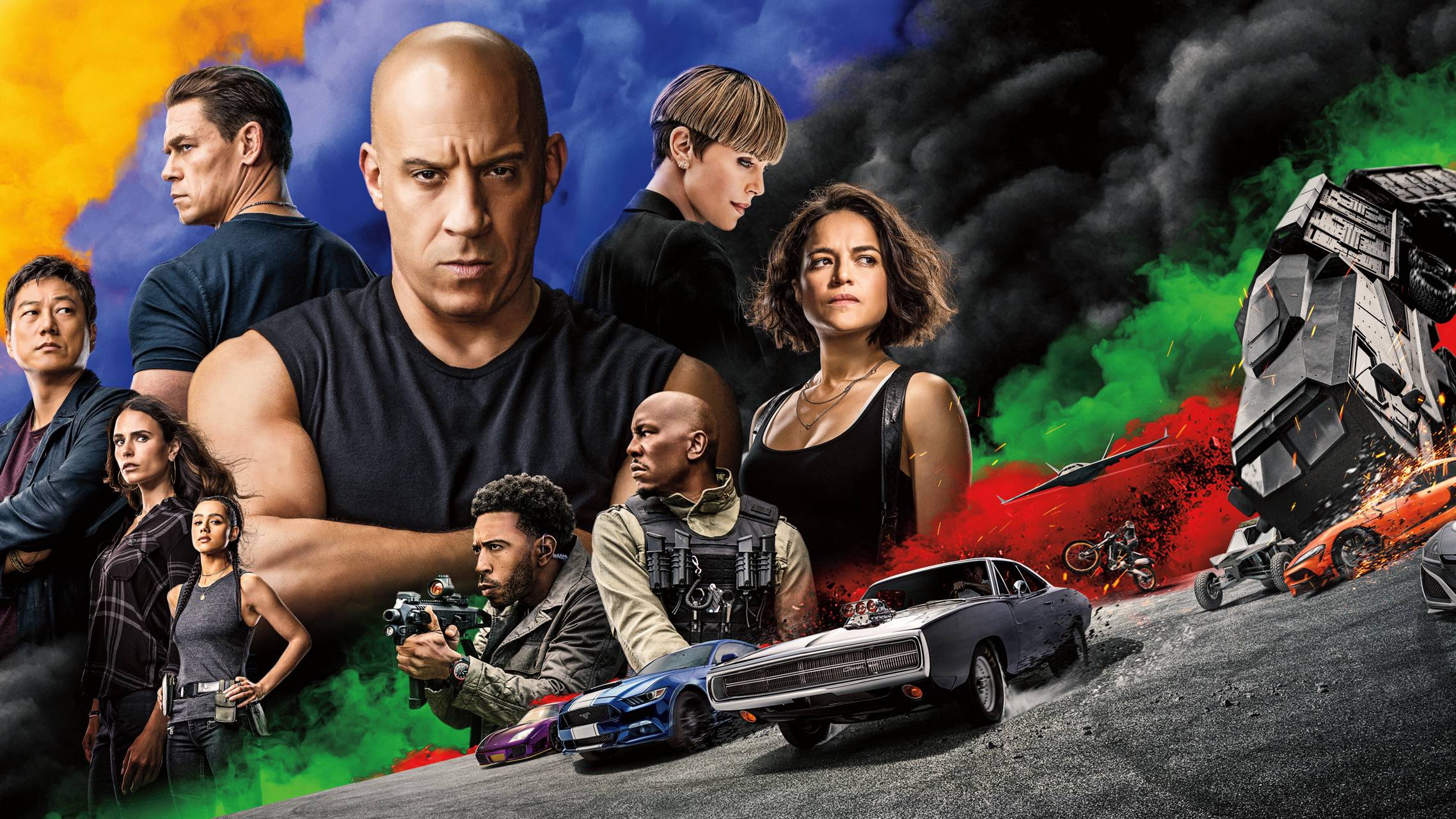 After becoming increasingly preposterous over the last several instalments, returning director Justin Lin takes a once-venerable action franchise and turns it into a parody of itself. Led from the back foot by Vin Diesel, who glare-acts his way through nonsensical dialogue and truly ghastly plotting, the tenth overall instalment of this car-racing franchise is heavy on action and supremely light on intellect, to its detriment. After the physics-defying antics of The Fate of The Furious, good-natured critics and fans joked that the series had got to the point of upping the ante so much the only place left for these characters to go is into space; as I said, we joked about it, but Lin and Diesel and franchise producer Neal H Mortiz obviously took us seriously, because… well, F9’s most stupefyingly terrible sequence sees a pair of the Fast crew thrown into orbit. Boasting a cavalcade of returning franchise players – with the notable exception of Dwayne Johnston following an off-screen squabble with Diesel – F9 jettisons even the tiniest shred of believability and turns a once improbable franchise in which former DVD thieves become international operatives into a mindless, laugh-free, takes-itself-way-too-seriously action slobberknocker that delivers concussive blasts of obnoxious cinematic cheese amid scenes of poor Vin Diesel trying to turn himself into a Proper Actor. 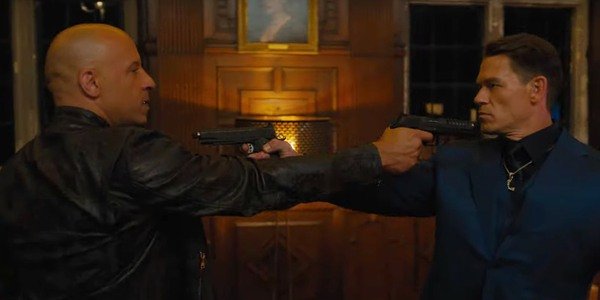 Years after the events of the previous film, Dom Toretto (Diesel) lives an isolated life on a farm with wife Letty (Michelle Rodriguez) and their young son Brian. Former associates Roman Pearce (Tyrese Gibson), Tej Parker (Chris Bridges) and Ramsey (Nathalie Emmanuel) arrive to inform them that their one-time handler, Mr Nobody (Kurt Russell) has been seemingly killed trying to obtain information about a mysterious superweapon, and the gang all saddle up to follow the trail. As they locate the wreckage of Mr Nobody’s crashed plane, the team encounter Jakob (John Cena), Dom’s never-before-mentioned brother, who seeks the location of the weapon for the advancement of Otto (Thue Ersted Rasmussen), a Eurotrash wannabe terrorist. As Dom reminisces over his family history, in which the Dom’s father Jack (JD Pardo) is killed in a racing accident decades prior, he is shocked to learn that former team member Han (Sung Kang) isn’t dead (as depicted in the closing credits of Tokyo Drift and reprised in a number of sequels) but has been alive all this time, training a young orphan girl (Anna Sawai) in the ways of a deadly assassin. After tracking down Jakob and his gang to Edinburgh, Scotland, Dom and the team, together with Dom’s sister Mia (Jordana Brewster), battle for control of the secret weapon using super-magnets and the bizarre sight of sending a car into space to knock out a satellite.

Before I start – I mean really start – I’d like to reiterate that I have always been a fan of the Fast Saga (as it’s now known collectively), and I even admit to enjoying the worst regarded film in the series in Tokyo Drift quite a lot. So take that admission of fandom with you as I state right from the outset that F9, directed by franchise stalwart Justin Lin, is absolutely the worst film of 2021, and by a wide margin the worst film in the franchise. It’s less a film than it is a series of unfortunate events, strung together with troublesome pacing over an egregiously long running time, some of the saga’s most awful dialogue, terrible acting and often risible visual effects, a vacuum of interest and intellect despondently trying to wring the most implausible plot devices and meta-references (Gibson’s patter for the whole film is about how indestructible everyone is…. I mean, yes, that’s the joke but exactly why you’d make a point of making it a point baffles me) for the sake of quickfire action. 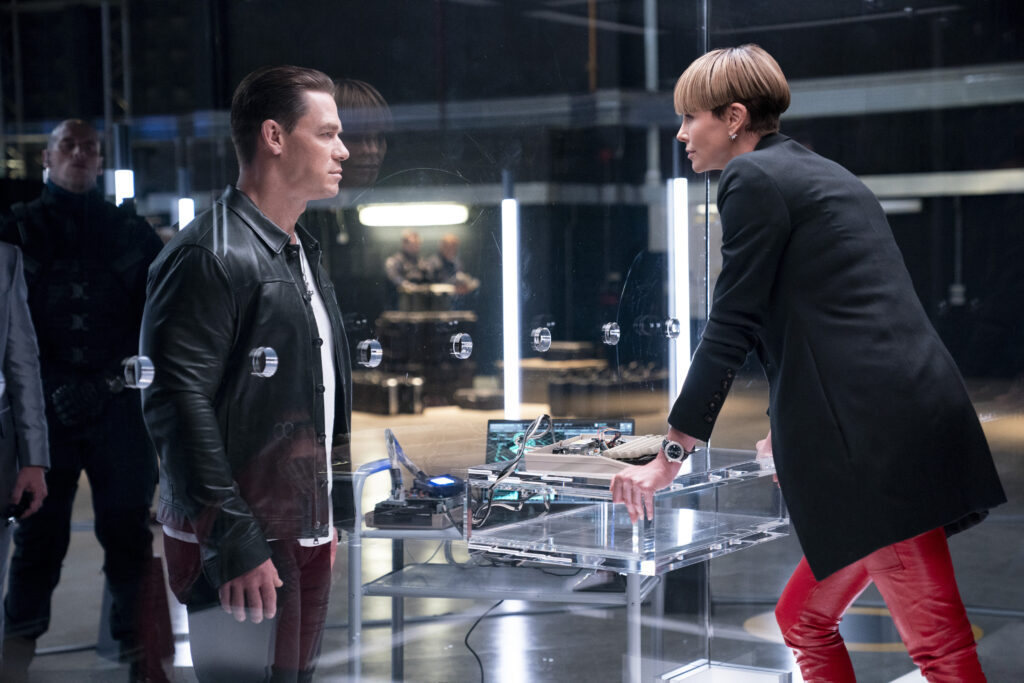 Writing on F9 is credited to Lin (who should know better) and co-scribe Daniel Casey, and whereas previous entries into this insane franchise have traded heavily on Dom’s “we’re all family” enunciation with an element of love and heart, in this film it’s become a joke. Dom suddenly has a long-lost brother we’ve never even heard mentioned (even in passing) before? And he’s also a globetrotting super-agent able to catch flying cars with his bare hands and punch through concrete walls? Sure, I’d buy that if it wasn’t presented to off-handedly. A lengthy flashback series of vignettes showcasing Jakob and Dom’s history over their father’s death is intended to develop this relationship but it comes off with the wrong tone, with “young Dom” and “young Jakob” actors Vinnie Bennett and Finn Cole saddled with skin-crawlingly trite dialogue. The sequences feel like shitty deleted scenes from Days Of Thunder, and that’s not the angle the Fast Saga has ever aimed for. The balance between the warm-hearted family vibe the Fast Saga has previously deployed and this frustrating desire to have the plot move as fast as the cars do leans to heavily into style over substance – something I’d never thought I’d say about this series of films – and the fact that it has to reference the memes and jokes we all make about the franchise to talk the viewers off the ledge isn’t clever, it’s just sad. Acknowledging the stupidity of its own disbelief is F9’s moment of jumping the shark. 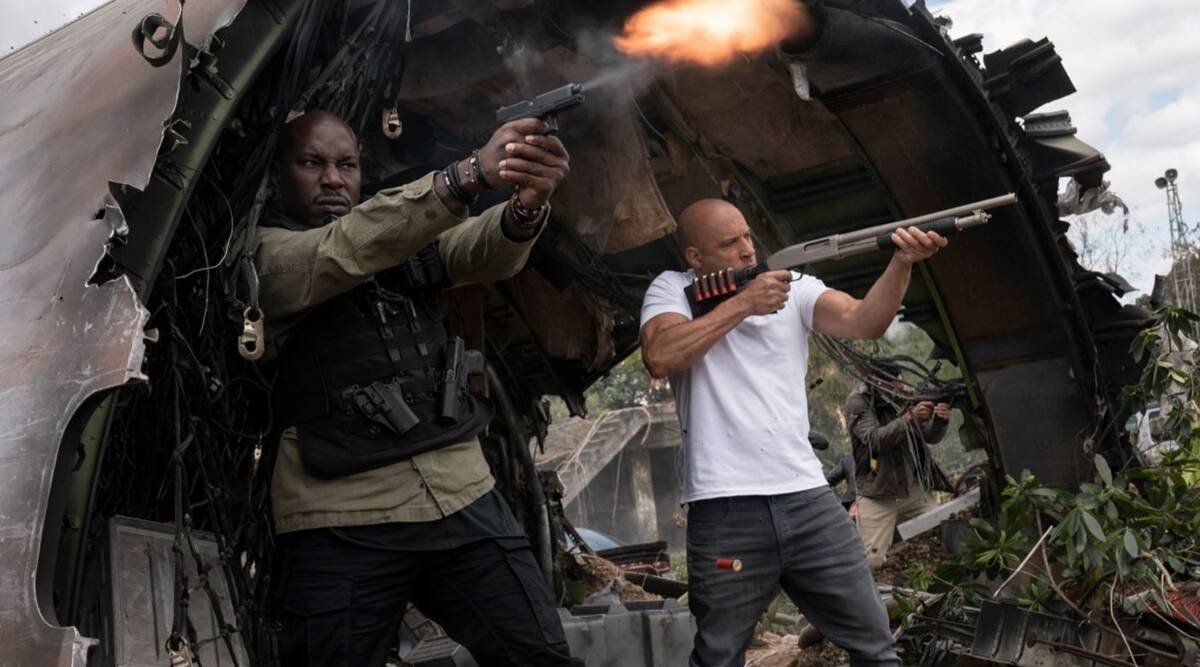 As with all the Fast films, F9 is technically well produced and handsomely mounted. The film’s cinematographer, longtime Lin collaborator Stephen Windon, again provides a gorgeously shot and lavish looking film, from the tropical beauty of a fictional Central American country to the ancient splendour of Scotland’s capital, and against this backdrop it’s hard to make a film to wasteful of the landscapes upon which the film transpires. And yet F9 achieves this, as explosions, crashes, vehicular stunts and gravity-defying nonsense ensue the backdrops become mere whirlpools of light and shade for all the impact they have and make; they could have set and shot F9 in a split-level carpark for all the wonder and mystery Windon’s access to luscious locales gives the movie. In keeping with the franchise’s long-standing luxury car aesthetic, there are moments where utterly inappropriate vehicles are used as battering rams and catchers mitts for the high-octane antics, a facet of the franchise that I’ve felt has long since worn out its welcome. An early sequence has Michelle Rodriguez’ Letty being flung about the jungle by an increasingly desperate series of explosions only to be repeatedly caught on the hood of Dom’s pursuing car, without a single serious injury to speak of.

Repetitive superhuman feats become par for the course in F9’s bombastic propulsion of plot, with Diesel’s Dom Toretto again exhibiting the kind of impervious physique normally reserved for characters in the Marvel Cinematic Universe. That’s not to say Dom – nay, any of the characters in this franchise – have ever done stuff that absolutely exceeds the limits of human capacity, but in the past it’s all felt like there’s some kind of stakes behind it. Some element of risk. Sadly, no such risk appears in F9: not a single moment in this film did I think one of the characters might die. Heck, one of them who was dead comes back, accompanied by one of the stupidest and more asinine plot twists of any Fast film to-date, and I include Michelle Rodriguez’ character returning from the dead in the credits of Fast Five in that list. 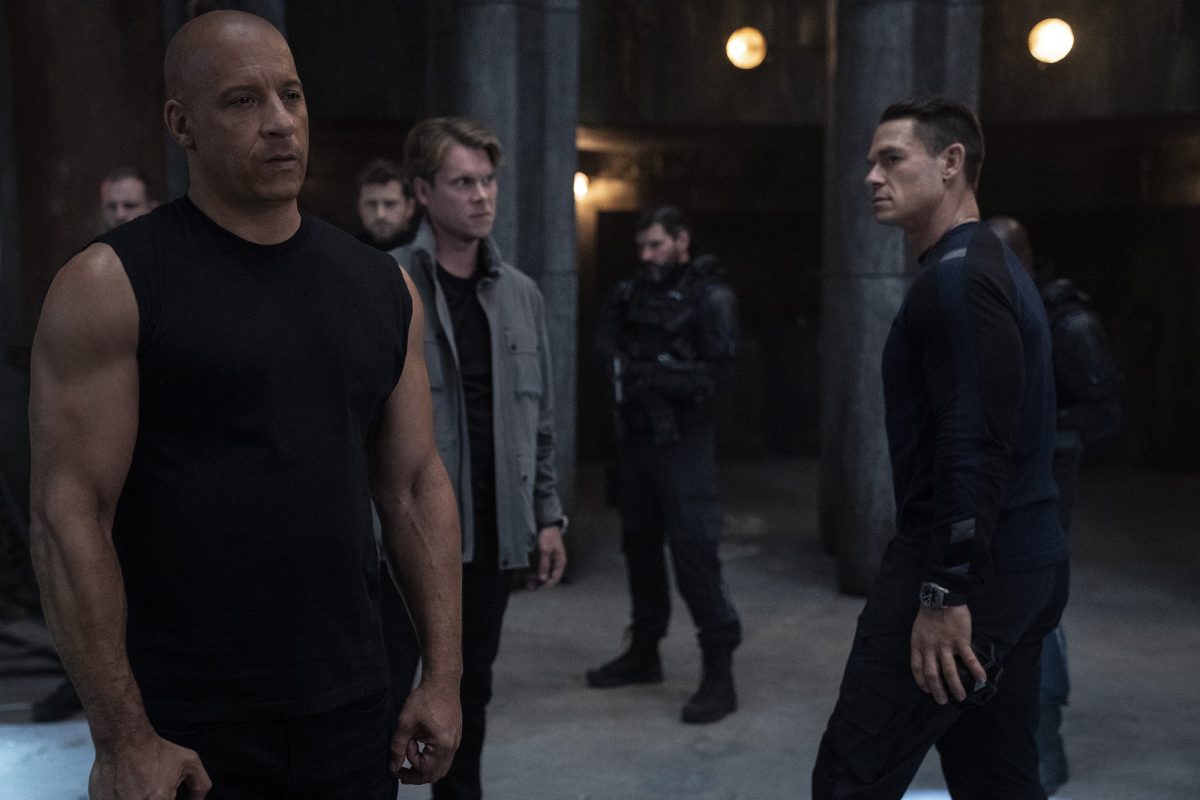 Critiquing the cast and acting in a Fast film feels like flogging a dead dog in a backalley, but it’s worth noting that not a single one of the people involved here comes away clean. Vin Diesel’s performance looks and sounds like a condom full of walnuts angrily shitting out thumbtacks. Michelle Rodriguez’ work as Letty, whilst the closest in the film to representing actual how an actual human being might approach this material, is encumbered with being the film’s heart-and-soul almost by accident, while franchise bit-player Jordana Brewster, whose character Mia inexplicably leaves the late Paul Walker’s character at home minding the kids while she cavorts across the globe being shot at, reminds me once again that she absolutely, positively cannot act to save her life. In the prime villain role is John Cena, who flexes and grimaces his way through a nothing role with the flint-eyed gleam of a former pro-wrestler angling to usurp Diesel in the leading man stakes, but not even his natural screen charisma survives the avalanche of action beats he’s forced to endure. Series’ comedy-relief pairing of Tyrese and Ludacris makes a solid fist of delivering unfunny material with really awful timing; frankly, they’re the worst part of this terrible movie and that’s saying a lot. Nathalie Emmanuel collects a paycheck as Ramsey (seriously, why is she here again?) while cameos to Kurt Russell, Helen Mirren and Charlize Theron (all reprising their roles from previous films) fall flat and hollow with import and impact. Even the lauded return of Sung Kang’s Han, via a hashtag movement on Twitter, is stupid and doesn’t earn the sense of awe and surprise it deserves. Lin, cheeky fellow that he is, also brings back Tokyo Drift players Lucas Black, Now Wow, Jason Tobin and Don Omar in minor roles that feels shoehorned in for fan service, rather than for any legit storytelling purposes. 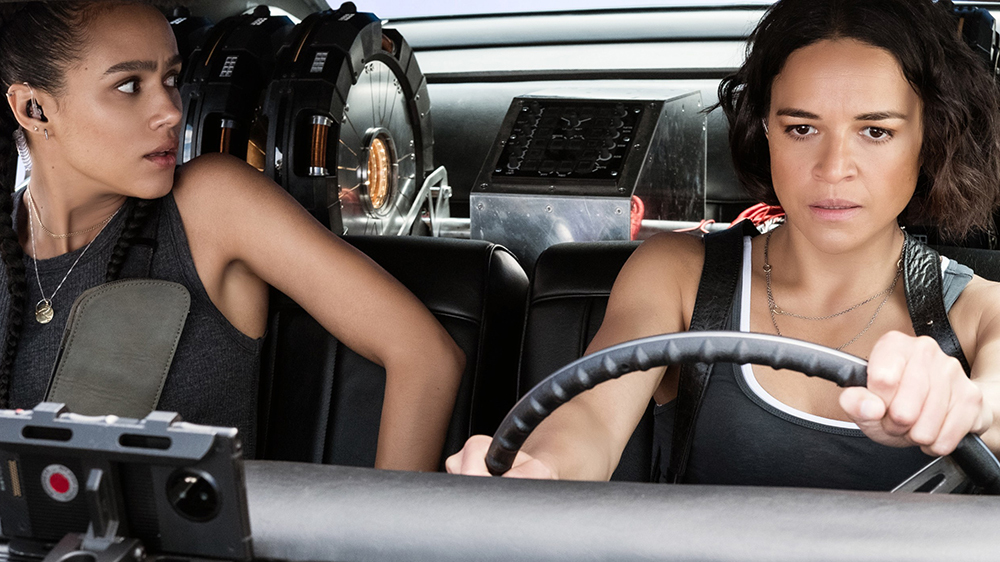 F9 is a stupid, terrible, mess of a movie. It takes all that’s fun and enjoyable about the Fast Saga films and evaporates the enjoyment and fun leaving only mindlessness and implausible action accompanied by impractical science – Ludacris at one point asks us to trust the numbers and math, at which point in this film irony dies – as Lin goes for broke. The only thing broker than Lin’s direction is the film’s sense of optimism and groupthink love, replacing family and friendship with wooden, hackneyed tropes and plenty of bombastic action sequences devoid of the magical stuff the previous nine films (including Hobbs and Shaw) had in spades. That there’s two more films to come after this makes me hope that Lin (or whoever writes and directs them) rights the ship early before the whole Fast Saga plunges off the cliff of diversionary realism into complete mindless oblivion. As it is, F9 is a gigantic engine-revving misfire.