As preposterous as the last couple of Fast & Furious instalments have been, none of them will prepare you for the physics-defying antics of Hobbs & Shaw, a spin-off film utilising the raw action chops of both Dwayne Johnson and Jason Statham, reprising their popular roles from the main series that has become Universal’s surprising cash cow. Described as “dumb” and “stupid” but entirely “entertaining”, Hobbs & Shaw serves up yet more testosterone-driven shenanigans that are as far removed from the original streetracing brief of the original Paul Walker/Vin Diesel starring actioner as you can possibly get. Featuring Idris Elba as an amped up villain and rising star Vanessa Kirby as the requisite female asskicker, Hobbs & Shaw will not once challenge your intellect but, if you try really, really hard, may just be the tonic for a “brainless action romp” if you ever need one. 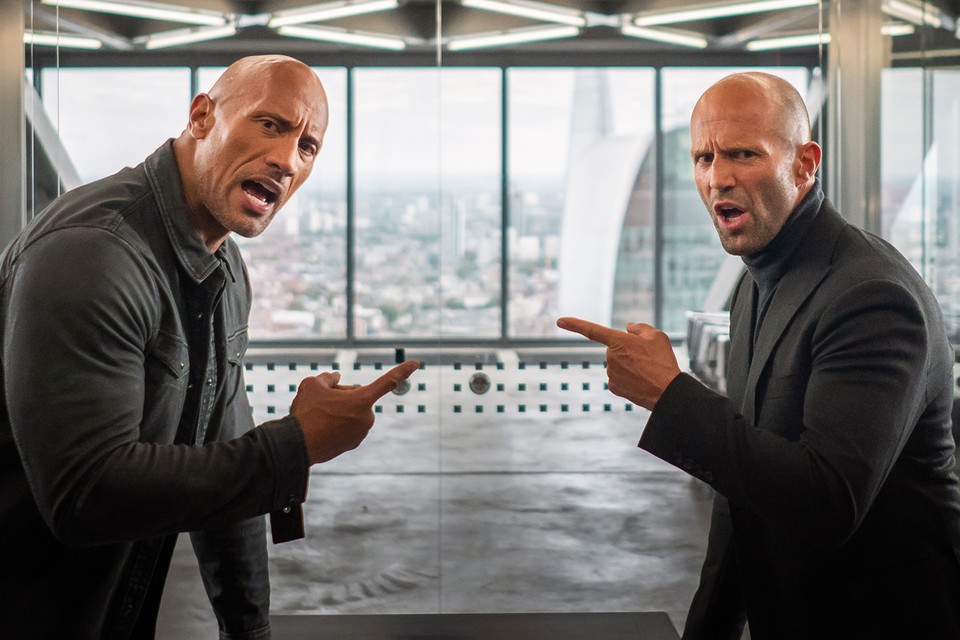 At the behest of their respective governments, DSS Agent Luke Hobbs (Johnson) and former mercenary Deckard Shaw (Statham) are brought together to track down violent cyber-terrorist Brixton Lore (Idris Elba), an enhanced human hoping to track down a synthetic virus known as “Snowflake” that has been injected into Shaw’s sister, MI6 agent Hattie (Vanessa Kirby). Lore, working for the mysterious organisation known as Etion, hopes to instigate human extinction to further his cause; Hobbs and Shaw take Hattie to Hobbs’ family home on Samoa, where they meet his estranged brother Jonah (Cliff Curtis) and make a last stand against Lore and the countdown clock of the virus becoming airborne and wiping out most of humanity. 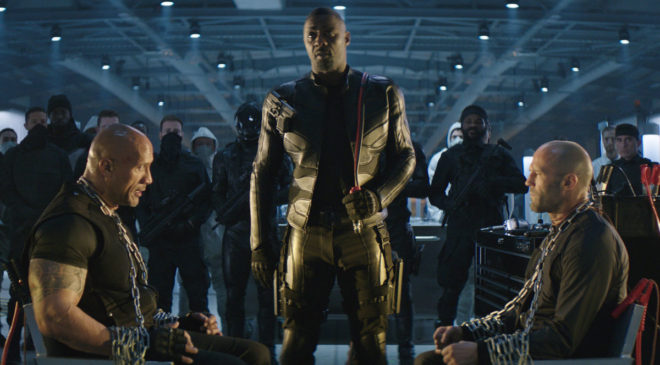 From the ridiculous to the sublime, Deadpool 2 director David Leitch latches onto the utter insanity of the Fast & Furious franchise and goes hell for leather to bring us one of the craziest action films of 2019. It’s also one of the stupidest, with every second line of dialogue attempting to fuel inject humour into the bland plot and featureless characters and failing almost utterly. Written by Iron Man 3 scribe Drew Pearce and Furious regular scripter Chris Morgan (Fast & Furious 3, 4, 5,6,7, 8, and the upcoming 9th film!), Hobbs & Shaw makes the most of showcasing the brawn and screen charisma of its two leading men, both of whom have their moments to shine as they bicker like an overly-muscular married couple in order to accomplish their mission. It’s not a clever script, nor are the characters really that well developed – let’s face it, the Fast & Furious films have become predominantly live-action cartoons with snappy one-liners, fast cars, nonsensical stunts and a bevvy of scantily clad women, so this film doesn’t have much to live up to – and the logic involved in this astonishingly silly premise exists in a complete vacuum. 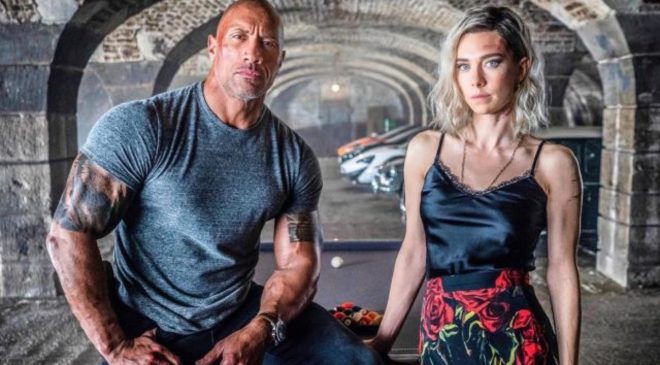 That said, watching beefcake Johnson and English hardman The Stath™ go at each other for two hours isn’t a total waste of time, if you’re prepared to overlook just how stupid it all is. The production design is decent, the supporting cast once more dominates (Helen Mirren as the Shaw matriarch? Hell yes!) and the action sequences will surely rattle your home theatre systems with their overly obnoxious sound design and hysterically laughable idiocy. Watching Johnson flex his muscles clasping an enormous chain attached to some kind of Apache helicopter as it swoops from the sky is something you might expect in a Marvel movie, not so much a car chase franchise like this, but here we are. Vanessa Kirby totally out-acts both her leading men, as Hattie, and more than holds her own in the ass-kicking department; the forced romance between Hobbs and Hattie is cringeworthy to say the least, and the least pleasant aspect of this entire outing. Cameo appearances by Deadpool actor Ryan Reynolds and regular Johnson co-star Kevin Hart in minor roles are overplayed significantly, while the Samoan interlude in which we meet Hobbs’ extended family falls utterly flat – Cliff Curtis is a great actor, but not even he can salvage the climactic showdown with his hirsute rantings – but it’s all played with such gusto and ballsy flair you kinda find sense in the nonsense. If you squint. And look in another direction. 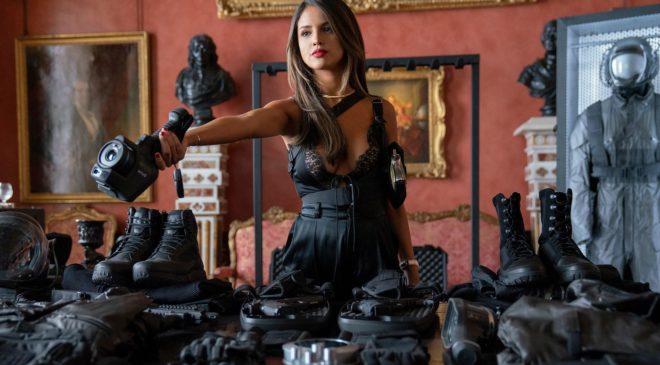 Cynics will rave about the death of quality cinema, and I guess if your preferred diet is junk cinema then Hobbs & Shaw is representative of all that is shallow and nutritionally deficient in modern Hollywood blockbusters. Horses for courses: you’ll either enjoy this piffling mediocrity for the empty spectacle it is and was always intended, or you’ll hate it for the preposterously inarticulate narrative heft it shoehorns into its raucous action kinetics and rambunctious “boys will be boys” showpony escapades. The thematics of “family” that are omnipresent in the main Furious films is absent, replaced by something similar yet entirely unworkable – does anyone think for one minute that Vanessa Kirby and Statham could actually be siblings, given The Stath™ looks increasingly like he’s been hewn from a Wembly grandstand? – and yet, for all its cheese, all its bluster and juvenile buffoonery (and it is resoundingly juvenile), there’s something positively relaxing about a film in which the collision of two of the most Furious of co-stars is its mission principale. Things go fast, things explode, bodies and vehicles entirely circumvent the laws of physics, and Dwayne Johnson continues to fail to fit his entire body into a single frame of this absolute nonsense. 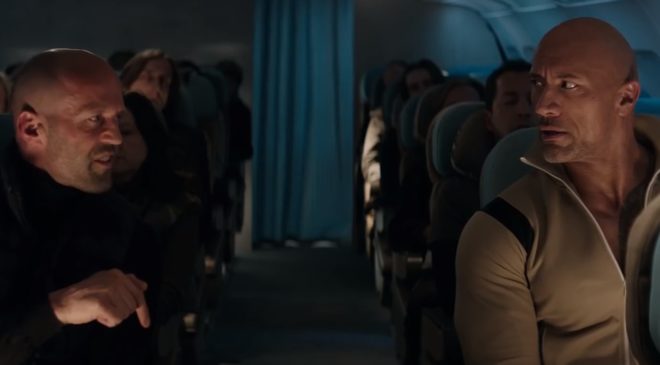 Nonsense aside, the film is kind of inert, almost placid, despite the concussive actions of those on screen; the Furious films by-and-large have held together a scintillating sense of kinetic energy in both their action sequences and their sprawling ensemble work, all of which somehow just works despite the weight of expectation to deliver a cohesive film. Hobbs & Shaw, lacking the bowel-churning rumblings of Vin Diesel, the blonde-shock surfer boy enthusiasm for the late Paul Walker, or the forest of trees woodenness of Jordanna Brewster, seems to get lost inside itself, trying to up the impossible ante the franchise has become renowned for, and somehow missing the mark. Without that central heart, that core of family and familial appreciation by the audience, focusing your film on supporting characters and their arcs seems to have led the series off the rails a touch. Not that it was ever really on them, but you know what I mean. The film sets us up for a sequel (or at least have these characters appear in a main Furious film to come) which may have some of you rolling your eyes but at least these harmless nothings of cinematic popcorn satiate an appetite for gratuity I never knew I needed. 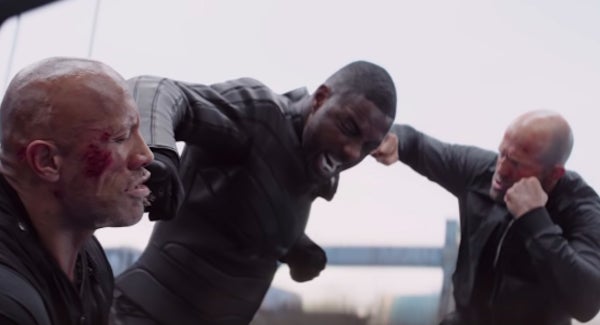 Hobbs & Shaw is patently ridiculous and entirely preposterous, and the shallow, inane shoutings of its lead cast will no doubt wear out their welcome to many a reticent viewer. Furious fanatics will lap up the defiance of logic and science on display here, and everyone else will no doubt wonder what all the fuss is about. I had a good time with it, but it’s worrying to see this behemoth of a franchise suddenly display a chink in its unassailable armour: when it moves away from the characters we’ve come to know and love, things don’t quite fire on all cylinders like they ought.