Borrowing liberally from the likes of Edge of Tomorrow, Back To The Future and Terminator, Chris Pratt’s latest big-screen adventure is transplanted to the smaller screens of Paramount+ thanks to the Covid-19 pandemic and although suffering from a shitload of been-there-done-that-itis, The Tomorrow War is far from a car-crash (the trailers weren’t hopeful) and better than I expected. For a film with virtually zero marketing, or online buzz, this lengthy sci-fi opus works for the most part, although Chris McKay’s direction stumbles over the very thing we ask of these kinds of blockbusting escapades, and that’s heart. With a wibbly-wobbly timey-wimey narrative and several gaping plot holes to paper over, Pratt and co-stars Yvonne Strahovski, JK Simmons (Whiplash) and Sam Richardson (Ghostbusters) go toe-to-toe with some remarkably ferocious alien creatures hell-bent on decimating the Earth, preposterously outgunned and yet still within reach of victory. 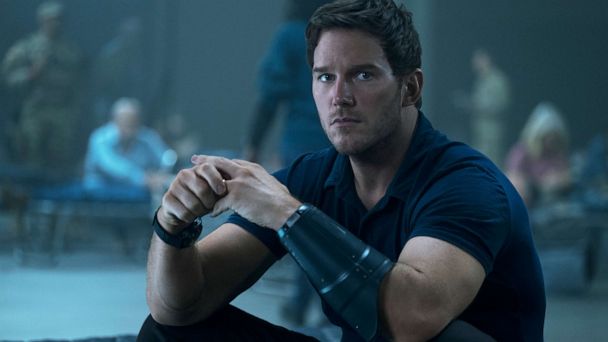 Biology teacher and former Green Beret Dan Forester (Pratt) is as surprised as anyone watching the Soccer World Cup in 2022 when an enormous portal opens up during a match and a group of soldiers emerge claiming to be from a war thirty years into Earth’s future. It seems the planet has been overrun by vicious alien creatures nicknamed Whitespikes, deadly dangerous and exceptionally hard to kill. Humanity in the future is fighting a losing battle; the Governments of the Earth band together to send people from the present day into the future to help with the war, although the losses are staggering. Civilians are conscripted in a global draft, and when Dan is recruited he leaves behind his wife, Emmy (Betty Gilpin – The Hunt) and young daughter, Muri (Ryan Kiera Armstrong). Flung into the heat of future battle, Dan soon regains his muscle memory from his combat years, and leads his team into action to salvage research for Colonel Forester, whom it turns out is Muri all grown up (Yvonne Strahovski – The Predator); she is working on creating a toxin to kill the creatures, something she hasn’t had until now when her scientist father arrives. Together, father and now older daughter work to find a solution to the war which has brought humanity to the brink of extinction. 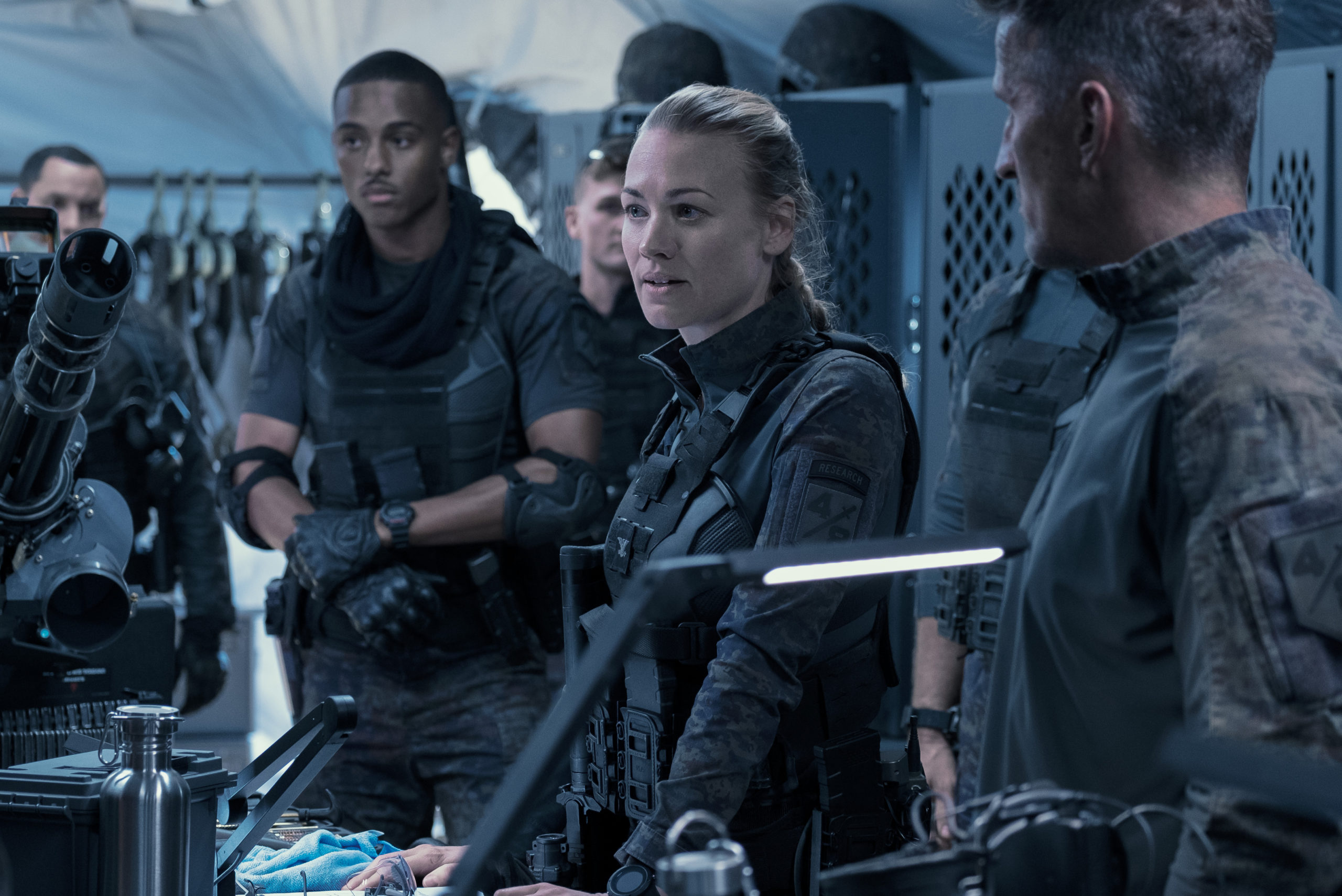 The Tomorrow War marks Chris McKay’s debut feature in live-action, having cut his teeth on directing with The Lego Batman Movie, and you can see the gears grinding into place all over the place here. From a screenplay by Zach Dean, McKay’s work on The Tomorrow War is fast and frantic throughout the lengthy action and battle sequences, yet fumbles when dealing with the film’s crucial emotional nexus, the relationship between Pratt’s Dan Forester and Strahovski’s Muri. It takes a cheesy, somewhat predictable route with piecemeal callback elements and a thin throughline of family, even wasting JK Simmons as Dan’s estranged and belligerent father with an obvious transition from anger to reconciliation that smacks of Randy Quaid’s turn in Independence Day. Which, incidentally, is another film this project has cribbed some ideas from. The film opens strong, with a brief flash-forward to Pratt descending from the sky into Miami Beach to almost certain doom, before reverting to a cloying nuclear-family narrative that offers “character development” of such restricted impetus the movie almost grinds to a halt at one point. Once Pratt and the platoon of future-bound civilian warriors catches up to the story’s main plot point – going into the future – the film kicks into gear and is really rather entertaining, only sputtering here and there whenever Pratt and Strahovski, playing father and daughter, try to come to terms with their temporal uniqueness. 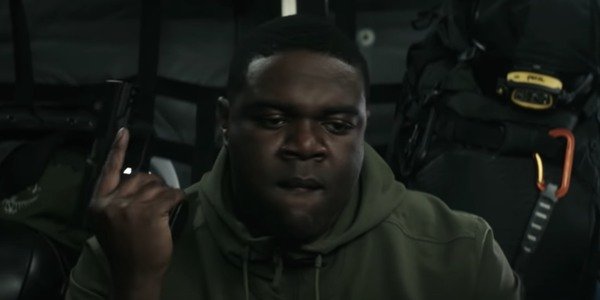 As with any film dealing with time travel, plot and logic issues rear their heads in multiple ways for those who like to think during a movie; exactly why people from the present are chosen rather than those closer technologically to the future time, is unclear, although the film does go out of its way to swerve around the infamous “grandfather paradox” more than once. If logic isn’t really something you pay much attention to, you’ll enjoy The Tomorrow War a lot more than I did; the action sequences are ferociously directed and grand in scale, to the point I actually ached with loss that the film couldn’t be enjoyed on the big screen, and the visual effects are mostly exceptional (a couple of hazy wide vista shots do struggle a touch, or at least did for me) whilst the sound mix is, as you’d expect, phenomenal. McKay understands action choreography and where to place a camera to maximise the film’s visceral, often enormously tense moments of combat, and this skill comes in handy as Pratt, Strahovski, Edwin Hodge’s embittered veteran, and Sam Richardson’s chatterbox scientist alumni all take turns in displaying the requisite amount of square-jawed gung-ho sweaty-sweat to deploy violence upon the invaders wherever possible. 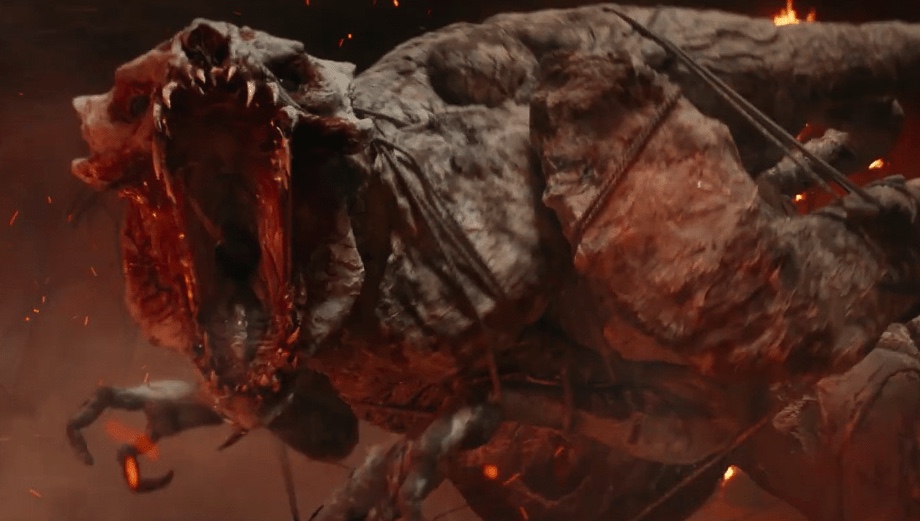 In terms of performances, Pratt makes a solid if unremarkable leading man; he’s bland and charisma-free, although the occasional glimmer of comedic gold peeks from behind the chisel-jawed grimace he sports constantly. Strahovski is burdened with the unenviable task of making Pratt look patriarchally neutered whilst maximising her own character’s hefty expectations: I really liked the actress in this and she commits to the role superbly, even when faced with some truly asinine lines of dialogue. Sam Richardson’s natty Charlie, a nervous-nellie thrust into battle and who maintains a fairly cheery disposition throughout even when faced with utter horror, is the film’s comedy relief and by goodness he earns his paycheck, because without the few laughs jostling for view amid the low-key blood and gore (there are a lot of alien carcasses left wrung upon the screen) The Tomorrow War would be a fraught, mindless affair. JK Simmons sports a biker beard and singlet for the role of Pratt’s garrulous dad, and although he’s entirely wasted in the role it’s at least good to see him having some fun with his career trajectory and taking us for a ride. Betty Gilpin also has a thankless task here, acting opposite Pratt as the present-set harangued wife, and she makes a good fist of things considering her role is relegated to the third tier. It’s also great to see Mike Mitchell (Love) and Mary Lynn Rajskub (Brooklyn Nine Nine) playing roles you wouldn’t normally expect from them. 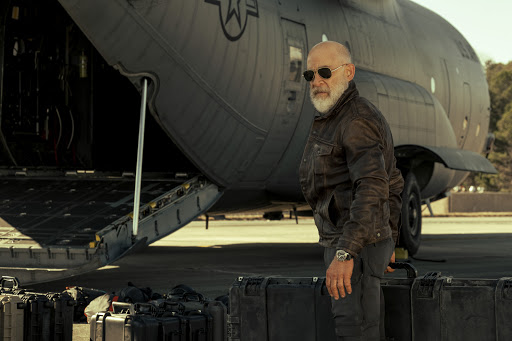 The Tomorrow War runs at least forty minutes too long, contains one hell of an extended coda-turned-denouement, and has some pretty abyssal plot holes you can spot a mile away, but for a cheesy, superficially stupid blockbuster it delivers rousing spectacle and more than a few moments of legitimate entertainment. It’s not perfect, and Pratt still isn’t capable of turning himself into a bona fide A-list star away from the comfort of the Marvel Cinematic Universe, but The Tomorrow War will divert you from whatever horror is unfolding on social media long enough to maintain your interest. Sitting comfortably in the wheelhouse of the likes of Peter Berg’s Battleship, Jonathan Liebesman’s Battle: Los Angeles and a touch of Edge of Tomorrow, McKay’s The Tomorrow War is expensive looking drivel loud enough to keep your eyes on the screen but without the emotional core to really resonate.