The runaway success of The Lego Movie was always going to produce a sequel; the law of Hollywood virtually made it a lock. Cannily, the producers decided to play to the strength’s of the film’s most popular character in Batman, choosing to give the gravely voiced caped crusader a solo film (of sorts) following the established Lego aesthetic. The Lego Batman Movie avoids almost any link narratively to The Lego Movie, although it does sprinkle in some previously established voice talent in iconic roles (Superman is once more voiced by Channing Tatum, for example, whilst Jonah Hill briefly reprises Green Lantern), and the end result of this wickedly funny, deliriously joyous animated venture is one of equal, if not better, returns on the film which spawned it.

Batman (Will Arnett, who surely must have needed a lozenge after his recording sessions) is the hugely successful and popular guardian of Gotham City and its denizens, repeatedly capturing the city’s famous rogues gallery including the Joker (Zach Galifianakis), Poison Ivy (Riki Lindholm), and Harley Quinn (Jenny Slate), all at the behest of the retiring Commissioner Gordon (Hector Elizondo). The Caped Crusader is, however, exceptionally lonely in his one-man fight on crime, living alone in his enormous mansion with only butler Alfred (Ralph Feinnes) to accompany him. Change is coming to Batman’s life, however, as the Joker is becoming more frustrated with the hero’s apparent disdain for their “relationship” of good-versus-evil, and seeks to up the ante and decimate Gotham City in a petulant display of emotional blackmail. Meanwhile, local orphan Dick Grayson (Michael Cera) worms his way into Batman’s life thanks to an indifferent Bruce Wayne agreeing to adopt the urchin, resulting in the boy becoming Robin, while replacement Commissioner, Barbara Gordon (Rosario Dawson) questions the usefulness of a solo vigilante in fighting the ever-increasing crime rate in the much maligned city.

Overseen by Chris Miller and Phil Lord, wunderkind directorial team behind Cloudy With A Chance of Meatballs and The Lego Movie, Batman’s first Lego adventure isn’t so much a solo movie as it is a widescreen ensemble assemblage of top-tier voice talent, a virtual orgy of one-liners, pop-culture meta references and silly, banal, cutting and edgy humour, and expectedly dynamite animation. Honestly, there’s so much going on on the screen in The Lego Batman Movie it makes one’s eyes hurt trying to take it all in – I suspect the multiple viewings my children will demand of this film will allow me to eventually take in every minute detail director Chris McKay, who served as Animation Director on The Lego Movie under Lord and Miller, has inserted into it. The film opens with an epic action sequence involving Batman and his entire (and I mean entire) rogues gallery from the comics, before settling into its genteel narrative about searching for a family and never being alone. Bruce Wayne’s mandate to fight crime to avenge his parents’ death is touching, and the film echoes the comic book lore superbly well, but the addition of not only Robin but Alfred (a terrific Fiennes, who could also have voiced the Lego Voldemort here but didn’t) as well as Barbara Gordon, who we know will become Batgirl at some stage, expands the hero’s family of players and attempts to make him a more rounded, emotionally accessible character.

Part of Batman’s charm in The Lego Movie was that he was effectively an impenetrable loner, emotional vacant and content to write death metal tunes and rock out with the lads from Star Wars. It was essentially a running gag that Batman only really thought about himself, looked out for himself, and only did stuff if it benefited himself. Not exactly the easiest character to really root for in a stand-alone film, by any stretch. Bless them, writers Seth Graham-Smith, Chris McKenna, Erik Sommers, Jared Stern and John Whittington have focused on buffing off the harder edges of the Lego Batman character and making those perceived emotional weaknesses part of the story’s central tenet: making him relateable. Rosario Dawson’s Barbara Gordon, who exists in much the same punchy style as Wyldstyle from The Lego Movie, right down to the hair flick, is the catalyst for the majority of Batman’s change throughout the film, and their combative relationship is not only obvious but somewhat predictable. The glee of this part of the film is listening to Dawson and Arnett work off each other with their vocal talents, and they lift this part of the script considerably. 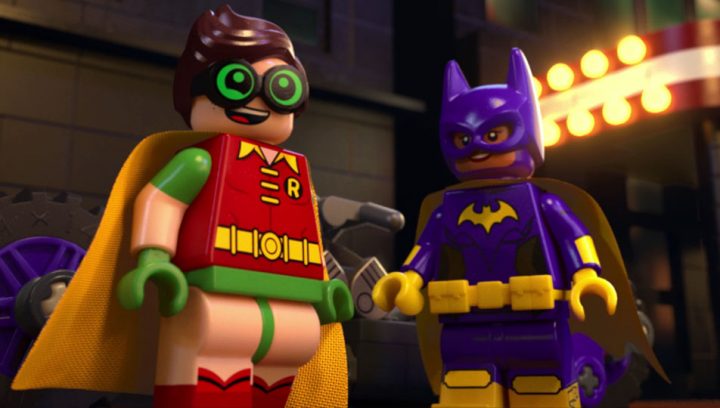 The surprise package for me was Zach Galifianakis, playing the Joker. Rather than merely imitate the other great voice of an animated Joker, Mark Hamill, Galifianakis plays the role with a leering, snivelling edge to him, a villain desperate for not only attention but emotional acceptance, something I’d not have expected in any version of Batman’s arch-nemesis. While the rest of the cast served the rat-a-tat story well, and the rotating avalanche of vocal cameos kept one guessing throughout, Galifianakis (for me) actually found something new in the Joker than I’d not seen before, and that was a sense of humanity. Much of the best Joker stuff in the comics is derived from the character’s utter lack of humanity, a psychopath devoid of an ounce of compassion, sympathy or even reason; this Joker has that, and actually makes him a more introspective person than the largely unapproachable Batman. Well done to the writers for making this Joker a screen villain with a different kind of edge. 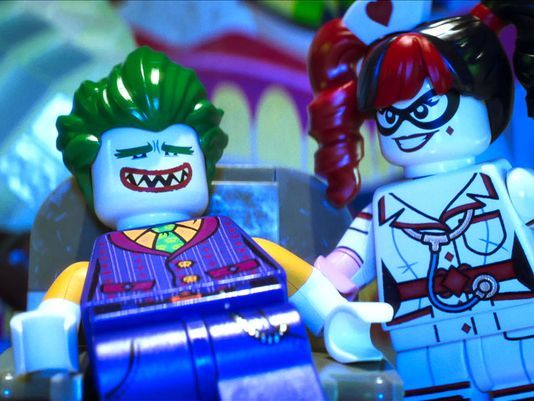 Much like its predecessor, The Lego Batman Movie is really just a flood of jokes both visual and aural, a bombardment of animated cool and clever designed to keep even the most attention-deficit-affected child glued to the screen. As I mentioned, there’s simply so much going on the screen at any one time – especially during the frantic, clever but hugely cluttered action sequences – there’s every chance I was guffawing too much and missed a lot (the callbacks to every Batman film in history made me almost pee my pants) of the references (the sight of every Batmobile to grace the screen actually made me hoot-n-holler!) and if you’re not paying attention you’ll miss a fair bit. The film is literally stuffed with DC lore and mythology, but at the same time works in such meta ways you just can’t quite believe it. If you never thought you’d see Gremlins, King Kong, Daleks, Agent Smith and Sauron all in the same movie, this is the movie for you. Hell, even the Jurassic Park Velociraptors are thrown in here, adding to a Greatest Screen Villains list that simply has to be seen to be believed. As a fan of cinema, I was all over it – funniest to me of all was the callback to Batman ’66’s “shark repellent” joke – but a lot of it will go over the younger viewers’ heads. That’s fine, though. It’s bright, loud and busy enough as it is.

The Lego Batman Movie is more than a worthy successor to The Lego Movie, I think it surpasses it in many ways. If there is a flaw to Lego Batman it’s possibly that it moves a little too quickly, and tries to jam too much in, but hell if it isn’t a satisfying commercialised advertisement for Lego and the DC Universe. If only the live-action films from DC were this much fun! Beautifully animated (by Aussie animation house Animal Logic, who did The Lego Movie as well), well written and performed, and funny as anything you’ll see this year, The Lego Batman Movie is raucous, gargantuan, crowd-pleasing entertainment suitable for all ages, which is rare in a children’s film outside of Pixar these days.