Marketed as a biting social satire, Craig Zobel’s The Hunt is a film in search of a controversy. The plot is a fairly basic “humans hunting other humans for sport” genre entry, and to be honest it’s been done better elsewhere (at least in terms of emotional impact, if not entirely in bloody gore and brutality), so you’d think a film in which “liberal elites” and “deplorables” fight each other to the death would appeal to the most rancid of far right and left audiences. What transpires is a magnificently bloody opus that doesn’t go quite where you think it might, but suffers from tin-eared dialogue and a lack of honest social commentary on the anger between the bitter, bitter rivalry of America’s partisan divide. 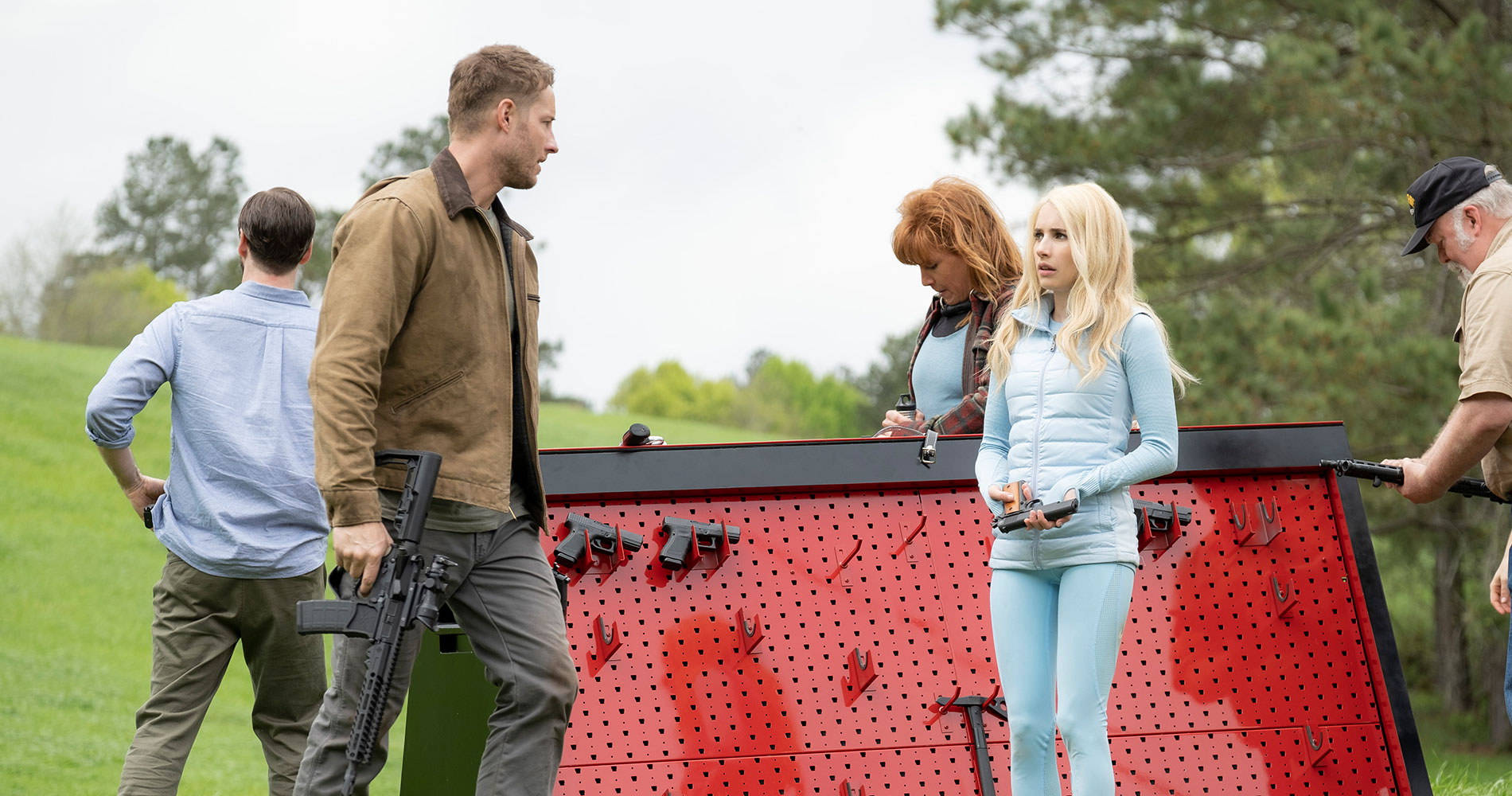 A group of random strangers awake near a clearing in some unknown part of the world. As they approach a mysterious crate sitting silently for them, they are surprised to learn the crate is filled with weapons. Before they have a chance to get their bearings, hidden people start shooting at them, scattering the group into the nearby woods, where most of them are picked off by increasingly bizarre and brutal booby-traps. One survivor, Crystal (Betty Gilpin) and a reluctant second, Don (Wayne Duvall – Richard Jewell) manage to turn the tables on their attackers, learning that they themselves, mostly Trump supporters kidnapped to be hunted by liberal elites for fun, are trapped in a foreign country. Eventually, Crystal tracks down the ringleader of this operation, the mysteriously motivated Athena (Hilary Swank), facing off for their very survival. 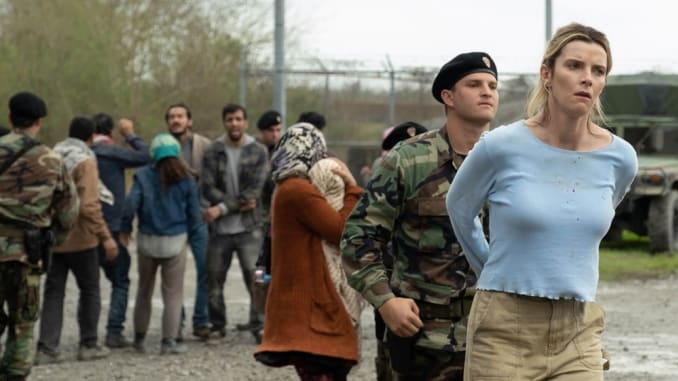 American politics has become so embittered in recent times it’s little wonder The Hunt kicked off a firestorm of controversy before it was even released. Once the film’s salacious plot got out into the open, it was ripe for being torn apart by both sides of the partisan fence. Of course, liberals hunting Trump’s “box of deplorable” supporters was always going to generate interest as far as subtexts go, so it’s something of a let down that The Hunt, for all its bloodthirsty ferocity, is so anaemic with its social commentary. Written by Damon Lindelof (Star Trek Into Darkness, Cowboys & Aliens) and Nick Cuse, The Hunt attempts to inflame the resentment between the right wing aspects of the both liberal and conservative American political spectrum. It’s a film littered with Trump-era trash-speak, phrases such as “cultural appropriation” and ideas about abortion, religion and democracy are shoehorned into what is a pretty tight action thriller, and all these attempts by the writers to poke the bears on both ends of the seesaw ring hollow when spoken out loud. I’m sure insulting dialogue torn from the headlines of today’s politics might have sounded cool in the writing room, but when actually delivered by characters as a way of underpinning motivations or eliciting reactions, the film’s dialogue more often than not feels forced. The film feels to be trying too hard to generate anger. 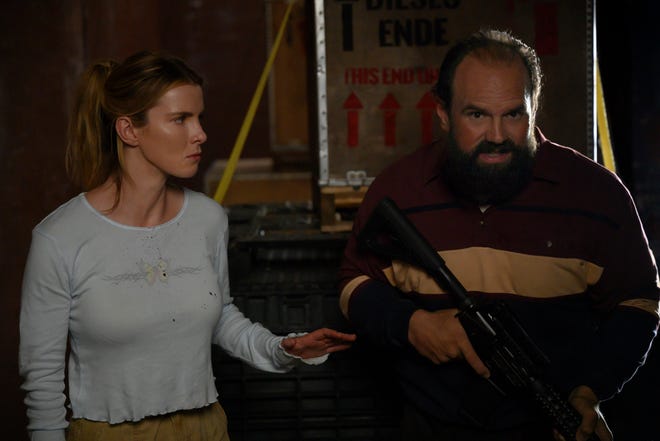 On its own terms, The Hunt’s brutal violence and stylish direction from Zobel will entertain for sure. Bodies are shredded, blown up, garroted, defenestrated, mangled and treated quite poorly in Zobel’s gleefully gory attempt to out-do Battle Royale, a film for which The Hunt owes a great debt. When it’s gunfire and grenades wreaking human carnage, The Hunt will appeal to the most sadistic among us and satisfy all but the hardest hardcore bloodhound. It’s interesting that Zobel chooses to start his film focusing on one character, who is promptly killed off early, before transitioning to another – who is, again, despatched almost as soon as we think this is our main character – until we’re left with Gilpin’s clench-jawed turn as Crystal, a combat experienced veteran who takes it up to those who would treat her as prey for sport. Bit parts to the likes of Ethan Suplee, Emma Roberts, Amy Madigan (as a ruthlessly violent elderly participant in the killing spree) and Justin Hartley (Smallville, A Bad Moms Christmas) are all notable names scattered throughout this film, but for the most part the cast are all relatively unknown. Even Betty Gilpin, who looks absolutely fiiiine in her cutoff top (echoing Sigourney Weaver’s Ellen Ripley or Milla Jovovich’s Alice from Resident Evil for tough-as-hell feminine sexuality) isn’t that well known outside America (she appeared in A Dog’s Journey and Stuber in 2019, and more recently appeared in the critical bomb The Grudge remake) but I’m suspecting that the more traction this film gets, the more her star will rise. She’s excellent, if underserved by a middling script, but her action chops and ability to sell a fight sequence (she carves up with the film’s hidden antagonist during the climax) hold her in good stead.

The Hunt is a glorious action film rife with political bitterness that never quite gels. It’s tone-deaf, an obvious film searching for cleverness with its rerouting political bile for our entertainment. Centrists will, much like myself, find much to laugh at (rather than with) and I’ve no doubt the right wings of both sides of the political aisle with rile up with disgust that a film could be so flippant and contrived with depictions of the other; either way, The Hunt’s political bite is rather toothless but its blood and gore will find a home in any cult classic roster.