Principal Cast : Melanie Laurent, Mathieu Amalric, Malik Zidi.
Synopsis: A woman wakes in a cryogenic chamber with no recollection of how she got there. As she’s running out of oxygen, she must rebuild her memory to find a way out of her nightmare.

Directed by noted French horror helmer Alexandre Aja (Piranha 3D, Horns, Crawl), low-budget Netflix thriller Oxygen (in French, Oxygène) is another one-man-show (although in this instance, one woman) confined to a single location of quite claustrophobic restrictions similar in nature to Ryan Reynolds’ vastly superior Buried or the more recent Tom Hardy car-drama Locke. Indeed, Oxygen plays like a female-centric Buried in more ways than one, although Aja is able to heighten the dramatic tension through some twisting, occasionally perplexing leaps in logic and believability. In helps when you have a lead actress as capable as Melanie Laurent (Inglourious Basterds) offering as committed a performance to quite literally nobody as it’s possible to get, and while the film gets lost in its own self-indulgence and reliance on silly plot mechanics, there’s just enough here to commit to a recommendation. 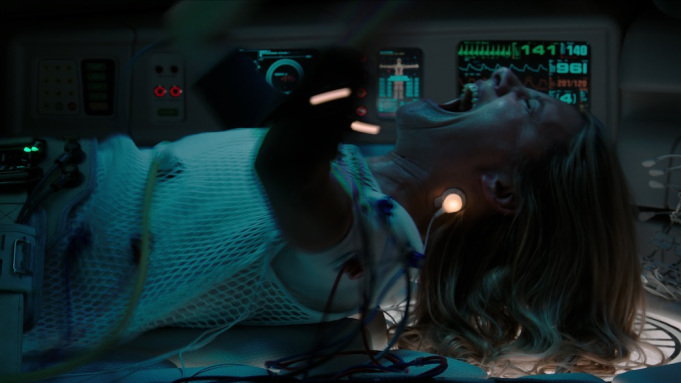 A woman, Elizabeth Hansen (Laurent – Enemy, 6 Underground) wakes up in a medical cryo-stasis pod with no memory as to why or how she ended up there. The pod’s artificial intelligence, nicknamed MILO (voice of Mathieu Amalric) refuses to give her information until she can provide certain specific answers, whilst she suffers continued memory surges of her past, including husband Leo (Malik Zidi). As the oxygen levels in the pod threaten to decrease and suffocate her, Liz must attempt to contact loved ones and the authorities to determine where she is, and who can come rescue her.

Oxygen is alternatively frustrating and enthralling throughout its quite stretched 100 minute running time. It is, for want of a better logline, Buried in space. It lifts wholesale from the Ryan Reynolds thriller in confining its unwilling participant to a single, body-sized cavity and throwing all kinds of hurdles to survival at her. I quite honestly expected Ryan Reynolds to pop in at one point and request a commission for helping write the damned thing; Oxygen’s screenplay is credited to Christie LeBlanc, and had I not seen the coffin-centric Reynolds feature I might have considered this film to be quite a good one. However, I have seen Buried, and this film is a poor replication of it. Oxygen mirrors the restrictive story location conceit with similar plot mechanics: the desperate calls from sketchy communications to loved ones in unseen locations, the requisite hallucinations of creepy animals (in this instance, cloned white rats) infiltrating the tiny domicile, and of course the ever-present threat of gradual suffocation and death from… well, whatever is outside the box.

When it’s not lifting from Buried entirely (which it is most of the time), one of the film’s strongest elements is the central characterisation of Elizabeth, played wonderfully by Melanie Laurent. The French actress delivers a committed and engaging performance as the bewildered, angry and terrified passenger inside the pod, resorting to arguing with the baritone-voiced MILO and flicking through computerised images on the holoscreen before her whilst simultaneously dodging unwanted probing and piercing from the AI’s dedicated medical protocols. I had to chuckle when the computer unflinchingly offers her a suicide option to save her from slow suffocation, and the moment MILO stated it was unsafe to open the pod to the outside I knew poor Liz had to be either in space or at least the upper atmosphere. Laurent is game for everything Alexandre Aja and the script can throw at her, and launches a surprising amount of emotion at the screen as the character transitions through all seven classic emotional states of grief. These kinds of one-man-band films only ever truly work if the lead actor is capable of delivering a performance that can carry such a desperate, unflinching movie. After all, the camera is on you all the time, without respite, so you need to be able to deliver your A-game every second you can. Laurent, for all the film’s faults, is largely flawless. 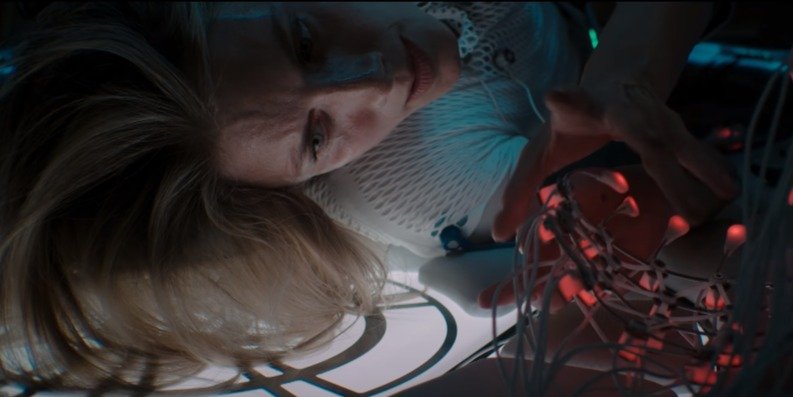 Thriller films using this one-actor conceit often fall into the trap of artificially ratcheting tension through means the audience never buys. Oxygen’s clumsy handling of its “the air is running out” plot device waxes and wanes between legitimate agency and high hokum bullshit – at one point, the oxygen level inside the pod drops quite quickly, before sitting on “critical” for about twenty minutes while Liz becomes more and more agitated, making very little sense as to how she’d still be conscious. That a pod designed to keep its occupant alive for as long as possible actually needs to be ordered to divert unnecessary power to life-support to prolong things was laughably silly (in my opinion) and a huge copout by the scriptwriter to prolong the already stretched-thin premise to breaking point and beyond. The film does trip up occasionally with its own self-importance, while the absent/ailing husband arc within Liz’s memories tend to drag a little too much and add bulk to a story that doesn’t need it. If you’re going to rip-off Buried, just rip off Buried and be done with it. Adding extra angst to the film slows it down and retrieves tension from a viewer only too happy to give the benefit of the doubt to the filmmaker as to why one should invest in this character. 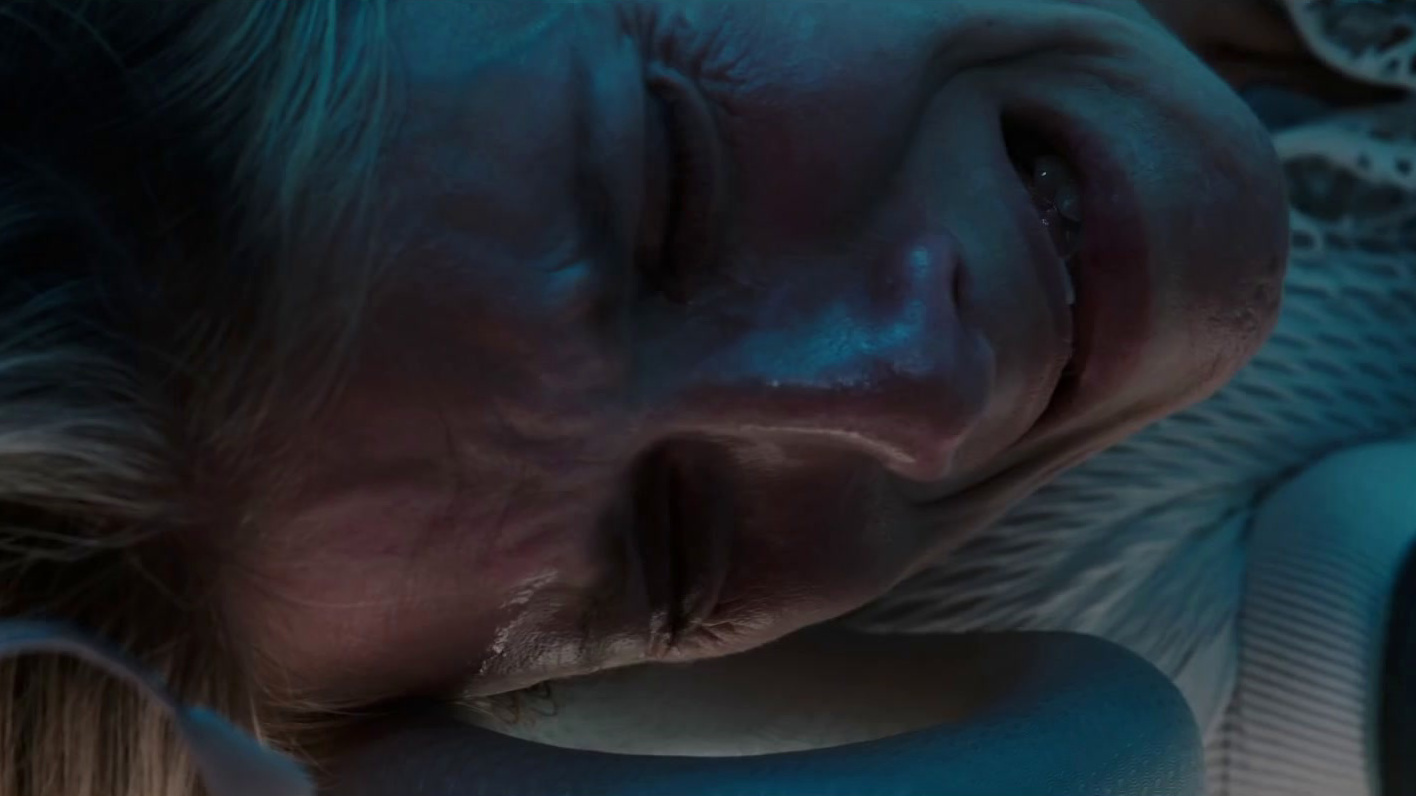 Oxygen does have some good points, however, although your mileage may vary. The production design is quite good – and the brief external viewpoint of the pod’s actual location late in the film is possibly the most breathtaking piece of visual effects I’ve seen for quite some time – whilst both cinematography and editing, as well as a subtle score from ROB (how they missed the opportunity to tap Jean Michel Jarre to score this though, I’ll never understand), all add to the atmosphere and tone of this crafty movie. The minutiae of the pod itself, the interior, is well designed if you don’t mind subtle nods to Apple; hell, they should have called it the i-Pod just for shitz-n-giggles. There’s tubes and cavities and all manner of screens and dials regulating the pod’s internal atmosphere as well as the condition of the human inside, and if nothing else it at least gives Laurent something to act against when she’s trying to figure out what the hell is going on.

Despite a committed performance from Melanie Laurent, and Alexandre Aja’s appropriately claustrophobic direction, Oxygen runs out of puff quite quickly when you realise it’s a film that’s been made before, and better. In and of itself there’s plenty to enjoy in Oxygen at a distance, and I give kudos for the French film industry for having a decent crack at a crossover thriller such as this, so I can recommend it for lovers of Euro cinema and the wonderful Laurent. Everyone else may find this film a bit too familiar, for good reason. Exhaustingly gorgeous, lusciously filmed and brimming with technical elegance, Oxygen ought to have been better for the promise it makes to the audience early on. That it settles for mere rip-off is enough to rail it with ridicule.