Desperately sad story of a woman who, due to circumstance, decides to live the life of an itinerant across the United States, Chloe Zhao’s highly anticipated Nomadland is a boring yawnfest. Strong words, I know, but it’s true: Nomadland is either the greatest film this decade or the slowest, most ponderous piece of pretentious bullshit you’ll see over the same period and I know on which side of the ledger I fall. After strong reviews internationally and decent word of mouth from sources I trust, I went into Nomadland with high expectations, a dangerous proposition indeed these days but I went in anyway. Zhao’s film is one that has obviously spoken to many people, captured a zeitgeist of financial ruin and subsequent fallout, but for whatever reason Nomadland didn’t resonate with me in the slightest. In truth, I found it quite the chore, although having to spend an hour and change with Frances McDormand doing any kind of acting is always a pleasure. 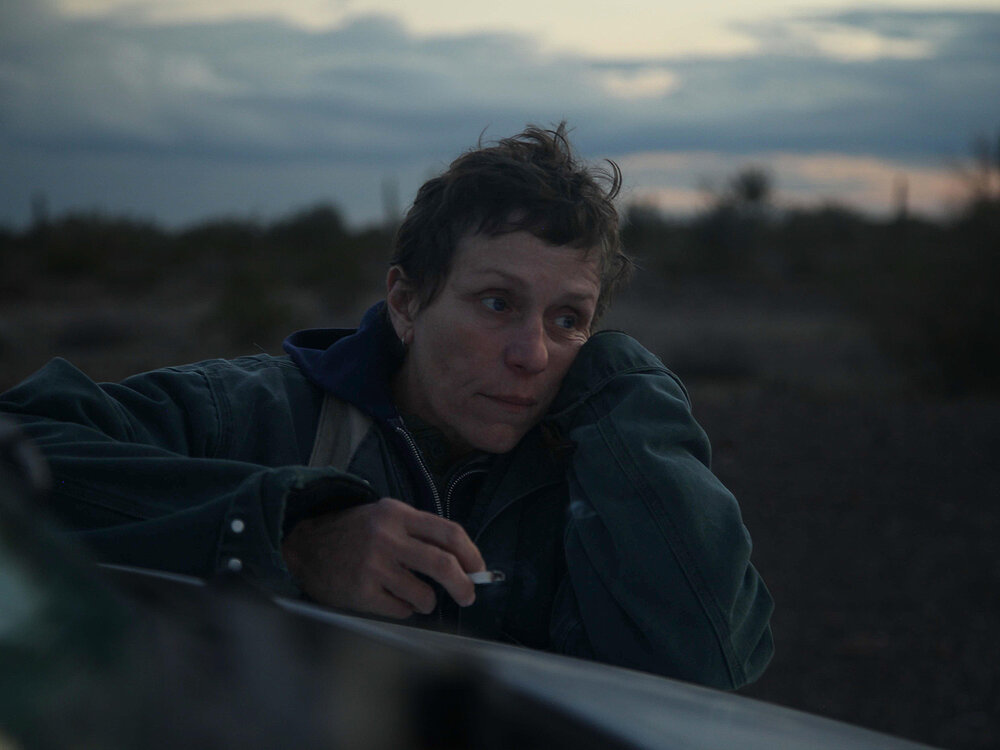 McDormand (Three Billboards Outside Ebbing Missouri) plays Fern, a middle-aged woman who has left her small town following the death of her husband to wander the highways and byways of America as a nomad, picking up transient employment casually for the likes of Amazon, national parks, or restaurants, whatever she can find. Along the way she meets a variety of fellow “vandwellers”, including Dave (David Strathairn – The Bourne Ultimatum), finding her way through the post-recession America in search of… well, something.

Ugh, I hate myself for not finding this film at all interesting. If I wanted to watch old people go camping I’d go ask my parents to hook up their caravan. The plight of many of America’s low and middle class citizens following the collapse of financial markets in 2008 is something still raw to many, many people, and while the likes of The Big Short showcase the why of it all, Chloe Zhao’s endeavour brings to the fore the who, which ought to be the saddest of all. Sadly, while Nomadland is sad, and has a few harrowing scenes of McDormand slumming it like a homeless old biddy as she shits in a bucket at the back of her van, the point of it all is lost entirely thanks to a meandering pace and ineffective sidebar characters. Fern’s relationships with people she meets along her travels, including the earnest Linda May (played by the real Linda May), the tragically sick Swankie (played by Charlene Swankie), and vandweller champion Bob Wells (who regales us with a heart-breaking story about his son’s suicide), aren’t as interesting as Zhao’s direction of McDormand’s wild-eyed performance might suggest they are, and the film’s ponderous idyll quickly runs out of steam. 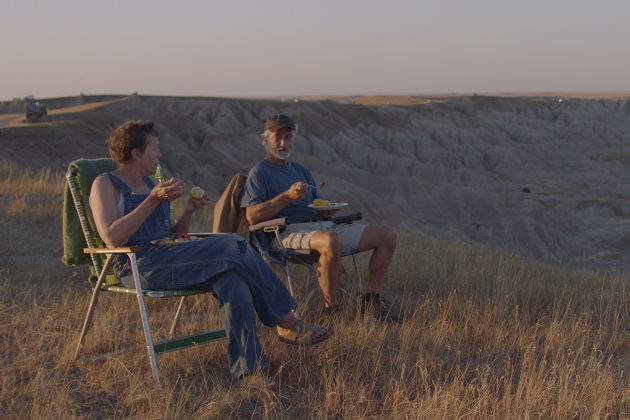 Nomadland is based on a non-fiction book by Jessica Bruder and adapted by Zhao (who received an Oscar nomination for her work as both writer and director, as well as for producing) and it comes at a prescient time when America is a country searching for a sense of itself again, following arguably the most tumultuous four years in living memory. The idea of older Americans choosing – or worse, being forced – to travel the country picking up odd-jobs to pay for their cross-country lifestyle is disagreeable to most, but a fascinating examination for a subculture or underclass the country seems uninterested in resolving anytime soon. Exactly why the producers felt it necessary to showhorn in a fictional character to an otherwise sad scenario to recount the book’s on-the-road text baffles me; had Nomadland been a pure documentary I think it could have sounded the klaxon for change with far more profundity instead of trading off McDormand’s ability to look homeless enough (I know, I know, she turns the phrase to “houseless” which makes it all the more palatable….), possibly a powerful and insightful recording of one of America’s least spoken of social issues. Chloe Zhao’s fictionalised film does contain some moments of beauty, such as the moment McDormand’s character abandons a puppy already abandoned by its previous owners, despite the exhortation of a trailer park owner, that provides gasping clarity on just how close to the breadline some of these folks live.  Between McDormand staring into the middle distance a lot and the continuous decision to film everything at dawn or dusk, however, Nomadland really is a shit-ton of time wasted achieving a little. 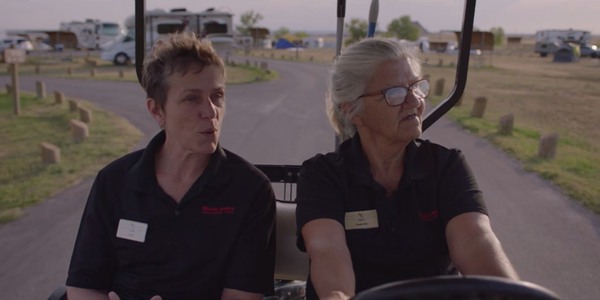 I would also argue that if you’re going to fictionalise the underbelly of American hypocrisy and social support it’s best to not include obvious real-world non-actors in key supporting roles. By including real vandwellers (“vandwellers” are people who dwell in vans) alongside McDormand and a stoic but why-the-fuck-is-he-in-this David Strathairn as a down-on-his-luck soon-to-be grandfather you automatically generate audience empathy towards the subject matter. Against or alongside seasoned performers like McDormand, however, the chasm of performance and screen-truth is wide and deep. Non-actors don’t fit into the film alongside McDormand or Strathairn, sounding and looking like just who they are instead of fictional approximations thereof. In my opinion Zhao ought to have either gone one way or the other: either cast every role with actors, or none of them. The juxtaposition between sequences with McDormand strolling the American Landscape looking all broken and half-drunk, and sequences where she’s conversing with real people who are living this lifestyle, is jarring, and pulled me out of the movie. 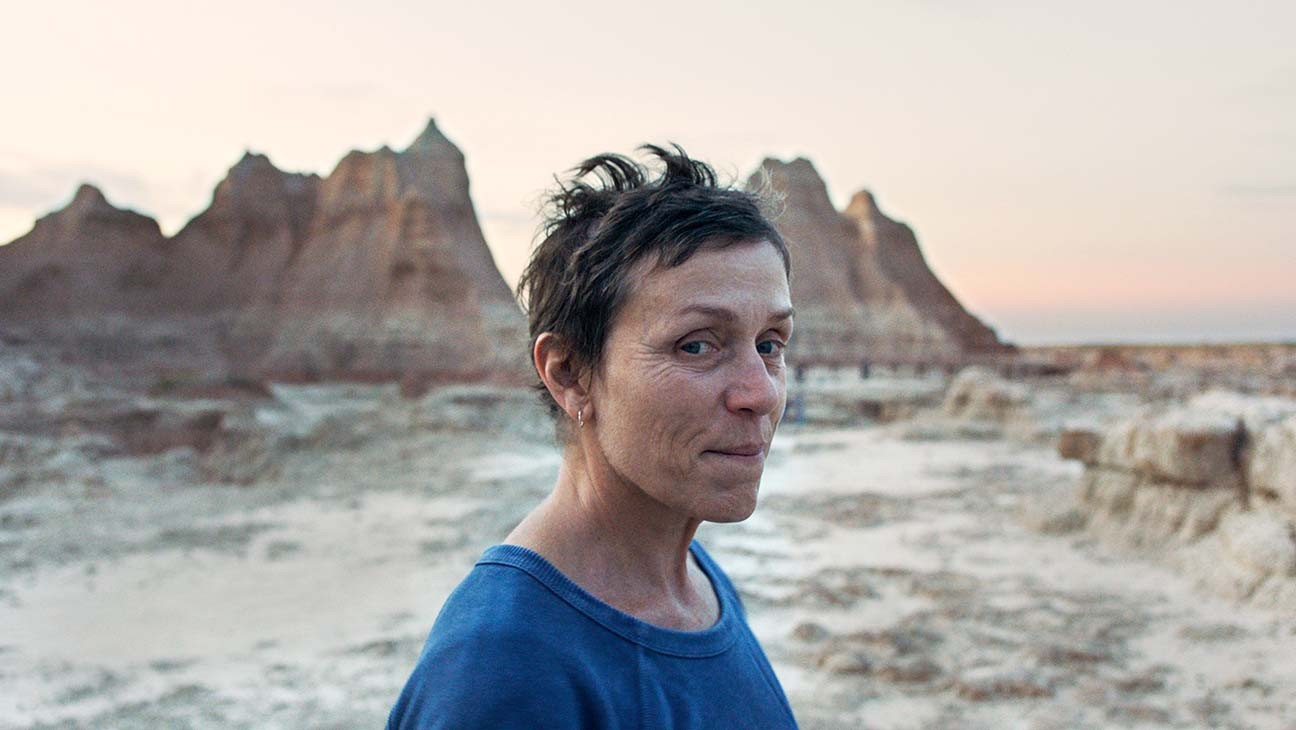 Nomadland is a disappointing movie all-round, really. Aside from watching McDormand act to trees, cliffs and the roaring ocean, there’s very little here that a half-decent Netflix documentary couldn’t capture in twice the time. Bless Chloe Zhao for keeping this movie to only a twitch over 90 minutes; any longer and I’d have wanted to claw out my eyes with the shattered dreams of McDormand’s Fern. Although the intentions here are honourable, the road to hell is paved with them, and I didn’t buy the fictionalising of a non-fiction premise with such artistic flair as being wholeheartedly genuine. The cynical part of me kinda wonders if the film was made specifically to appear at award shows; the cinematography, music and avant garde style entice interest from those to whom this speaks volumes, but for the remainder of us with a more worldly outlook there’s something almost demeaning about Nomadland’s nonchalance and wistfulness.