Off the back of his sci-fi classic take on American violence, RoboCop, Dutch director Paul Verhoeven next turned his attention to the big-screen adaptation of Philip K Dick’s short story “We Can Remember It For You Wholesale”, produced by Tri Star and produced by a name familiar to genre fans, Ronald Shusett (Ridley Scott’s Alien, John Guillermin’s King Kong). From a screenplay by Shusset associate Dan O’Bannon (Alien) and Gary Goldman (Big Trouble In Little China), as well as Shusset himself, Total Recall would star box-office superstar Arnold Schwarzenegger (Predator, Conan The Barbarian, The Terminator) alongside some of Hollywood’s big names (Sharon Stone would breakout a few years later in Basic Instinct) and some dynamite special visual effects. The film would become a huge success, grossing over $250m off the back of a reasonably restrained $50m budget, cementing Verhoeven as a legitimate industry heavyweight, helming yet another violent, crowd-pleasing satire on American culture and the science fiction genre itself, with Schwarzenegger continuing to prove himself an A-list box-office draw. So what of Total Recall’s status as a film since its release in 1990: does the film still hold up, or has it dated somewhat in the interim? 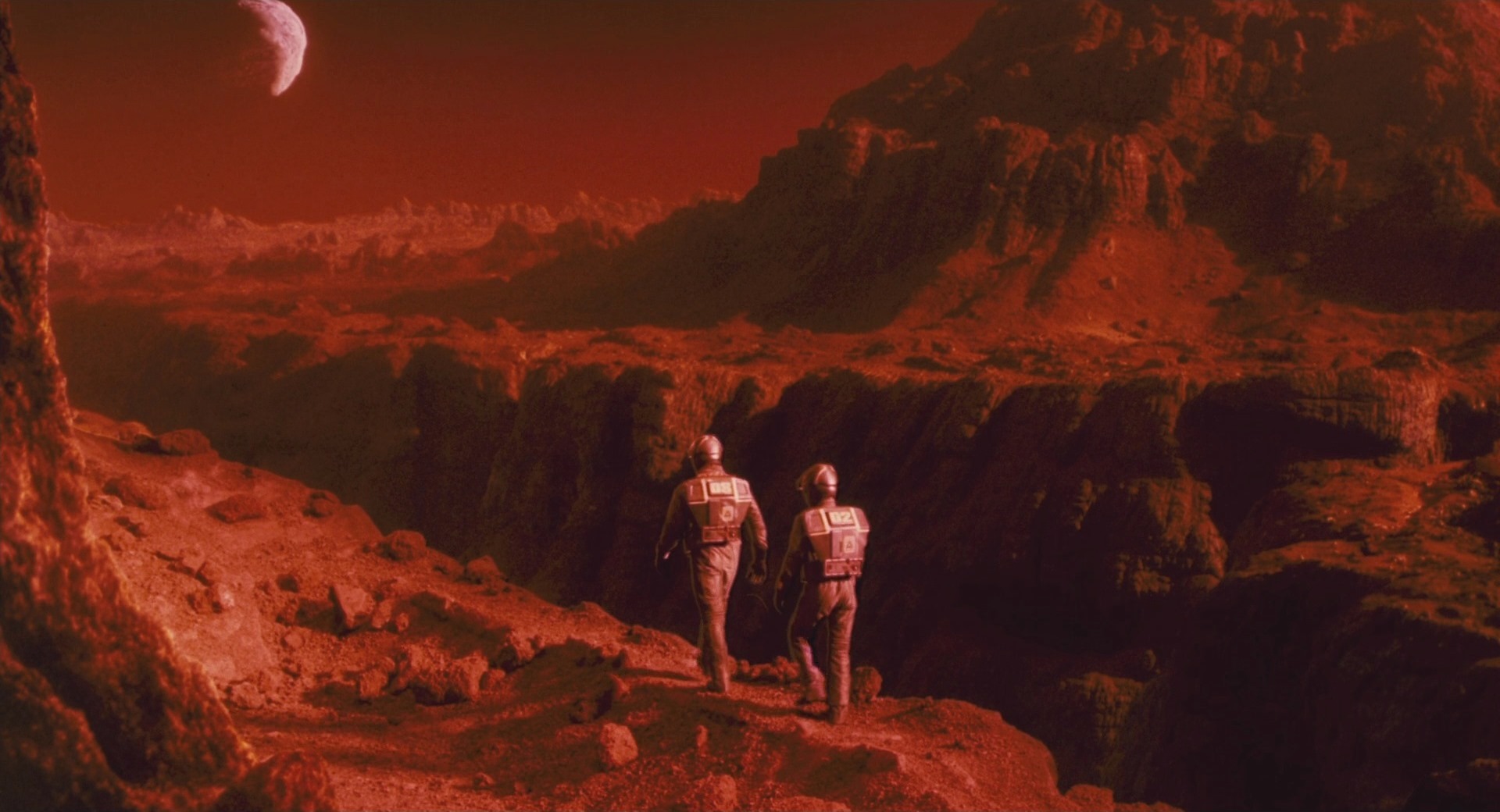 Douglas Quaid (Schwarzenegger) lives a meaningless life as construction worker on Earth in the future, with his athletic and doting wife Lori (Sharon Stone), with dreams of visiting the distant colony on Mars. Although Lori is resistant to the idea, Doug visits Rekall, a company that provides implanted memories of vacations; when the memory implant begins, things go horribly wrong, with Doug reacting badly to the operation and violently fleeing the scene, mysterious henchmen led by the sadistic Richter (Michael Ironside) in hot pursuit. Doug learns that he’s actually a secret agent named Carl Hauser, sent to Earth in hiding after assisting a rebellion on Mars against oppressive bureaucratic governor Vilos Cohaagen (Ronny Cox); Doug returns to Mars where he meets another resistance fighter, Melina (Rachel Ticotin), who aides him in his mission to unmask Cohaagen and the mysterious leader of the resistance, Kuato (Marshall Bell). 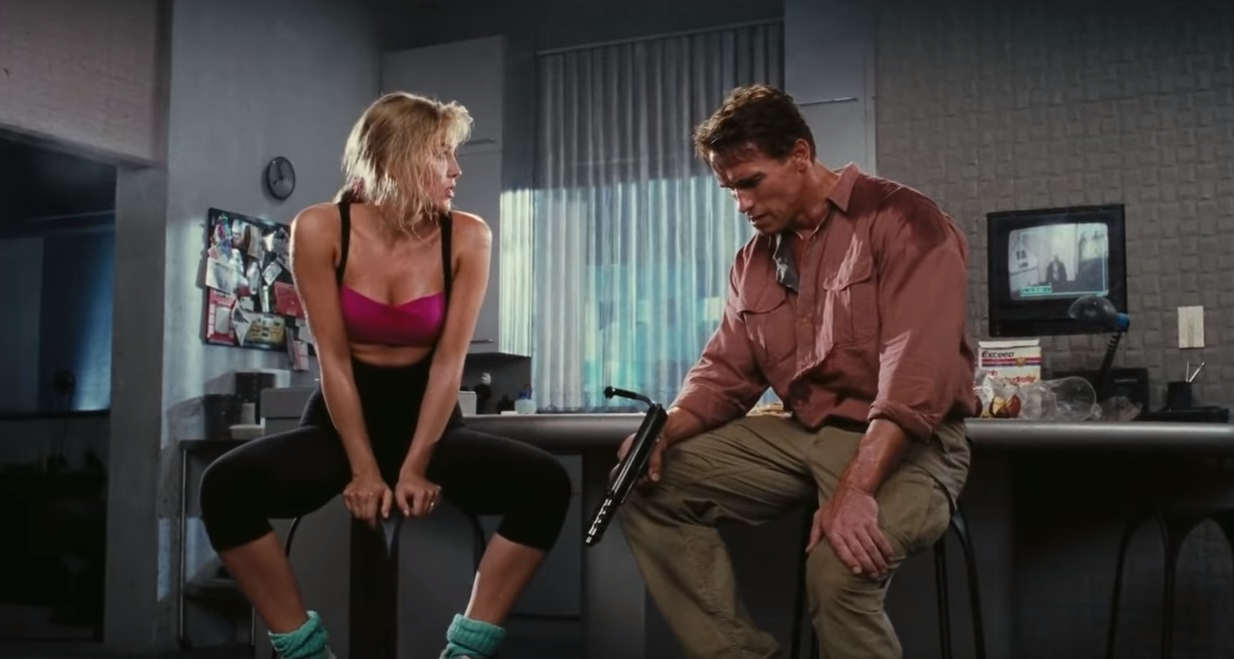 As indelible as its multitude of futuristic fantasmagorica have become, Total Recall’s dedication to practical visual effects and that muscular, testosterone-laden tone remains its most memorable trademark. Schwarzenegger was at the top of his game here, a larger-than-life screen hero (the film predated his most iconic on-screen moments in T2 by a full twelve months) whose sheer size filled the frame at almost every opportunity – and Verhoeven made the most of his opportunities. Similarly to the director’s earlier outing in RoboCop, this sci-fi opus tackled modern themes of corporatism and capitalism, opining the nature of memory with the concept of implanted falsity being more alluring than reality, and a smattering of futurism thrown in to boot. Admittedly some of the technology depicted in Total Recall seems anachronistic and laughable by today’s standards, but some of the ideas here – the enormous X-ray scanner at the airport, for example – are pretty much spot on. Total Recall also plays a little like a pulp 40’s noir thriller at times, at other times hammering the gritty, dystopian near-future we all hoped would never come to pass with its sharp plotting and simplistic dialogue, but thanks to Verhoeven’s astute eye for action and framing the film gains an energy unlike any other of the period. 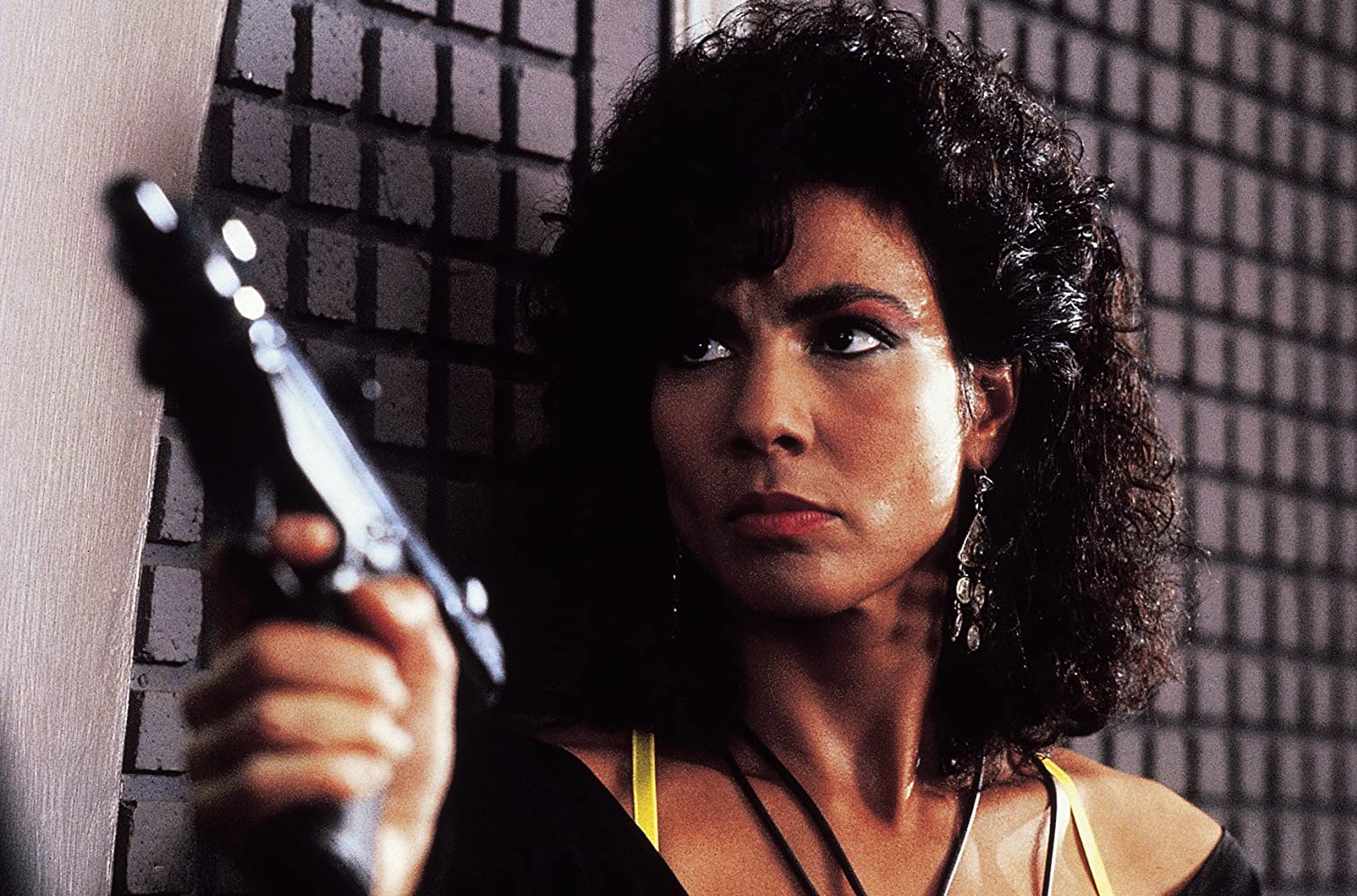 Indeed, Verhoeven’s trademark violence and gratuity make for salacious viewing; a young Sharon Stone sweats up a storm mixing it up with Arnie’s raw brawn, whilst Michael Ironside and Michael Champion form a formidable double-act of gangland stormtrooper and his right-hand-man henchman. There’s plenty of blood here, as bodies litter the trail of destruction wrought by Quaid as he moves from Earth to Mars to find Kuato, and while it might all feel a touch too much like an expensive B-movie, it’s all done so tongue-in-cheek, so effortlessly carte-blanche, you cannot help but be drawn into the utter silliness of it all. In 1990 the violence depicted may have felt gratuitous to the point of absurdity, but now it all feels really overplayed. That’s not a deficiency of the film, merely an observation on how things work in the three decades since its release. The inherent absurdity of the premise is played with a straight bat by all involved, although Verhoeven’s wry winks to the audience punctuate the brutalism of this future-aesthetic; the robotic cab driver, the three-breasted prostitute, the innumerably child-poor Benny (Mel Johnson Jr), the infamous tracker remover shoved up Arnie’s nostril – yes, delightfully raucous insanity of the future might not have come to pass yet but hell if it isn’t astutely crass and right into a teenage boys’ wheelhouse. Total Recall was initially rated R here in Australia – equivalent to an NC17 in the US – before being downgraded to an M (15 and under accompanied by an adult) with a censored version available to audiences. Thankfully, we’re now allowed to witness the full bloodthirsty gore and impactful violence of Verhoeven’s vision in its original cut. 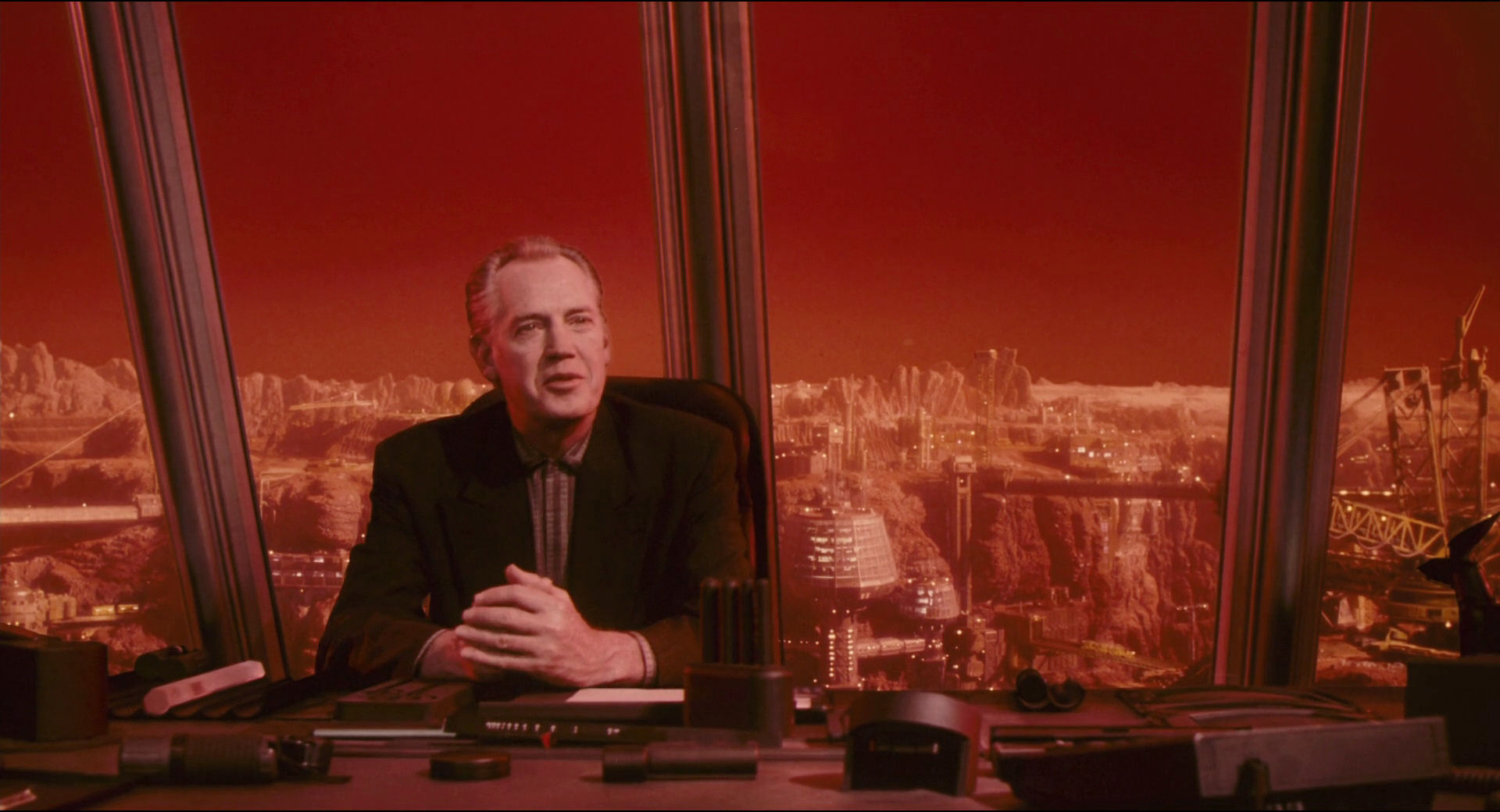 Also among the startling elements of Total Recall that will impress audiences today are its marvellous sets and tremendous use of matte paintings, mainly used to showcase the otherworldly vistas of the martian landscape. Rob Bottin’s incredible effects still hold up alongside the wonderful backdrops provided and Jerry Goldsmith’s pounding score appropriately represent the futuristic world on display; abetted by Jost Vacano’s gritty cinematography – the film was shot in the same open matte aspect as RoboCop, and features a similarly roughed-up visual style – Total Recall looks gorgeously pessimistic. 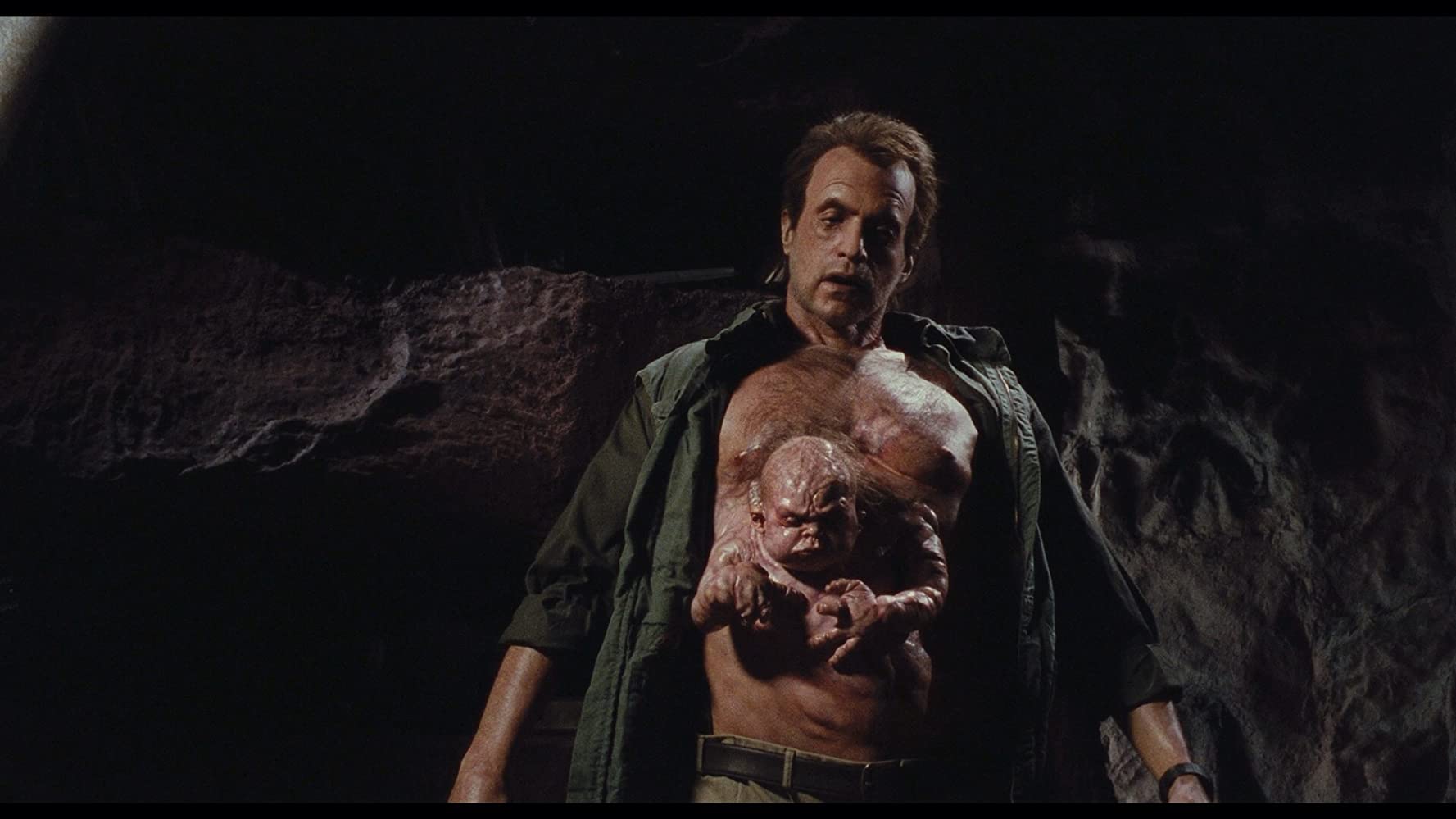 Gory, bloody and hedonistic, Total Recall is an exemplary B-movie dressed up with state-of-the-art visual effects (mostly practical, not digital!) that delivers rousing spectacle, some dynamic performances and wit, a solid Arnie turn and a thrilling escapist storyline that will have you guessing throughout. Is it a dream? Is it real? Even the ending is unclear: the ultimate hoodwink, perhaps? Give the remake a miss, this is the definitive version of Dick’s original premise.