It feels a bit weird reviewing a Broadway show on what is obviously a film website, but Hamilton, now streaming on Disney+, transcends the medium of “cinema” as a filmed stage-show. Lin-Manuel Miranda’s blockbusting Broadway musical has been a phenomenon, boasting sold out runs since its debut on stage in 2015, snagging the Best Musical Tony Award (2016) and entering into popular culture almost immediately as the Next Big Thing. The original 2016 cast were filmed across a series of performances and the result is an edited-for-television version of the show migrated superbly onto a global platform for everyone to access, not just those able to fork out a mortgage payment for tickets. Boasting sublime performances, incredible songs and a dynamism that encompasses the uniqueness of Miranda’s original concept – based on Ron Chernow’s biography of Alexander Hamilton – Hamilton comes to all our homes and will elicit excitement from anyone whose ever enjoyed musical theatre, and maybe even the few of you who don’t. 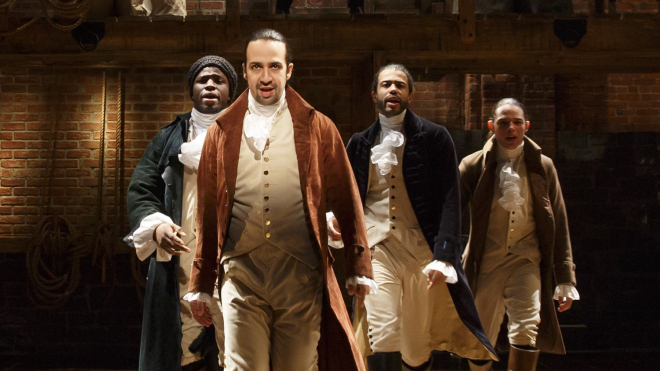 Hamilton sees Lin-Manuel Miranda (Mary Poppins Returns) play the titular character, Alexander Hamilton, one of America’s Founding Fathers and the first Secretary of The Treasury and a key architect of the country’s infant financial system. The show depicts key moments of his life, from his assistance to future President George Washington (Christopher Jackson) during the Revolutionary War against England – note the hilarious and all-too-brief appearance of Frozen’s Jonathan Groff as the Mad King George III – to his adversarial relationship with Thomas Jefferson (Daveed Diggs) and James Madison (Okieriete Onaedowan), to the brinkmanship with his eventual killer in Aaron Burr (Leslie Odom Jr), to his love-triangle personal life with two of the Schuyler Sisters, Angelica (Renee Elise Goldsberry) and wife Eliza (Phillipa Soo); all leading to the formation of the United States and his place within the nation’s history. 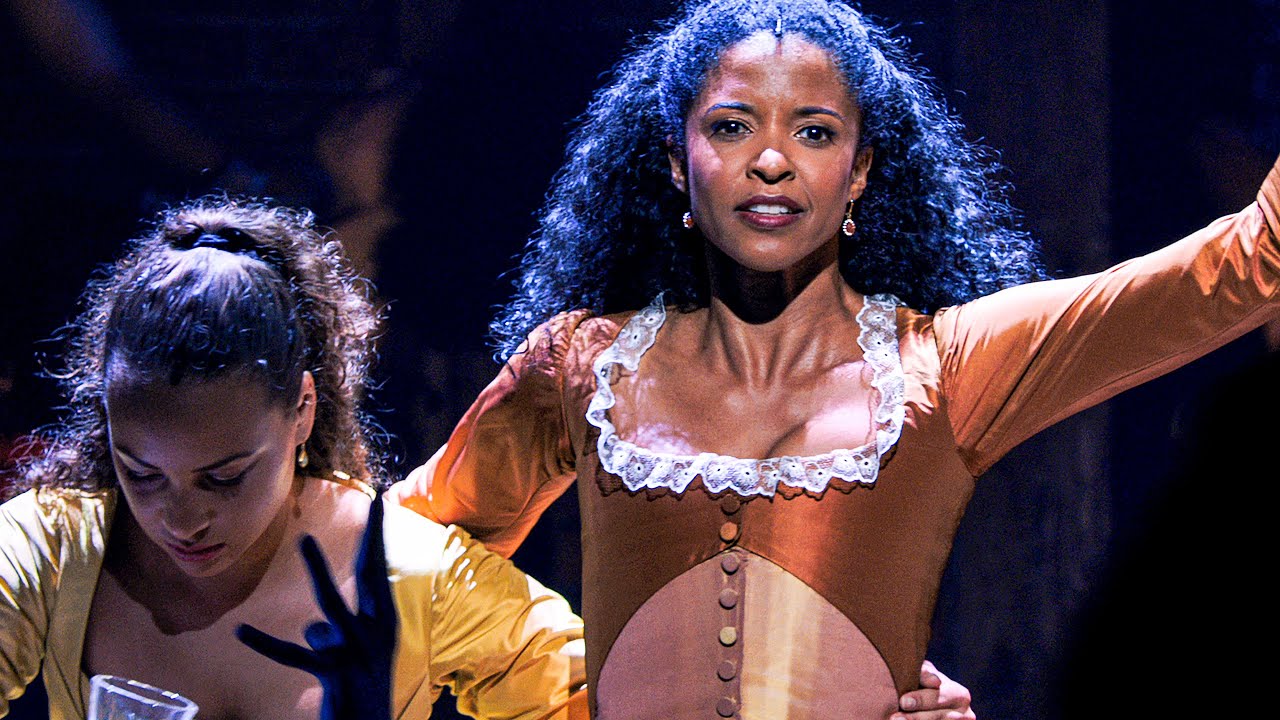 As a non-American viewer of Hamilton, there was a lot in this stage show I didn’t understand at first. I had to rewatch this just-shy-of-three-hours film with Wikipedia on standby to try and work out who was who, what was happening, and why all this angst was so manifested in the histrionic performances of the various actors. It’s a show absolutely packed with historical insight, whether accurate or played up to accentuate Alexander’s particular proclivities I’m unsure, but the amount of exposition Miranda asks us to wade through is, for somebody as deficient in early American history as I, voluminous indeed. If I’m honest I’d never even heard of the man before hearing of the original stage show back in the day, so my knowledge of Hamilton’s affect on the formation of the United States was always slight. Hamilton the stage show forced me to learn more – if that’s what it takes to bring people up to speed with education, I’m all for more of this kind of thing. So anyone approaching Hamilton as an “easy watch” will be in for a massive surprise, because the dialogue is so engorged with references to the man’s life, his failings and successes as a man and political ally, it’s perhaps worthy of a thesis all on its own. 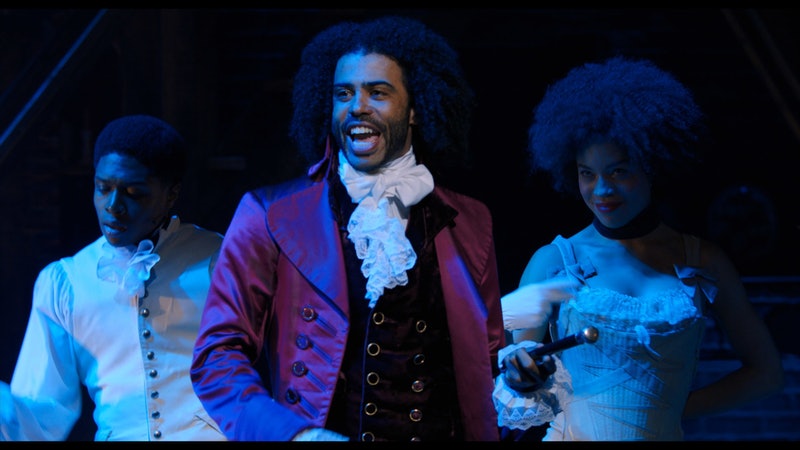 One of the bravest creative choices Hamilton makes is casting African-American and other ethnic performers in roles where you’d traditionally cast white people. Historical figures like George Washington and Aaron Burr, if you Google them, were as white as the screen upon which you read these words, so it takes some getting used to to see them portrayed by people of colour. Where the show absolutely hits a home run is whenever there’s a mention of slavery or racism; having these themes tackled by people for whom those issues are all-too-real even today is withering in its prescience. Lin-Manuel Miranda, a native of New York City, brings a passion and electricity to the titular role, a role notable for humanising one of the nation’s great early influencers when it might be all too easy to simply regurgitate the good and eschew the bad: in the show, Hamilton has an affair with a woman not his wife (played by Jasmine Cephas Jones) and suffers great personal indignity because of this, with the story turning on its heel to showcase the laudable resilience of his wife Eliza to “Rise Up” and claim her own sense of humanity despite Alexander’s failings. 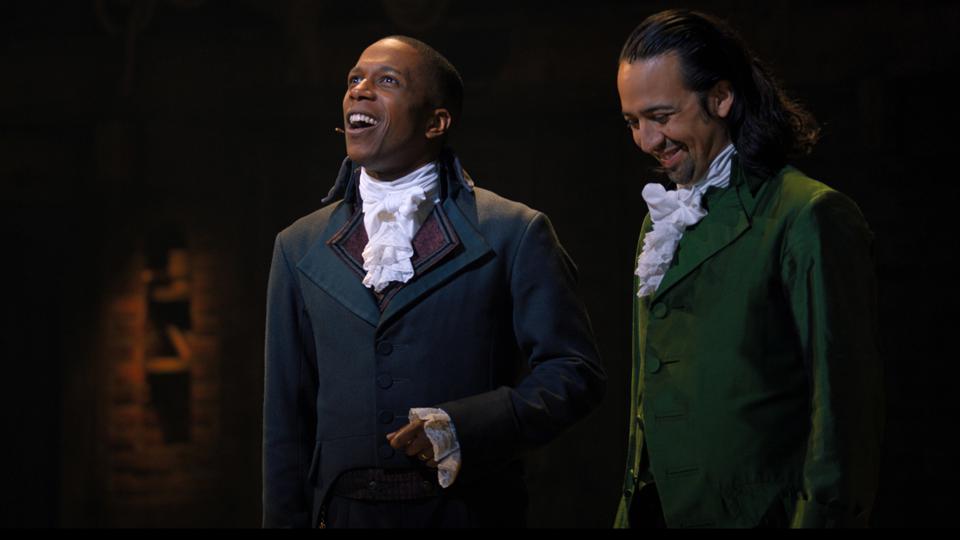 Playing the show’s “villain” with energetic sympathy is Leslie Odom Jr, as future Vice President Aaron Burr (Burr would stand underneath Thomas Jefferson’s Presidency), the man who would kill Alexander in a fit of pique and crucially ruin his reputation for the rest of his life. Burr is an empathetic villain in that he never manages to escape the shadow of Hamilton through no fault of his own, consigned to life in infamy whilst Hamilton, something of a martyr, would become legitimised as an American Success Story. Odom Jr has the withering rage inside him to capture the frustration of Burr’s continued failures, and his performance of one of the show’s most memorable songs, “The Room Where It Happened”, is one of stratospheric magnificence. Playing Alexander’s forlorn wife, Phillipa Soo captures innocence and inner strength with an acuity absent many of her contemporaries. She’s also a terrific singer, belting out “Burn” – in which she has discovered her husband’s extramarital affair and burns his love letters to her – and truly mesmerising the viewer. The likes of Christopher Jackson, as Washington, and Renee Elise Goldsberry, as the elder Schuyler sister Angelica (her rendition of “Satisfied”, an ode to her own love of Alexander whilst he courts the younger Eliza, is breathtaking) is one of Broadway’s great love tragedies. Taking the cake for the most memorable turn is Daveed Diggs, who plays the recalcitrant Thomas Jefferson with such swagger and a veneer of charm and wit you can’t help but chortle every time he delivers a line, and I felt he was the show’s absolute scene-stealer; maybe only thwarted in this by Jonathan Groff’s sublimely insane King George – the real King George suffered from mental illness in his later years, approximated by Groff’s continued spittle-driven performances here, which are absolutely hilarious, as are the songs he sings: “You’ll Be Back” and “What Comes Next” are instant classics.

Indeed, Hamilton would be nought without its songs, and this is a production with an abundance of legitimate showstoppers. The eponymous “My Shot”, in which Alexander decries giving up his chance to help create a new nation, references the man’s eventual demise in his ill-fated duel with Burr – something I didn’t understand until I Wiki’d what the hell was going on – provides a constant theme throughout the show, reprised almost constantly in the gargantuan ensemble numbers, whilst the trilling brilliance of “Helpless”, the moment Eliza falls for Hamilton and is the most romantic song of the whole thing, encapsulates the brilliance of Miranda’s song-writing ability to jump from genre to genre. There’s a lot of rapping and spoken-word poetics here, the verbal avalanche requiring some attention via subtitles to capture the linguistic wit and brilliance on display. The stage show’s production design isn’t particularly awe-inspiring with grandiose sets or surprise elements – the set remains the same throughout, a series of multi-levelled catwalks and staircases surrounding a stage with a movable center section – but it matters not: the actors and songs command the attention throughout and you’re drawn into their plight and personalities with a pounding soundtrack, wry comedic moments and some dynamic lighting design. As a filmed stage performance, the camerawork is apropos quite distant from the actors with only a few exceptions, where the producers have obviously filmed on the stage to allow several moments of actual theatricality to slide away, but the editing to splice together multiple performances and angles to feel so cohesive is exceptional. 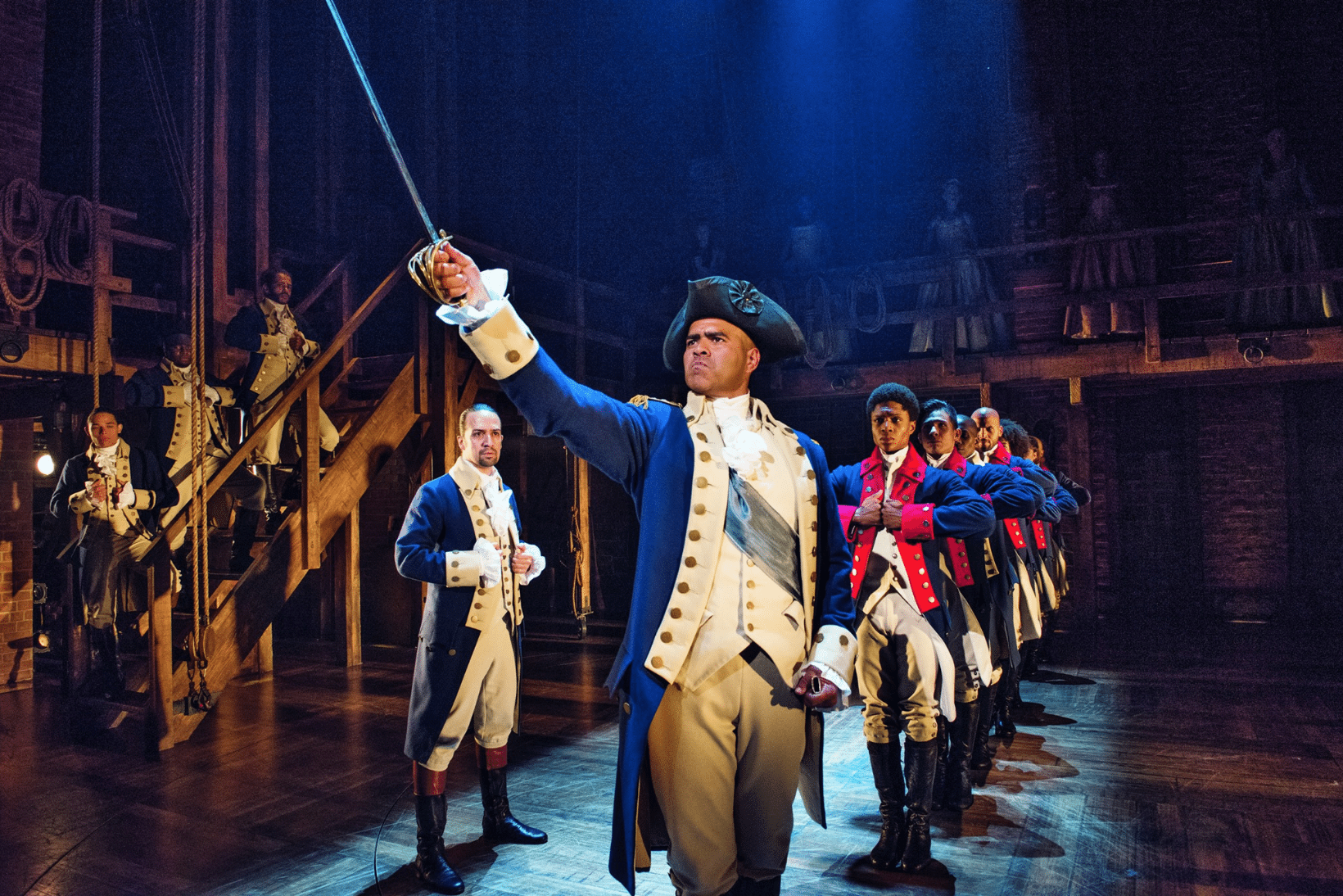 Look, it would be remiss of me not to mention the single biggest complaint I had with the whole thing, which arguably isn’t a big deal in any way that it makes a jot of difference, but I did find Lin-Manuel’s voice itself a touch too weak for my liking. Every time Miranda sang I half expected his throat to collapse from the effort; he’s got a very thin sound here, almost straining to compete alongside the stronger ranges of his fellow cast-mates, and although making such comparisons is a relative cheap shot in the grand scheme it’s worth noting that the man who gave us this production is, himself, one of the things I found wanting in my critique. But the man sure can write some songs, and Hamilton has easily the best musical soundtrack I’ve heard since Moulin Rouge. 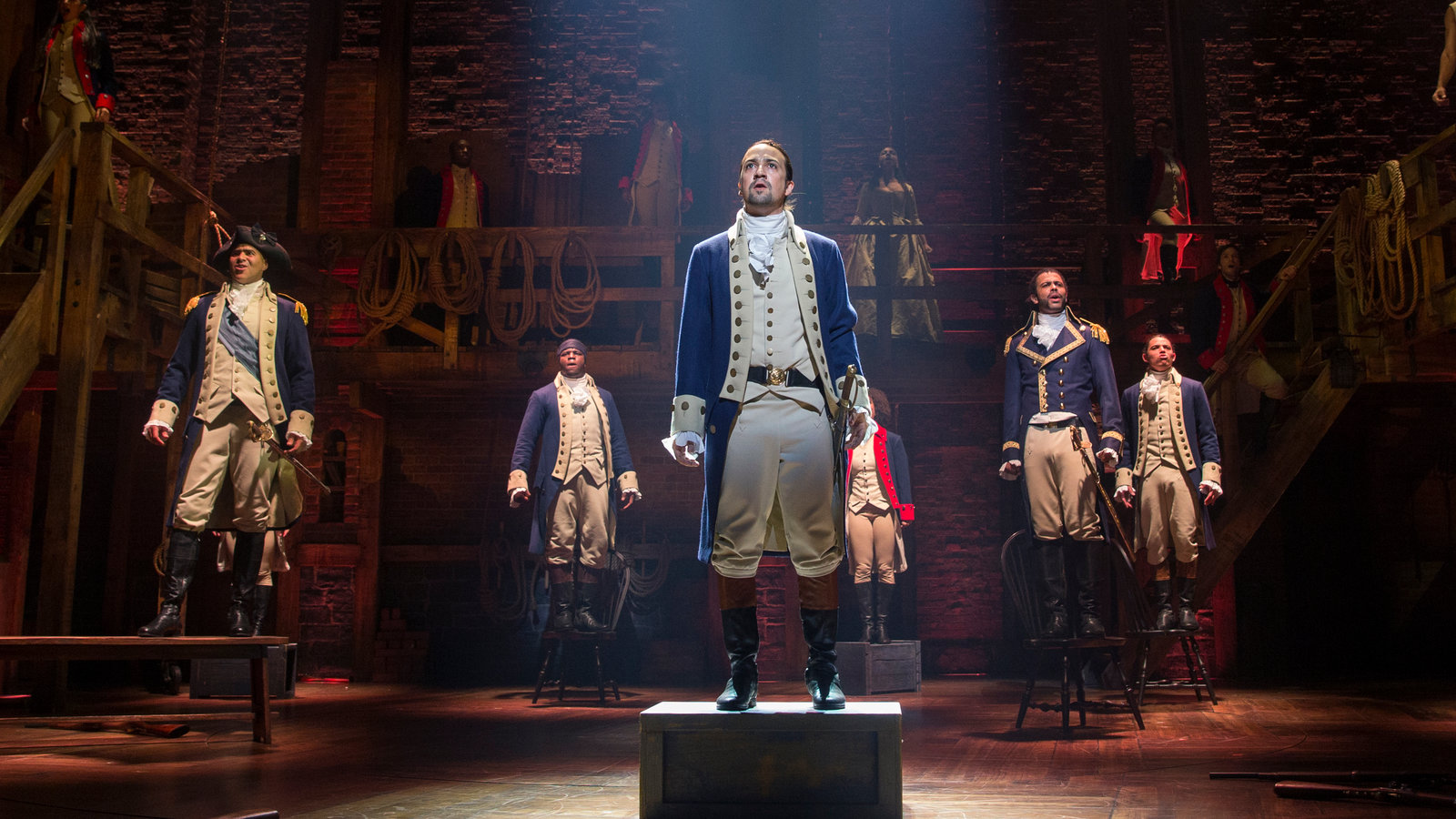 Hamilton is an absolute classic, a masterwork of musical exposition, historical entertainment (although it’s worth noting the show avoids, changes or simply rewrites some of the real history of these actual figures from America’s birth, not that it cares given how powerfully it pursues its agenda to entertain) and I defy anyone watching it not to be downloading the soundtrack almost immediately afterwards. I’ve long resisted the lure of Broadway shows filmed onto the screen simply because of my prejudice for actual cinema, but this is a creative treat not to be missed. Powerful performances and indelible songs make for a powderkeg of emotional resonance and, if you take away anything from Hamilton at all, it’s that the people who formed the American nation as we know it would look upon the 2016-2020 rabble with horror and dismay. Hamilton is one of those rare visual treats that is simply unmissable.