The late 90’s saw the gradual decline of the box-office appeal of Hollywood icon Arnold Schwarzenegger; following Eraser in 1996, the star fumbled with Christmas comedy (Jingle All The Way) and the most reviled of all the Batman film, Batman + Robin, before trying hard-edged supernatural drama in End Of Days (1999) and both this, The 6th Day in the new millennium, and Collateral Damage, in 2002. His return to the Terminator franchise in 2003’s Terminator: Rise Of The Machines, was a success but by then Arnie’s career was definitely heading downward. Returning to watch The 6th Day after nearly 20 years (!) came with a pang of nostalgia, representing the halcyon days of my local cineplex which had opened barely three years earlier, and was turning out the glut of Hollywood content as quickly as possible. I was one of those who enjoyed Eraser and hadn’t minded End Of Days (mainly because Robin Tunney got her boobs out), and with director Roger Spottiswoode coming off the back of one of Brosnan’s better James Bond films, Tomorrow Never Dies, I figured I couldn’t go wrong with this combination. 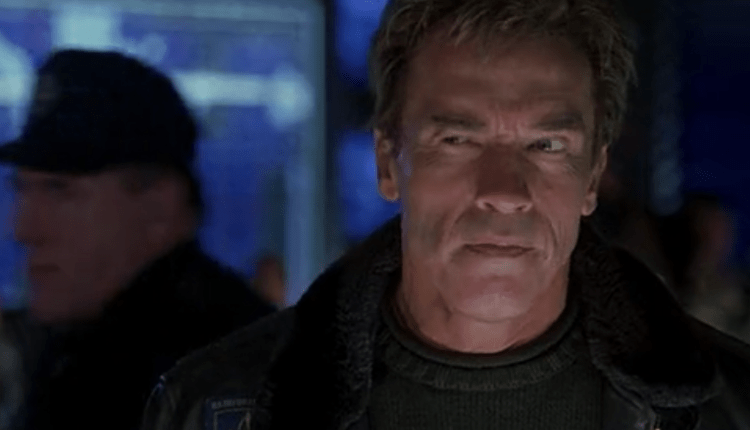 In the near future, we learn that cling technology has reached the point where we can successfully replicate animals and other, non-sentient, body parts to aide in health and medicine, however the cloning of humans has been banned following a terrible (but otherwise mysterious) incident sometime in the past. Adan Gibson (Arnie) is a happy family man, married to Natalie (Wendy Crewson – The Santa Clause) with a young daughter, Clara (Taylor Anne Reid), while operating a successful adventure tourism charter service with partner Hank Morgan (Michael Rapaport – The Heat). One evening he returns home to find his doppelganger already present, but before he can react he is pursued by a quartet of violent henchmen led by Robert Marshall (Michael Rooker – Guardians Of the Galaxy). Marshall’s lieutenants, Talia (Sarah Wynter), Vincent (Terry Crews in his film debut) and Wiley (Rodney Rowland) attempt to capture Gibson, returning him to the offices of Replacement Technologies, a cloning laboratory that has, against the law, been cloning humans. The organisation is controlled by CEO Michael Drucker (Tony Goldwyn), who together with scientist Dr Griffin Weir (Robert Duvall – To Kill A Mockingbird), have concocted a brilliant black-market operation through which they can funnel millions of dollars. The arrival of Gibson, in direct contravention of the laws against human cloning, make him a threat to that plan, meaning he must be taken care of.

Let’s be clear: The 6th Day owes a lot to Paul Verhoeven’s Total Recall. Oh it’s not a direct rip-off, but while the outer casing might have a different paint job, the chassis beneath is near identical. Arnie plays the laconic Adam Gibson, whose life is thrown into chaos accidentally through technology of the day – in Total Recall, it was having memories implanted, whereas here it’s having oneself cloned, albeit by accident – and must outwit not only a savvy businessman in the form of Tony Goldwyn’s slimy Drucker (represented the equally slimy Ronny Cox from Total Recall) but the various grabbag of henchmen sent to stop him; Michael Rooker takes the Michael Ironside role, while the likes of Sarah Wynter (in the Sharon Stone role), Rodney Rowland and Terry Crews all pursue him through the dingy landscape of…. whatever city it is. There’s plot twists, technological advancement (a luscious hologram – portrayed by Jennifer Gareis – used by Michael Rapaport’s character is kinda reminiscent of the latent sexuality Verhoeven put into his own films) and a global threat to thwart, all aping Verhoeven’s thematically potent style under the dread shroud of a PG-13 rating.

And it’s the rating that undermines a lot of The 6th Day’s sense of showmanship. In a film with this rating, you only get one chance to say “fuck” and the film absolutely makes the best possible use of it (after all, when there’s clones involved, why wouldn’t you consider fucking oneself?) before it tries to one-up itself shortly afterwards with one of the worst line deliveries in the movie reprising the very same notion. The films cartoon violence is neutered by the fact that nobody in this film can truly die – after all, you can just be cloned, meaning you’re practically immortal so long as your “simcording”, a total computer backup of your memories, is implanted into your clone template. There’s neck-snapping and various bodily violence visited upon the henchmen sent to capture Gibson, all jokes working on psychosomatic memories of previous injuries hindering the newly “born” clones repurposed to their task, but it’s largely bloodless and sanitised. This makes it perfect for a more accommodating audience demographic but hell if it doesn’t make the continued gunfire, fight sequences and copious action beats a little less potent, and a lot more anaemic. 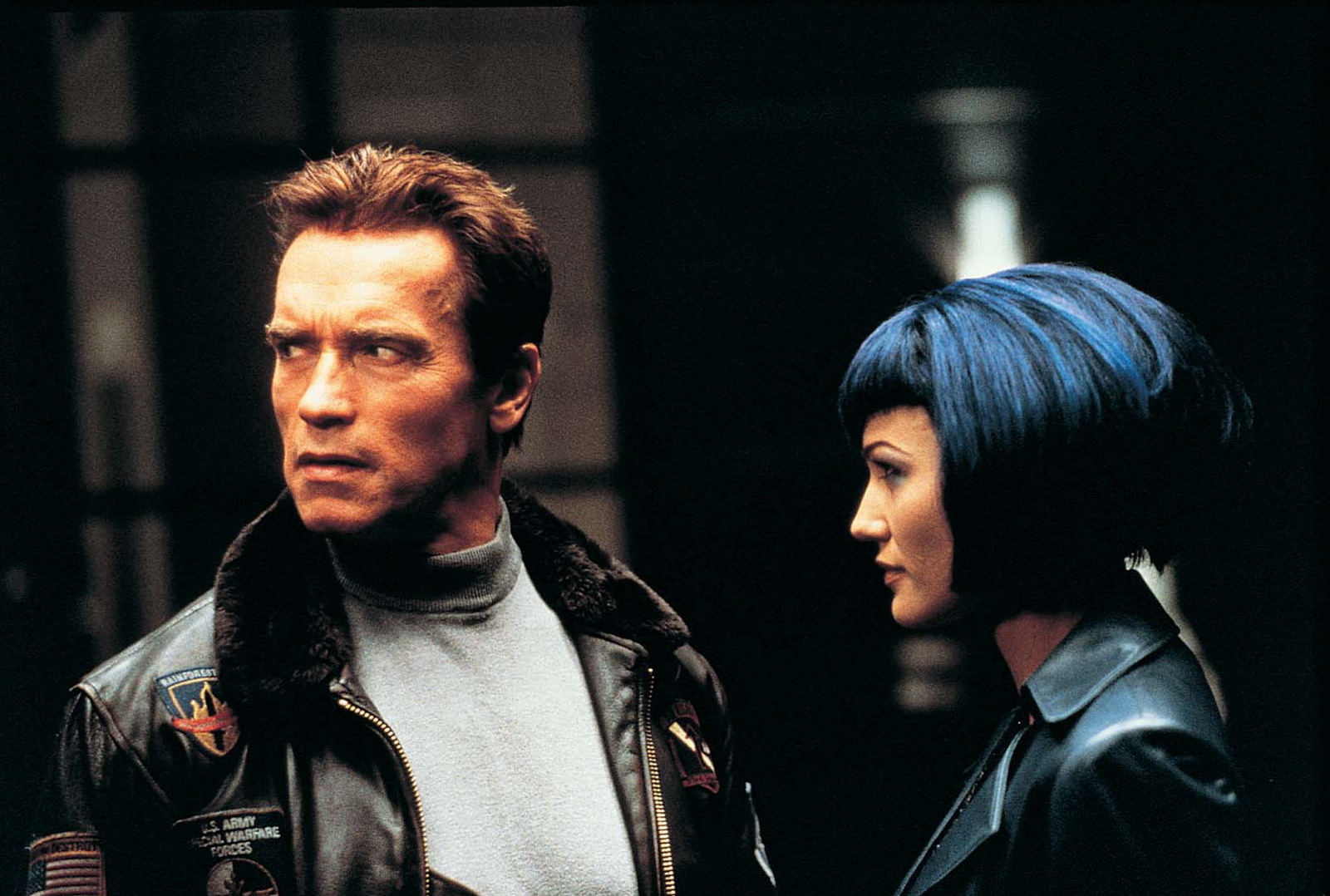 To his credit, Spottiswoode really does try to elevate the pulpy material, showcasing Arnie at his cheesy, sci-fi best with all the spectacle and green-screen background replacement he can. His command of action sequences is tight, if slight, the film’s editing on-task without hindering our understanding of the sequence, and there’s enough gee-whizz humour and rancorous sentimentality to sink a battleship. Sadly, the cinematography is really rather drab, all greys and neutral tones, the homely setting of Adam Gibson’s family nest contrasting with the science-fiction aesthetic of the Replacement Technologies resembling a nightmarish Apple store complete with enormous cloning tanks ripped right out of Star Wars. Pierre Mignot’s photography is smothered in monochromatic blandness, at least in the print I saw, lacking a real pop or sense of cinema and coming across as largely low-budget. The film isn’t low budget, of course, having some quite spiffy visual effects thrown in, although the less said about a robotic doll used as a sim-replacement for the Gibson’s dog the better. The clone replication effects late in the movie are cool, and the sequences where Arnie must play opposite himself are surprisingly good even two decades later.

Although the draw of Arnold Schwazenegger might have waned by the time The 6th Day arrived in cinemas, there’s still something silly about watching the man himself chew the scenery with such a straight face. It’s all played so seriously, it’s funny. Even with its slick, futuristic plot and halfway decent ensemble of on-screen talent, The 6th Day remains a flat, problematic Arnie vehicle with little memorable achievement. The ideas thrown at the audience are intriguing, but the execution is lacklustre, a grab-bag of tropes and sci-fi cliches subverting a potentially interesting take on the ethics of human cloning, something sci-fi has postulated for years. Putting aside my own personal nostalgia for the era in which it was made, The 6th Day is a mild, brainless action yarn that’s eminently skippable if something else is on, but utterly charming in a cheesy, low-grade Verhoeven type way.