The early 1960’s were a blockbusting time for newfangled children’s sci-fi series Doctor Who, which broadcast its first episode on November 23rd, 1963, and practically became an overnight sensation. The first four episodes consisted of the Doctor, his granddaughter Susan, and companions Ian and Barbara travelling back to visit prehistoric man in the Doctor’s time machine, the TARDIS, before the fifth instalment threw them far into the future and onto a different planet, Skaro, the home of the mechanoid monsters known as the Daleks. The arrival of the Daleks and their monotone, harsh robotic voices scared the bejeebers out of kids across England, cemented Doctor Who as a bona fide hit, and for a brief few years “Dalekmania” swept the nation. Capitalising on the popularity of the Doctor’s arch foes, a trilogy of feature films based on their television serial adventures was planned by production company Amicus, the first of which, Doctor Who & The Daleks, was based off Terry Nation’s 1964 television serial of the same name. That film was quite the success, no doubt propelling production of a quickfire sequel, based on Doctor Who’s second Dalek adventure, “The Daleks Invasion Of Earth,” which screened in the last two months of 1964. The sequel, the cumbersomely titled Daleks’ Invasion Earth 2150 AD, feels a little more opulent than its big-screen forebear, although by today’s standards remains quite the trite, wooden, clunky affair. 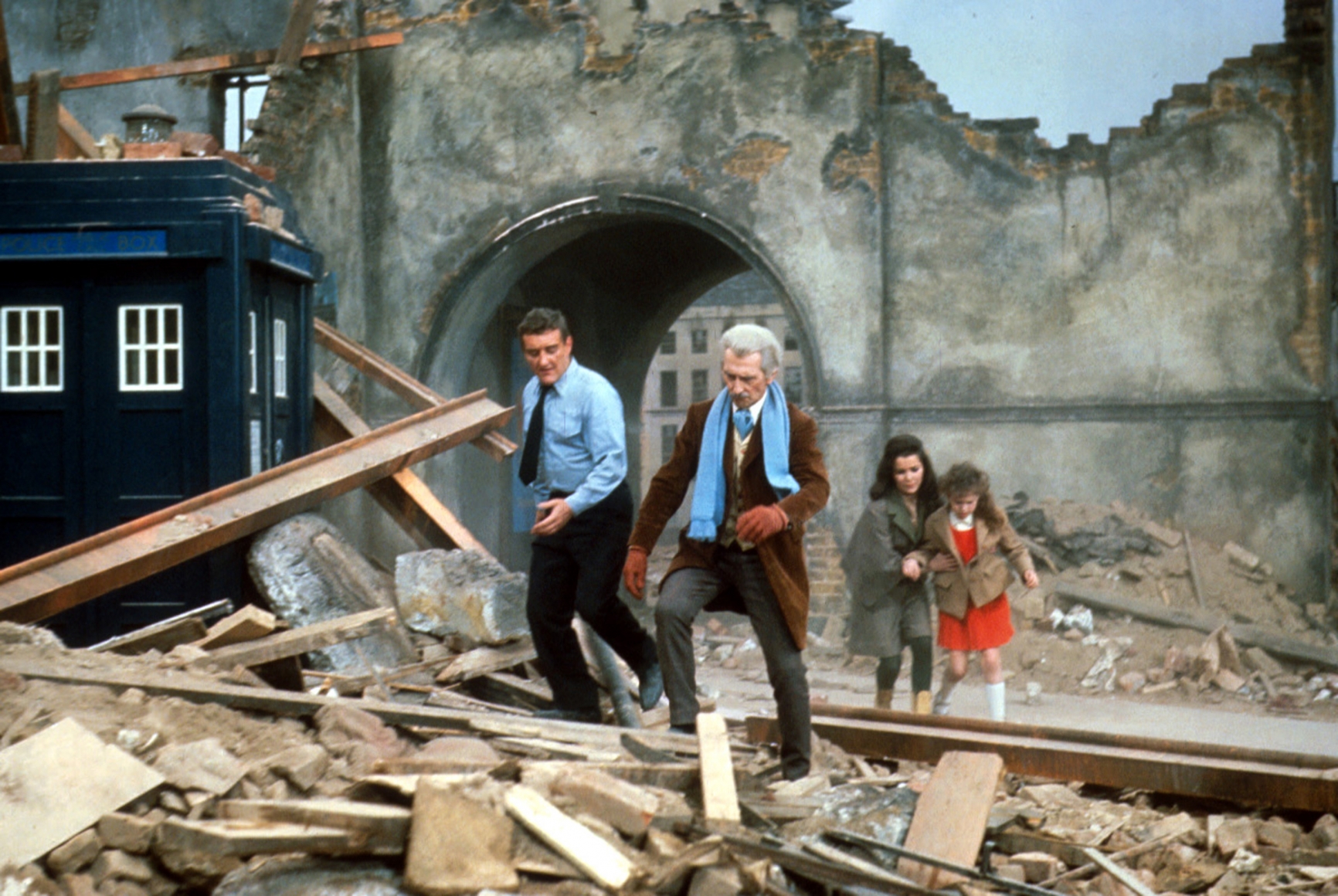 Cushing returns as the eponymous title character, referring to himself as “Doctor Who” rather than simply “the Doctor”, whilst Bernard Cribbins appears as a bewildered London policeman, Tom Campbell, whisked away in the Doctor’s time machine to a far distant future. Alongside Cushing and Cribbins, returning franchise player Roberta Tovey reprises her role as the Doctor’s granddaughter Susan, whilst Jill Curzon appears as Louise, whose relationship to the other TARDIS occupants is a complete mystery. The TARDIS lands in an apocalyptic London, where a rag-tag group of Brits live in the shadows, constantly in fear of the Daleks and their humanoid cohort, the Robomen. The Daleks have begun to mine into the Earth in Bedfordshire in order to convert the Earth into a giant moving base from which the Daleks can conquer the galaxy, by destroying the planet’s core and disrupting its magnetic field. Together with rebel Wyler (Andrew Keir) and David (Ray Brooks), the Doctor and his companions must overcome not only the might of the Robomen and the Daleks, but also evil humans working to further the invaders’ plans.

The second Dalek feature film is a threadbare adventure yarn delivering minor excitement and juvenile scripting, Gordon Flemyng directing again from a screenplay by producer Milton Subotsky, derived from the original television serial by Dalek creator Terry Nation. Although utilising elements of the Doctor Who television show, notably the Doctor, the TARDIS and the Daleks themselves, there’s no sense of continuity between this film and the small-screen version, or even any genuine links between this film and its predecessor. Audiences might have been left mystified by the absence of original TARDIS companions Barbara and Ian (played by Roy Castle and Jennie Linden in the previous film), instead finding them replaced by some woman named Louise for no apparent reason, and Bernard Cribbins’ bumbling police officer only really goes so far to maintain interest. Fans of the show will recognise Cribbins for his appearance in the rebooted Doctor Who series during David Tennant’s tenure as the 11th Doctor, which makes revisiting this film both amusing and disappointing for its silliness.

And it is entirely silly. Gone is the original serials’ sense of creeping menace and unrelenting dread, replaced by technicolor reproductions and a cartoonish tone that belies the nature of what great science fiction could be. The brightly lit Daleks are still quite menacing with their computerised voices and sinister, faceless evil, so that helps, but not enough to counter the uneven pacing and often dreadful exposition through the various bit-players who populate the story. It could have been a remarkable film had it been better directed: the script could have worked in the hands of a director better attuned to what makes the Daleks truly frightening which isn’t often isn’t sheer weight of numbers or superior firepower but rather their implacable natures and an inhuman, unfeeling emotional constant. The style of the film makes them feel like badly behaved Teletubbies, with flat production design and John Wilcox’s oversaturated cinematography removing the mystery and atmosphere the television show captured so perfectly. Also: exactly why the filmmakers decided to give the Daleks smoke weapons instead of laser beams like the TV show, but it was a poor decision.

Standing tall in this mess is Peter Cushing, who makes a remarkably effective Doctor despite all that’s involved to trip him up. Had he been cast in the television show I have no doubt he’d have made a fantastic and memorable version of the character, so to see him saddled with such hopeful enthusiasm bound by indifferent, cheap filmmaking is truly disappointing. The big-screen Doctor Who isn’t an alien, but rather a human professor of sorts who invents a time machine and sets about on adventures, which also removes a lot of the mystery surrounding the central character. But hey, the Doctor isn’t the central character, really; that falls to the titular Daleks, who dominate the screen with as much front-and-centre work as possible to satiate the rabid desires of children around the country desperate to soak up as much of their “ex-ter-min-ate” as possible. I guess if you’re seeing a film with Daleks in the title, Daleks’ Invasion Earth 2150 AD delivers what you asked for. The film follows the basic plot points of the Terry Nation’s original serial closely, removes a lot of the in-continuity stuff (in the show, Susan falls in love with David and is kicked out of the TARDIS at the end of the serial – that doesn’t happen here mainly because Roberta Tovey is a juvenile) and offers bigger effects for explosions and spaceships and Daleks overall; fans of the show will know what’s coming, neutral audiences won’t which makes even less sense because you would have had to be a fan to go along and understand what was happening in the first place. 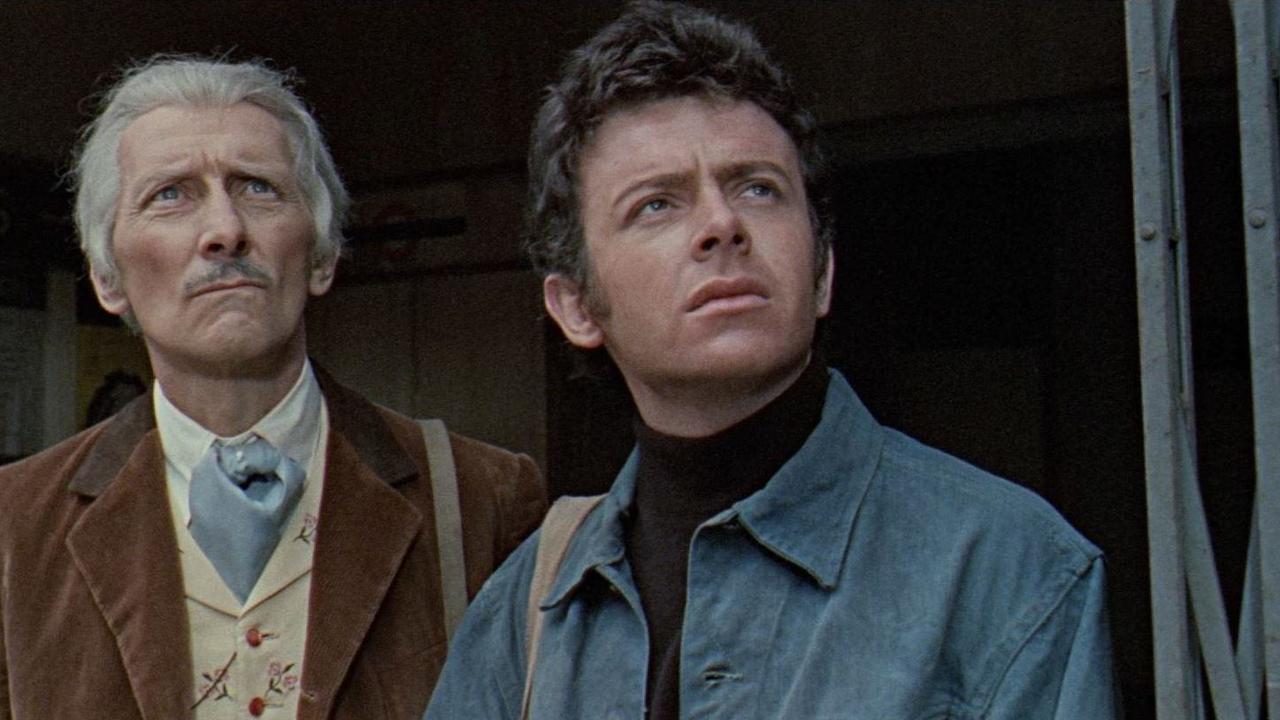 Bizarrely, the film makes no use of the television show’s central theme, more’s the pity, and eschews the show’s then-pioneering use of electronic music for a jazzy, upbeat and totally incongruous backing score that, whilst undoubtedly of-the-period for the mid-1960’s, jars badly today. The matte painting backdrops used throughout the film are actually pretty decent in and of themselves, but the technology used to integrate them into the finished film has dated quite poorly too, unfortunately. Equally annoying, in full high definition you can quite easily see the seams of the film’s production whereas decades of VHS and DVD-quality reproduction hid them from view. The action sequences range from borderline inane to legitimately exciting – an early moment where a van goes careening through the city, a farm, and eventually a forest, is well mounted – but the overall tension in the story and characters never elevate beyond a murmur. 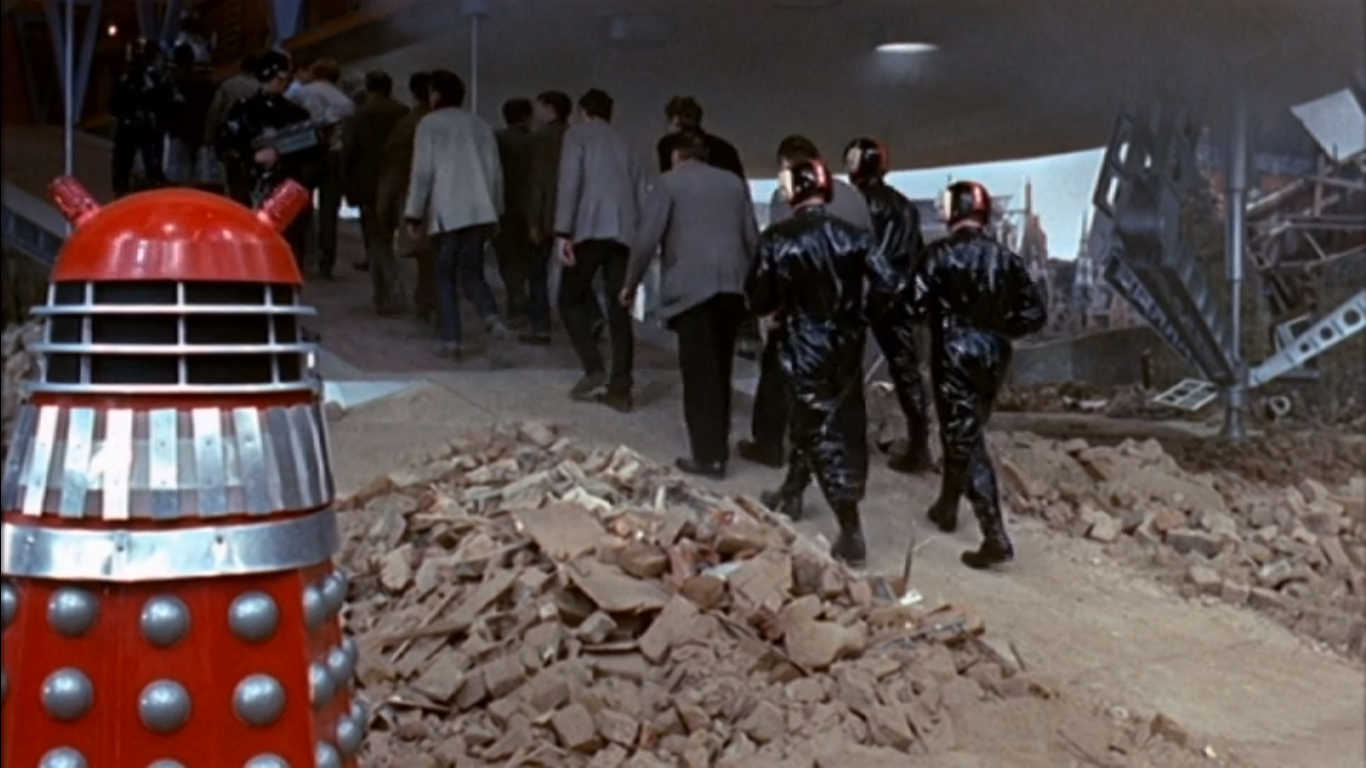 Depressing: you’d expect a big-screen film starring one of the genre’s most identifiable and memorable pop-culture bad guys to have more going for it. Sadly, the film looks cheap (the TARDIS interior is basically a couple of cupboards, some black curtain, and an assembly of basic 60’s lights and levers, a far cry from the far more creative television version) and Cushing aside it is cheap. The humour is limp, the action uneven, and the acting passable if often too rigid and staged, and the trade-off for seeing the Daleks in blazing colour (for the time) must not have been worth it, for the film sank like a stone on debut, resulting in the planned third film, based on the show’s second season storyline entitled “The Chase”, being scrapped. Little wonder: non-discerning children who watch the television show will either hate this film or be confused by it, and adults who can separate the film from the show will still find themselves bored by its relentless elementary aspects.