As we settle in for an era in which an orange reality television “star” sits in the Oval Office, and the American political spectrum wages war upon itself, it’s perhaps the most pertinent reminder of all America stands for that Frank Capra’s iconic film, Mr Smith Goes To Washington, should be mandatory viewing for those who seek to install their own brand of corruption within the world’s least popular superpower. There’s so much to unpack within this film, particularly as it pertains to today’s terrifying poolitical climate, that writing a review of the film threatens to swerve into commentary on real-world events that are well beyond the purview of Capra’s film; it’s testament to the power of this briskly told, lengthy diatribe against the corrupt elite within Washington that the film remains as on-point now (maybe even moreseo) than it did in Capra’s idealised 1930’s Americana. 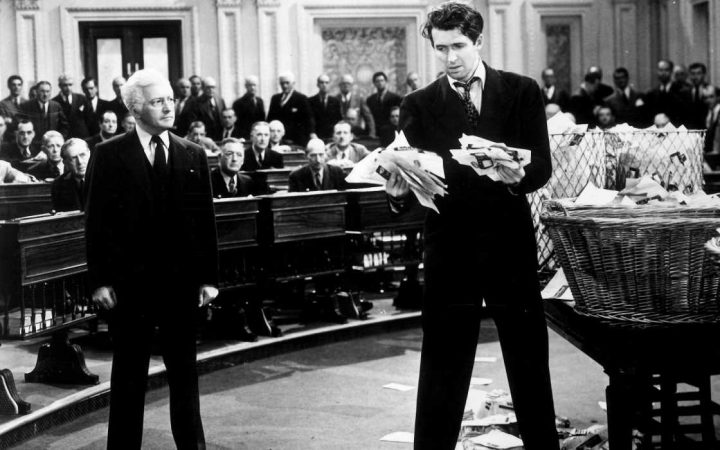 When the US Senator Sam Foley passes suddenly, the state’s Governor, Hubert Hopper (Guy Kibbee) must choose a new member to sit in Washington as their representative. Hopper’s powerful, corrupt boss, media mogul Jim Taylor (Edward Arnold), wants him to pick a candidate that can work as a stooge, for Taylor, together with equally corrupt Senator Joseph Paine (Claude Rains) have plans on a dam in their local area to be used to further their financial gain. They choose the leader of a local boys group, Jefferson Smith (James Stewart), who travels to Washington with the ringing of Abraham Lincoln’s idealised America in his eyes and ears. Wet behind the ears, Smith soon finds out the reality of Washington’s political estates, as he’s pilloried as a yokel and castigated by those he looks up to. However, when he learns that the esteemed Senator Paine and Jim Taylor are in corrupt cahoots, he, along with his secretary Clarissa Sanders (Jean Arthur) takes matters into his own hands, standing in the most powerful room on Earth and castigating those he sees as damaging the American Dream.

While it might not feel like a plus-2-hour film, Capra’s Mr Smith Goes To Washington covers a hell of a lot of ground quite quickly. The film flits between story points like a dervish upon opening – an opening, I might add, which is at pains to point out that the following film is fictional, and the people within it are also fictional, only to recap that same sentiment at the every end – as it wrestles through death, political corruption and American idealism within the first five minutes. Capra’s film, based on Lewis Foster’s Academy Award-winning story, sets up its protagonists and antagonists easily and with a dash of mawkish sentimentality; the whole film pivots on the patriotic fervour of American exceptionalism overriding entrenched corruption, and while today that might seem particularly twee, the film swings so wide it can’t help but feel authentic. 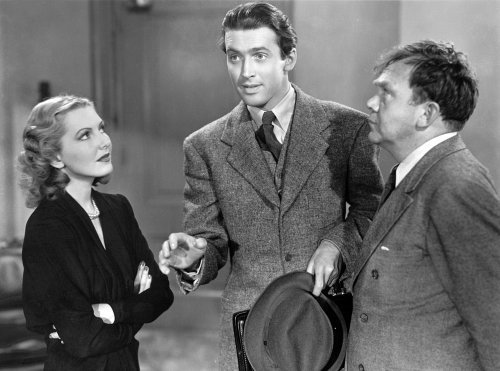 Capra’s leading man is the film’s chief success: Jimmy Stewart was still a relative newcomer to Hollywood when he made this film, although he’d appeared in a dozen or so films previously, and his subsequent nomination for an Oscar as Jefferson Smith saw him catapulted into the A-list. Stewart’s wide-eyed enthusiastic portrayal of Smith is excellent, a perfect mix of youth, overly trusting love of country and of course, fervent belief in the Constitution of The United States, which he holds almost a biblical-level love for. Stewart’s arc upon discovering his idols, his fellow senators, are all a bunch of corrupt political hacks furthering their own gain, is well played later in the film, and while you’d almost expect him to fly into a rage and denounce democracy based on capitalist zealotry, the fact he doesn’t (and fights with the Constitution as his weapon of choice) endears him to almost any audience watching today. Stewart’s lengthy filibuster sequence, where he holds the floor of the US Senate (and refuses to yield to anyone) is a magnificent sequence of the Little Man fighting a system that’s become encrusted with the barnacles of indifference and selfishness, and remains Capra’s most deafeningly on-point piece of artistry.

The supporting cast are all excellent as well; Claude Rains, providing solid conflicted humanity to his unscrupulous Senator Paine, is alternately likeable and detestable, ruinous to Smith’s ambition to form a camp for boys with the intent of turning them into men, while Edward Arnold’s Jim Taylor, as close an approximation of Rupert Murdoch as this film can achieve, is odiously slimy and, arguably, humanly hideous. Both Rains and Arnold provide the crux of Smith’s dilemma, and his eventual bullish demolition of the American political system, and Capra’s refusal to give them any empathetic underpinning reeks of bias. But it is biased: the film itself courted controversy nationwide upon release, with threats to ban it utterly as it was deemed unsuitable for the public to witness such a depiction of the Senate as a corrupt and incapable orgy of buffoonery. The film would go on to snag an Oscar nomination in both Best Picture and Director category (losing to that year’s juggernaut, Gone With The Wind) thus validating Hollywood’s courageousness in dealing with a story of nationalistic pride. 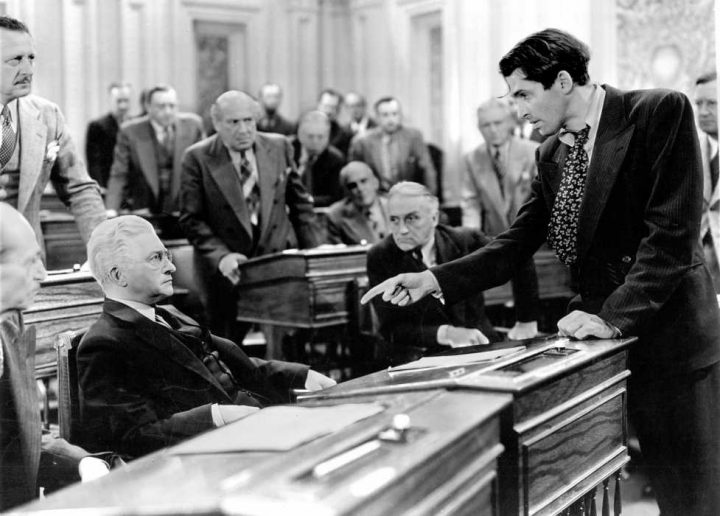 The film’s romantic element is also fairly strong. Co-star Jean Arthur’s sassy secretary Clarissa Sanders is the idealistic female identity – strong willed, never willing to be saddled with sexual frustration in a man’s world, and blatantly over the whole Washington lifestyle. Her rapport with Stewart’s Smith is handled well, and her soft-focused moments of introspective romance never feel clumsy or trite. Instead, she plays an active part in Smith’s filibuster of the Senate, laying even more on the line than the main character himself. Sanders is excellent. Quick-eyed viewers will note the voice of Disney’s Pinocchio, Dick Jones, as a Senate pageboy (they actually have pageboys, wouldn’t you know it!) and a minor cameo to screen femme-fatale Astrid Allwyn, as Senator Payne’s flytrap daughter, Susan.

The film is chock full of speechifying of the kind that makes you glad to be American – even if you’re not American, you almost want to believe in the version of it espoused by Jefferson Smith. Is it simplistic? Sure. Is it a touch nationalistic? Indeed. But consider the alternative: America is living in that alternative with a piece of orange smegma for President, and at times like this we need more Jefferson Smiths now than we ever have. Although the film does wallow in Smith’s naivete a touch too much for my liking, it never goes the Homer Simpson route in making him a complete dolt – Capra captures the raw nerve of political narcissism and amps it into the audiences faces; it makes the Senate look like a bunch of blithering idiots (well, aren’t they?), I guess this makes for polarising populist viewing, and anyone who hates politicians will find this film both cathartic and frustrating.

Mr Smith Goes To Washington speaks loudly to those who seek to subvert all that makes America great – the score is a roll-call of popular anthemic marches from American history – and within the moments of humour is intertwined a black, almost venomous hatred for those dickheads who sit on Capitol Hill and play God with the people of that great nation. Whether Capra’s political leanings on the matter are valid or not, there’s no denying his film speaks volumes for the freedom, liberty and integrity of the highest offices in the land, and those who would usurp it. It’s so good, really, that it should be mandatory viewing for those currently in those positions: Mr Smith Goes To Washington is utterly magnificent viewing, and is deserving of its status as a cinema classic.