Principal Cast : Scott Menville, Tara Strong, Khary Payton, Hynden Walch, Greg Cipes, Kevin Michael Richardson, Robert Morse, Grey Griffin, Rhys Darby, Sean Maher, “Weird Al” Yankovic.
Synopsis: The comedic modern-day quintet takes on their 2003 counterparts when villains from each of their worlds join forces to pit the two Titan teams against each other. They’ll need to set aside their differences and work together to combat Trigon, Hexagon, Santa Claus and time itself in order to save the universe.

If you’re one of the few who skipped or missed last year’s Teen Titans Go! To The Movies, then this animated venture from DC, which pits the current animated Teen Titans against their lower rating 2003 variations in a smackdown for the ages, will probably be lost on your radar as well. The original animated Teen Titans cartoon ran for five seasons between 2003 and 2006, when it was cancelled, and showcased the adventures of a group of DC Comics’ second-string heroes Robin, Starfire, Raven, Beast Boy and Cyborg, with a recurring role for Terra. A decade after that series’ debut, America’s Cartoon Network debuted a revamped version of the series, giving it a more comedic tone and entirely different animation style (although retaining the same voice talent), and named it Teen Titans Go!; the series has enjoyed a successful run of self-aware meta-comedy and endlessly amusing gags, and even spawned its first big-screen feature, the aforementioned To The Movies, in 2018. 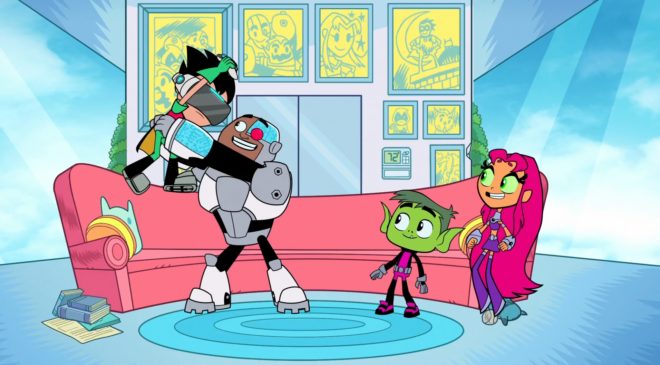 After foiling the dastardly Gentleman Ghost (“Weird Al” Yankovic), the Teen Titans return to their lair unaware of the toll the fight has taken on their angriest member, Raven (Tara Strong). The battle cracked Raven’s forehead crystal, unwittingly releasing part of her inner demon, something recurring villain Trigon (Kevin Michael Richardson) takes a keen interest in. When the Titans are abducted by the nefarious Master Of Games (Rhys Darby) and forced to fight against alternative versions of themselves, Robin (Scott Menville), Starfire (Hynden Walch), Beast Boy (Greg Cipes) and Cyborg (Khary Payton) must use all their wit, guile and gags to defeat Trigon’s multi-verse incarnation from destroying the entire universe. Also, Santa Claus appears in this film for some reason. 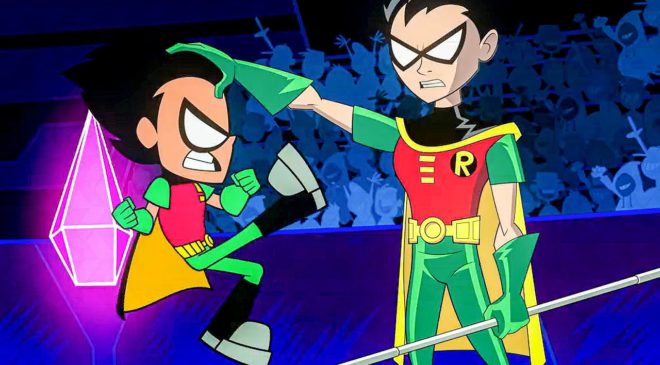 As with this entire franchise, having even a baseline knowledge of comic book history and/or DC Comics lore will hold you in good stead for the absolute bonkers batshit nuts craziness that awaits you inside Teen Titans Go! Vs Teen Titans, a film that plays deftly with time, space and Santa and comes up with a triumphant, winning formula. Cut from the same cloth as its feature film brethren, this film’s joke-per-minute ratio is off the damn charts and, for the most part, lands each one with an absolute knockout punch. Scripted by Marly Halperm-Graser and Jeremy Adams, the film doesn’t just bend time and space but snaps them entirely, introducing the concept of the DC Multiverse and playing it for the laughs it gets, whilst once more tackling issues of self worth, family, usefulness and gags. As an experience in sight and sound, Teen Titans Go! Vs Teen Titans is a laugh-a-minute adventure that never once lets up, from broad satire to subtle irony and a smattering of great fart-poop-snot jokes that will appeal to the smallest members of the audience. 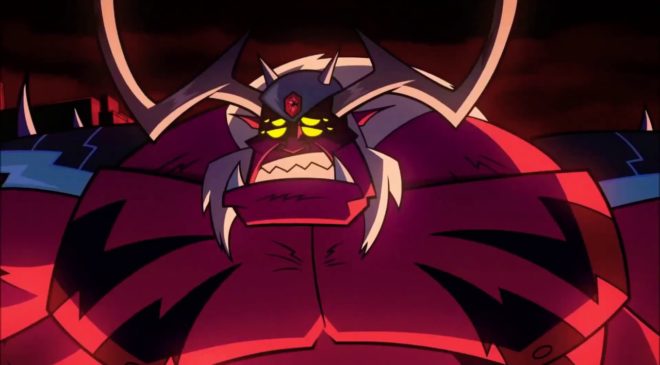 It’s hard to describe the film’s plot in more than a few sentences, but if you’ve ever wanted to see every single possible version of the Teen Titans team up (yes, this includes printed versions as well) then this is the film for you. It’s all played broadly and often for the cheap seats, although it doesn’t feel cheap – the animation style is initially a bit off-putting with that made-for-television look, but part of the charm is the manner in which the filmmakers – namely director Jeff Mednikow – inserts the styles of previous Teen Titan aesthetics and plays with them within the series’ in-continuity madness. And Teen Titans Go! Vs Teen Titans is absolutely mad, bonkers to the point of making me wheeze-cry with laughter, as the avalanche of non-stop jokes, gags and sight-references make for gasping, rewind-and-watch-it-again astonishment. For a long-time DC fan like myself, picking all the in-jokes and continuity references was a genuine delight. 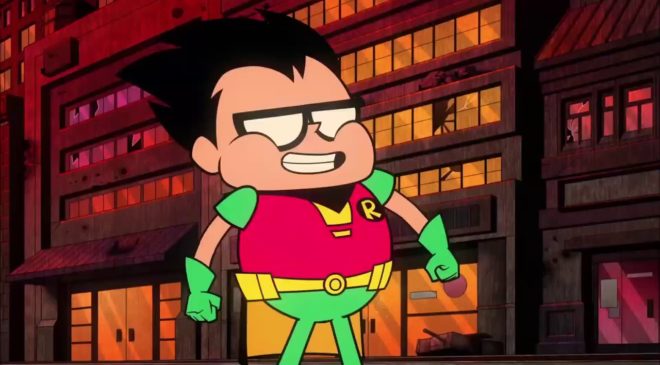 As always, the voice cast in these films is pitch perfect. Scott Menville’s work on Robin, portrayed largely as a self-aggrandising Batman wannabe, is hilarious, as is Khary Payton’s jive-talkin’ Cyborg, while Hynden Walch’s Starfire reminded me entirely of Tara Strong’s own work in Drawn Together as Princess Clara, while Strong’s work here, as Raven, is downbeat and attuned to a specificity of character the series has done well to achieve. Catching cameo work by Rhys Darby (as the Master Of Games) and Robert Morse (as a hilariously hysterical Santa) are gleeful notes in a sugary confection of musical symphonics, the film’s insane pacing and resoundingly cartoonish style mimicking all manner of genres outside of animation with huge degrees of success. I know Warner Bros still make Looney Toons shorts (although they aren’t currently available down here in Australia) but these Teen Titans Go! toons are drawn from very similar DNA. 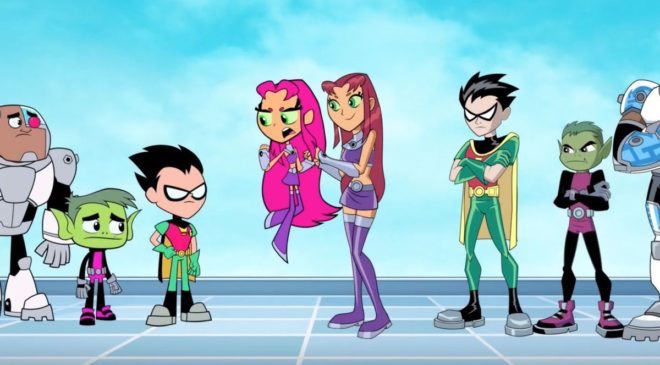 Teen Titans Go! Vs Teen Titans is the kind of film you can’t watch if you’re susceptible to seizures; the animation is frantic and blisteringly rapid-fire, a kind of acid-trip inspired lunacy that works well for kids with short attention spans and adult cognisant of having one at all. It’s hilariously written, superbly animated, amazingly self-aware and entirely self-referential, and in every way a superior piece of animated fun. Perhaps not quite as pop-culture savvy as To The Movies was, this Teen Titans Go! adventure dives deeper into DC lore than any previous and delivers an outstandingly bravura storytelling effort that mangles continuity as readily and easily as it subverts expectations. Sit down, buckle up, and enjoy.