If you can’t make a decent fist of the DCEU, at least make a terrific animated film sticking the boot into yourself. The Teen Titans have long been a DC staple of second-string heroes from the comic book world, consisting (in this iteration) of Robin, Beast Boy, Starfire, Cyborg and Raven, who fight crime as a junior team-up similar to the more prestigious Justice League. However, unlike Superman, Batman and Wonder Woman, the Titans don’t have their own movie – until now. DC have unleashed quite possibly the funniest film to tackle the superhero pantheon at their disposal in many a long year, a delightfully sarcastic jab at the studios successes and its many recent failures, delivering a seriously fun time for casual viewers and a goldmine of in-jokes and references for hardcore DC comic  fans. 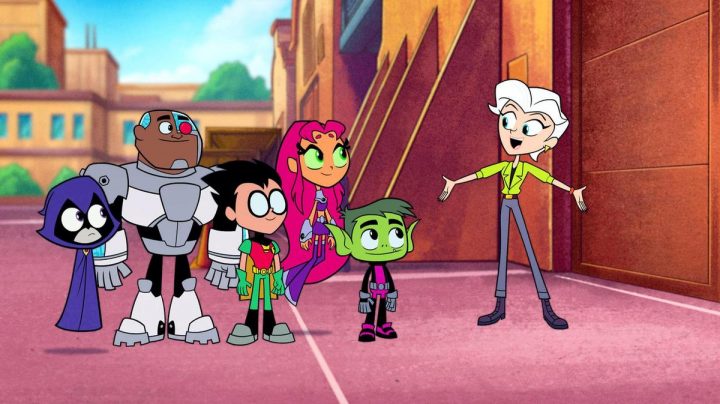 Following a disastrous battle with Balloon Man (Greg Davies) in their hometown of Jump City, the Teen Titans are belittled by the Justice League for not taking superheroism seriously – they aren’t legit because they do not have a movie. Robin (Scott Menville) desperately wants to be considered a superhero, dragging his Titan team – Cyborg (Khary Payton), Starfire (Hynden Walch), Raven (Tara Strong) and Beast Boy (Greg Cipes) to the Warner Bros studio lot in order to plead with superhero film director Jade Wilson (Kirsten Bell – Frozen) to make a film about them. However, the director informs them that they need an “arch nemesis”, a villain to fight to make them legit enough to have a film of their own. They focus on criminal assassin Slade (Will Arnett), who has his own dastardly plans for the fledgling superhero team: through adversity, the five heroic friends will learn what it means to be true heroes, as they attempt to make the world see them as more than just a joke.

Based on the 2013 WB animated series Teen Titans Go!, this solid 2018 feature film incorporates much of the series’ inherent zaniness with an underlying sense of humour that will land both with kids (there’s fart jokes, y’all) and adults (the closing line before the end credits will have parents guffawing wildly) alike, a smash-n-grab jokefest that feels light on its feet while managing to poke fun at the inherent idiocy of the medium itself. Filled with meta-references, packed to the gills with gags both visual and aural, Teen Titans Go! To The Movies is a really fun time at the movies, written with such love for the franchise and the extended universe players it’s almost impossible to get everything with a single viewing. 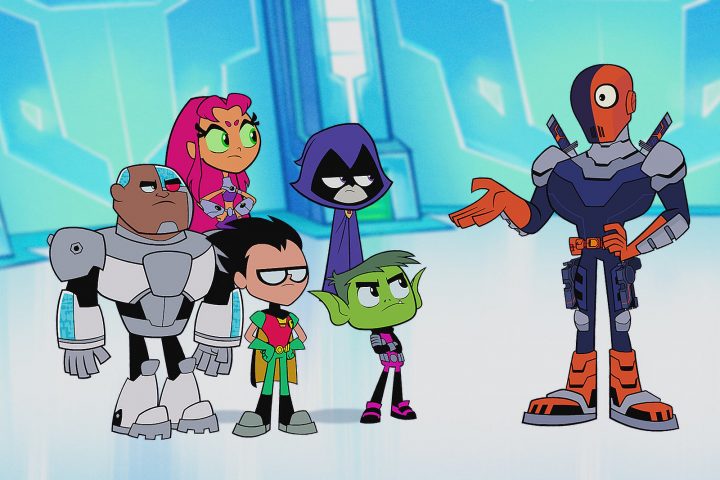 The voice cameos alone are worth the entrance fee – notably Marvel impresario Stan Lee, as himself, and the one-time almost-there Superman, Nicolas Cage, voicing an animated version of the character he almost played for Tim Burton. The dialogue is so fast paced you’ll miss a lot through laughing out loud at key moments, the sparkling sarcasm and spifflicating pacing is just rat-a-tat fast and never once slowing down for you to play catch up. Written by original series producers Aaron Horvath (who also co-directs) and Michael Jelenic, their understanding of these characters and their off-the-wall style is entrenched in the very fibre of the film’s DNA, and the sheer zany fun they have with this expanded canvas on which to deliver their fun and laughs is infectious. My wife, who is as far from a comic book nerd as can possibly get, laughed her ass off at this movie, not even getting many of the references thrown at the screen as the Titans dance and fight and cavort their way through this impossibly goofy adventure. 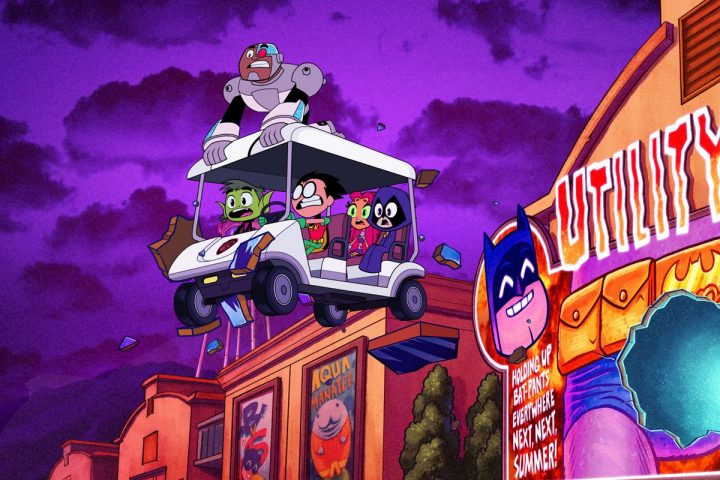 Alongside Horvath, incoming feature director Peter Rida Michail gives the film a slick verisimilitude, a television style strengthened into a big-screen outing that’s as energetic as any the DC universe has provided thus far. Casual jabs at Green Lantern, Batman Vs Superman, Wonder Woman, the comic book medium generally (a gag about Guardians Of The Galaxy had me grinning like an absolute idiot…. oh yeah, they go there) and everything in between buttresses self-referential meta-gags and outright pratfalls between a simplistic (for the kids) story about teamwork, friendship and all the good gooey stuff comic books like to espouse; it does get a bit cheesy towards the end, with Robin having to work out that just because he’s the leader of the team doesn’t mean he’s the only one in the team, but kids will lap it up and beg for more of this utter insanity without pausing for breath. For me – and this is pure geekery – the film’s stuffing of secondary and tertiary characters into the backgrounds is reminiscent of that Simpsons movie where they tried to put in every character they’d ever used; the entire DC roster makes an appearance in some form or another, with particular focus on the poor Challengers Of The Unknown, and freeze-framing this film to spot all the minor characters is going to be fun for a very long time to come. 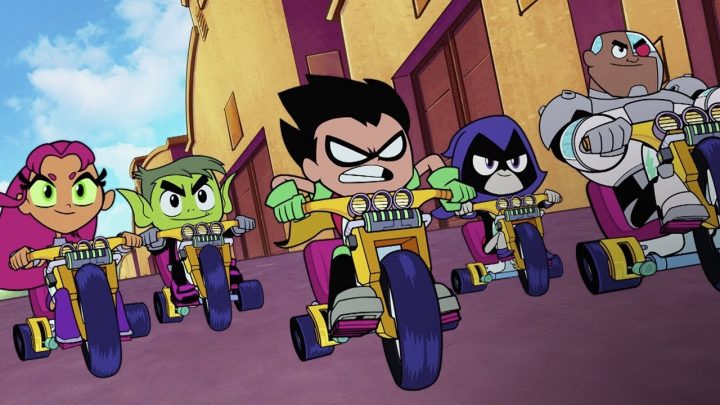 The voice cast are all perfect. There’s not a tone out of place here, as the Titans’ television series cast return to reprise their roles, while incoming guest-stars Will Arnett (himself no stranger to this world, having voiced the Lego Batman in several films now) as Slade (fans will catch the “twist” a mile away, what with Slade’s last name being Wilson in the comic books, and the in-film director of comic book films, Kirsten Bell’s Jade Wilson, being… well, you’ll see) and the various big names playing minor supporting roles as other Justice League heroes – Patton Oswalt voices the unfortunately tragic Atom, Wil Wheaton fluffs about as The Flash, and late night television host Jimmy Kimmel gives voice to the Dark Knight himself, Batman – are up to the challenge. There’s a few other voices here that will make you chuckle, and the in-joke around Batman Vs Superman’s “Martha” lament is worthy of a laugh or three, while the constant – and I do mean constant – visual references to both comic book lore and pop culture in general are gut-bustingly hilarious and awesomely cool. Whoever designed a lot of the sight-gags in Teen Titans Go! To The Movies deserves a considerable bonus. Even for me, and I’ve been reading comics since the early 90’s, I probably didn’t catch them all. The thing is, you don’t need to be a full nerd to have fun here. The world of the film is entirely self contained, and even if you’ve never seen a comic book movie you’ll still have plenty to giggle at. Of course, if you are a comic nerd like I am, you’ll have an absolute blast. 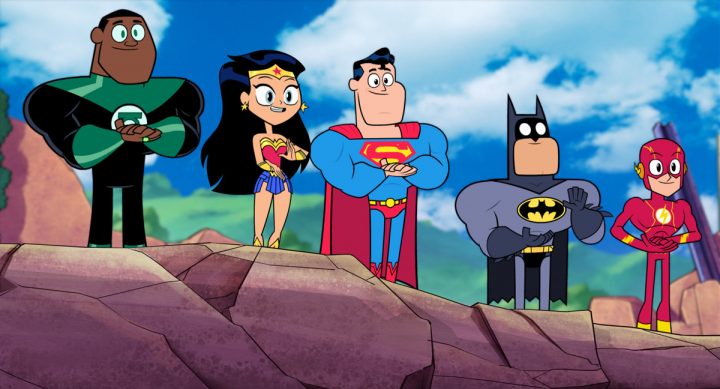 Teen Titans Go! To The Movies is hilarious. It’s a film described by my demographically perfect children as “awesome”, and unlike many standard “kids films” they were laughing a lot throughout this one. Pathos and dramatic heft aren’t always required to entertain children and adults equally, if you can believe it, and this film finds the perfect balance between silly fart and booger jokes and subtle adult-centric humour. Outlandish fun, a comic-book-movie lover’s paradise and a manifesto that DC’s animated department can apparently do no wrong (while the sputtering DCEU attempts to right its capsizing ship), Teen Titans Go! To The Movies is one animated film that will delight, delight, delight, over and over again.