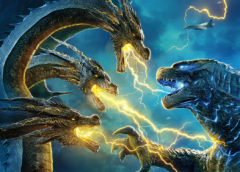 The third in Legendary Pictures’ MonsterVerse behind 2014’s Godzilla and 2017’s Kong: Skull Island, Michael Dougherty’s Godzilla: King Of The Monsters is as pure and unadulterated kaiju porn as you’ll ever see. It’s the film Pacific Rim: Uprising only hoped it could be: a slam-bang speaker rattler devoid of nuance when it can deliver monolithic scale creature battles that scar the landscape and pummel the very planet on which we live. It does what modern Hollywood “remakes” have long tried to do, in making the crazy notion of giant, city-wrecking monsters as realistic as humanly possible and planting emotionally vacant human beings right in harms way as often and as stupidly as possible. The 2014 Godzilla set in motion a cinema-destroying exercise in visual effects extravagance and earth-shattering myth-making, all of which culminates in Dougherty’s problem-plagued film delivering more monster-on-monster action than audiences could have ever hoped for in a single film. Gone is the simplicity of Godzilla lumbering through a notable American city (in Godzilla, it was either New York City or San Francisco, while in Skull Island, the titular Kong was consigned to a tiny hitherto unknown tropical island) in slow-motion and a few fuzzy miniatures and screaming green-screen hordes. King of The Monsters is, by sheer weight of on-screen monster clashes, the new benchmark for gargantuan titan battles that rattle the foundations of the subgenre itself. 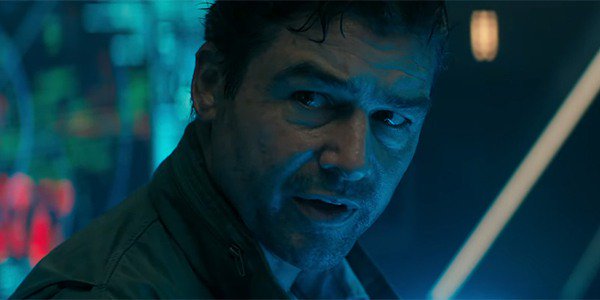 Several years after the events of Godzilla, paleobiologist Dr Emma Russell (Vera Farmiga) works for the super secret organisation Monarch, developing a form of communication (or control) over the newly established “titans”, many of which remain buried beneath the Earth around the globe. Her daughter, Madison (Millie Bobby Brown) accompanies her on her research for some reason, while Emma’s estranged husband, animal behaviourist Mark Russell (Kyle Chandler, making his second appearance in his second Kaiji franchise, after Peter Jackson’s King Kong back in 2005) continues to mourn the accidental death of the couple’s young son Andrew, but is forced to reconnect after Emma and Madison are kidnapped by an eco-terrorist group led by Alan Jonah (Charles Dance), who wants to unleash the hidden kaiju upon the Earth to cleanse it back to a more balanced state. Together with Dr Ishiro Serizawa (Ken Wantanabe, reprising his role from Godzilla, alongside a returning Sally Hawkins and David Strathairn), Mark travels the globe trying to stop the military from destroying the Titans and Godzilla, but also to work out why they cannot kill the giant three-headed dragon monster known as Ghidorah. 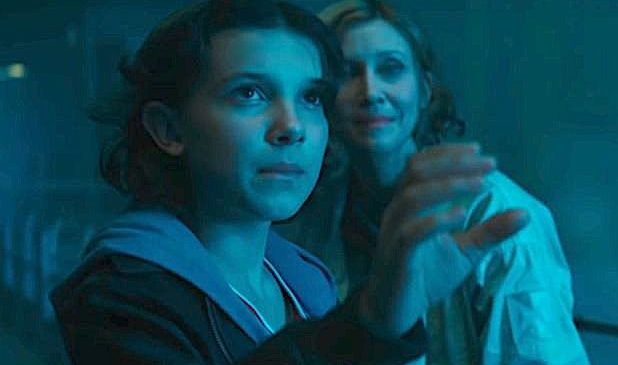 If Godzilla was the mild opening prologue, and Kong: Skull Island showcased what giant creature-fighting cinema could promise, King of The Monsters absolutely delivers the operatic-scale destruction and continent shaping carnage of Godzilla taking on not one, not two, but multiple giant creatures who threaten to send humanity into extinction. With a non-stop plot and a breathlessly awestruck sense of showmanship, the oil-in-canvas artistry of Dougherty’s sublime visuals paint over the glaring intelligence cracks and generic, one-dimensional characters with just enough fun and zeal you can’t help but be swept up in the whole thing. Some will decry the absence of intelligence in the screenplay – by Dougherty and Zach Shields – and the formulaic “people in jeopardy” schlockiness of the situational rise-and-fall plotting, and to be honest those people have every right to feel slighted considering the far more circumspect Godzilla and the far more glib Skull Island had better writing to back it up, but in terms of building-toppling destruction and Godzilla’s showdown-to-end-all-showdowns against Ghidorah in the center of Boston, King Of The Monsters is a showcase of excitement and large scale blockbuster entertainment. 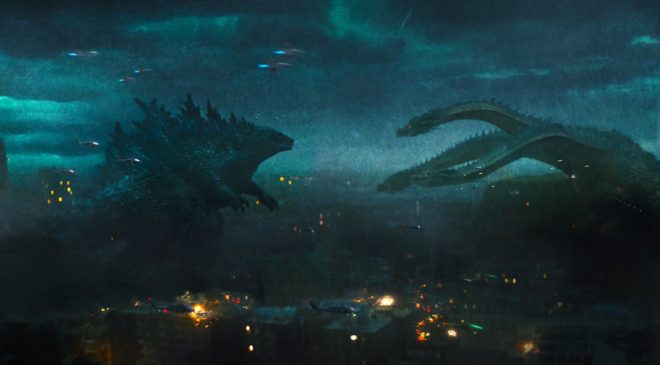 One of the major issues with these kinds of giant creature flicks is keeping the audience invested in the human element. Part of what makes us tick as humans is drawing empathy with a film’s central character or characters, and this is usually derived by placing our heroes in harms way and forcing them to grow or change as the story progresses. With modern blockbusters, however, the focus is increasingly less on the characters and more heavily favoured in the visual effects, an orgy of pixels and computer processing trying valiantly to deliver a rousing, shocking, entertaining spectacle where emotional content is largely absent. King Of the Monsters is no different: from Charles Dance’s generic and inane screen villain, to Vera Farmiga’s ignoble “right thing for the wrong reason” bewilderment, to Stranger Things’ Millie Bobby Brown’s bizarrely indifferent inclusion as the innocent-in-harm’s-way archetype, very little about this film feels fresh or different from the Hollywood Blockbuster Playbook. The sidebar characters, including the gaggle of Monarch and US military soldiers and faceless human combatants, as well as Ken Wantanabe’s “let them fight” Dr Ishio Serizawa and Bradley Whitford as the sarcastic Monarch employee whose sole purpose in the film is to break tension with a quip, offer minor attention as they search for not just Godzilla, but also the newly hatched Mothra, the giant winged Rodan, and inevitably the three-headed Ghidorah. Yet the focus of the film remains the spectacular battles and wide-scale destruction wrought by these titanic monsters of folklore. The human interest element, with the possible exception of Kyle Chandler’s emotionally tormented Mike Russell, is largely absent from the film. 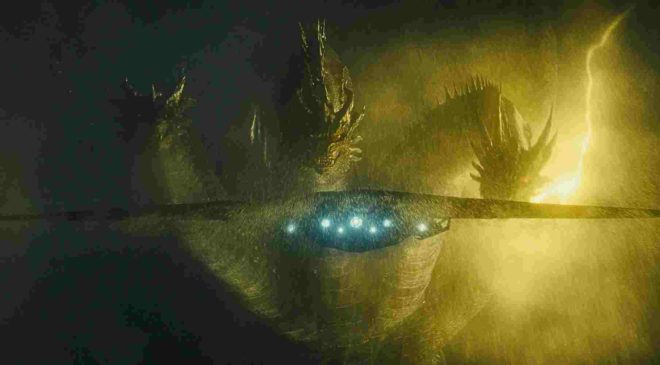 King Of The Monsters may suffer the indignity of having many of its characters say and do incredibly illogical things, but on the plus side it boasts more kaiju destruction in ten minutes than Godzilla or Kong had in their entirety. This film feels enormous, the continent-spanning jaunts embarked upon by the Monarch team headed by Serizawa occurring at Game Of Thrones Season 7-level speed and the destruction wreaked upon various locales is just shattering to behold. And it’s beautiful: the film broaches religious imagery a number of times, the gloriously saturated colour palette and Lawrence Sher’s breathtakingly evocative cinematography enshrining this movie as an achingly gorgeous piece of pop-culture art. Also of note, one of my favourite film editors, Bob Ducsay, had a part to play in the pacing and execution of the film’s gigantic aesthetic, and the accompaniment of Bear McCreary’s scintillating, pulsating score merely adds to the enjoyment. There’s a giddy joy behind the camera of King of The Monsters, the affection Dougherty has for the property running deep within the film’s DNA, and it’s obvious this is the kind of film he’s dreamed of making: it’s a kitchen sink approach that works well enough here, despite the flat human characters and silliness of plot’s insistence on fan-service. The only one I actually enjoyed? The hint of Mothra’s original theme tune from the 1961 film, which brought a smile to my face. 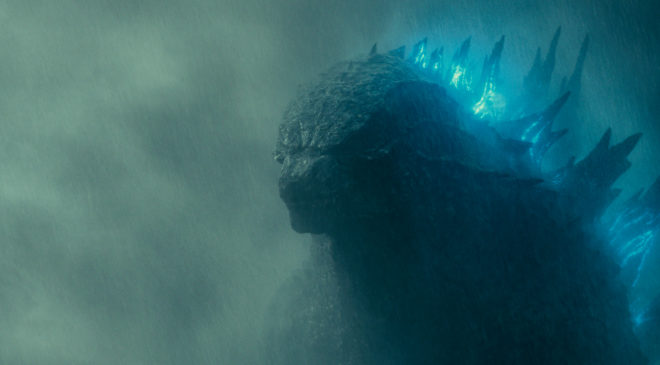 Although it never avoids the pitfalls of modern blockbuster cinema, such as shallow characters and an overblown focus on spectacle over human interest, Godzilla; King of The Monsters is an absolute cheesy blast from start to finish. It’s a Michael Bay masturbatory fantasy writ large by Dougherty’s epic visual style, a shock-and-awe showcase of destruction and crazy mythmaking (I think Atlantis even makes an appearance at one point!) that’s as giddy and as fantastic as only Hollywood can provide. Brains off, people: Godzilla has returned and he’s staked his claim as the king of all monsters. King Of The Monsters is a doozy!