American mythology is a strong subject for Hollywood’s insatiable creative machine. None moreseo, perhaps, than the incredibly popular true-crime subgenre, of which The Highwaymen forms a part of the pantheon. During the Great Depression, Clyde Barrow and Bonnie Parker terrorised middle America as they embarked upon a violent and lengthy crime spree, notable for the murder of a number of law enforcement officials and perhaps even more memorable for the method of its conclusion. Bonnie & Clyde were hugely popular anti-heroes, their legacy romanticised in media-driven poetry about their blood-soaked exploits and even turned into a film in 1967, directed by Arthur Penn and starring Faye Dunaway and Warren Beatty. They became an early form of criminal celebrity, if you will, and national attention turned to the seemingly inept pursuit of them by local constabulary. The Highwaymen tells a different story to the Penn film, in that it peels back the romantic notion of the pair’s criminality and depicts them an inhuman monsters, with the core focus on former Texas Rangers Frank Hamer and Maney Gault, who were tasked by then Governor of Texas Ma Ferguson to hunt the Barrow Gang down and bring their reign of terror to a halt. 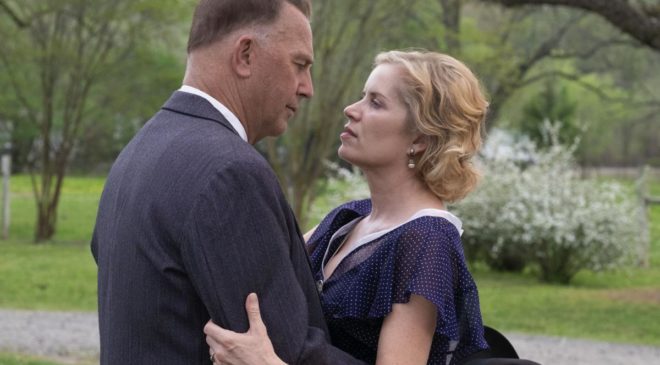 Quiet, moody and melancholy, The Highwaymen stars Kevin Costner as former Texas Ranger Frank Hamer and Woody Harrelson as his partner Maney Gault, who are seconded by Governor Ferguson (Kathy Bates in perfect scenery-chewing mode) to hunt down the Barrow Gang independent of the FBI, who are also on their tail. The lack of success by local and national law enforcement in capturing Bonnie & Clyde has made them media darlings, newspaper-selling anti-heroes who continue to make a mockery of Johnny Law with each passing day of their freedom. Hamer and Gault venture to Barrow’s childhood home, where his father, Henry (William Sadler) still lives with the daily routine of passing FBI and Police officials through his quiet streets, and begin the long pursuit of locating and then setting a trap for the pair of violent murderers. Overcoming jurisdictional restrictions based on Texan authority, Hamer and Gault recruit a local childhood friend of the pair (and now Deputy Sheriff himself) Ted Hinton (Thomas Mann) who can identify them on sight, and prepare their trap thanks to moral weakness of an associate of the gang’s. 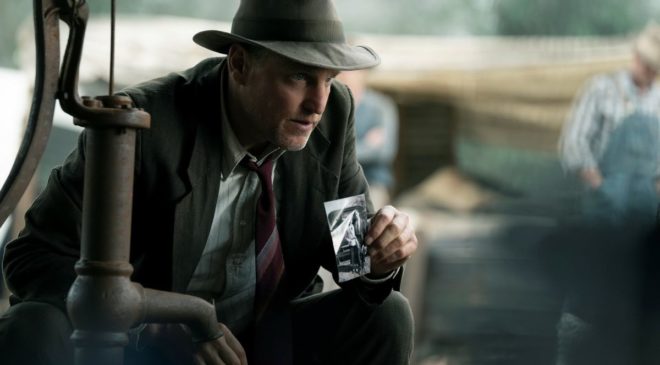 In essence, Bonnie and Clyde are largely faceless and distant prey for Costner and Harrelson’s quarrelsome pair. The focus of the film sits comfortably with the two Hollywood heavyweights, and watching the pair bicker and snipe at each other as the film progresses is easily it’s biggest selling point. The story lacks a bit of zing, to be honest, and John Fusco’s screenplay, while honest and obviously driven by Frank Hamer’s reluctant vigilantism, remains frustratingly opaque, although whether it’s the direction or the performances that render the film so inert I’m still not entirely sure. Costner, as Costernery as he can be, feels on-edge furious as Hamer, while Harrelson’s blitheringly drunken and emotionally broken Gault is a masterstroke of tragi-comedy genius, and as an on-screen partnering you can hear the screen shrieking with their chemistry. The undercurrent of “you just missed them” detective work and sniffer-dog hunting allows for mild tension to build although neither Hamer nor Gault are afforded the capacity to move beyond their “legendary” status. Hamer’s storied past is given far more heft than Gault’s, and to their credit both Costner and Harrelson do solid if undemanding work in their respective roles; you get the sense that a more electrified director or more precise screenplay could have wrought something far more powerful. 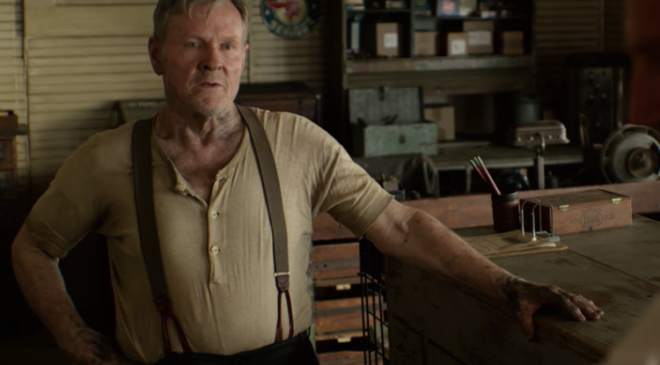 At it’s heart, The Highwaymen is a journey not of discovery but recovery: both men are haunted by the ghosts of their respective pasts (and Gault with his own personal present, given he’s on the breadline hit hard by the Great Depression) and seeking some form of redemption, although for what purpose I wasn’t ever quite sure. Mysterious legend makes for compelling heroism in films such as this, but The Highwaymen never quite pays it off. Instead, director John Lee Hancock, known for soft-touch affairs such as The Blind Side, Saving Mr Banks and 2004’s The Alamo, creates an atmospheric and fitfully entertaining period affair that never quite gets out of first gear. Great supporting performances from Kathy Bates, John Carroll Lynch (as Lee Simmons), Thomas Mann (as the Deputy brought along for the ride) and a single, award-worthy scene from William Sadler, prevent The Highwaymen from burying itself in “setting the record straight” on the whole Bonnie & Clyde affair, of which it achieves a fair bit. The moody, slowly-paced script, plentiful pauses, and leaps of logic, however, make for fussy and often unfocused viewing.

As a student of history I admired the intent of, and often enjoyed, The Highwaymen. Watching old stagers like Costner and Harrelson do their bit with solid characterisations amidst the fuddly storytelling is always enjoyable, no matter what the overall film is like. And the film isn’t bad: it’s just not as good as it could have been. Production value is excellent, the Thomas Newman’s score is effective and evocative, and John Schwartzman’s cinematography is sublime, even worthy of Oscar consideration. You can see where the film was intended to go, what it was trying to achieve, and largely succeeds in spit of a haze of sentimentality overshadowing things. It might be a more accurate representation of a fascinating piece of American folklore and history, and a far more honest portrayal than Arthur Penn’s generally glamorous and salacious film, but the heavy-handedness with which John Lee Hancock approaches his subject matter voids a lot of entertainment value within. Worth a look purely to watch Costner and Harrelson work together.

2 thoughts on “Movie Review – Highwaymen, The”