Dazzling sci-fi fare from producer James Cameron and director Robert Rodriguez sees the future turn out to be a beautiful utopia: eschewing the dirty aesthetic of Star Wars or Mad Max, the world of Alita: Battle Angel finds us pitched into a slightly rundown but altogether gorgeous dystopian world where the poor and downtrodden constantly seek to make their way to a giant floating city in the sky to escape their plight, a world that feels like it’s all too familiar and a touch too safe but works well enough for the glorious titular character, played by YA franchise regular Rosa Salazar and aided by astonishing state-of-the-art visual effects. 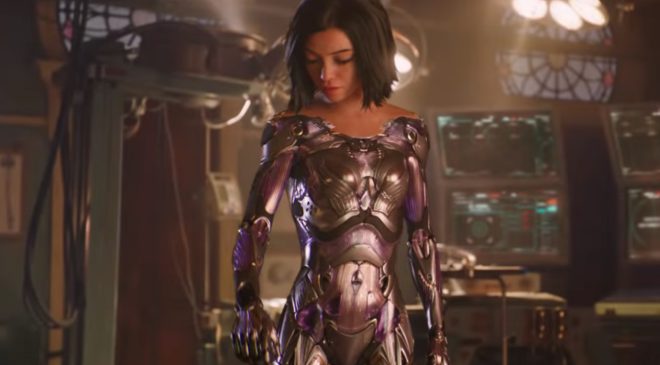 Five hundred years into the future, and three hundred years after the near extinction of humanity following an interplanetary war known as “The Fall”, local cybernetics scientist Dr Dyson Ido (Christoph Waltz) discovers the still-viable remains of a long dormant female cyborg; attaching a synthetic body to the cyborg remains, Ido awakens the being and names her Alita (Rosa Salazar), after his deceased daughter. Ido’s estranged wife, Dr Chiren (Jennifer Connelly), who is also a cyborg engineer, now works for criminal entrepreneur and master of the local popular sporting competition of Motorball, Vector (Mahershala Ali), and harbors a resentment of her daughter’s death and her failure as a mother. Alita, who cannot recall her past through some vague cyborgian amnesia, befriends local hottie (and sometime petty criminal) Hugo (Keenan Johnson), who aids her in discovering who she is and propels her towards her destiny of reaching the luxurious sky city of Zalem, where the evil Nova – criminal mastermind of all the poor and destitute below – resides in secret. 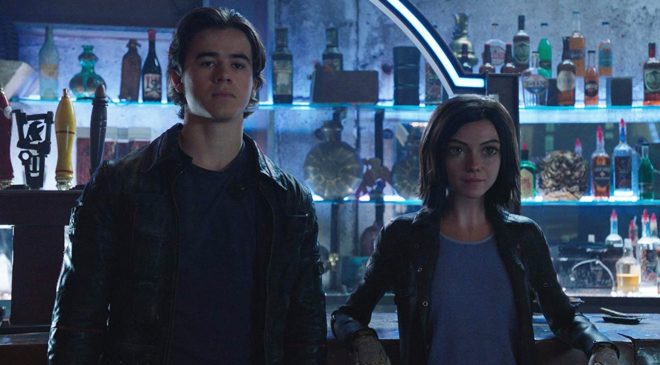 With the assistance of New Zealand effects powerhouse WETA Digital, the CGI-mo-cap blend used to bring Rosa Salazar’s Alita to life is an absolute triumph. As an effects-driven feature, Alita: Battle Angel is near faultless, a full-fleshed out world of the future where things seem familiar but have a weird not-quite-the-same feel to them. Visually, there are few films to rival this one in 2019, and the distance between Alita and it’s decade-previous James Cameron brethren Avatar is practically light years in technical mastery. Robert Rodriguez, who has invested heavily in all-CG effects-driven films for decades now, broaches new territory as a filmmaker, elevating above his gritty, pulpy, grindhouse roots and delivering a polished tentpole blockbuster that works, equalling his bravura turn on Sin City and solidifying his chops despite the shadows of the increasingly banal Spy Kids franchise. Rodriguez, who directs a screenplay by James Cameron and Alexander and Shutter Island scribe Laeta Kalogridis, works with a franchise derived from the incredibly popular Manga franchise of similar name (although it’s titled Gunnm in its native Japan) and while the Hollywood version obviously deviates from the comic book lore, it retains an enthusiasm and refreshing uniqueness enough to overcome more than a few of the flaws buried within. 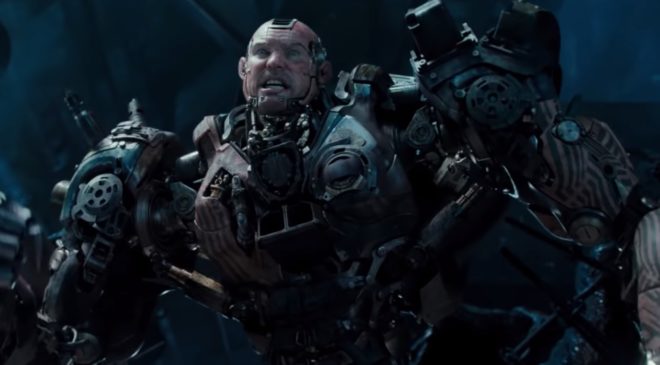 At its core, Alita: Battle Angel riffs heavily on Frankenstein and aspirational dystopia, tropes that have become well trod pathways in the sci-fi genre, and while the film’s crisp digital textures and mind-blowing visual effects do a lot of the heavy lifting to persuade the audience to enjoy themselves, the story doesn’t solidify enough or provide focus enough to justify this much money being spent on it. Alita’s search for her past memory (the film features a couple of nice cameo appearances) and her relationship with both Dr Ido – who serves as her father figure – and Hugo, who serves as her swoonworthy love interest aren’t as interesting (to me, at least) as the overarching subplot involving Mahershala Ali’s Vector and his powerplay of the Motorball competition, which is essentially a souped up Rollerball contested by cyborgs. The subplot involving Ido and Dr Chiren’s lost daughter feels tacked on, and the method of story delivery involving Vector and Nova and the gamut of enhanced goons on Alita’s trail is constantly pushed aside in favour of oblivious character development that never gels, but the action is ubiquitously terrific and Alita herself is a sublime, intriguing prospect despite gulfs of plot inadequacy. The dialogue is bewilderingly optimistic, almost utopian in its hopefulness and superficial in its dramatic impetus. Alita goes from newly reborn cyborg refugee to superhuman killing-death machine inside about thirty minutes, a story arc that hedges its bets on potential sequels (this despite the film’s ending setting us up for a lot more battling angels in future) when it ought to have gone for the jugular. 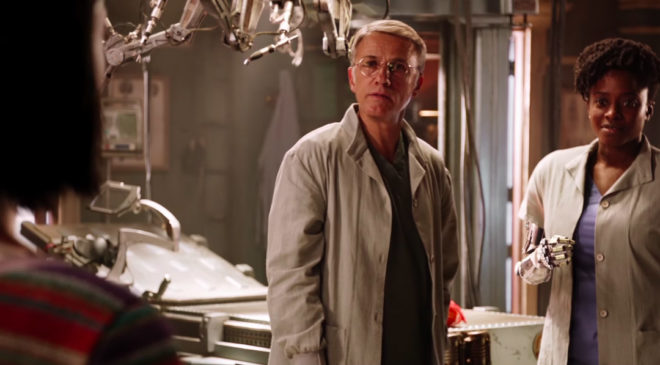 The surface world of Earth isn’t a particularly pleasant place to live, if you listen to its inhabitants, but the film never fully fleshes out the tragedy or wretchedness of our future world beyond simply suggesting it. The dirty streets of the city in which Ido and his fellow denizens reside aren’t so much a sewer as they are an urban jungle of decay and polished reminders of Earth’s prosperous history, bathed in brilliant sunlight almost constantly, whilst the omnipresent mood of danger hidden in the shadows of the world’s nightscape feels akin to Rodriguez’ own highly stylised Sin City. Neon and dusky metallics provide the gloom and pinpointed glitterati of the surface city’s aesthetic, and many of the film’s major action sequences are set within this delightfully delicious tableau. The crisp CG and near faultless myth-making on display at a visual level is, as mentioned, a level above what we’ve seen in live action before, and both Rodriguez, James Cameron and the people at their computers at the effects houses ought to be mighty proud of their achievements in deceiving the human eye here. Alita had potential to trip headlong into Uncanny Valley, the place where Robert Zemeckis’ mo-cap career went to die; through scintillating tones, hues and textures, the magnum opus of which is the central character of Alita looking like a photo-real human in virtually every frame, Alita: Battle Angel is a remarkable landmark film for its technical accomplishments. 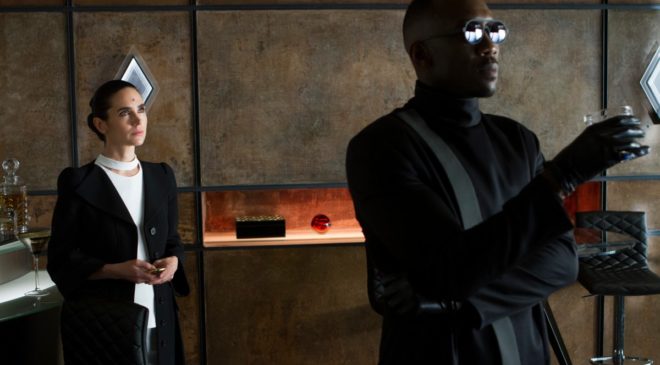 While its roots in Japanese storytelling feel homogenised and softened from the original comic lore to appeal to Western audiences, Alita: Battle Angel has more than enough fanciful action and generic, sci-fi mystery-box Frankenstory working in its favour to overcome several gaping problems. Notably, Alita’s love interest, who in no way was ever believable for a second despite the very pretty Keenan Johnson’s best work; the character is like a generic John Hughes heartthrob role that stinks up a large portion of the film’s intended romantic angles. The villains of the film are the real showstoppers here, alongside Alita herself, even if the mish-mash amnesiac story thread alongside the deux ex machina conclusion might throw more discerning viewers off. The film is nothing if not rewarding (if not entirely too keen to go a touch too long and reveal a few too many twists in its increasingly overbearing third act) for its vivid perspicuity; as a benchmark in the evolution of photo-real human characters on the big screen, Alita is going to take some beating.