Stephen King does zombies? Oh, yes please! Crap acting, terrible jump-scares, and mid-80’s gore-horror? Well, er… maybe. Pet Sematary is – and I know I’m going the early crow with this in my opening paragraph – a terrific idea ruined by some truly repellent acting performances and a film-making style unable to match the concepts behind it. It’s laughably bad, not even in that “so bad it’s good” way everyone hopes shitty films will be; Pet Sematary is a blight on cinema and subgenre films like this one, a hackneyed stinkpile of slop masquerading as worthy entertainment. 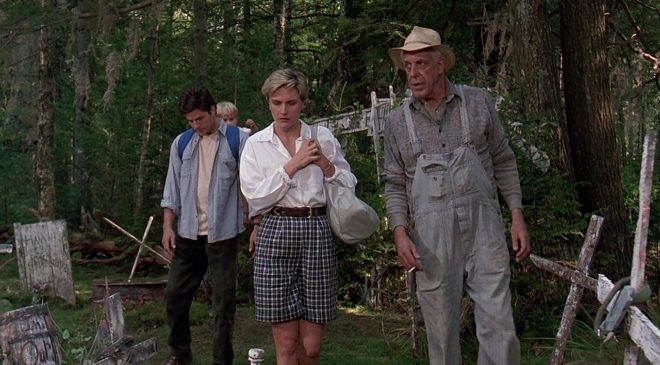 Doctor Louis Creed (Dale Midkiff) and his family – wife Rachel (Star Trek The Next Generation’s Denise Crosby), daughter Ellie (Blaze Berdahl) and young son Gage (Miko Hughes) – arrive in a small rural Maine town from Chicago to begin a new life. They purchase a house on a stretch of busy road, across from whom lives the elderly resident Jud Crandall (Fred Gwynne), as well as a nearby pet cemetery. After the family’s cat is accidentally struck and killed by a passing semi-trailer, Louis and Jud take the animal and bury it in a nearby Indian burial ground (why? Who knows…); the next day, Louis is shocked to discover Church has returned to life, albeit in a decidedly unfriendly mood. Realising the ground beyond the pet cemetery has the power to restore life, a heartbroken and desperate Louis, distraught over the sudden death of Gage on the same stretch of road, takes his son’s body there as well: with horrifying consequences. 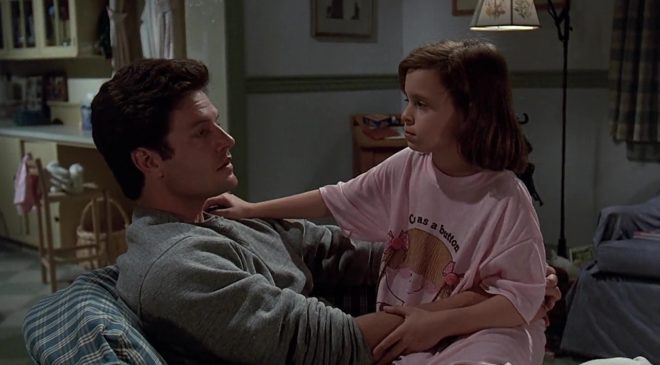 There are minuscule bits to Pet Sematary that work. The casting of Fred Gwynne, an actor born solely to appear in horror films had he not been typecast as Hermann Munster for all those years. The delightful Maine locations used by the production. The idea of a pet cemetery used to bring dead animals back to life. The ghoulish practical gore effects that still hold up. Elliot Goldenthal’s brusque and effective score. These things, however, cannot undo the unfathomable other casting choices, and derelict direction by Mary Lambert, in bringing Stephen King’s classic novel to life. Few films have been as annoyingly frustrating to me as Pet Sematary, a film upon which Stephen King’s screenplay (the writer himself appears in a cameo as a church minister) seems to be creaking and groaning towards a conclusion so daffy, using logic so baffling, it defies sense and reason. The idea behind the premise is solid (it’s Stephen King, after all) but the screenplay and subsequent film never quite elicits the kind of fear or withering terror the source material engenders. 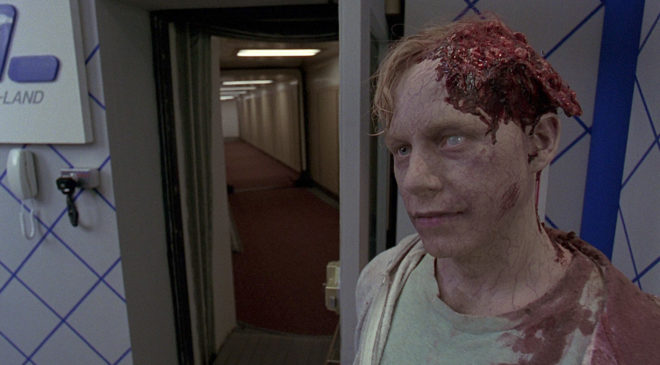 Not for lack of trying, though. Lambert’s direction hits all the cliches of this kind of genre piece, with lots of portent and overt foreshadowing and a dog’s breakfast of assorted jump scares and horror cliches – the predictable funeral where everyone starts punching on and screaming is a nice example – but it never truly evinces genuine threat. The notion of a zombie cat is both awesome and inherently stupid, and the film’s depiction of such a creature depends more on the human cast to react to it than anything accomplished by the live animal used on-screen, but at no point does it ever really scare you. As mentioned, the lush Maine locations and normalcy of rural life contrasts heavily with the now trite “Indian burial ground routine” premise – established to popular effect in 1977’s “The Amityville Horror” novel and now a staple for genre films like this – which might work on a subconscious level in King’s text, but manifests inadequately through Lambert’s direction. It looks cool, but the film’s brisk pace doesn’t allow the presence of evil to marinate. 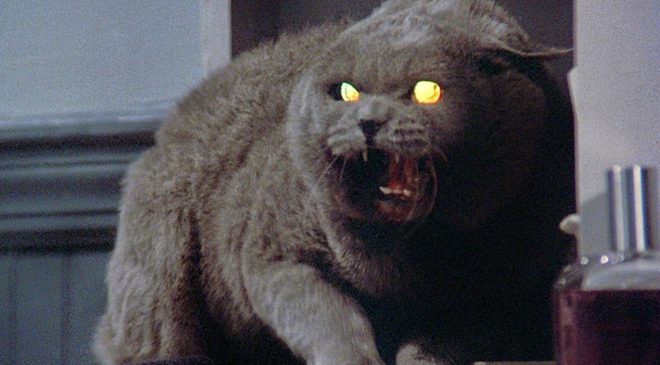 Defeating all efforts to entertain the audience, however, is some of the worst on-screen acting since Maria Pitillo did her New York wannabe-journalist in Godzilla: Dale Midkiff is awful as Louis Creed, a good looking dude with a limited emotional range, and even less ability to bring that onto the screen. His performance is so stilted, so wooden, I’ve seen oak tables with more screen chemistry. Denise Crosby doesn’t fare any better, with a superficial and screeching rendition of the typical poor confused housewife, whilst Blaze Berdahl, as the couple’s on-screen daughter, is laughably bad. She’s a kid, I know, but there are far better child actors out there and the choice to cast her in such a pivotal role is bewildering indeed. She literally cannot act, and watching the poor lass try is cringe-worthy. Youngling Miko Huges is obviously cute as a button in the tragic role of Gage, and the variety of supporting roles personify typically creepy horror-film ephemera (notably Brad Greenquist as the deceased-yet-ghostly Victor Pascow, a crucial element in the plot’s ongoing haunting narrative), but the film’s chief asset is Fred Gwynne. Gwynne is brilliantly effective as Jud Crandall, the local town resident (and Indian mythology expert) who knows more than what he’s letting on. His gaunt visage and amenable personality make him a remarkable on-screen presence, a grandfatherly paternalism giving way to knowing haunted fear when things take a decidedly supernatural turn. Of the entire cast, only Gwynne escapes this film with his dignity intact. 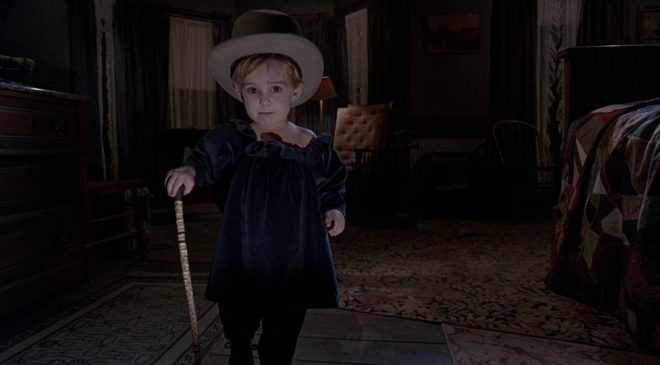 A film like Pet Sematary should be a doddle for any studio to make bank off. It should also be a home run for any halfway competent filmmaker, what with King’s accessible sense of ominous dread, and the central plot conceit practically writing itself for the screen. The fact that this film is so goshdarn awful, so ineptly acted and so homogeneously directed is problematic in so many ways, the least of which is that it turns King’s effective page-turning chiller into an undercooked schlock travesty. With ideas that go nowhere (or are never explained fully) and sidebar characters that feel too thinly developed, as well as ghastly logic holes and silly personality traits for the leading characters, Pet Sematary is a remarkably horrid film that rarely achieves its purpose, and only then seemingly by accident.