For a film entitled The Bible: In The Beginning, John Huston’s laboured dramatic mounting of the first few books of the Old Testament is certainly… biblical. Suffice to say, they don’t make epics like this any more, and when they do they’re usually a visual hodgepodge that skews as far from the Bible as it’s possible to get before it becomes not the Bible. Separated into several sections, recounting the Creation Story, the arrival of Adam and Eve in the Garden, Noah and the ark, the Tower of Babel, and a lengthy portion on Abraham, Huston’s film wants not for scale and scope, nor does it tread far from the scriptures as we know them – take heed, Darren Aaronofsky – but by all that’s holy this film is dead boring. 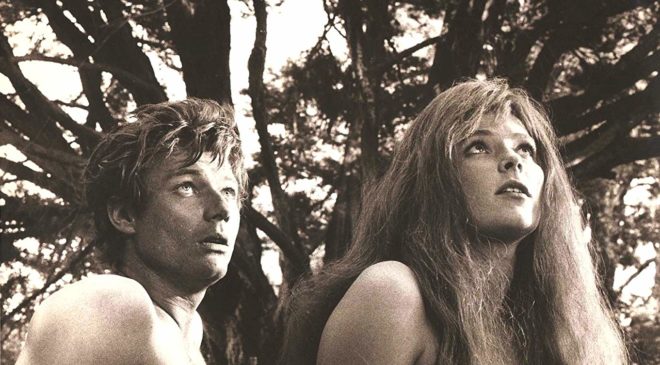 The middle of the 20th Century was a fearful time for Biblical cinema. Massive productions and epic stories retold various elements of Christianity’s favourite novel, including (but not limited to) Ben Hur, DeMille’s The Ten Commandments, The Greatest Story Ever Told, and Barabbas being a few films released during the height of the genre’s popularity through the 1950’s and 60’s. Some, like Ben Hur, deserve the praise and adulation heaped upon them, for they folded faith-based storytelling into a larger (far more fictional) narrative that evoked grandeur yet retained humility and humanity. Some, however, focus more on spectacle over story – The Ten Commandments is perhaps the most egregious of those listed above – and tend to vacillate between pompous and arrogant. John Huston’s 1966 opus, a nearly three-hour Biblical retelling in its luxurious widescreen format, falls swiftly onto the side of pretentious theatricality, a charisma-free but expensive attempt to kick off a multi-film saga in which the entire Old Testament is given the “greatest hits” treatment by dragging willing Christians in off the streets to see their favourite Bible stories brought to thrilling life. Whether you think Huston’s film is a thrill or not, you can’t argue the man’s passion for what he achieves on the screen visually, which is arguably excellent, if only the story and characters felt a little less stiff and adhered too rigidly to the printed word. 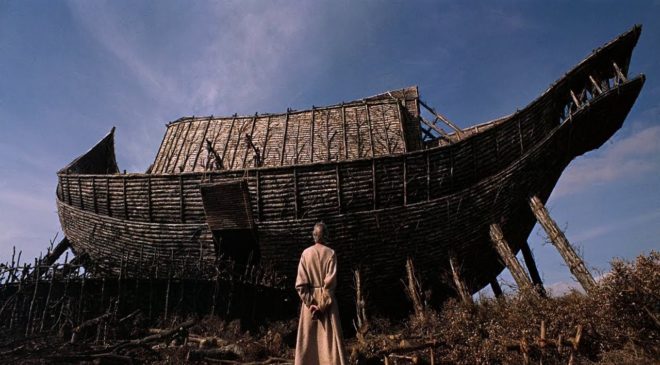 The film kicks off with a protracted Creation sequence, cuing up a variety of volcanoes, waterfalls, oceans and bursts of sunlight to depict the most famous opening paragraph in all of literature. Once we get past this, thought – some ten minutes later – we are startled to see a very young and very naked Michael Parks, he of Tarantino cult-film fame, lying in the Italian backlot they decided was The Garden of Eden. Parks mugs gratingly for the camera, as Adam he must appear virtuous and innocent, which is a stark contrast to many characters he would play in his more recent career, and when the delectable Ulla Bergryd shows up as Eve – looking for all the world like a Blue Lagoon-like Brooke Shields was crossed with a Splash-era Daryl Hannah – things seem to be heading in an excellent direction. But the film’s exposition is told almost exclusively through narration, an omniscient God not just showing us what’s going on but making sure the YE OLDE KING JAMES LANGUAGE REMAINETH INTACTETH, which is nothing if not annoying as all get out. 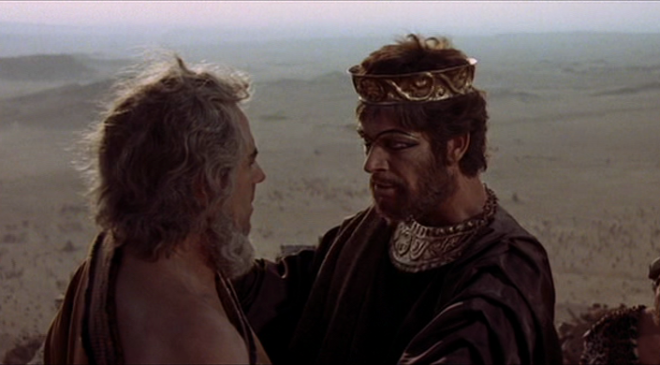 Once Adam and Eve are booted from the Garden, we cut to a respite from all this nudity with a lanky, vaudevillian John Huston playing Noah, side-eye glances and all. Huston’s decision to cast himself as Noah came after failed attempts to woo Alec Guinness and Charlie Chaplin for the role, and it would be an untruth to suggest I couldn’t see them in the role, but Huston fills out the part magnificently. Sadly, however, this is where the film’s strongly defined rigidity to King James’ flowery language ruins the seriousness of the movie: everyone speaks in Ye Olde English, as if they’ve all stepped right out of Eton or Cambridge, to the point where you can see the various Italian supporting cast mangling the words and internally rolling their eyes at the silliness of it all. I know, this was the thinking of the 1960’s as to how “modern” audiences wanted to see the Biblical stories represented, but the dialogue throughout the entire film, from portentous narration to Huston’s gloriously Santa-esque Noah to poor George C Scott’s block-of-granite Abraham, is atrocious. At least to modern ears, I think. Admittedly, the Noah’s Ark sequence isn’t designed for depth of intellect or expanding our understanding of the Biblical text as much as it is showcasing the film’s inordinately large budget: reputedly between 15 and 18 million dollars, which is splashed entirely up on the screen. The Ark sequence, in which several different sized arks were built, including a full sized one on a soundstage in which hundred of live animals were corralled for filming, is truly awe-inspiring in a visual sense, despite having the emotional complexity of a rock. 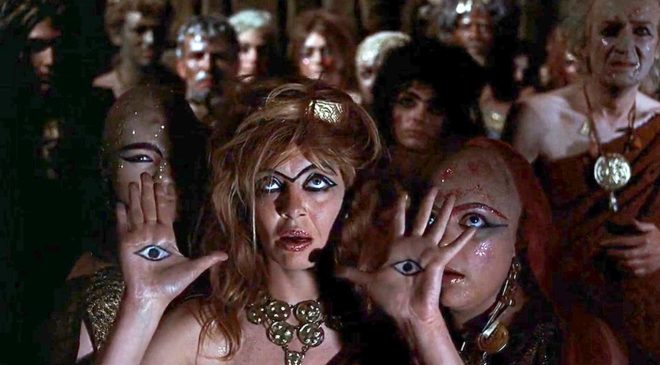 A brief sojourn to the Tower of Babel and an appearance by an unrecognisable Stephen Boyd as the local King, Nimrod (titter), is impressive to say the least, before Scott’s Abraham and his multiple wives and varying solemnity to Biblical behaviour arrives to close out the film. Scott is stoic as the Biblical titan, imbuing the role with a sense of presence he’s vastly overqualified to deliver and yet bizarrely off-key with how flat and impenetrable he makes the role. Poor Ava Gardner, as Abraham’s barren wife Sarah, and Zoe Sallis, as Abraham’s other wife Hagar, are given short thrift as the film skips across the decades and years to contort a fairly considerable chunk of contextualisation into a few all-too-brief moments of character development; in trying to give us everything, Huston and screenwriter Christopher Fry end up giving us nothing, certainly nothing of any humanity or interesting complexity. Instead, it’s a basic, generic play-by-play of the Old Testament’s biggest names and heaviest hitters, a roll-call of Star Power acting talent dashed onto the rocks of unfeeling, over-enunciated theology. There’s no warmth to the film, no sense of humanity, just one-note characters with a vested interest in staring off into the middle distance as often as possible. 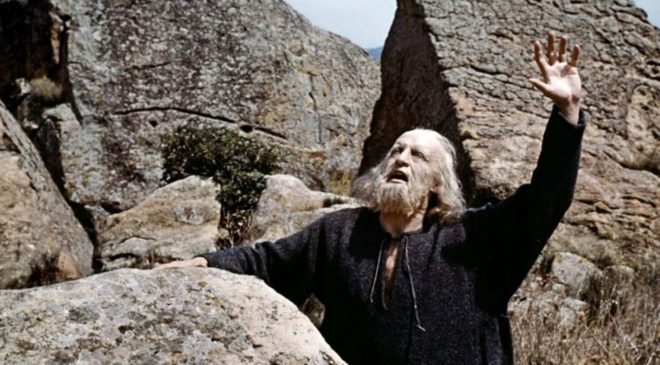 The film’s chief flaw is simply that it’s boring. Flat, lifeless direction, uninteresting characters and almost no development of any of the major players beyond that which we can find in the texts, leaves The Bible: In The Beginning defeated before it can begin. There’s no energy here, no sense of showmanship despite the huge budget – the Babel tower sequence is lavish and grand in scope, with countless extras in the background of some no-doubt African desert-scape adding depth to the film’s almighty purpose, but the sequence is poorly explained and has almost no discernible meaning for those unfamiliar with the story – and Huston’s ponderous, laborious narration and inexplicable desire to skip large chunks of the Bible’s text that might provide substance to the stories he’s telling, reduce the film to that which I described earlier: a greatest hits montage done better in other films. The film seems to think we’re in love with it before we’ve even seen it, or that we should regard it with the same adoration Christians do for their faith every day, only without any work to accomplish it. Commendable special effects – and the film does boasts some brilliant production design, cinematography, and an admirably enthusiastic score (by Toshiro Mayuzumi and an uncredited Ennio Morricone) – can’t salvage this trainwreck Bible epic from hurling itself onto the rocks of iniquity and dashing all hope of entertainment. 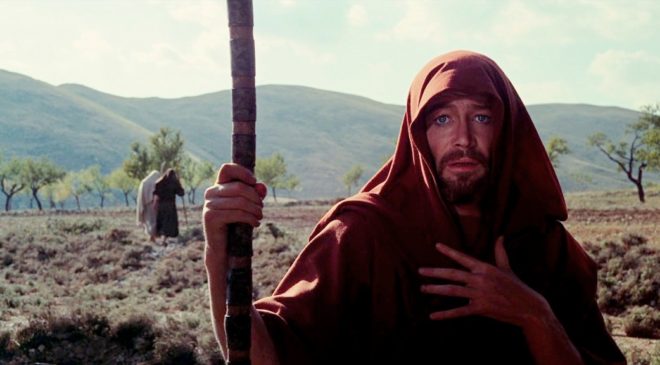 The Bible: In The Beginning was supposed to kick off a 1960’s Old Testament Cinematic Universe, and a bit like Universal’s abortive Dark Universe, it put the cart before the horse and went down in hideous flames of pretentiousness. It’s a hugely expensive stage-play version of the Bible, a massive fan-fiction mounting of classic theological stories that leave their intentions behind and focus on the well known beats. Blink and miss Richard Harris, blink and miss Peter O’Toole, gaze in wonder as George C Scott spends the film gazing in wonder, and gasp at the ludicrousness of Huston’s Noah trying to hide from God with an ongoing sight-gag involving double-takes, and you’ll have a ball just laughing at how truly lifeless this listless, gargantuan disaster ends up being. Or, to save some time, skip it and re-watch Charlton Hestone’s Ben-Hur again.

1 thought on “Movie Review – Bible, The: In The Beginning”