Arguably few comic book characters remain as popular or enduring as Spider-Man. Arguably few cinematic franchises have been as polarising and crowd-pleasing as that of the web-slinger’s silver screen exploits; from his early days as a television hero to Sam Raimi’s big-screen adaptation, his competent yet unrewarding reboot as The Amazing Spider-Man, to his applauded inclusion into the Marvel Cinematic Universe, Spidey’s antics have kept in the forefront of public consciousness since he debuted on the printed page back in 1962. Sony, who hold the rights to the character (and struck a deal with Marvel to have him be a part of the MCU following the failure of Amazing Spider-Man 2 critically) have long sought to establish the character in his own solo universe themselves, without relying on the MCU heavy-hitter brigade to prop things up. Suffice to say, the Chris Miller/Phil Lord led production of Spider-Man: Into The Spider-verse, hits a knockout home run in giving Sony their first true success with the property since the early 2000’s, delivering a mind-blowing adventure that balances multiple expectations: delivering a new character neatly into established cinematic lore, giving the world-building an almighty kick in the right direction, and making the film as visually spectacular as any animated film has ever been. 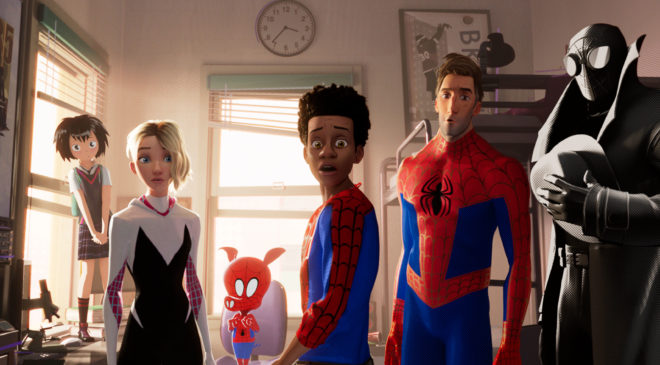 Young Miles Morales (voice of Shameik Moore) lives in New York City, attends a prestigious midtown college, and dreams of being an artist. His father, NYPD cop Jefferson Davis (Brian Tyree Henry) has a general disdain for local vigilante hero Spider-Man (Chris Pine), while Miles struggles with attending a school far from his home in Brooklyn. One evening, Miles heads underground with his favourite uncle, Aaron Davis (Mahershala Ali) to graffiti an abandoned underground subway line, when he is bitten by a radioactive spider, before awakening the next morning exhibiting special powers. Returning to find the spider that bit him, Miles is thrust into a battle between Spider-Man and the Green Goblin, whereby they reveal a hidden underground particle collider where the evil Kingpin (LievSchreiber) is attempting to break reality in search of bringing his deceased wife and son back to our world. In a cataclysm, Spider-Man is killed and the shockwave brings a number of alternative dimension Spider-people into our world, including a different Peter Parker (voice of Jake Johnson), a weird noir Spider-Man (Nicolas Cage), a pair of cartoonish versions (John Mulaney and Kimiko Glenn), and a young woman, Gwen Stacy (Hailee Steinfeld), on whom Miles develops a mild crush. As Kingpin’s plans to activate the collider and breach dimensions once again takes off, Miles, together with his new allies, seeks to thwart the scientific advances of one Olivia Octavius (Kathryn Hahn), who is in cahoots with Kingpin’s plans to destroy Spider-man utterly. 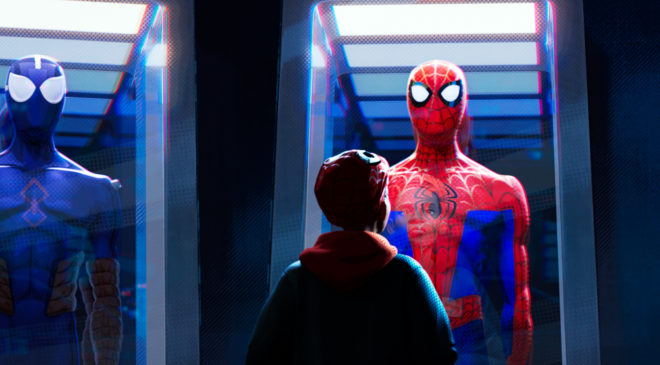 While casual cinema audiences would already be familiar with the Peter Parker version of Spider-Man, the comic book fraternity has enjoyed the adventures of Miles Morales’ version on the character since his introduction in 2011, co-created by Brian Michael Bendis and Sara Pichelli. An African-American kid with all the same kind of teenage problems of Peter Parker’s version, and a couple of different powers to complement the more traditional Spider-Man abilities: Miles could camouflage himself and is clothes – rendering him invisible to his enemies – as well as deliver a “venom-strike”, which could temporarily paralyse his foes. These abilities and personality traits are key influencers in Into The Spider-Verse, a discombobulating, stylish smorgasbord of Spider-history and meta-references, smashing the fourth wall utterly in broaching the barrier between cinema, comic book fun and our own real-world love of the character. Miles may be unknown to non-comic readers, but if this film is anything to go by, he’ll be a household name now. 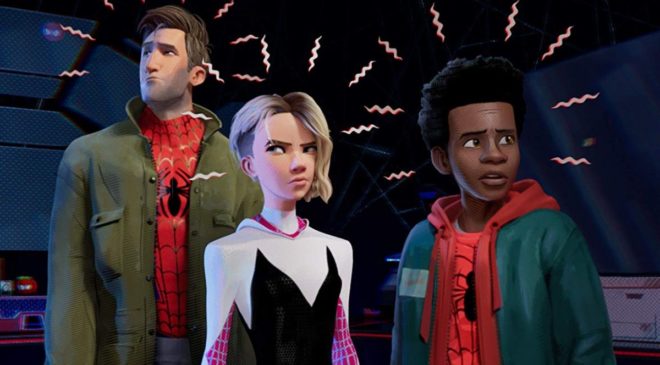 Spider-Man: Into The Spider-Verse is a truly remarkable piece of pop-culture entertainment. It does a number of key things really well, including introducing mainstream audiences to a character who effectively “takes over” from Peter Parker as the current incarnation of Spider-Man in the intervening time between Avengers Infinity War (in which Peter Parker died at Thanos’ dusting hand) and his inevitable return (in either Far From Home or Avengers Endgame); Morales teen-centric backstory and fractious relationship with his parents encapsulates his empathetic drawing power, making him a relatable character for both adults and kids alike, and Shameik Moore’s terrific voice-work in the film bottles that feeling of youthful exuberance and immature conflict with perfection. The film’s screenplay – by Phil Lord and Rodney Rothman, after a story by Lord – is a rat-a-tat blast of comic hyperbole and sentimental simplicity, balancing the comic-book-y adventures of fantastical characters with the urban concrete-ness of Miles’ family and personality, and in one of the more impossible feats of storytelling of 2018 makes us instantly hook into Miles’ fate, appreciate the large ensemble roster of character (all of whom have their “moments” within the larger context of the film), and engage with the story as it bustles along with electrifying ferocity. 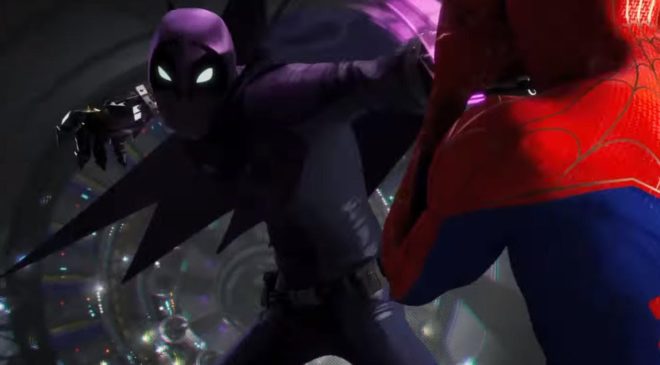 Into The Spider-Verse is a near-perfect animated film, not just with its peculiar visuals (which I found initially tough to “get” but by the end found them utterly thrilling) and sublime writing of its various characters, but in that it subverts expectations of a Spider-Man film of any kind. Having cut my Spider-teeth on the Raimi films, and worked through the increasing technical virtuosity of the other live-action variants, I figured I’d seen it all with regards to this character: not so, for this animated Spider-Man film delivers all manner of brilliantly beautiful surprises, not just in its gravity-defying camerawork and frantic, throw-everything-at-the-screen orgy of colour and movement, but in its carefully constructed twists and plot development that, on second watch, is far cleverer than one might otherwise expect in a “cartoon” movie. Suffice to say, the film looks spectacular (a sentiment I don’t mind equating to a film in which its star is Spider-Man), with dynamic comic-book-infused artistry that demands multiple re-watches and incredible attention to detail. The textures of each character differ vastly, from Miles’ jagged-edged slick-lined central performance, to Nicolas Cage’s monochromatic “noir” Spider-Man, who looks more like a variant of The Shadow than a Spider-Man, and John Mulaney’s Spider-Ham, a Porky Pig-like cartoon character with an embellishment of giant Looney-toon mallets and pratfalls; each character inhabits a different style within the larger canvas of the film, and the animation department pulls out some amazingly clever stops to make it all work together. Even the villains, from Schreiber’s impossibly behemoth-like Kingpin, to Hahn’s gender-swapped Doc Oc, to the utterly terrifying Prowler, who is always accompanied on-screen with a deep, malevolent synthesised siren call (based on elephant roars, if you can believe it), manifest true individuality in a film that would otherwise be an absolute mess of ideas. Clashing visual signatures in such a way would normally be a disaster on the screen, but Into The Spider-Verse makes it all work perfectly, jarring the audience into watching what’s going on thanks to an on-screen frisson of something new. 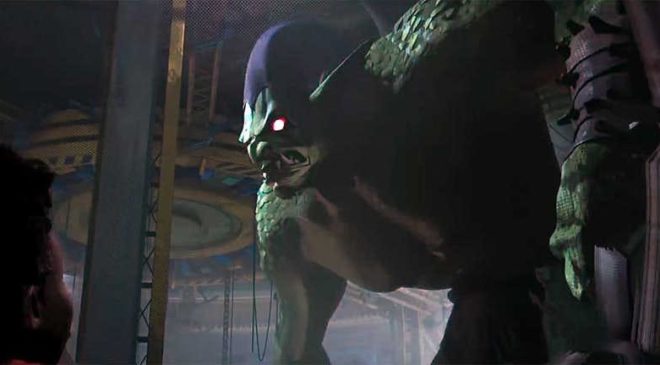 For casual fans, Into The Spider-Verse is a great time with characters new and old, but for hard-core comic fans, the film represents an absolute orgy of references and tips-of-the-hat to Spider-lore and history. Even I, a long-time comic reader, probably didn’t get them all (I’m not that deep into Spider-Man but I know enough to understand about 90% of the material here) and I would imagine the inevitable freeze-frame brigade will pull out more blink-and-miss moments that the filmmakers have inserted into the movie. Having filmmakers as talented as Phil Lord and Chris Miller overseeing the project (they did not direct, having spent this film’s production time working on their aborted version of Solo: A Star Wars Story instead) is simply the cream on already overstuffed cake of wonderfulness, a comic-book lovers wet-dream of cues and tidbits, from fan favourite Spider-Gwen to early-credit callbacks to Raimi’s trilogy – stay tuned through the movie for one of the best post-credit scenes I’ve ever witnessed, I nearly busted a gut laughing so hard – this film is packed to the gills with all manner of Spider-Man history and references. The film’s continued idea that comic books are “real”, and that Spider-Man’s adventures in “real life” translate to the page, and that the film pretends to be a comic book itself, is a clever enough aesthetic for any movie, but here the trio of directors, Bob Persichetti, Peter Ramsey and Rodney Rothman, push the very boundaries of cinema with this utterly fresh take on not just Spider-Man but animated movies overall. You won’t likely see Pixar or Disney achieve something like this, and it’s credit to the entire production team that Spider-Man: Into The Spider-Verse looks as spectacularly off-the-wall as it does. A climactic fight sequence (no spoilers) between Miles, Kingpin and an alternative Peter Parker Spider-Man makes that folding-warping New York sequence in Doctor Strange look like a poor copy of an Escher sketch, barely contained by the cinema screen it appears on. 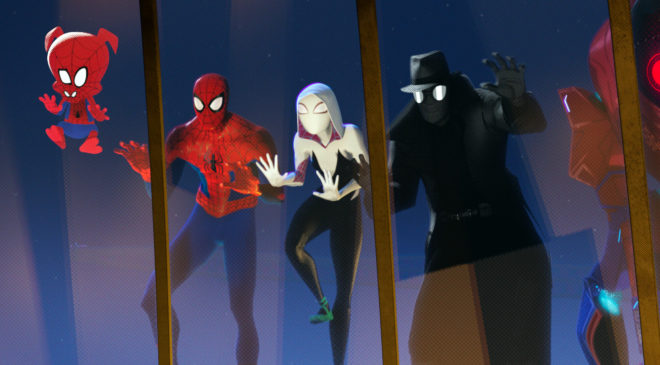 Self-aware, self-referential, hip and utterly modern, Spider-Man: Into The Spider-Verse is a masterpiece of animated exuberance and a dazzling rebirth for a character so many people have affection for. While Sony’s live-action attempts in recent years have been lamented by hardcore fans and critics alike, if they pursue this animated line they’ll guarantee box-office success. Into The Spider-Verse is a deliciously clever, insanely visual animated treat, a must-have for Spider-fans and a must-see for everyone. Arguably the year’s best animated film.

2 thoughts on “Movie Review – Spider-Man: Into The Spider-Verse”