Principal Cast : Kristoffer Joner, Ana Dahl Torp, Jonas Hoff Oftebro, Edith Haagenrud-Sandie, Hang Tran,
Synopsis: In 1904 an earthquake of magnitude 5.4 on the Richter scale shook Oslo, with an epicenter in the “Oslo Graben” which runs under the Norwegian capital. There are now signs that indicate that we can expect a major future earthquake in Oslo.

It’s the kind of film that begs the question: how can the same shit happen to the same family twice? Roar Uthuag’s 2015 Norwegian thriller The Wave delighted genre audiences with its grand scale Emmerich-styled destruction and the plight of a central family – led by Kristoffer Joner – so when a similarly spectacular disaster film was announced as a sequel I was intrigued, if not outright excited. Although Uthuag decided not to return to helm The Quake (Skjelvet in its native Norway), the four original cast from The Wave return to take on the Earth’s most dangerous and proliferate natural disaster, the earthquake. Which, yes, puts our poor traumatised heroes back into harms way again. Like its progenitor, The Quake offers a far more character-driven affair than Hollywood’s effect-driven blockbusters can muster, but when it needs to deliver, John Andreas Andersen’s big-budget destructo-fest ramps up the carnage. 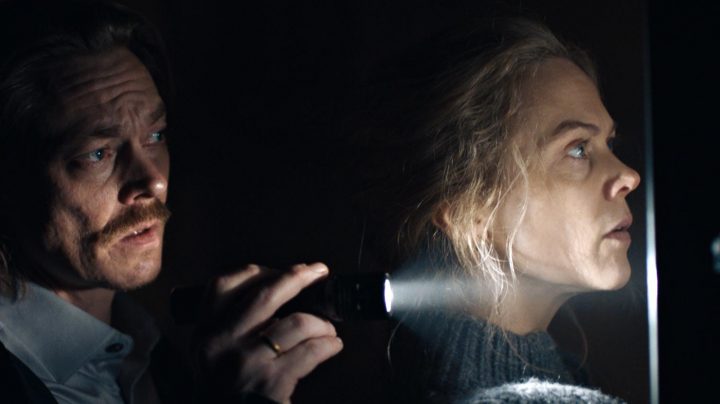 It’s been several years since Kristian (Joner) and his family survived the tsunami that wiped out the small town of Geiranger, in Norway. Although acclaimed as a hero, Kristian suffers from post traumatic stress, and he and his wife, Idun (Anna Dahl Torp) have amicably separated, sharing custody of their children, son Sondre (Jonas Hoff Oftebro) and daughter Julia (Edith Haagenrud-Sandie). After one of his former colleagues is killed in an accident beneath a city tunnel, Kristian soon becomes concerned that another natural disaster is about to befall the nation, an enormous Earthquake similar to the one that decimated the city back in 1904. Of course, nobody believes him and when disaster strikes Kristian must use all his ingenuity to save his family. 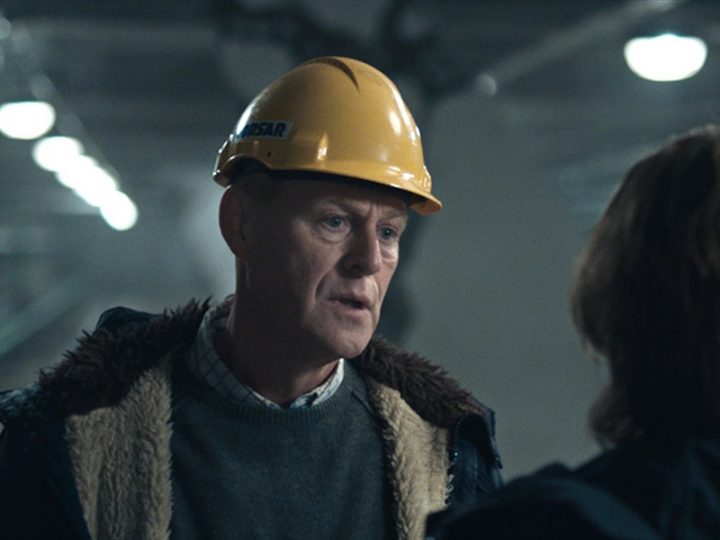 The Quake is a film that ought not to be a disaster movie. For most of its 2-hour runtime, The Quake is an elegant study in loss, grief, and the rising fear of something ominous, a character piece in which Kristoffer Joner delivers a solid, compelling performance as a man struggling with the guilt of his perceived inadequacies from the previous film. The fear of being thought utterly crazy when he starts claiming there’s a quake on the way to Oslo, is the central tenet to the film’s uneasy tension, with Kristian’s unsettling prejudicial fear of future disasters (he’s a geologist, remember, so he knows the Earth, which means quakes are right up his alley) furthering the audience’s expectations of imminent eruption. Sadly – or perhaps masterfully – director Anderson keeps the bombast largely for the final climactic act, effectively blue-balling an audience hoping for San Andreas-level carnage. 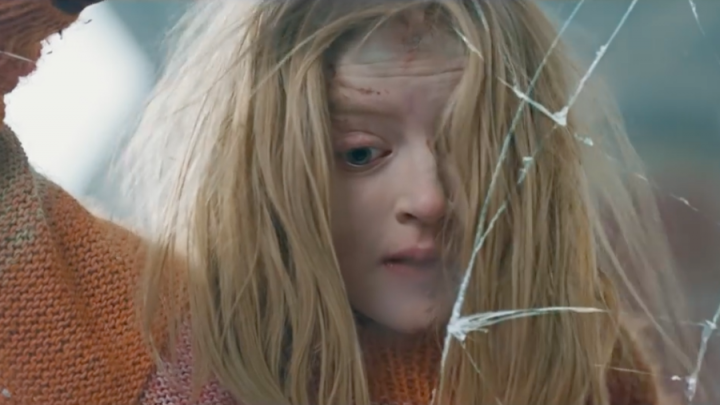 In keeping with any and every great disaster movie, The Quake follows a predictable dot-point list of tropes before plunging us into its cataclysmic endgame. A tortured hero, realising he may be the only one to know about some impending calamity, unlocks a variety of clues in order to confirm his distrust of the plot, engaging with former friends/family before achieving the Holy Grail of “I farking told you so!” moments as shit goes down: The Quake isn’t a story of unique or refreshing plot, but it does generate intrigue with our lust for structural capitulation. First, it’s to the screen room of informative exposition, where some science dude explains that they have developed a heck of an earthquake warning system that’s (cue Titanic) practically infallible. Then, the power goes on and off, and then there’s tremors and other triggers suggesting a massive quake is on the way. Through it all, Kristian’s exhortations continue to fall on disbelieving ears. Because reasons. And of course, his family find themselves in obviously eye-rolling situations of immediate peril. 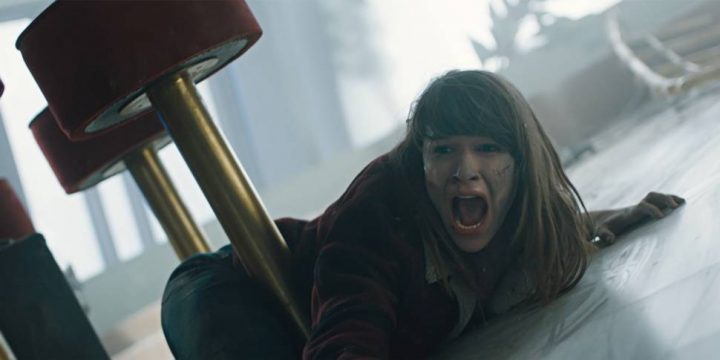 Written by John Kåre Raake and Harald Rosenløw-Eeg, the same pair behind The Wave, the film is at times ponderous and solemn, and at others legitimately frightening. Earthquakes drive a primal human fear, an uncontrollable event that nominally kills many and destroys almost everything. This forms the basis for a lot of The Quake’s pontificating examinations of survival and senseless reason. It’s a slow-moving piece, this one, and if I was a betting man I would suggest the lethargic pace may put many people off, but for me, the gradated method of narrative tension is a far more luxurious one. The characters are well developed, specifically Kristian and Idun, whose relationship has strained against the events of the previous film, while new actress Katherine Thorborg Johansen, as Marit, the daughter of Kristian’s deceased colleague, provides our “in” as unwitting observes to the unfolding tragedy. Her bafflement and confusion provides a way for Kristian to contextualise the disaster so we can all understand it.

In the end, though, we all just want to see shit wrecked. And boy, The Quake wrecks some shit. Death and destruction come to all as terror gives way to the realisation that “it’s not oooover” and survival becomes the mandate. Kristian and Idun are trapped in an elevator inside the new hotel Idun works at, Julia, Marit and a wounded concierge are trapped several floors above in the collapsing building, while Sondre and his girlfriend are stuck at the city’s university. It gets dusty, it gets bloody, it gets stark-raving cliched. Thunderous sound design and Andersen’s widescreen framing and generally restrained camerawork, coupled with solid production design put our heroes in harms way and then some, while the visual effects used to bring Oslo’s new-ass-tearing are as good as anything Hollywood has yet produced, albeit on a smaller scale. The film mixes a little bit of every disaster film to precede it, in terms of near-misses and action set pieces, from the collapsing tilting building routine and the structural destruction wreaking havoc on the poor souls beneath them, to the monumental carnage wrought on the city’s surrounds. The film gives us some significant losses too, unafraid to really shatter audiences expectations of just who might survive, so prepare yourself for some genuine shocks. 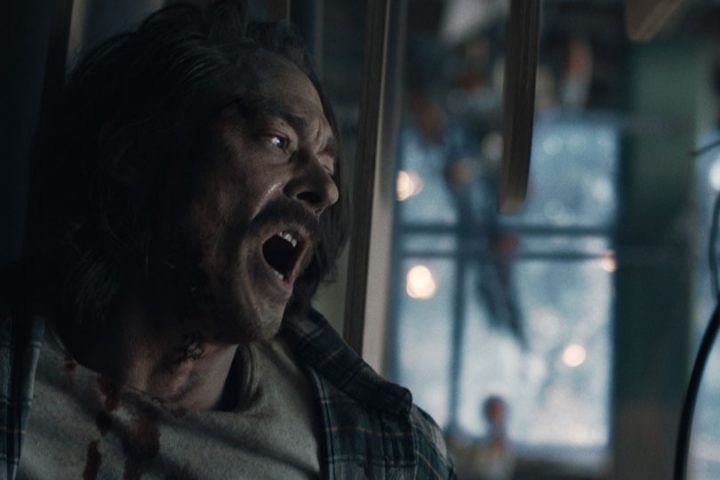 The Quake is a slow-burn disaster film that works on a number of levels, from its relative intelligence to its popcorn-munching genre thrills. It’s a jigsaw of cliches and more than a few moments of predictable convenience but the heart of the film – Kristoffer Joner’s captivating performance holds the film together when it threatens to blow apart – is its emotional core, with legitimately moving moments of catharsis for our main characters. An emotional disaster film? I’m not sure I signed up for it, but The Quake makes it work and delivers a more complex thrill ride than I expected initially. Delightfully climactic and altogether engaging, The Quake is a worthy successor to The Wave and I, for one, can’t wait for the next film, which will no doubt involve a bloody volcano in the middle of a rebuilt Oslo some years from now.