Director :  Brad Peyton
Year Of Release :  2015
Principal Cast :  Dwayne Johnson, Carla Gugino, Alexanrda Daddario, Paul Giamatti, Ioan Gruffudd, Archie Panjab, Hugo Johnstone-Burt, Art Parkinson, Will Yun Lee, Kylie Minogue, Colton Haynes, Todd Williams, Matt Gerald.
Approx Running Time :   117 Minutes
Synopsis: In the aftermath of a massive earthquake in California, a rescue-chopper pilot makes a dangerous journey across the state in order to rescue his daughter.
What we think :  As unkempt as the story and characters are in this by-the-numbers destruction film, charismatic leading performances by Dwayne Johnson and Alexandra Daddario make this an Event Film that delivers its spectacular visuals with only minor problems in the human beings living through it. It’s fast, silly quake mumbo-jumbo that spends loads of cash on its CG effects, and virtually nothing on characters we truly invest in. In all, a fun but forgettable time at the movies.

It’s not The Rock’s fault.

It’s doubtful anybody loves a good disaster film as much as I. Armageddon, 2012, The Towering Inferno, Earthquake – all-round popcorn-chewing destructo-porn that normally rocks my world and the genre I return to when life’s kicking me in the balls. Fantasy writ large, the kind of thing blockbuster cinema is designed for (along with superheroes punching on, yes), San Andreas is a film that taps right into the stupid centers of my brain and makes me want to see it. Combine Dwayne Johnson (yeah, I still have issues with that name, because I’d much rather he go by The Rock, because it sounds cooler than “Dwayne”), two of the most attractive women in the industry today, and the destruction of most of the West Coast of America, and I’m in a seat. Buck down, Coke chugging, brain-in-neutral entertainment that tests a cinema subwoofer and thrills the same way a rollercoaster does at a theme park. So what’s the result of this earthquake-centric flick; does it split itself open and fail to capture the imagination? Or does it find its shaking feet firmly in the “silly but fun” region that will keep it on high rotation at my place for years to come? 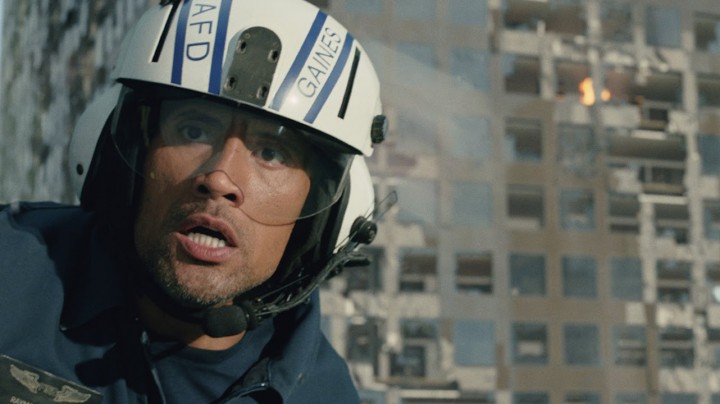 Ol’ Dwayne plays Chief Ray Grimes, an ex-special ops soldier now working helicopter rescue out of the Los Angeles fire department. While dealing with his ex-wife (Carla Gugino), who’s about to marry a filthy rich businessman (Ioan Gruffudd) and take their daughter Blake (Alexandra Daddario) with her, the San Andreas fault begins to rupture, causing increasingly powerful earthquakes up and down the West Coast of the US. With collapsing buildings and devastated infrastructure, Grimes must race back across the state to rescue his daughter and former wife.

Admittedly, a director whose claim to fame is the odious Cats & Dogs sequel and the Journey 2 sequel (the latter of which also starred Johnson, by the by) isn’t perhaps the first ticket you’d have for a film of such cataclysmic destruction; Brad Peyton’s prior work indicated a director who could no doubt be told what to do without argument by the studio, which is perhaps the chief reason he was hired in the first place. Peyton’s ability to carve a story and characters amidst San Andreas’ admittedly beautifully rendered destruction is somewhat…. limited, but as generic as the cast’s roles are, he imbues the tension and terror of an earth-shattering quake with enough jaw-dropping spectacle and wry humor to make things work well enough to succeed. He’s no Michael Bay, but it’s okay to a point.

The Rock, I mean, Dwayne Johnson is fast becoming the go-to guy I love to watch in these big blockbuster films, with his big-ass grin, hulking physique, and natural screen chemistry making him one of the preeminent action stars of the modern era. Although sojourns into drama, such as Snitch, have led to little commercial success, his forays into outright popcorn entertainment have made an impression on audiences. He can headline a film like this with his eyes shut – last year’s Hercules, although a bit of a soggy biscuit in terms of character, was still an enjoyable romp – and the camera here just loves him. His character, Ray Grimes, is a square-jawed all-American guy, heroic to a fault and as far as the audience is concerned, without flaw. The fact his wife left him apparently doesn’t register like it should. Anyway, Johnston sells every moment he’s on the screen as if it were real, so all kudos to him for making this film as fun as it is. 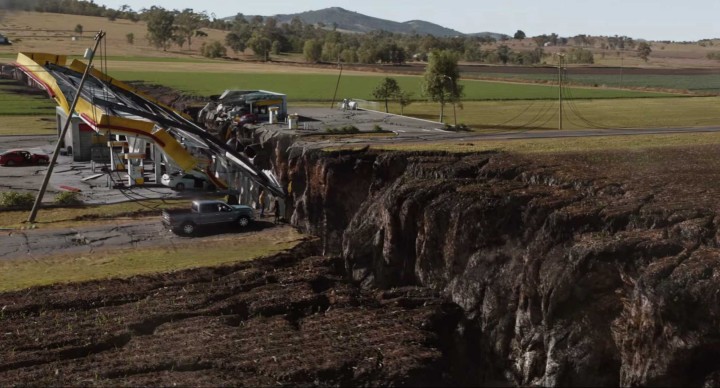 He’s ably abetted by female co-stars Carla Gugino, as Emma, and Alexandra Daddario (who wowed everyone with her revealing scenes in True Detective’s first season) as his daughter Blake. Neither role is particularly nourishing from an emotional or narrative point of view – the women are merely humanized GPS coordinates for the Rock to get to where he needs to be – but neither are they dumb “helpless maiden” cliches, either. Daddario gets to use her own skills in a key moment of the film, which is pleasing. Paul Giamatti represents Mr Exposition, the resident quake expert who tells us what we need to do to keep us up to speed with not only quake dynamics, but the effects one can cause. It’s a role he plays well, even if it’s hardly a stretch for the actor. And you get the sense that only he can look so po-faced when asked who they should call, and he says “everyone” with the seriousness of a doctor delivering a cancer diagnosis. Ioan Gruffudd has the thankless task of being the film’s resident human bad guy, and central competition for The Rock’s attention on Emma. Gruffudd makes a good fist of it, but the role is a nothing and he deserved better.

Where you could easily say the characters are all pretty basic, a film like San Andreas revolves entirely around its gargantuan visual effects. Disposable emotions notwithstanding, San Andreas‘ widescreen destruction evokes memories of recent real-world events that have caused massive death tolls (nothing like this film depicts, but still) and I can’t help but wonder if the film deliberately tries to avoid memorializing them to further its own sense of fantasy here. The Hoover Dam’s destruction, the sequence which opens the quake-porn scorecard, is handled with almost perfunctory deliberateness by Peyton, almost as if he’s holding something back for later (hint, he is), and much of the destruction’s impact on the country, on the fabric of society, is glossed over to focus on our main characters. But when San Andreas takes off, man does it take off. 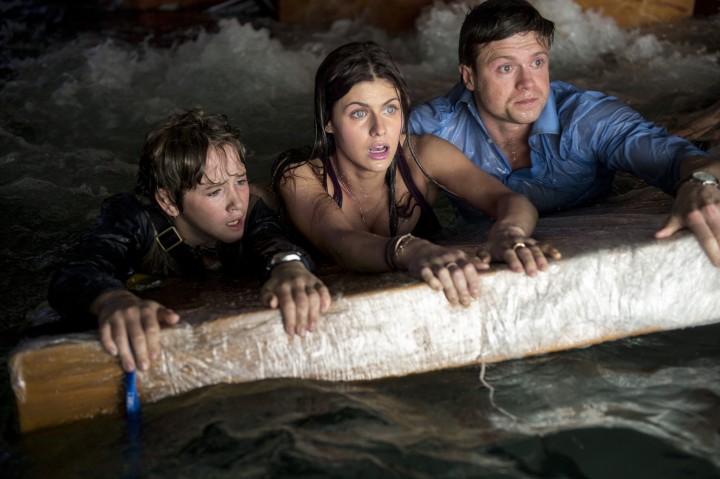 Part of the fun of Hollywood escapism has long been built on coincidence. Characters intersecting at key moments, plot contrivances allowing time and space to be traversed relatively easily – as someone once said, films are like life with the boring bits cut out – but occasionally San Andreas does stretch the limits of audience buy-in to some of the goings-on here. As characters bisect and Grimes’ rescue operations kick into gear late in the movie, the film’s treatment of the major quake as a living thing chasing people down to kill them does border on stupid. But only barely. Generally, San Andreas has plenty of great action sequences involving the quake-disaster that make these films so utterly fantastic. It’s just amazing how many buildings can collapse in slow motion, while the human people run screaming at full speed in the foreground. Not to mention Peyton’s blatant ripping off of Roland Emmerich’s patented “collapsing building flythough” shot, repeated numerous times here.

Blessedly, the film wastes little time with setting things up before it unleashes the carnage. If you’re into rollercoaster rides that offer cheap thrills by going fast and upside down, you’ll have a blast with San Andreas. It’s an undemanding action flick that offers plenty of destruction, some ripping sound design and the Rock doing what the Rock does best. It doesn’t tax the brain cells, nor will it require much afterthought to appreciate on any level, San Andreas‘ shallow-pool characters and fairly bog-standard rescue-his-family plot make it a hands-in-the-air theme park ride you’ll want to take once at least. Possibly not twice. But definitely once.