Note: Some spoilers within. Your mission, should you choose to accept it, is to read on anyways….

The longer it has progressed, the more dangerous and thrill-seeking the Mission Impossible franchise has become. Star Tom Cruise, now approaching his late-50’s and looking as fit as ever for this, the sixth instalment in this ever-popular spy property, continues to defy the ageing process and deliver done-for-real stunts that almost every other Hollywood star would baulk at: in Ghost Protocol, Cruise strapped himself to the external glass panels of the world’s tallest building in Dubai. In Rogue Nation, he strapped himself to the outside of a cargo plane as it took off. Not to mention exerting himself physically in all manner of high-octane stunts – driving, climbing, diving, swimming, fighting; there’s almost nothing Cruise will not do to satisfy his desire to deliver a genuinely exciting time at the movies. With Fallout, Cruise has once again gone above and beyond in the name of entertainment, and what glorious entertainment it is. 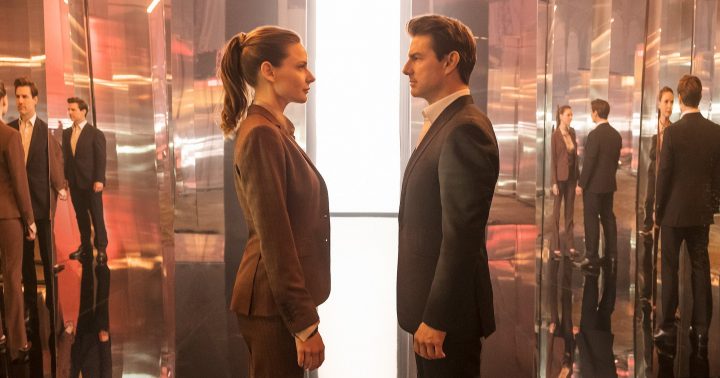 IMF Agent Ethan Hunt (Cruise) is on the trail of a terrorist group known as The Apostles, a splinter group formed following the destruction of The Syndicate (as told in Rogue Nation). He is tracking three plutonium cores, capable of being used to manufacture a nuclear weapon, to an unknown man only going by the alias John Lark. Hunt and his team track down the cores to Berlin, where he and his team – including Benji Dunn (Simon Pegg) and Luther Stickell (Ving Rhames) – fail to accomplish their mission. His superior, IMF Secretary Alan Hunley (Alec Baldwin) is usurped by new CIA Director Erica Sloane (Angela Bassett), who tasks her own special agent, August Walker (Henry Cavill) with accompanying Hunt on their mission to extract former Syndicate mastermind Solomon Lane (Sean Harris), who has the information needed to prevent global catastrophe. As the pursuit continues, Hunt also encounters former associate Ilsa Faust (Rebecca Ferguson), who is on a mission of her own, as well as the mysterious White Widow (Vanessa Kirby), a woman with her own agenda in obtaining Solomon Lane. 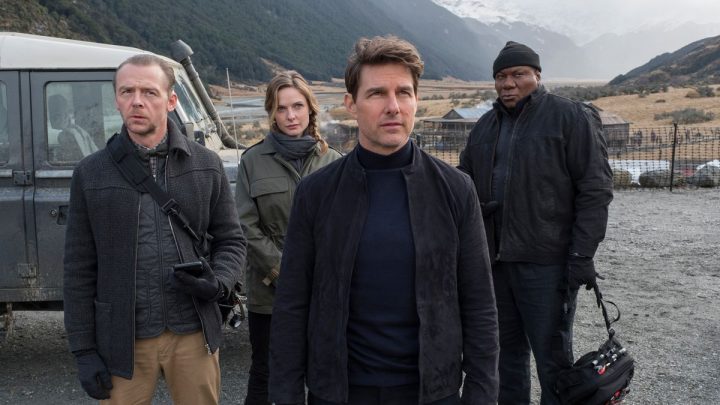 Mission Impossible: Fallout is sold on the promise of Tom Cruise doing all his own stunt-work and doing it for realsies. In Fallout, he performs an actual HALO jump, flies a helicopter through canyons in  the disputed region of Kashmir, drives at breakneck speed through the streets of Paris (as well as riding a motorcycle, in one exhilarating sequence), and most famously breaking his ankle performing a rooftop chase (which ended up in the dang film!) all to bring a sense of realism to the movie’s energetic pacing and emotionally dexterous catharsis. Ethan Hunt hasn’t always been the most emotionally penetrable character, not the least other than superficially, and it pleased me to see that Fallout accomplished something the franchise hasn’t yet managed: making Ethan Hunt a fully realised human being. 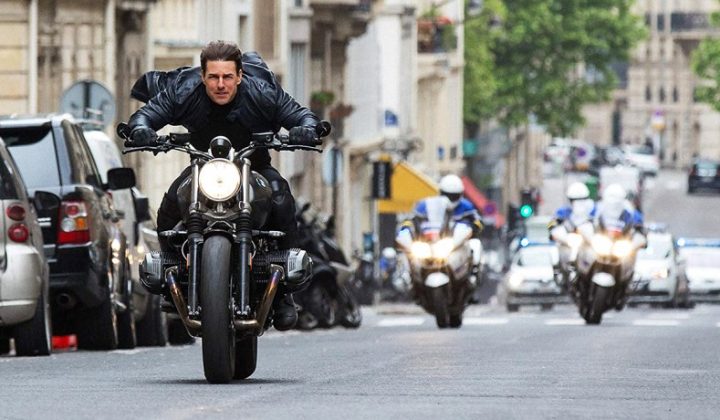 Scripted by the director, Christopher McQuarrie, Fallout brings a sense of patriotic heroism to Hunt’s globetrotting adventures. Fallout also brings back Michelle Monaghan from MI3, as Hunt’s (now ex) wife, Julia, and allows us a momentary glimpse at Hunt’s humanity and sense of duty in a way the franchise hasn’t quite allowed, and it’s wonderful. Instead of being an out-and-out superhero, Fallout humanises the character to a point where you almost kinda see the cracks in his facade show up towards the end. Hunt is physically bruised, beaten and broken throughout, but nothing brings more weight to the story than the sense of emotional jeopardy he endures when Julia shows up in a crucial climactic sequence. Cruise allows himself the opportunity to showcase a more gritty Ethan Hunt, a man who doesn’t always have all the answers and, as established in the previous two films at least, needs his team around him to succeed. 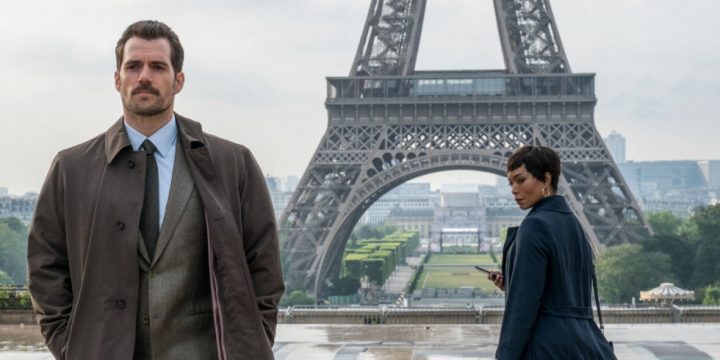 The ensemble work on Fallout is excellent, the cast performing their required tasks with panache and style. Co-star Henry Cavill, as the film’s is-he-or-isn’t-he antagonist to Hunt’s steadfast superspy, delivers a menacing and thuggish role in Walker, and more than brings the heat opposite the main players here. Pegg and Rhames provide the more lighthearted touches to the story – although a scene involving Rhames and Rebecca Ferguson’s Ilsa in which the former recounts Hunt’s sense of priority for why he does what he does, is an astonishingly well crafted moment of deep drama in a blockbuster action flick – even though in saying that Fallout is never a laugh riot. The delicate balance between pathos and humour veers further into sidebar laughs than any genuine levity. Black humour also plays a part at times, the utter ridiculousness of Hunt’s city-wide antics not lost on either his team or the viewer. Sean Harris’ searing-eyed creepiness manifests again as Solomon Lane, and whereas the character had a pretty front-and-center role in Rogue Nation, here he plays the film’s MacGuffin: everyone wants him, will stop at nothing to get him, and as usual he has his own plans for world decimation and revenge on Ethan Hunt. 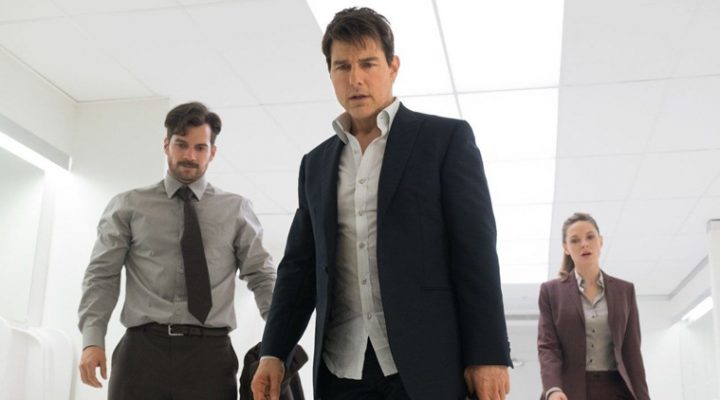 As he did with Rogue Nation, Christopher McQuarrie gives Fallout a sense of purpose and pizzazz few action films can carry with such expositional demands. The film is paced like a freight train: once is starts moving is rarely pauses for breath, and the staging of the action sequences (as well as their editing and accompanying sound and music editing) are masterfully handled. The streets of Paris haven’t seen a chase sequence like this since Frankenheimer’s Ronin, the skies haven’t seen a helicopter combat sequence since… well, ever, and the hold-your-breath HALO jump Cruise engages in over the Parisian skyline is remarkable for its intensity and urgency. Cruise is game enough to try anything and the film is the better for it – he throws himself into the fray (a bruising threesome fight sequence inside a men’s restroom is brutally raw) and as a viewer you can really see him going for it. McQuarrie’s camera accomplishes some spectacular feats of physics to bring this all to the screen for us, perhaps the most electrifying is a dual-narrative between Cruise and Cavill in a helicopter chase, and Ferguson, Pegg and Harris having a knock-down drag-out fight to the death inside a wooden house, which ratchets up both the ticking-clock countdown finale and the who-will-make-it-out-alive sense of dread the sequence demands. You’ll go a long way to see a film so filled with action as Fallout, and you’ll almost never see it bettered for execution. 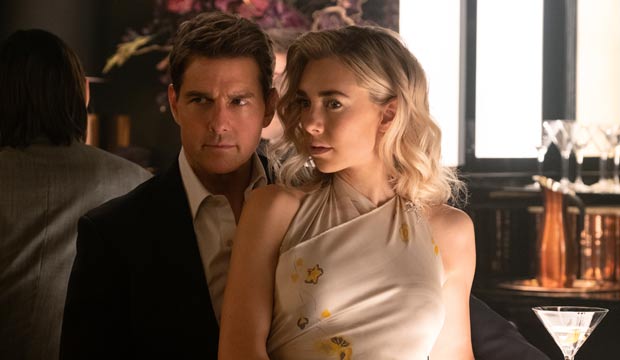 It’s a cliche for film reviewers to suggest that the latest film in an ongoing franchise is “the best one yet” – the Marvel films suffer this indignity annually – but compared to at least the previous two entries (which match Fallout tonally) then this entry is the best yet. High octane stunts and McQuarrie’s delightfully punchy direction, coupled with Cruise’s continued commitment to his most famous role, make Fallout a contender for the premier action film of 2018 and one of the most all-round enjoyable blasts of fun in cinemas in the last decade. Exhilarating set-pieces, superb technical merits – cinematography here by Rob Hardy and the blasting score by Lorne Balfe, not to mention Eddie Hamilton’s furious editing all deserve consideration for Oscars, they’re that good! – and a halfway decent central premise make Fallout a heck of a great movie. It’s rare a genre film can feel like a legitimate work of art to savour but Fallout achieves this easily. Emotionally cogent and nailbitingly tense, Mission Impossible: Fallout is superb.