Aside from being one of the nicest guys working in Hollywood, former wrestling superstar turned actor Dwayne “The Rock” Johnson is fast becoming the busiest, involved not only in hugely successful franchise instalments (Fate Of The Furious) but also enormously profitable stand-alone projects (Jumanji, the soon-to-be-released Skyscraper, Baywatch) as well as innumerable television and promotional activities. As bankable a star as the post-millennial age has given us, Johnson’s charismatic screen persona flexes its considerable muscle re-teaming with San Andreas helmer Brad Peyton for Rampage, a big-budget computer-game based destructo-fest that gorges itself on scientific gobbledygook and insane preposterousness and comes up trumps.

Johnson plays primatologist Davis Okoye, who works as a Colorado nature preserve and monitors resident albino gorilla George. After George is infected with a genetic pathogen that makes him both physically larger and animalistic, Davis, together with the pathogen’s inventor Dr Kate Caldwell (Naomie Harris – Skyfall) tracks George to Chicago, where two other giant genetically modified creatures wreak havoc through the city; the pathogen’s owner, corporate CEO Claire Wyden (Malin Ackerman – Watchmen) is intent on selling the technology for enormous profit as a military grade weapon, if only they can control it. Also standing in their way is government agent Harvey Russell (Jeffrey Dean Morgan – Watchmen, The Walking Dead), who hopes to utilise the situation for his own mysterious ends.

The film plays a lot like a Jurassic Park-meets-Godzilla riff, using the well-trod path of genetic tampering to weave a confused story of militarisation of enhanced animals (although for what purpose, I’m still not entirely sure, because the villains’ motivations are never made explicitly clear) and the use of modern day landmarks as wallpaper for the destructive path we’re led on make for enthralling spectacle viewing, if not the smartest. Brad Peyton is smart enough to play up the reason for your ticket, and he parlays the brief setup and character development into what equates for a rollercoaster ride of tumultuous exuberance. Rampage will sit comfortably alongside similarly mindless fare as Pacific Rim: Uprising, Geostorm and The Hurricane Heist for willing audiences who don’t mind generic, hokey B-movie material. 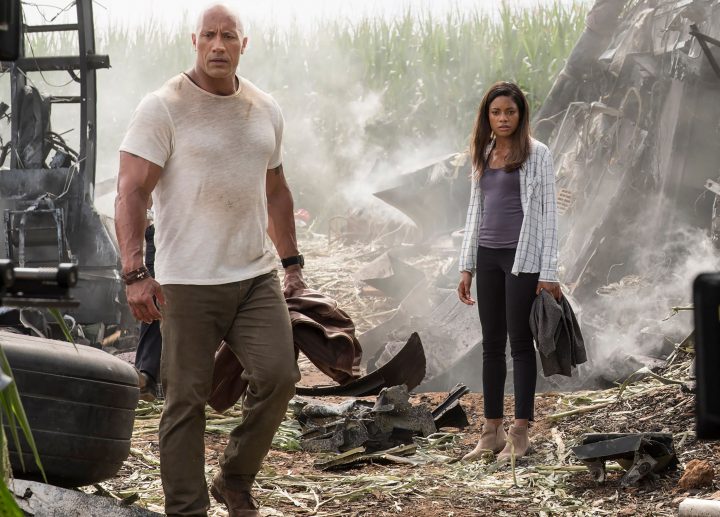 Rampage wants little for subtlety; it’s loud, bloody loud, and damn loud. The premise of enormous genetically enhanced animals let loose upon a major American city forms the basis for the 80’s arcade games and hell if it doesn’t translate to the easiest popcorn munching experience you’ll have all year. Similar to what Michael Bay did in Transformers: Dark of The Moon, Peyton’s Rampage virtually levels Chicago in the most obscenely gleeful manner he can muster – and he musters well. Rampage is pure cheese cinema, junk-food calories of pixels and digital artifice and full scale widescreen destruction that delights in its own silliness and never once pauses for logic or reason. Sometimes, that’s exactly what we need. Scene chewing performances by Johnson and Morgan, terrible ones from Ackerman and Jake Lacy (as Claire’s halfwitted brother) and solid exposition from Naomie Harris give the film’s flimsy premise and actuality a motivation, but you’re not here for that.

No, you’re here for the monsters. Bless them, both Johnson and Peyton deliver crowd-pleasing moments of stupid-humour and fun amidst the cascade of explosions and infrastructure damage. Buildings topple, the US military is well and truly trounced, and both logic and physics take a back-seat to the utterly insane idea of Johnson’s character can survive being shot in the actual stomach and still walk around. Look, it’s utterly implausible, a film designed purely for that roll-the-eyes, check-your-brain-at-the-door type experience, and at no point would I recommend throwing any kind of critical thinking this movie’s way, because it simply won’t stand up. Take that for what it is, and you’ll have a decent time. I did.