The 1992 comic book storyline detailing Superman’s ultimate sacrifice defending Metropolis has been adapted in animated form before, including at the conclusion of Batman Vs Superman but more specifically 2007’s Superman: Doomsday, which kinda-sorta deviated from comic lore and as a result never quite achieved the desired result. The original comic story was monumental for both DC and the industry as a whole, not just for the avalanche of speculative buying by non-fans but the inevitable mining of similar “event” narratives other companies would imitate in the years afterwards, all of which saw a retraction of value for all involved. DC’s animation arm, which has produced steadily consistent comic-themed films for years now has recrafted the now famous story, which pits the franchise’s most powerful heavy hitter against his fearsome nemesis in a showdown that sees much of Metropolis reduced to rubble. 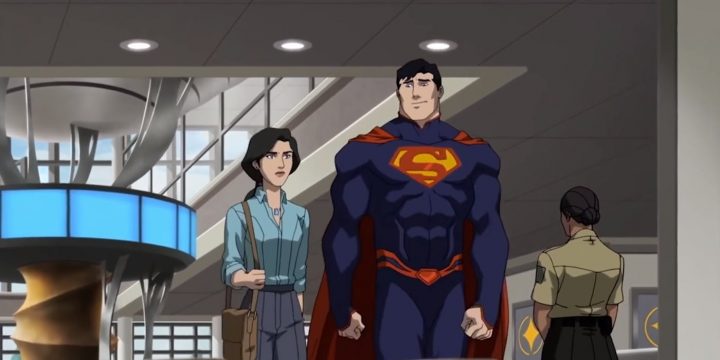 Clark Kent (Jerry O’Connell) is struggling with the secret of his true identity as Metropolis’ caped champion, Superman. His girlfriend Lois Lane (Rebecca Romijn) is inexplicably unaware the bespectacled newspaper reporter is in reality the Man of Steel, although Clark is weighing up revealing such a large secret to her. Meanwhile, across the country, an asteroid crashes to Earth unleashing an indestructible alien creature, Doomsday, which proceeds to devastate the land and people around it as it approaches the city. The Justice League – led by Batman (Jason O’Mara), Green Lantern (Nathan Fillion) and Wonder Woman (Rosario Dawson), and including Cyborg (Shemar Moore), the Flash (Christopher Gorham) and Aquaman (Matt Lanter), are easily defeated by Doomsday, who arrives in Metropolis and proceeds to go toe-to-toe with Superman. The destruction they cause is enormous, with Superman taken to the absolute limit by the unstoppable beast, leaving arch-nemsis Lex Luthor (Rainn Wilson) to postulate what might happen if the Man of Steel is actually defeated. 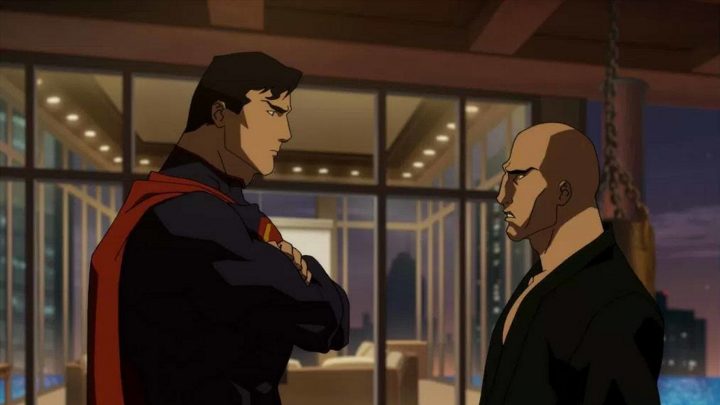 The Death Of Superman is a film that remains as true to the original story as is practical for a 90 minute animated film. The comics arc has numerous memorable moments and sidebar characters, as well as having to balance ongoing subplots within continuity at the time it was originally printed. Amalgamating much of these as possible yet still remaining true to the story’s heart, the film’s screenplay – by legendary comic book scribe Peter J Tomasi – hits the most famous beats of the ’92 story, yet feeling fresh and relatively compelling despite some minor issues. The inclusion of rundown sailor turned restaurateur Bibbo Bibowski (Charles Halford) is expected yet resolutely awkward, given my belief he’s one ancillary Superman character I could live without, and the original story’s use of Booster Gold, Blue Beetle and a third-tier Justice League outfit is jettisoned in favour of DC’s heavy hitters like Batman, Wonder Woman, and Green Lantern. 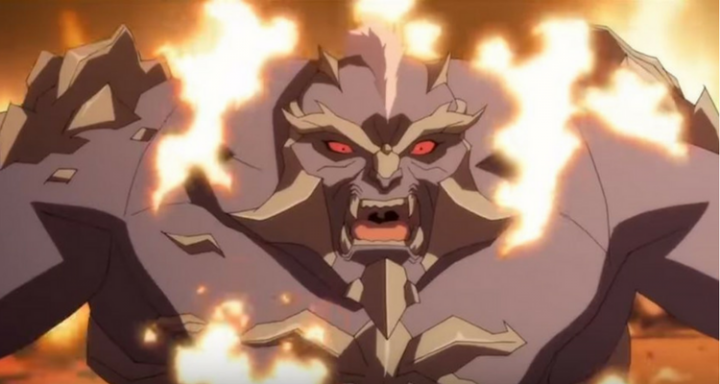 Based on the recently defunct New 52 comics version of DC’s aesthetic, Tomasi’s script works in a number of Superman tropes, especially “the reveal” of Superman’s identity to the woman he loves (nawwwww) but it skips over more important elements (such as Clark’s relationship with his adoptive parents, voiced by Paul Eiding and Jennifer Hale) as it strives to balance introducing several characters who’ll come to prominence in the sequel (to release in 2019), namely Hank Henshaw (Patrick Fabian), the nascent Superboy, John Henry Irons (Cress Williams) and the being known as the Eradicator. It’s a delicate balancing act but one I think Tomasi achieves well, inserting genuinely cool Super-moments to contrast against the plot development. Lex Luthor’s insane hatred of Superman isn’t so much introduced here as it is simply already in-play, while the Daily Planet staff – Perry White and Jimmy Olsen in particular – are given exceptionally short thrift. Instead, Cat Grant’s gossip-mongering journalist is forced to endure inane banter with Lois Lane to propel the “character development” between Lois and Clark, and this stuff didn’t work well for me. 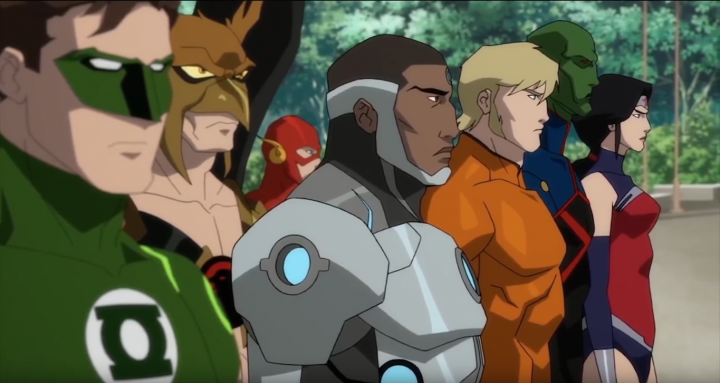 I admit to not having seen the vast majority of the DC animated fare over the last several years (in fact, I think the last one I did catch was Superman: Doomsday, apropos of nothing) and I was surprised at how violent it really is. Doomsday is a creature of abhorrent carnage and here we see dismembered bodies, blood-soaked water and all manner of viciousness both overt and subtle in the film’s visual style; my young son squealed whenever Flash or Superman appeared on screen to save the day, but I kept having to soften the bloodier moments the film contained which concerned me as a parent. Folks with younger kids should be aware the film isn’t suitable for very young children. 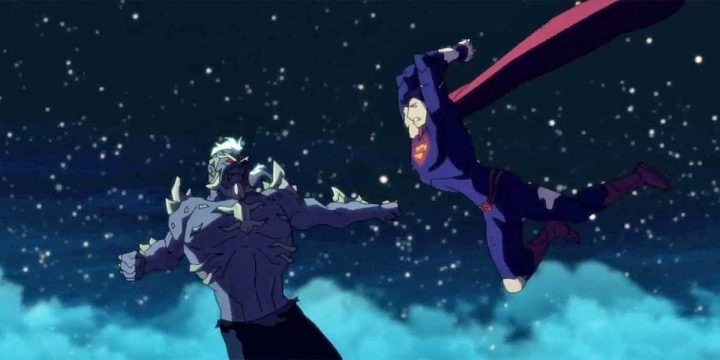 The action sequences are suspenseful and masterfully animated, designed with the full flavour of comic-book splash pages and delivering widescreen destruction. Superman’s powerset is shown off in a number of ways, borrowing from Zack Snyder’s “natural” projection of heat vision, Superman’s supersonic speed, and the man’s heroism and upright moral nature comes across readily. About the only real concern I had was the size of Superman’s S-shield, which looked far too small for my liking and something I hope is rectified in the character’s eventual return in next year’s part two. Yes, Superman’s death is foregone, given the film’s title, and the movie connects in with the comics’ “World Without A Superman” storyline’s opening gambit with far more success than any previous adaption. Again, some shortcuts are taken in the name of dramatic expediency between the translation from printed page to animated film, but for the very few issues I had with it there are far more numerous pleasant surprises. 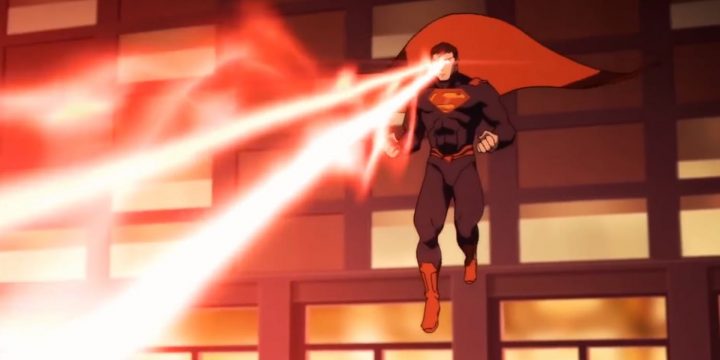 The Death Of Superman feels a far more cohesive, emotionally compelling version of the story that has been done before in any video adaption since 1992. The voice cast are all solid without being particularly memorable (O’Connell’s Superman/Clark persona is amenable but hardly iconic) and the animation style has a certain kick to it that made both me and my son startle from time to time. Brute force superheroics are often best served by animation, as a far more flexible storytelling palette (certainly a less expensive one) to deliver the massive destructive antics inherent in the genre, and The Death of Superman delivers about the best iteration of this story to-date.