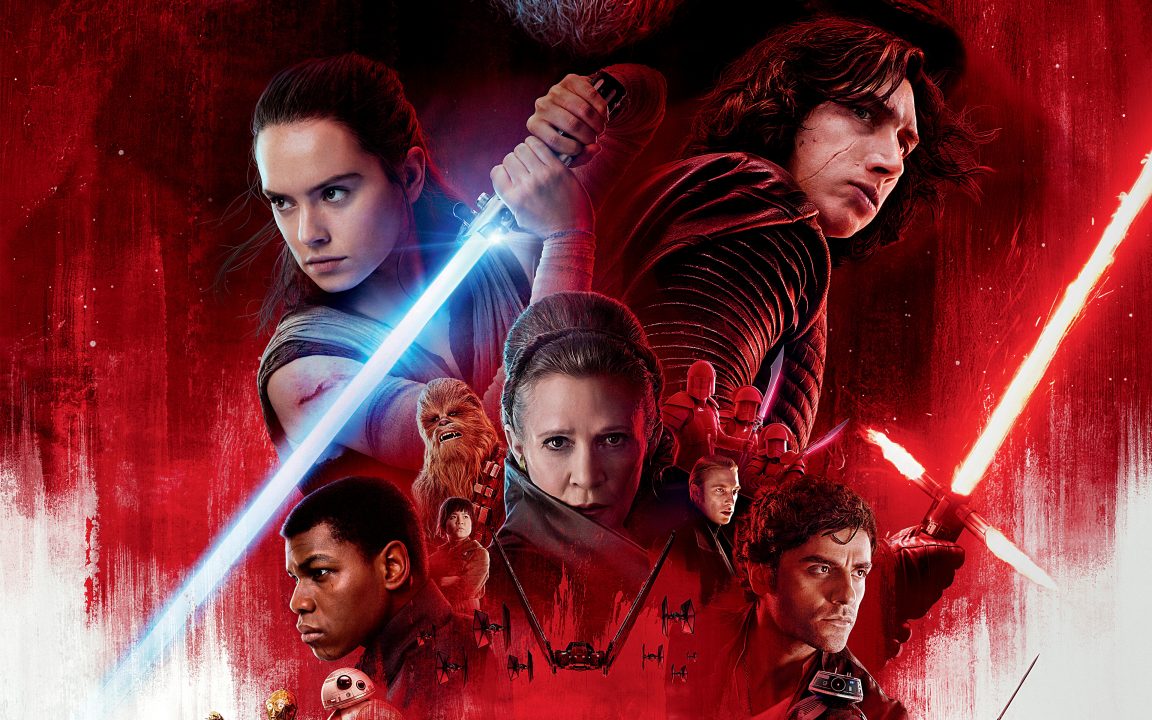 This review contains no spoilers other than what appeared in the films marketing. All story spoilers have been hidden by invisible text – highlight the invisible parts to read them at your peril!

After hitting refresh on the Star Wars franchise with 2015’s massively successful The Force Awakens, Disney tapped auteur filmmaker Rian Johnson (Looper) to helm the follow-up instalment of the Skywalker Saga, otherwise referred to as Episode 8, The Last Jedi. Johnson’s mission would be to take the saga into a new and interesting direction with newly established characters Finn, Rey and Kylo Ren, work around the sudden, tragic passing of Carrie Fisher, and continue the grand tradition of George Lucas’ vision while somehow, somehow keeping fans, investors, casual audiences and Lucasfilm itself happy. While production issues with Rogue One hinted at problems behind the scenes of the studio, and the removal of Lord/Miller from directing duties on Solo threw fuel onto embers, causing fans to feel Kathleen Kennedy’s control over her empire wasn’t as altruistic as first thought, Johnson’s project appeared trouble-free and the feeling out of Lucasfilm was that he’d crafted a story and film that would supersede expectations.

Plot Synopsis hidden by Inviso-text! Highlight to read: Rey (Daisy Ridley) has finally tracked down a hermit-like Luke Skywalker (Mark Hamill) in the hope that he’ll return to lead the Resistance out of the darkness in their battle against the First Order. The Resistance forces, led by General Leia Organa (Carrie Fisher) are on the run and pursued by General Hux (Domhnall Gleeson) and dark Jedi Kylo Ren (Adam Driver). After their ships are routed and forced to flee, Poe Dameron (Oscar Isaac) and former First Order Stormtrooper Finn (John Boyega) hatch a plan to recruit a codebreaker (Benicio del Toro) to hack into the First Order’s command ship and prevent it from pursuing them. Finn, together with rebel technician Rose (Kellie Marie Tran) journey to a distant planet to secure the codebreaker’s services, whilst Poe and Resistance Vice Admiral Amilyn Holdo (Laura Dern) find themselves at odds as to how to proceed. 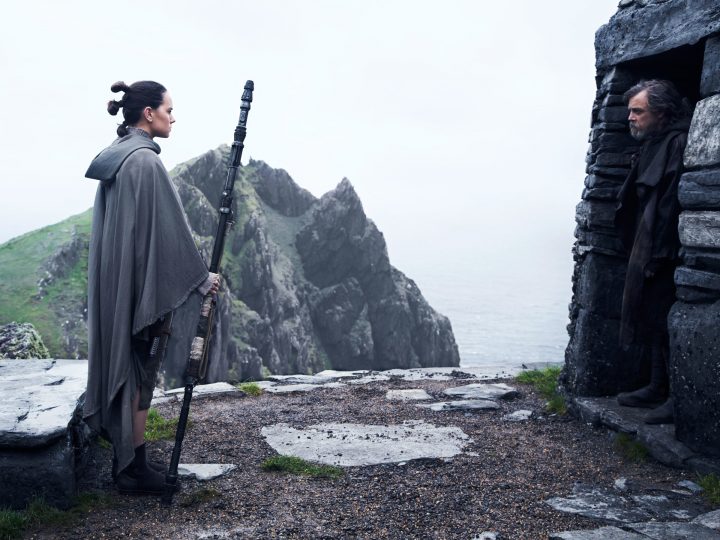 There’s a line in Return Of The Jedi I always had trouble reconciling. It was Obi Wan Kenobi’s “…from a certain point of view” moment, and I could never work out what he meant by that – at least, what he was referring to as the other point of view. Part of The Last Jedi’s worm-like plot device includes an event that differs depending on your point of view, and it’s a marvellous work of narrative establishment by Rian Johnson that crystallises one of the film’s most shocking revelations. It’s this keen skill that the director weaves into a lot of The Last Jedi, and as a result crafts a film that’s not only worthy of the Star Wars name but takes established mythology and astutely sends it careening into avenues I never expected would be explored. If nothing else, it certainly taps into saga creator George Lucas’ idea that each film should “rhyme, like poetry” with the others. This film certainly does that. 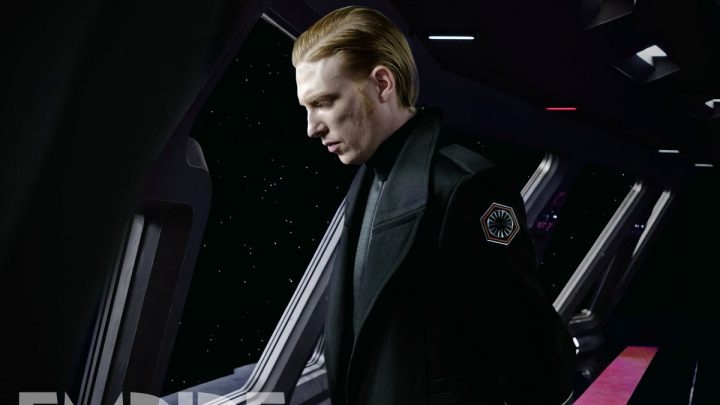 The Last Jedi is less an action film and more a combat between ideologies. As with previous Star Wars films, The Last Jedi is focused primarily on the battle between the Light (Luke, Rey) and Dark (Kylo Ren, Snoke) sides of the Force, and much of the emotional complexity of the film revolves around this tenet. Johnson imbues Rey with an innocence and hardy resilience that serves her well, mirroring in many respects a younger Luke in Return of The Jedi, always trying to see the good in Kylo Ren. Ingeniously, the relationship between Rey and Kylo plays out across galaxia, and through their dialogues about who’s right or wrong we learn much about them both. Critically, the tragic villainy of Kylo Ren established in The Force Awakens is expanded masterfully by Johnson’s darker, emotionally charged screenplay, and lengthy scenes of exposition and extrapolation play out that are redolent of a deeper understanding of the nature of these characters than even JJ Abrams gave us. 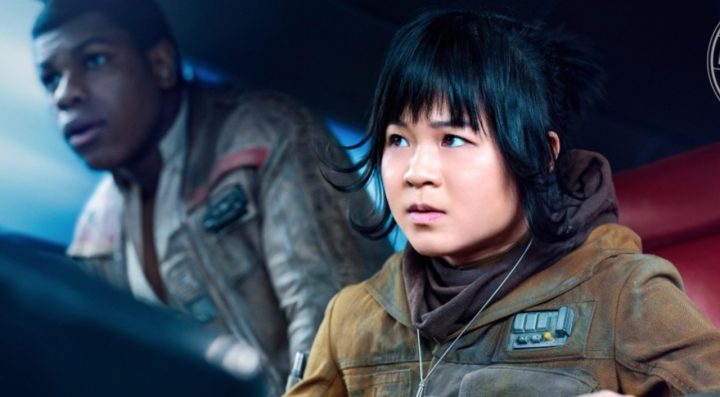 The Last Jedi contrasts it darker elements (and there are a few, namely between Rey and Kylo, and Rey and Luke, with Mark Hamill giving his iconic role a truly remarkable depth I doubt even he felt could be achieved)  with some moments of comedy, as Johnson offers not just minor slapstick but also clever physical humour, sarcasm and post-modern observational gags to keep the audience flitting between the sadder elemental moments and the broader, childlike japes Star Wars has always given us. It’s a balancing act that could work well when done right, and bomb badly when not, and thankfully Johnson does a masterful job catapulting us into battle with some nice gags and a couple of truly remarkable moments of abject awe. The Last Jedi doesn’t just tear up the Star Wars playbook, it casts it into the fire and watches its ashes scatter. Abrams gave us Force-held mid-air laser-blasts and the Millennium Falcon emerging from light speed barely above the surface of a planet to enjoy; Rian Johnson delivers several moments of jaw-dropping unexpected stuff like that, that will make you squeal with delight. Sometimes they’re small moments, other times they’re plot-central beats of pure sci-fi fandom. 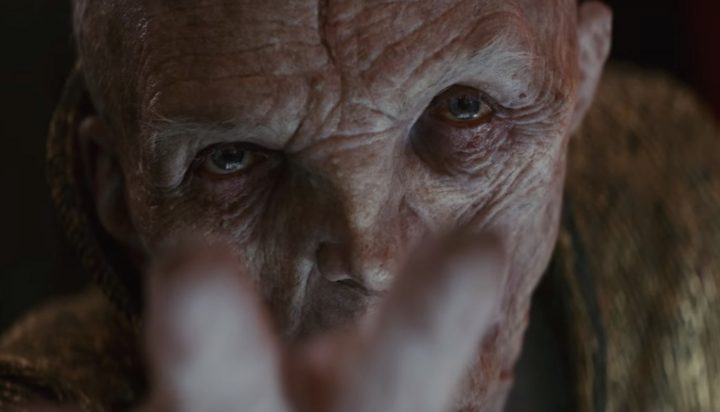 As you’d expect from a film with such a large ensemble cast, Johnson has many, many balls in the air to juggle. Thankfully, with only a few minor exceptions, he delivers great audience beats for all of the characters we know and love, and builds a solid foundation for the few new ones to work with in Episode IX. Rey, Luke and Kylo snare the lion’s share of dramatic work, with Carrie Fisher’s solemnified Leia Organa holding firm in keeping the fragmenting Resistance together, leaving Finn and Rose to work their screen chemistry in a sidebar story that’s not quite as interesting as it pretends to be but earns a tick from me for allowing Finn to develop and newcomer Kellie Marie Tran to deliver a rousing, emotionally resonant arc that surprised. Finn and Rose are witnesses to the greed of those who serve the First Order, although war is muddied by grey and we see the wealth the Resistance has afforded those who seek to profit of the conflict. Previous franchise characters, such as Snoke (a motion-captured Andy Serkis), Captain Phasma (a chromed Gwendoline Christie), and Domhnall Gleeson’s withering General Hux (once again sneering his way through a film with a genuine sense of evil glee) all have their moments to shine, as do the leading cast, so nobody really dwindles or vanishes from the narrative. I was a touch disappointed with the disservice afforded to Poe Dameron, with Oscar Isaac reduced to more an observer than participant than I’d have liked, while Laura Dern’s work in this film felt impinged by her status compared to Carrie Fisher’s Leia. Overall, though, I felt Johnson neatly delivered some nice moments of story and development to all the major players that set up the next episode in this saga. 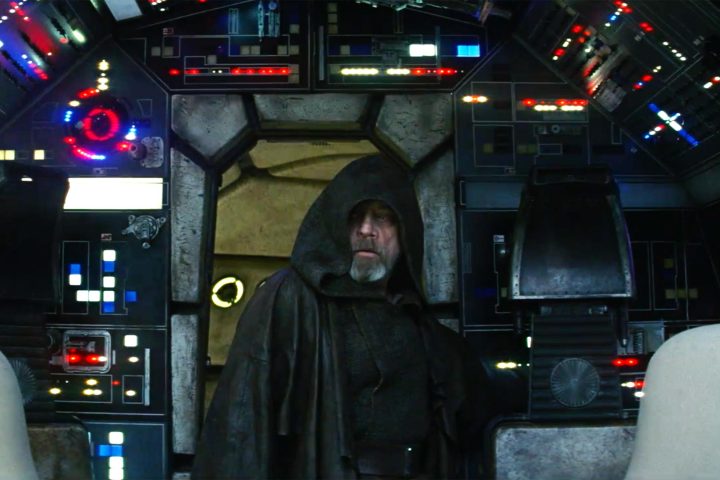 In terms of scope, The Last Jedi did feel a little narrower than almost all the franchise’s previous instalments. This isn’t a criticism, but rather a complement in the power of Rian Johnson’s storytelling that he could keep such a monumentally expansive character piece so contained to so few galactic locations. Whereas Lucas’ prequel films seemed to flit between planets and systems like they were nothing, and the original trilogy seemed to limit itself to maybe two or three main locales, The Last Jedi feels even tighter (it isn’t in actuality, it just feels that way) and it’s thanks to the strength of the writing and performances that this is achieved. The narrow-focused scope of the narrative is contrasted by the visual scope The Last Jedi offers, and in every way this film is just beautiful to watch. Johnson’s use of light and shade, his ability to tell a story through the use of the widescreen aspect, to showcase the best visual effects alongside brilliant practical work (BB8 once again steals a lot of the show, although can I just be one of the early ones to suggest the Porgs, who featured prominently in the film’s marketing, aren’t that bad and work well as comedic beats between the drama) and I’d even suggest it’s a better looking film than even Rogue One or The Force Awakens (not that it’s a contest or anything).

Of course, no review of Star Wars would be complete without mentioning the talents of the inestimable John Williams. Williams’ iconic Star Wars themes are again in play, and whereas a chief criticism of The Force Awakens was that he seemed to be on autopilot there, with The Last Jedi he flexes his creative muscles again. Although I lament the introduction of a truly unique new theme for this current trilogy, the return of Luke’s theme from the original trilogy is omnipresent here (as is Luke Skywalker himself, really, both on-screen and off) as well as a number of the franchise’s immediately identifiable tunes brings gleeful joy to this reviewer at least. Williams’ action-packed score is near constant and it works in perfect harmony alongside Johnson’s visuals, and although perhaps not as overt as the original trilogy’s brassy overtures, contains a more emotional, more balanced musical accompaniment this time up to bat. What The Force Awakens score lacked, The Last Jedi delivers in spades.

The Last Jedi borders on exceptional at times. I suspect repeated viewings and closer analysis will tell whether the slower, dramatic beats hold up over time, but as a darker middle chapter in the new Skywalker saga trilogy I’m hard pressed to really fault it. It’s alternately fun, shocking, surprising and entertaining, it treats new and returning characters with respect and it treats the audience as participants rather than observers, which is a real testament to its director. Rian Johnson should take all the credit for several of the film’s more shocking plot twists – The Last Jedi isn’t afraid to change things up, and I’ll be surprised if JJ Abrams can offer similar jaw-dropping fan-service and story twists in Episode IX – and the whole thing, while long, is incredibly satisfying.