Auteur filmmaker Rob Zombie is a director with a potent aesthetic who doesn’t really know when to stop. He seemed like a natural fit to reboot the classic Halloween franchise, his penchant for gore and brutalist modern horror fitting perfectly into the bizarre and terrifying world of Michael Myers. His grisly horror films House of 1000 Corpses and The Devil’s Rejects were moderately successful enough for Dimension Films to give Zombie a crack at this franchise, one which had languished considerably thanks to a string of increasingly banal sequels – although H20 wasn’t bad, I admit – and if you’re into that rough-hewn nightmare fuel Zombie likes to give us, then Halloween’s 2007 rebirth is bloody B-movie perfection. It’s by no means a great film, or even a very good one, but considering its “star” is one of the most prominent psychopathic serial killers the big screen has ever had, Zombie’s solid vision for the characters overcomes inept acting and truly risible dialogue well enough to make it “entertaining”. 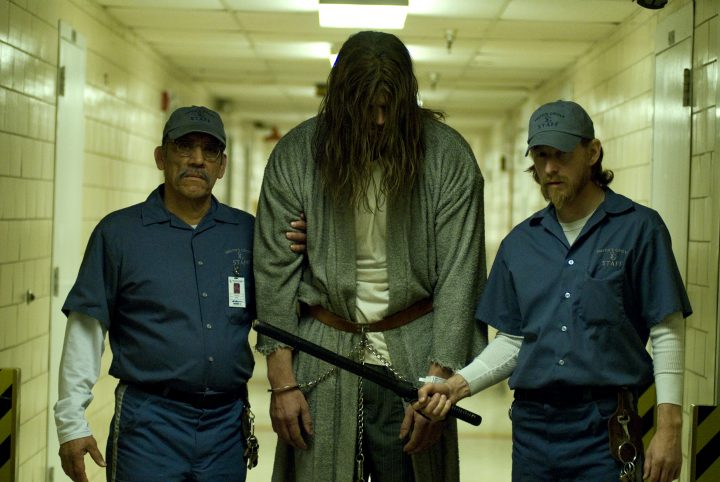 Young Michael Meyers (Daerg Faerch) lives with his mother (Sheri Moon Zombie) and hideous stepfather (William Forsythe), as well as his promiscuous sister Judith (Hanna R Hall, better known as the young Jenny from Forrest Gump), in Haddonfield, Illinois. Bullied at school, and showing signs of violent underpinnings, Michael’s mother is approached by resident child psychologist Dr Samuel Loomis (Malcolm McDowell) for appraisal, although she initially refuses his advances. After Michael slaughters all in his home except his mother and infant sister, he is sent to an institution after being convicted of first degree murder. Undergoing treatment with Loomis, Michael is continually visited by his mother, but after he slaughters a nurse his mother kills herself, unable to handle an untenable situation. Fifteen years later, a now-adult Michael (former WWE star Tyler Mane) escapes incarceration, returning to Haddonfield on Halloween to continue his murderous spree; there he encounters the young Laurie Strode (Scout Taylor-Compton) and her nubile young school-friends, and begins his Halloween-night butchery of them and their families, all while Dr Loomis chases him down to hopefully stop the carnage. 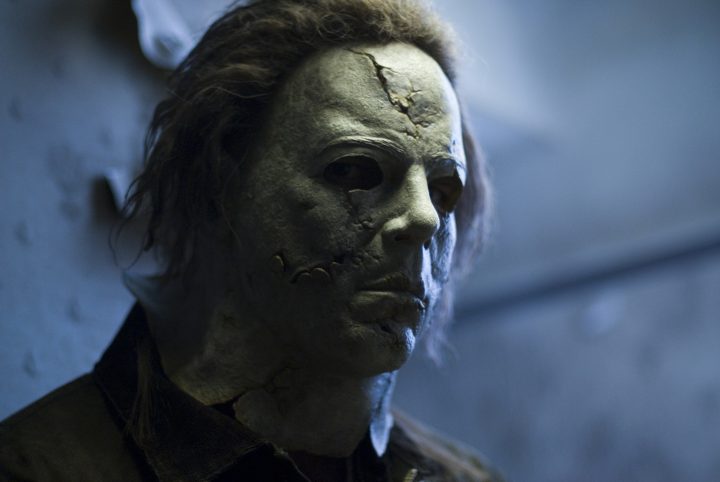 Halloween is essentially an origin story, for better or worse, and although explaining our monsters’ beginnings leaves less to the imagination than I’d like, Zombie’s screenplay does a commendable job filling in many blanks I had with what must drive a character like Myers. To his credit, the man’s sensibility towards Myers as a tragic figure of circumstance works well enough, removing a lot of the inherent insidiousness of the character and turning him into a sympathetic figure, so if you’re against this idea then this film probably ain’t for you. Making Myers sympathetic doesn’t remove his evil nature, though, but it adds a level of complexity to what was traditionally a one-dimensional killing machine. Michael’s relationship with Dr Loomis is given a central weight thanks to the addition of Malcolm McDowell, who imbues the character with a sense of off-balance professionalism and resigned pragmatism; he’s the one who at least tries to help Michael, rather than consider him a frightening freak. 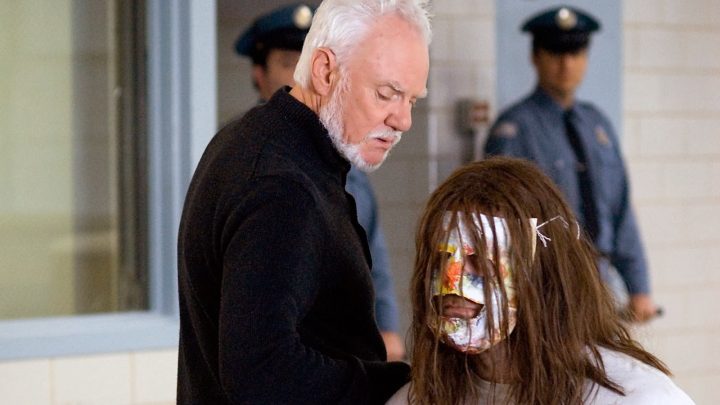 Most problematically for Halloween’s bloodthirsty narrative is that one Michael grows up and dons the various masks he wears throughout the film, he becomes far less interesting. Myers’ thuggish brutality and impenetrable stoicism lack menace, and he once again becomes the enormous death machine that silently destroys everything in his path without offering further growth as a character. Zombie starts the film with his manifestation of evil but never continues this arc once Myers escapes his asylum imprisonment. At key moments, Zombie uses John Carpenter’s iconic musical theme as a method of approaching doom, or predestination for its central character, although if you can believe it the moments feel largely unearned, somehow shoehorned into the director’s normally death-metal style of schlock-shock horror incongruously. Once Zombie reaches the point at which he’s remaking Carpenter’s original film – a point which comes nearly an hour into this version – the viewer has not only seen Myers slaughter his family with a baseball bat, a nurse with a fork, and poor Danny Trejo with a television (a blessed cameo cut short in the most brutal of manners). That’s even before the casually free-spirited Laurie Strode arrives on screen.

One of the most memorable moments of Carpenter’s original is the approach he takes with Myers’ stalking of Laurie herself, appearing behind trees and walls and in the distance, an unsettling presence that manifests in the most horrific of ways later on. Zombie appropriates this approach and gives it his own flavouring, injecting ribald language and adolescent sexuality into the sequence although it doesn’t come off nearly half as menacing. It’s a testament to Zombie’s visual acuity that he elevates the material visually beyond the film’s truly awful dialogue. Zombie’s approach to conversation is vulgarity, misogyny and depravity, and while it worked before (especially in The Devil’s Rejects), here it feels too juvenile, too unnatural to carry such a lengthy film. Some material works – Laurie Strode and her friends really do seem natural and believable – but for the most part, the lines thud to the floor with lead-filled inanity. Zombie’s overt sensualization of the characters, particularly the young girls who are supposedly school age and yet get their tits out despite awkward jailbait themes, prickles the murk of unwarranted but allows maximum titillation and the oft-quoted connection between sex and death that horror has done so well for years.

Of course you’re not really even here for the tits and ass, are you. You’re here for the killing, and Halloween delivers plenty of that, as interwoven between story points as it is. The film establishes a brown-hued dusky visual style that evokes blood the colour of tar, and shadows as deep and menacing as a cave. Myers’ butchery lacks a truly insidious sense of occasion, although it’s as bloody and violent as the franchise and genre allow; one might say it’s largely unremarkable. As attuned as modern audiences are to the likes of the Saw franchise’s torture porn viscera, or the likes of the Texas Chainsaw Massacre remake’s body-tearing gore, Halloween is an underwhelming, near homogeneous level of animosity, relying more on our collective impression of Michael Myers’ implacable evil rather than anything Zombie establishes himself. But at least there’s something here, even if it’s not particularly scary as much as it is just shocking. Zombie is a shock merchant, and Halloween’s trade is his bread-n-butter, but he can’t quite nail the truly ghastly stuff Myers’ enjoys acting out here.

Halloween is a virtuous attempt to de-mythologise it’s central character, the monstrous Michael Myers. It doesn’t always succeed in reinventing the horror wheel – it’s a far lesser film that the thunderous Texas Chainsaw remake in 2003 but a superior one to the inept Friday The 13th reboot in 2009 – but it will probably delight fans of the franchise who are expecting something deeper than simply another rehash. At times the film does generate legitimate chills as Myers stalks his prey, and at some salacious level it’s enjoyable from a purely pulp, grindhouse perspective. But Halloween’s brooding 2009 edition is a sonic fury signifying very little; unclear characterisation, often rancid dialogue and unlikable characters with few redeeming features make for a maddeningly obtuse viewing experience. As weird as this is to say, Rob Zombie’s Halloween felt a little bit generic, lacking the director’s nominally present sense of dread or nihilism, and I felt underwhelmed by the decidedly dullard kill sequences as they unravelled. Eerie in parts, ponderous in others, Halloween feels adventurous in trying to give us something different but restrained in truly shocking us with surprise.