The Dream Child is the third of the mini-trilogy inside the Nightmare franchise, continuing the narrative from the third and fourth sequels respectively, and it sees Lisa Wilcox’s Alice now pregnant and haunted by Freddy Krueger through her unborn child. The film gives us a bit more insight into the origin of Freddy himself (alluded to in previous instalments but never really depicted until now) and is by far the darkest, and most violent of the series to this point. Notably, the film initially received an X rating by the MPAA for its original cut, owing to the extreme nature of some of the film’s more brutal death sequences, and even without significant cutting of material The Dream Child has some moments of abject horror indeed.

Alice (Wilcox) is finishing college, alongside boyfriend Dan (Danny Hassel), and new friends Yvonne (Kelly Jo Minter), Mark (Joe Seely) and Greta (Erika Anderson), and the memories of Freddy Krueger (Robert Englund) are beginning to fade. However, as graduation approaches, Alice begins to have a recurring nightmare about Krueger’s birth – his mother, Amanda (Beatrice Boepple), a nun working the local asylum, is raped by “100 maniacs” and gives birth to a deformed entity which slithers its way into the costume of Freddy once again, and the horror begins anew. 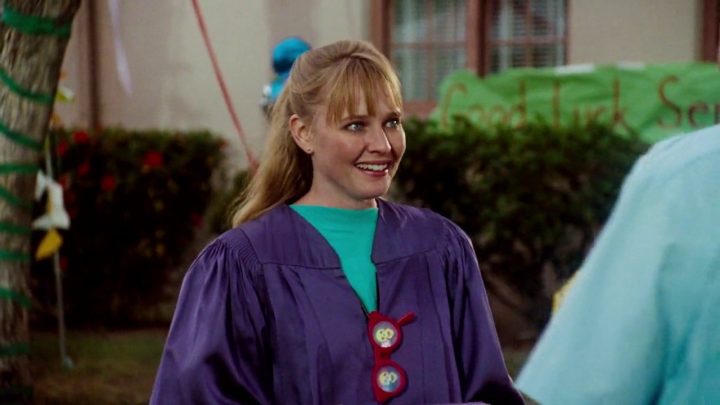 Among the things I liked about The Dream Child was the film’s sense of continuity. It embraced the previous films, enlarged their scope, and gave us a backstory to Freddy’s origins that personifies the horror genre superbly. An unstoppable demonic force, birthed from the rancid fluids of the thematically insidious maniacs we glimpse during an early asylum sequence, who seeks out nubile teens in their dreams, and slaughters them with his penchant for glib one-liners and brutal violence: how does one combat such supernatural extremes? To be honest, this is a question which has baffled me throughout the entirety of the Nightmare On Elm Street franchise until now, given Freddy’s immortal nature and the bizarre nature of the dream world being almost impossible to combat in a traditional manner. The Dream Child doesn’t pretend to offer nuance to this narrative, either. 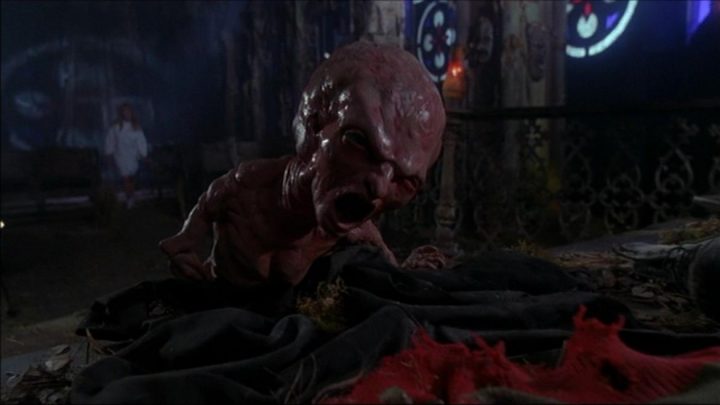 The film’s screenplay is credited to Leslie Bohem, with a story by splatter writers John Skipp and Craig Spector, and it’s fair to say that Bohem’s work isn’t exactly revelatory. It’s your basic set-em-up, kill-em-off routine, carbon-copying previous films (and the entire genre, if I’m truthful) by having a new clutch of fresh meat to kill in endlessly inventive ways, as well as Freddy’s patented glib sense of humour. The film’s roster of characters inhabits the archetypal collective of the Elm Street franchise – the fragile female hero, the hunky stud, the nerdy best friend, the beautiful supermodel suffering parental pressure to conform, and of course the token black girl who doesn’t believe any of the shit that’s going down. Oh, and the typical roster of concerned parents who never know (or don’t believe) about the supernatural nature of Alice’s problems. Wilcox’s Alice takes the lion’s share of plot development, although accuracy as a young mother isn’t one of the better aspects to this film. Danny Hessel reprises his role of Dan from the previous film (and acts better here than before, so applause for him!) while newcomers Kelly Jo Minter, Joe Seely and Erika Anderson provide indifferent support throughout. Robert Englund continues to have a blast playing the malevolent Krueger, acting as he does through layers of prosthetic makeup and oodles of practically achieved visual effects. Also fun to spot was the supporting role of one Whit Hertford, as Jacob, Alice’s dreamworld son: Whitford is probably best remembered as the smartass kid Alan Grant terrorises with a raptor claw at the beginning of Jurassic Park. 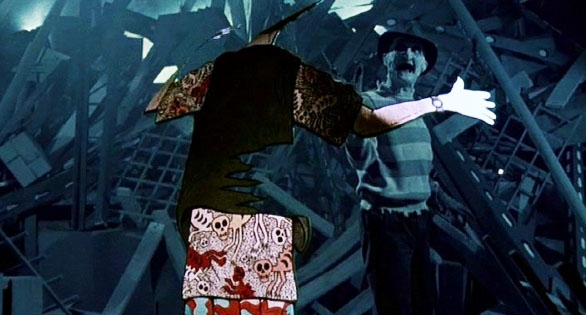 Although layered in style to burn, The Dream Child suffers from horror film fatigue, gamely going about its incredible visual effects and production design with the subtlety and nuance of collapsing infrastructure. Director Stephen Hopkins (Predator 2, The Ghost & The Darkness) infuses a deep sense of dread and violence to the deaths of our heroes, and plenty of effective visual motifs to energise what is basically awful acting wrapped in very clever film-making. Despite looking amazing, and boasting some remarkable practical visual effects (including, but not limited to, a fully realised comic book world, a character eating herself to death, and a startling vehicular torment that’s among the strongest elements the franchise has yet delivered), The Dream Child’s insufficient plot and often risible acting performances (especially from Wilcox in the lead role) make this a film that by definition is entirely style over substance. Sustained nightmare sequences and confusing plot development inhibit the film’s truly scary aesthetic, and Krueger has become a far less menacing figure as the saga has progressed, giving credence to the idea that “explaining” his backstory as a method of developing him really works against the franchise overall. By removing his mystery, you remove much of his menace. 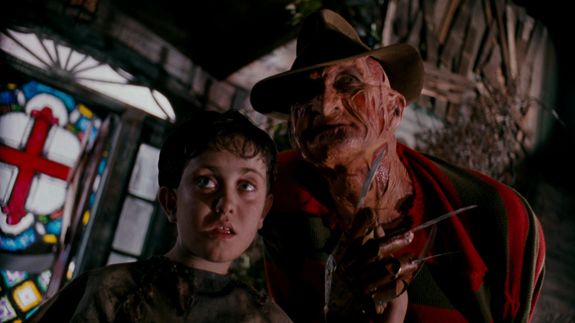 The Dream Child is essentially a “kitchen sink” film, a film in which every manner of effect is utilised in bringing Krueger’s world of torture and death to life, from stop-motion to model-work to matte paintings to an excellent Escher-painting sequence in the film’s operatic final act (although I have to say, it was an effect achieved far better in Jim Henson’s Labyrinth), while the gore and blood are sustained in their visceralness. One suspects that most horror films made after Hellraiser had to up the ante of gore and it would seem that The Dream Child, moreso than it’s immediate predecessor, tried to at least imitate the same sense of shocking body-horror Clive Barker delivered with his seminal movie. Although some of the more grisly visual imagery in The Dream Child is derived from the notion of birth, conception (there’s a subliminally vaginal moment within this film that I think might have gone over the heads of the intended audience) and infancy, Hopkins’ direction elevates brash, hyperkinetic imagery above coherent storytelling far too often to make this film feel sustained in its skin-prickling terror. One can’t fault the film for its unnatural cadence and sense of a more adult intellectual horror tendency, but The Dream Child’s iniquitous roster of performances, tin-eared dialogue and illogical plot points negate all the good work done at a technical level. 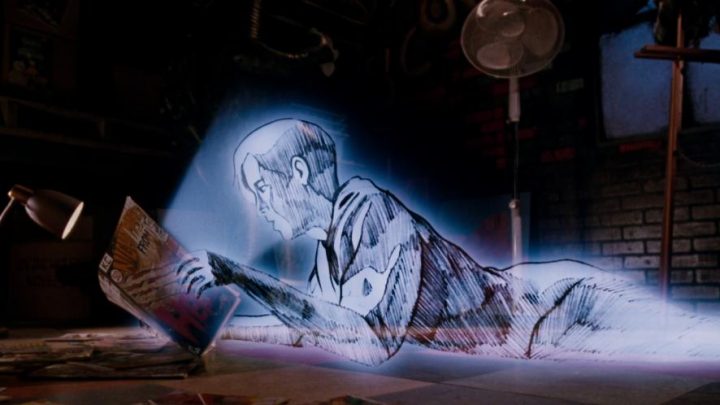 The Dream Child is a delight for horror aficionados and those who study the art of practical effects. Although weakened by its inclusion, the film tries to do something new with the Elm Street series and provide a more elemental backstory to Freddy Krueger’s origins, whilst obviously spending more money on all the glorious nightmarish effects and settings. The production design team on this film should be given all the awards for what they managed to achieve here (even more astonishing considering the film’s budget was apparently only $6m!), even if the surrounding characters and overall plotting leaves much to be desired. Hopkins bravely navigates the fine line between parody, comedy and outright horror and to his credit manages well enough, but there’s a tonal difference between this film and previous Elm Street entries that makes this one feel somehow lesser. Overall, a worthy entry into the canon, although one can’t help but think the characters feel too manufactured and the death scenes too overblown for their own good.