Spoiler alert: Plot points from both this film and Rob Zombie’s 2007 Halloween are discussed herein.

Picking up exactly where his first film concluded, Rob Zombie’s Halloween II delivers more of the director’s patented shock-value horror, only this time without the lengthy backstory to give Michael Myers’ his “arc”. Armed with an amped-up sense of gore and terror, and Zombie’s ability to utterly waste a plethora of decent actors in minor roles, Halloween II diverges from the franchise’s establishment and, to its credit, somewhat succeeds in making this film a truly terrifying ride into utter insanity. Not without fault, however, Halloween II often struggles with a lengthy 2-hour running time to maintain its oppressive tone, and the word “pretentious” occasionally might crop up in my thoughts about this sequel. Overall, though, Halloween II’s grungy, grainy-shuttered immediacy and protracted tension (not to mention its off-the-wall sense of sublime violence) works more often than not.

Over a year after shooting killer Michael Meyers (Tyler Mane) in the face at the end of Halloween, young Laurie Strode (Scout Taylor-Compton) is undergoing therapy with her psychiatrist (Margot Kidder) for recurring nightmares about her torment. Her relationship with Sheriff Brackett (Brad Dourif) and his daughter Annie (Danielle Harris) is fractured, although they have taken her into their home to recover. Dr Sam Loomis (Malcolm McDowell) writes another book on Myers, and begins a promotional tour in which he’s seen as exploitative and uncaring. Myers, having survived being shot by Laurie and an ambulance crash meant to take his body to the morgue, also has recurring visions, particularly of his mother (Sheri Moon Zombie) and his younger self (Chase Wright Vanek, assuming the role from Daerg Faerch, who had aged too much between films to continue the part), and is moved to return Laurie back to their home in Haddonfield, Illinois. Laurie, meanwhile, discovers her true ancestry and gradually assumes the mindset of Michael himself. 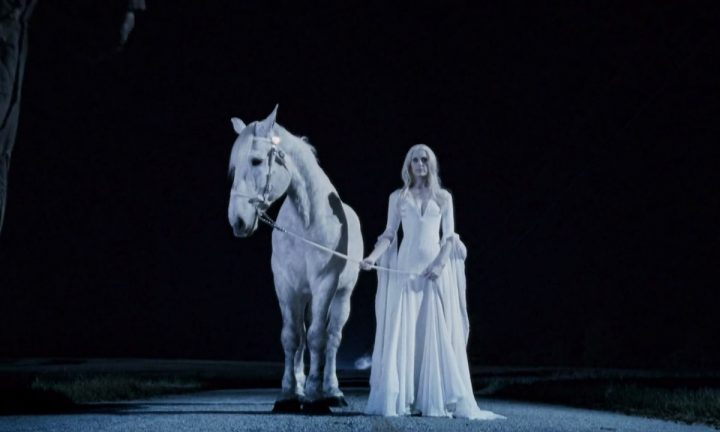 Halloween II’s most operatic sense of violent terror is held within a dynamic, riveting hospital nightmare sequence involving Laurie trying desperately to escape Michael’s frenzied butchering of the facility’s staff (in which pops up a cameo by Oscar nominated actress Octavia Spencer, as well as the always-wonderful Richard Reihle). It’s a lengthy piece of bravura filmmaking, a fifteen minute white-knuckle orgy of sound design, rain, blood, horrifying imagery and screams. The fact it ends up being simply one of Laurie’s visions, rather than a piece of “live” action, undercuts the impact of it all somewhat, and had Rob Zombie maintained a similar frenetic pace with the rest of the film, Halloween II might have been a candidate for an all-timer of the franchise to-date. Sadly, Zombie’s weaknesses as a storyteller rise again to hamstring the film in a manner that’s jaw-dropping in its assumption of audience willingness, and perplexing in its egregious iniquity. 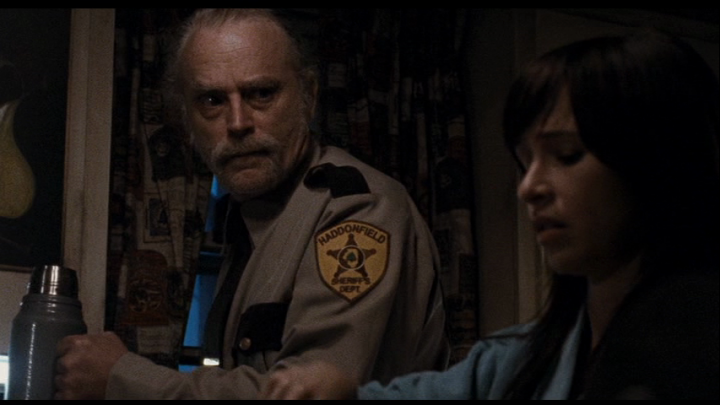 The film is noticeably low-budget in terms of visual tone, with Zombie shooting the sequel on 16mm film as opposed to the previous instalment’s use of 35mm. The lesser grade of film results in grainier imagery, a softer quality that in many ways is more a genuine throwback to the early 80’s slasher films of which this franchise was a dominant force than even John Carpenter’s 1978 original. The film’s cinematography was conducted by Brandon Trost, known for his work on Crank II and collaborations with Seth Rogen, and the lenser gives the film a disturbingly gritty feel with some harsh lighting design and deep contrast, although the depth of that contrast is substantially restrained simply by the limitations of the film stock used. Zombie also shot using a 1.85 aspect, a fuller frame than the widescreen look of the first remake, which I suspect is intended to give the viewer a “larger” image to see on a home media screen, and to better capture Zombie’s proliferate use of extreme close-ups on characters.

If Halloween was Rob Zombie’s attempt at a more mainstream style of filmmaking, Halloween II sees him go right off the rails, and not entirely in a good way. Part of me admires Zombie’s willingness to try new things, and his story for this film, whilst problematic, is at least makes a good fist of attempting to break the generic horror-film mould (so to speak) and veer away from established tropes. It doesn’t always work, and Zombie’s penchant for gratuity and ripe exploitation of his subjects gets in the way more often than not, but Halloween II is at least different enough to make itself stand alone, despite being a linear sequel. The involvement of similar “visions” between Michael and Laurie, and their seemingly supernatural connection, and Laurie’s gradual descent into the same madness as her psychotic brother (yes, Laurie’s identity as Michael’s younger sister, last seen as an infant in the previous film, is revealed comprehensively here, without any allowance for wiggling out of it later) is borne less from her experiences with Michael than it does with her inability to work through it at a psychological level. it’s a potentially interesting sidebar arc to the character that never feels fully fleshed out – again, Zombie’s shock-and-awe tactics rob much of this subplot’s sense of Shakespearean tragedy with bludgeoning violence. 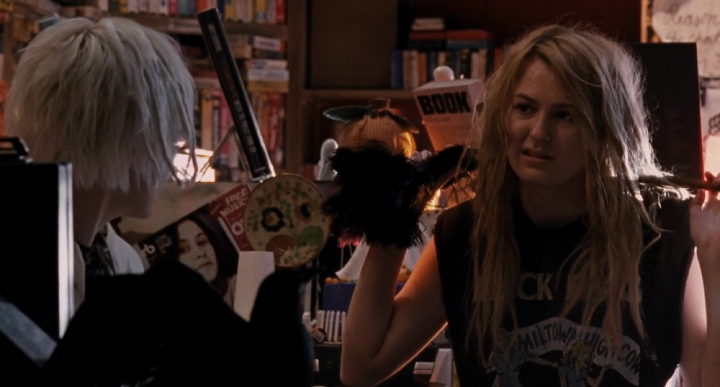 The film’s imbalance between Laurie’s arc and that of Sam Loomis, a rather refreshed looking Malcolm McDowell, is stark, and the story never weaves these elements together in a way I found convincing. At a purely B-movie level I guess there’s a moebius strip of contrivance at work and as a pulp fiction of excess there’s a lot to admire here, but my critical brain always seemed to be internally mourning a lack of coherence over legitimately interesting character work. The reprise of Zombie’s wife, Sheri Moon, as Michael’s dead but ghostly mother, is far more supernatural than this revamped grungy film series might think itself capable of delivering, but again it’s an interesting idea that doesn’t work just because we’re not expecting it, nor is it fully fleshed out (IMO). 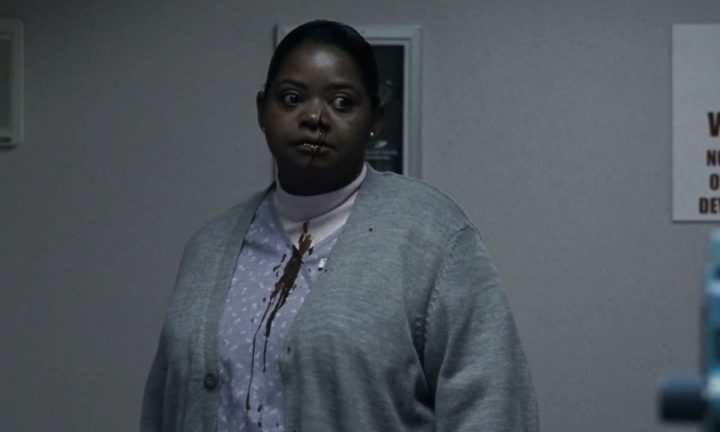 Chief among the film’s weaknesses is the dialogue (again) and the performances (again), with the former instigating atrocious appeal and the latter appealing to almost nobody. Not even Malcolm McDowell can salvage much here, stuck with a lifeless, charmless character and beset by iniquitous performances all around him. Scout Taylor-Compton, reprising her role as the eponymous Laurie Strode, is adequate at best, better at screaming and flailing about than generating an emotional response to anything happening around her. Brad Dourif’s work as the patriarchal Brackett is hidden by an unkempt beard and Zombie’s refusal to shoot him in any kind of natural light, while his on-screen daughter, Danielle Harris, is hardly compelling in her role of Annie, the hapless victim of Michael Myers’ previous spree. A bizarre Margot Kidder turn as a psychiatrist (which is kinda ironic casting, if you ask me) rounds out the healthy clutch of talent in this film beyond the leads, and all of them, literally all of them, cannot muster an ounce of truth to Zombie’s tin-eared dialogue. No, one doesn’t expect Shakespeare in a slasher, but they could at least try and deliver their lines like they weren’t just hearing them for the first time. 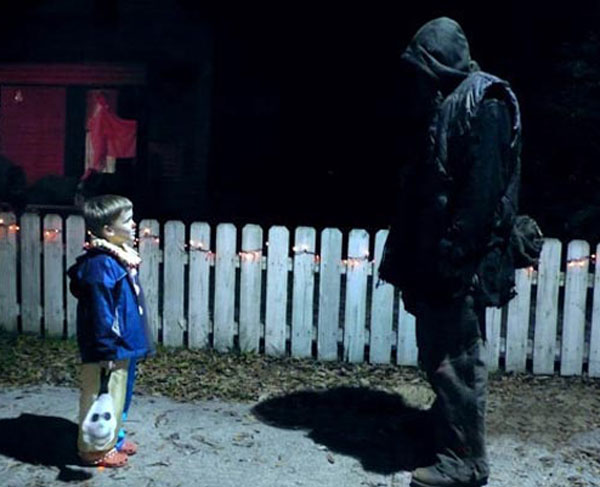 In spite of my reservations, there’s a lot that Halloween II does right, and occasionally does brilliantly. The aforementioned hospital attack sequence is brilliant, the film revels in its gore and torturous violence, with a squalid sense of theatricality mired in Trost’s urban photography. Myers’ voyage across the American landscape, encountering hillbillies and trailer trash in keeping with Rob Zombie’s kooky aesthetic, is chilling and….well, real. Despite the film’s almost impenetrable thematic darkness there’s a real sense of believability here, as if this could happen anywhere. Sure, the film has its share of genre tropes, and goes on far too long for a slasher film like this, but Halloween II succeeds more often than it fails and for that it’s worth a look.