The Assignment is easily one of the greatest films ever made, or it is among the worst. Bizarre doesn’t even begin to cover this film’s raison d’etre, a weird gender reassignment plot twist that almost works in spite of lead actress Michelle Rodriguez’ fake penis and absent breasts (and chest hair) during an early nude sequence. The first of a few prolonged minutes the actress bares herself on screen, I might add. Ripe with utterly dreadful dialogue, fuelled with a grainy, grimy sense of urine-stained life beneath the real world, Walter Hill’s pulp-inspired tale of lurid sex changes and and an insane surgeon is immediately crass, lurid trash, and cult-classic-in-waiting brilliant. Part of me hated this film. The other part of me thought it was hilarious.

In a prison hospital for the criminally insane, Doctor Rachel Jane (Sigourney Weaver) is interviewed by a psychiatrist, Dr Green (Tony Shalhoub), about her involvement in the assassination of her brother at the hands of a mysterious assassin named Frank Kitchen (Rodriguez). As we learn through flashback, Frank is caught and undergoes a forced gender reassignment surgery, as a method of torture; now a woman, Frank shacks up with a one-night stand, Johnnie (Caitlen Gerard), where she plans and plot her revenge on not only the Doctor, but city crime lord “Honest” John Hartunian (Anthony LaPaglia).

It’s hard to countenance how Walter Hill, who co-wrote the script with Denis Hamill, could think The Assignment wouldn’t upset people, especially considering how outraged people get when Caitlen Jenner is referred to as Bruce. The idea of self identity, the identity we have despite our physical form, is key to the transgender community (at least I think so, I’m not that familiar with the whole thing, to be honest) and there’s an exceptionally brief moment in The Assignment that touches on that, by way of Sigourney Weavers’ antagonistic exposition monologue. In general, though, this film’s salacious, B-grade aesthetic, grungy atmospherics and “twists” nobody cares about enough to bother seeing coming a mile away, morph what might have been a clever, cheeky play on a cringe-worthy idea and turn it into a cringe-worthy film all on its own. 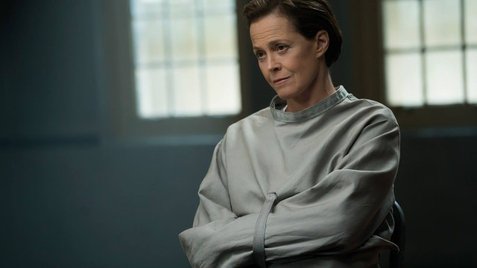 When she’s not blasting the Furious with Vin Diesel, Michelle Rodriguez’ apparently takes scripts involving baring her body for Walter Hill in tripe so poorly conceived and shot it makes late-night sex line commercials look positively cinematic. We, the world, are poorer for it. The film boasts an astonishing moment where Frank (the male version Rodriguez plays) has a shower, and before you can avert your eyes, she’s out parading across the room with a man’s chest, a penis (digital or prosthetic, I’m not sure) and so-obvious-it’s-hilarious facial growth. It’s here the film really lost me: Rodriguez is such a well known face to anyone who’s ever seen a film, it’s hard to hide the fact that it’s her, and with the film unwilling (or unable) to make a concerted effort to turn her into a man (before eking out an obvious sex change), the problematic plot becomes laughable. Maybe – and I realise I’m going out on a limb here – maybe they should have cast an actual transgender actor to play the part? Just a suggestion. At least that was this whole thing might have manifested with an ounce of truth to it. Remember that old-age makeup on Guy Pierce in Prometheus? This is that awkwardly bad in terms of character.

Despite Rodriguez’ apparent conviction in the role of man-turned-woman Frank Kitchen (eh, I guess they couldn’t spare enough to call him “Castle”, now could they?) The Assignment (probably the most obvious title for a film about re-assignment you could have, I guess) is inadequate in set-up, dire in payoff, and destitute in emotional weight; Hill himself described the film as honouring the B-movies he grew up with, and I guess if you’re looking at Frank Miller’s Sin City or those ol’ Bronson Death Wish flicks, or perhaps Clint Eastwood’s recalcitrant cowboy era, The Assignment might feel familiar to some. But on the whole it’s a cheap, nasty piece of work, neither uplifting the supposed transgender narrative nor enlightening anybody to the problems those people face other than grabbing a gun and laying waste to all around you.

Sigourney Weaver and Tony Shaloub have a great time verbally sparring, Weaver essaying a Hannibal Lecter-lite character with razor-sharp fury and arrogance, while Shaloub seems content to enjoy the outclassed-but-endearing psychiatrist trying to understand Dr Jane’s motives. Anthony LaPaglia’s cringeworthy crime figure is a one-dimensional cardboard cliche offering zero interest, not even to the characters within the film, let alone the viewer. Caitlen Gerard’s Johnnie (because giving her a female name wouldn’t have been as “hilarious” in a transgender film where everything is “changed” in some form) is simplistic, offering scant romantic chemistry with Rodriguez, and the twist in the tale of her arc is disposed of with a fairly lackluster “meh” moment. 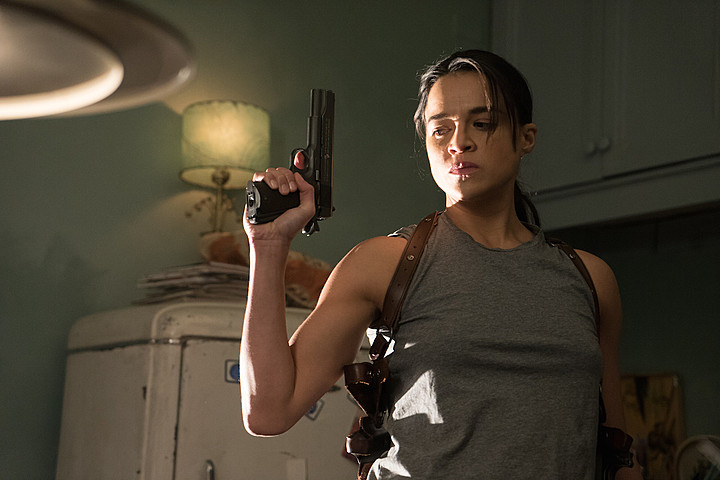 Chief among The Assignment’s problems is the script. The dialogue in this film is awful; heavy-handed exposition, unflattering over-explanation and a remarkable lack of subtlety when dealing with Frank’s apparent conversion into being a female, it’s truly head-scratching anyone – particularly Rodriguez, who must have signed up for this without reading the screenplay – to think this might make compelling viewing. Even as a B-movie the howlers come thick and fast, shining a light on the constantly terrible, wooden acting, all of which does little to make this film “entertaining” in a positive way. Hill’s tin-ear dialogue and confusingly unjustified belief that his pronouncements through the voice of Weaver’s Dr Jay are world-changing somehow are laughable more than competent, and poor Rodroguez isn’t afforded the ability God gave her to make even this odiously trashy character even tenuously likeable.

Rodriguez’ body-baring antics aside, The Assignment’s action antics are less than stellar. Walter Hill’s directorial style could best be described as iniquitous, with close-quarter camerawork making it hard to figure out a scene’s framework or the spatial ability to comprehend who’s doing what, and to whom. The cinematography is bleak, with shadows looming throughout the frame, and the colour palette bordering on squalid. This isn’t a pretty film, at least by design, and the characters within it so obviously live in that mired mucky world it kinda saps all the joy of of everything. Despite the salacious nature of the plot, and the chance to take in Rodriguez pretending to be a man now having to live as a woman, and the promise of lots of gunplay, The Assignment misfires on every single available cylinder. On the Verhoeven Scale of cinema so-bad-it’s-great, this charts at the lowest possible end of the scale. There’s people who’ll lap this trash up, no doubt. For me, however, The Assignment was a fail in almost every aspect.