There’s perhaps no greater debate throughout the United States than that involving guns. The US Constitution’s infamous 2nd Amendment, allowing citizens the right to bear arms, has been a bone of social, ethical and moral conflict in policy decisions within the United States thanks to the influence of the powerful gun lobby (overseen by the NRA), a plot conceit central to Miss Sloane’s tense, engaging subtext in depicting US lobby groups and their sway over political legitimacy. Led by a rock-solid Jessica Chastain performance, anchored by a taut, labyrinthine plot by screenwriter Jonathan Perera, and driven by John Madden’s sparkling direction, Miss Sloane is far better than I gave it credit for (I’d never heard of it before it popped up on iTunes) and well worth your time to watch.

Chastain plays Elizabeth Sloane, a high-powered lobbyist in Washington who leaves a high profile firm to join a smaller on in the fight to have a significant piece of gun control legislation passed by Congress. Her boss, Rodolfo Schmidt (Mark Strong) sees in her a way to win, while fellow staff, including the enthusiastic Esme Manucharian (Gugu Mbatha-Raw), are led by her steely resolve and cut-throat approach to political activism. Her former firm, run by George Dupont (Sam Waterston) and managed by Pat Connors (Michael Stuhlbarg), take the side of the gun lobby, manifested by the odious Bob Sanford (Chuck Shamata), running campaigns to smear and decimate the other through all aspects of gun control arguments. However, when Connors uncovers a faked document involving one of Sloane’s previous cases whilst digging for a smear campaign, it turns out all bets are off.

Miss Sloane is a hell of a tricky film. It’s one of those plans-within-a-plan films, much like Law Abiding Citizen, Runaway Jury or The Usual Suspects, and while it could have tripped itself up by trying to be too clever, or manifested as preposterous thanks to overplotting, Miss Sloane delivers absolutely on its promise of dramatic thrills and plenty of sweet, sweet moments of surprise. If I’m overselling it somewhat, it’s only because I believe this film to be a real slow-burn success: if it was a book, its cover blurb would scream “I couldn’t put it down!” and stuff. In one of the more intelligent surprises of the year, Miss Sloane might think you have it clocked, might have guessed some of the surprises, but you’ll never guess the real twist in this story’s tale. It’s a doozy. 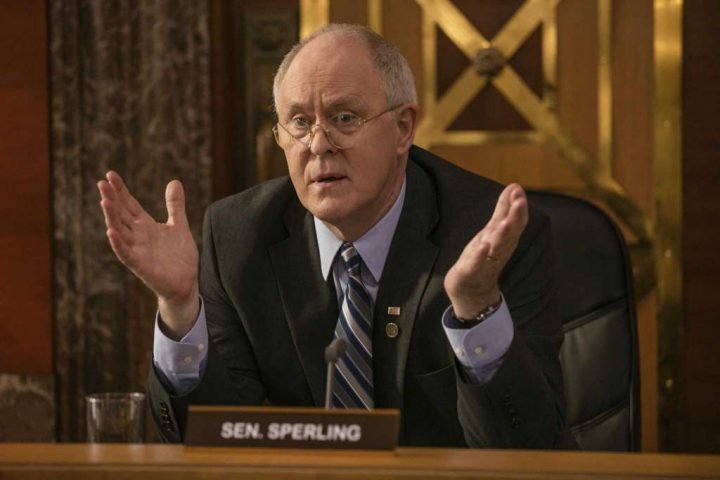 Part of what makes Miss Sloane such a compelling watch is that it doesn’t really take sides in the gun control debate (that I could infer, anyway) but uses the conflict inherent in such inflammatory rhetorical discourse to saturate itself with an immediacy and a realism that propels the narrative through even the most astonishing leaps in logic. The film also doesn’t pander to exposition, which you might find puzzling given Miss Sloane’s talky nature; hell, it doesn’t even really dwell on the characters much as far as people and focuses more on them as pawns in Sloane’s masterplan to win. Sure, there’s emotional heft here – Gugu Mbatha-Raw’s character, Esme, strikes a sweet tone between combative ally and ineffectual tool for Sloane to use, and Mbatha-Raw personifies the conflicted nature of American society with ease as her arc reaches its peak mid-film. But Sloane herself remains relatively distant, as emotionless as the woman herself, ably personified by a clench-jawed and ferocious Chastain. The film rests entirely on her shoulders, and similarly to her leading role in Zero Dark Thirty, Chastain delivers the goods.

As somebody living outside of the United States, the political system America chooses to use utterly baffles me with its ineffectiveness and bloated, indulgent chicanery (*looks at the real America right now…. shudders*) and as with any great American political film, there’s plenty of white boards with opposing numbers of senators whose votes are needed to either succeed or win. I guess it stumbles into the age-old ticking clock motif: the number of required votes by a certain deadline induces gradually inclining panic amid the protagonists, equal to the panic of impending loss by the opposing party. Sadly, Miss Sloane falls into the trap of corrupt politicians being the chief kicker for the plot’s advance, with both John Lithgow (as the man behind a senate hearing into Sloane’s activities in an attempt to besmirch her reputation) and Sam Waterston’s indignant campaign chief, being the fall guys for the eventual denouement. It’s not so much that they are as such, but rather how it all unravels, that’s marvellous to watch here. 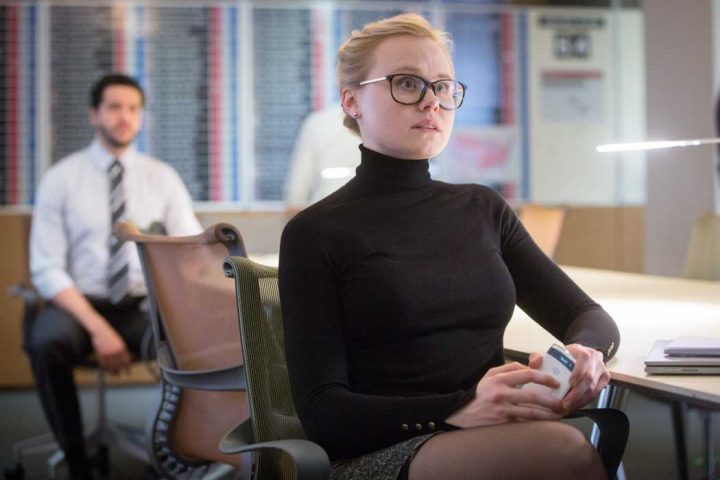 Having said that, Miss Sloane is directed with such withering precision, such layered and second-guessing beauty, you can’t help but admire the mechanics of such a splendid lark falling into place. Hell, you won’t even mind being hoodwinked so completely, you might have to go back and rewatch parts of it to make sure you saw what you think you saw. Contrasting the heady, nasty debate of gun control with Miss Sloane’s shady subtext and slow-build sense of impending personal catastrophe, a viewer could be mistaken for thinking the film’s using its foundation in a paradoxically insubordinate manner – after all, real people are affected by gun violence every single day in America – but the film never converts to melodrama in search of its sense of purpose. This is a credit to director John madden (Shakespeare In Love, The Best Exotic Marigold Hotel), who infuses the film with a natural urgency and moral obfuscation. Do Sloane’s methods outweigh the result (or possible result), or is she right in her at-all-costs motives for bringing the gun lobby down a few pegs? It’s an interesting quandary, and one I think  you’ll side with depending on your view on the Second Amendment.

Miss Sloane is a sucker-punch film that deserves a wider audience. It’s a terrific yarn, borne out of a semblance of truth to the US political system, and Chastain is dynamite in the leading role. It has more surprises up its sleeve than a magic show and delivers its coup de grace with the skill of a seasoned swordsman. There’s something cathartic about seeing somebody’s long-game play out, and Miss Sloane does it better than I’ve seen in a very long time. Understated, underrated, and definitely underappreciated, Miss Sloane is a dynamite political thriller that delivers a crackerjack knockout blow you will absolutely not see coming.