The Conjuring was one of 2013’s best scare flicks, a chilling little horror film from Saw and Insidious helmer James Wan. Three years later, we have its sequel, an England-set haunted house premise featuring returning stars Vera Farmiga and Patrick Wilson, playing husband-and-wife team Ed and Lorraine Warren, a duo of paranormal investigators who travel the world examining experiences of the supernatural. As with both this franchise and his Insidious films, Wan’s eye for the creepy, skin-prickling tension of quality scares is on-point once more, as he layers set-piece after set-piece in an almost brutal effort to smother is into submission with ratcheting alacrity. 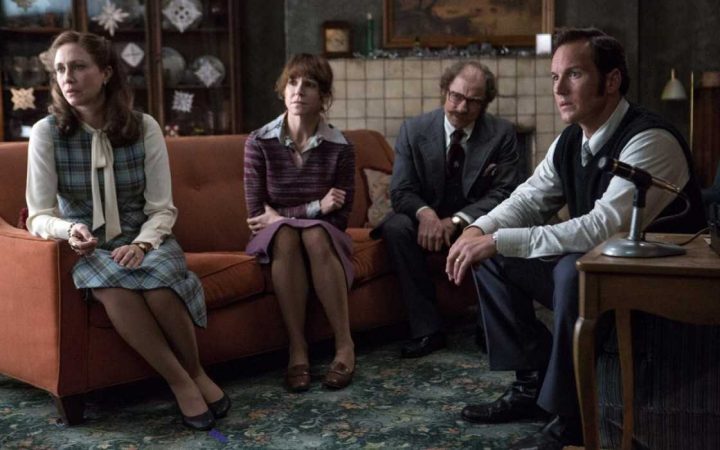 The Warrens learn about what would become known as the Enfield Poltergeist, following claims of single mother-of-four Peggy Hodgson (Frances O’Connor) that her house is haunted by some malevolent entity. With the focus falling onto Peggy’s second child, daughter Janet (Madison Wolfe), who seems to be the conduit for the entity, the Warrens work with fellow investigator Maurice Grosse (Simon McBurney) and sceptical German parapsychologist Anita Gregory (Franka Potenta) to determine the root cause of the haunting, in order to facilitate a possible exorcism by the Catholic Church. In doing so, Lorraine is haunted by dreams of a demonic nun (Bonnie Aarons) with ties to Ed’s future, a future in which he is horrifically killed; the link between the Enfield entity and Lorraine’s visions are unclear, but her inability to see the demon in the Hodgson’s house is both frustrating and dangerous.

James Wan’s second direct sequel film is a tale of two distinct halves. The first half sees the Warren’s remain in their Los Angeles home, with Lorraine plagued by visions of the demonic nun, and concerned that their dalliance with the supernatural will bring about Ed’s demise. Also in the opening half, Wan devotes some serious time to depicting the various hauntings and events to take place in the Hodgson household, and the paralysing fear that something is destroying their lives. For much of the opening half, The Conjuring 2 plays like a fairly standard jump-scare horror flick, setting up low-frequency aided sequences of crash-bang tropes like slamming doors, loud knocking, moving furniture, and increasingly desperate children and adults trying to make sense of it all. So far, so yawn, right? Wan’s accomplished style and use of razor-wire editing and camerawork, not to mention a thunderous sound design, give the film its share of genre heft, but by the mid-point it all feels repetitive, build and crash, build and crash, build and crash, until the audience is left to wonder where it’s going. 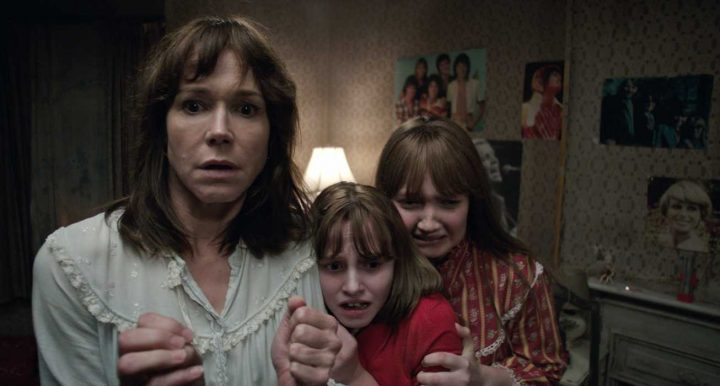 The second act, once Ed and Lorraine actually arrive in London at the behest of the Church, is where the film takes a firm grip and shakes the shit out of you. I think it’s the emotive performance of Vera Farmiga that sells the film’s tension the most, as her character is insistently spiritual to the point of docility, and it’s this restrained manner that juxtaposes starkly against the vile demonic horror unfolding in the people and house around them. Farmiga is abetted superbly by Patrick Wilson, who doesn’t have the same insight as his on-screen wife but has a resolve and calmness about what’s transpiring that, again, works in contrast to the demon. Wan cranks up the tension to insane levels, as the parasitic entity (no, no spoilers) continues to propel its agenda into the story; there’s a mystery to the demon, and a great “oh…shit!” moment towards the finale where the twist just floors you, before the film becomes a lampshade of dim rooms, wall-shaking sound design and plenty of screaming.

Wan’s sequel film is a lengthy proposition as well. Clocking in well over the two-hour mark, Wan, who receives a credit on the screenplay alongside three others, injects subtle humanity into proceedings. He provides the film with a sceptic, in Run Lola Run’s Franka Potente, and this earths the film’s spooky goings-on in a sense of reality, a sense that it might all just be faked (it isn’t, we know that, but they don’t) and gives the relationship between Ed and Lorraine a real genuineness to it that is lacking in other films of the genre. The protagonists feel like real people just trying to do the right thing, and that generates a sense of attachment towards them than makes us flinch when they find themselves in trouble. Kudos also to Wan for giving the principal haunted family enough time to gel, too. Frances O’Connor’s tear-streaked performance as Peggy, the coming-apart-at-the-seams mother, is heartbreaking in her powerlessness.

The Conjuring 2 takes its time getting the pieces together, and the reward is one of the most tense, genuinely frightening films of its kind. Although the opening act is generously predictable with its modus operandi of scaring the audience (I jumped once, the rest…. nah), the second hour is when the film hits its stride. The use of CG effects is kept to a minimum (or at least hidden by successful practical effects where possible), and the score by Conjuring maestro Joseph Bishara is appropriately engaging, adding to the performances of both the adult and child cast who do a lot of running, screaming, and reacting to shit that’s just mind-blowing. Easily the equal of its predecessor, had Wan slicked up the opening half this film would have been a legitimate classic.

3 thoughts on “Movie Review – Conjuring 2, The”