One part RPG-thriller, another part live-action Final Fantasy: The Spirits Within, Netflix’ 2014-filmed Spectral offers a slick, souped-up computer game aesthetic and gritty urban militarism without the combative emotional heft you might imagine. Ostensibly a war film against ghostly apparitions, Spectral’s sci-fi edginess and overheated tones feel low-budget despite a decent cast and Nic Matheiu’s energetic direction. The premise isn’t bad, and some of the film’s action sequences are genuinely entertaining, but the film owes too much of its genetics to other genre classics – including Aliens, among others – to be original, a pastiche of tropes hammered into shape by a tired, rote screenplay.

Dr Mark Clyne (James Badge Dale) is sent to the war-torn country of Moldova, which is engaged in a brutal civil war, to assess the results of his spectral imaging technology, which has picked up strange entities killing off soldiers. Arriving on base, Clyne is instructed by General Orland (Bruce Greenwood) and frosty CIA officer Fran Madison (Emily Mortimer) to accompany a squad of soldiers sent to pick up a marooned group of compatriots holed up inside the city. Led by Major Sessions (Max Martini), the squad soon encounter the entities themselves, and are devastated. With supplies running out and seemingly no way to combat the deadly beings, Clyne must use all his ingenuity to find a way to allow the fight to become even.

Spectral is a film focused on design and effects without character development to back it up. It’s a film about style over substance, which isn’t problematic in itself so much as the film struggles to generate much interest in why we should be concerned about all the hullabaloo. In spite of its apocalyptic end-of-the-world plotting, and hackneyed fetishisation of the military, or Matheiu’s kinetic yet anaemic ability to construct an action sequence, Spectral never gets out of second gear. It’s a film desperate to appear bigger than it is, and even though the ghostly apparition design and execution is convincing, for most of the time you kinda see where the lack of money was spent. 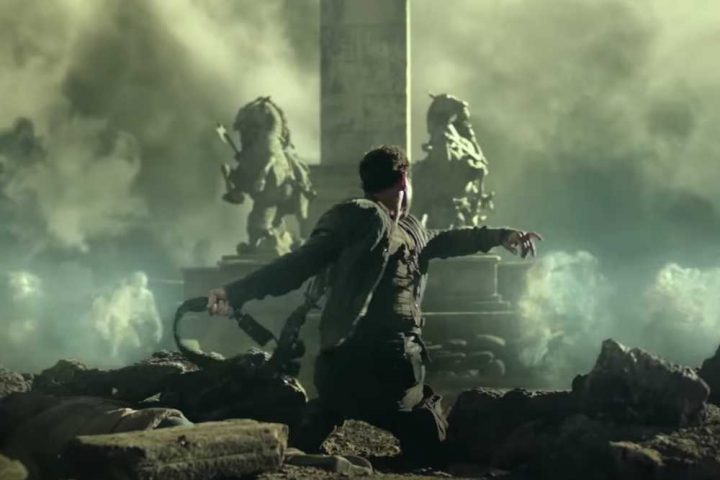 James Badge Dale’s lead character of Mark Clyne represents the pure scientific interest in the film’s resident antagonists, the ghostly apparitions against whom there appears very little hope, but he’s as bland a role as you can get; there’s something to be said for a character whose sole purpose is for exposition, which makes for perhaps the least interesting aspect of a film. Emily Mortimer’s CIA operative character goes the hard-bitten Ellen Ripley type early, before succumbing to archetypal maternalism as soon as the film injects children into the mix. Hardly nuanced, that’s for sure. Max Martini’s squad leader, the inexplicably named Major Sessions, is as lock-jawed as any military type and offers as much depth as a combat crater.

If I didn’t know better, I’d almost say Spectral was a badly mangled computer game turned into a generic, often-routine action flick. It certainly plays like it, with characters continually running into and away from danger. You half expect some HUD to appear midway through the film’s sweaty survivalist routine, complete with ammo count, lives left and energy levels, but it never comes. There’s bountiful weaponry and typical military hardware to wade through, so army nuts will delight in the film’s hoo-rah linguistics. Anchored by Junkie XL (Tom Holkenberg – Mad Max Fury Road) providing the thunderous score, edited by Jason Ballantine (Rogue, The Great Gatsby and Mad Max: Fury Road) and lensed by none other than Bojan Bazelli (Mr & Mrs Smith, Burlesque, The Lone Ranger and Pete’s Dragon), Spectral’s technical proficiency is lacking not in the least, if only its plot currency was worth more.

Spectral is the kind of film that looks nice as a poster or a trailer, but makes not a lick of sense as an actual feature film. Its central conceit is lifted almost directly from the aforementioned Final Fantasy feature from Y2K, and it never escapes this sense of familiarity, this sense of stock-plotting and generic characters. The film isn’t awful, and there’s a cool Michael Bay-esque explosiveness to proceedings that, for this viewer at least, is a shorthand entrypoint into Spectral’s mandate of entertainment. Visually, one can’t fault the film, and if a simplistic military venture is what you seek you’ll enjoy Spectral’s gun-toting antics without hesitation. But those looking for a more cerebral cinematic outing I would suggest look elsewhere. Here be monsters.