It is available to view on YouTube – you can view it in the embedded video link at the bottom of this review.

Clara Bow was regarded as one of the biggest stars of her era: for a (relatively) brief period in the late 20’s, Bow was the most successful film star in the industry, surpassing the big male names for box-office draw, such was her allure. One of the few silent film stars to eventually transition to talkies with any success, Bow’s peak arrived in 1927 and 1928, with appearances in 1926’s Mantrap, 1927’s Wings and It, and 1929’s The Wild Party, all going on to big box-office success and largely critical acclaim. Wings would become the first Academy Award-winning film for Best Picture. It, however, is one of Bow’s more accessible films, in terms of pure entertainment. Basically a Cinderella story (remember, this is the 20’s, and the term “politically correct” was yet to enter popular use), Bow lights up the screen in one of her most memorable performances; so much so, the phrase “the It Girl” was coined due to her popularity.

Plot synopsis courtesy Wikipedia:  Spunky shopgirl Betty Lou Spence (Clara Bow) has a crush on her handsome employer, Cyrus Waltham, Jr. (Antonio Moreno), the new manager of and heir to the “world’s largest store”. However, they belong to different social classes, and he is already romantically linked to blond socialite Adela Van Norman (Jacqueline Gadsden). Cyrus’s silly friend Monty (William Austin) notices Betty, though, and she uses him to get closer to Cyrus.

Like many a film of its era – and many a film to come since – It works on the premise of the American Dream: no matter how hard you work at your low-class job, if you find a handsome rich dude to marry you’re set for life. Clarence D Badger’s It, which is based on a series of magazine articles written by Elinor Glyn, effectively describes the vague sexual magnetism of somebody of the opposite sex and how one’s life will mysteriously change if one can harness that power. It’s a souffle film, despairing of intellect and yet overflowing with charm and wit, as Bow attempts to rise above her working-class background to win the heart of her wealthy boss, a straight-up Antonio Moreno. If the thought of a woman throwing herself at a man who initially doesn’t even notice her due to her station in life fills you with dread, It probably isn’t the film for you. Yes, it’s a product of its time, and a premise such as this would hardly gather much traction in today’s marketplace, but It retains an olde-worlde charm simply through sheer exuberance.

Exuberance led by Bow, whose work as Betty Lou Spence is both hilarious and luminous, and the film’s resident comedic counterweight, the delightful William Austin. Austin has the visage of a weird sexual Slenderman-esque predator vibe going on, but he’s more Max Detweiller to Bow’s Maria and Moreno’s Waltham, if I can seconder a bit of Sound of Music parallel. Bow’s vivacity and pep shines in almost every scene – the camera just loves her, and she knows it. Moreno’s Cyrus Waltham is a prototypical upstanding businessman, all square-jawed and masculine in his attractiveness (he certainly has “it”), but it’s Betty Lou Spence around whom the film’s sexually charged plotting swirl. 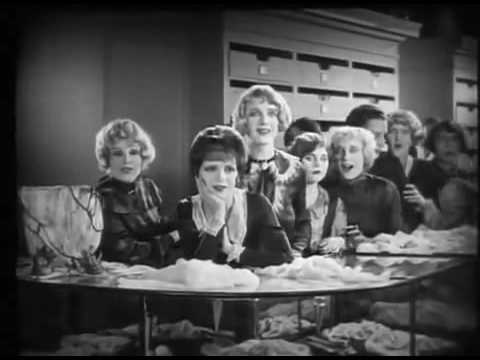 Clarence Badger’s direction is adequate, if not entirely weighted to mid-rage shots of people standing and talking, sitting and talking, and walking in and out of rooms talking. An occasional flourish, like a speedy rack-zoom as a man catches sight of a tizzed-up Betty Lou at a restaurant, indicate the helmer was at least trying to bring some energy to the film, but It is largely restrained in its technical prowess, and unlikely to capture silent film fans’ imaginations. The film’s cinematography, credited to H Kinley Martin, gives the film a real sense of softness, although the relatively plain production value (it’s all rooms and doors, this film) never gives him a chance to showcase his potential. The film’s editing (by E Lloyd Sheldon), is brisk and punchy, never dragging a scene out too long or playing everything as a wide shot – there’s enough close-ups and “action” edits to maintain modern audience interest, which is pleasing.

The cynical part of me wonders if It is really just a propaganda tool for Cosmopolitan magazine, though. Elinor Glyn’s writing was featured in the popular fashion bible and the author herself garners a number of direct mentions in a vaguely meta-textual manner to the point you can almost see a second edition print run of the magazine spewing from a warehouse in the mind’s eye. Dollars, I guess. While I don’t subscribe to Glyn’s theory of certain people having “it”, per se, the film really takes the idea and almost bludgeons it to death in its own sweet manner, and you can’t help but be carried away by its inelegant simplicity.

As far as silent films go, there’s plenty that meet the criteria of being classics, and I hesitate to apply that status to It. The film isn’t brilliant by any stretch, but manages to accomplish its ideals and star-making turn of Clara Bow with zest, melodrama and and undercurrent of then-taboo sexuality. Bow’s performance is lovely, charming and filled with “it” for sure, but the overall sense I get from the film is that it’s middle-brow comedic slapstick at best. As a technical exericse it’s indifferent, but worth a look for Bow’s coming-of-age role and William Austin’s decidedly creepy (but never evil) role of an upper class dillatente interrupting the quiet life of a hard working shopgirl.