If your kid has some kind of attention deficit disorder, Storks is the film for you. Paced like an out-of-control pram, throwing so many gags at you it is often painful, and occasionally uproariously funny – and altogether insanely stupid – Storks might lack creative weight but makes up for it in ingeniously silly, pretension-free japes that land more often than they fail. I’ll admit: in spite of the film lacking a single coherent bone in its body, I laughed my ass off multiple times, so there’s that.

Apparently, the age-old premise of storks delivering babies to couples has become so passe, they’ve moved on to delivering parcels like some bizarre avian Amazon offshoot. Run by Hunter (Kelsey Grammar), the stork delivery industry is about to be shaken up by the actions of soon-to-be-boss Junior (Andy Samberg). However, orphan human Tulip (Katie Crown), who lives among the storks following her delivery address being lost, accidentally creates a newborn baby when she receives a letter from a young boy named Nate (Anton Starkman), whose parents (Jennifer Anniston and Ty Burrell) are work focused and barely notice him. With the newborn in tow, Junior must attempt to deliver the baby with Tulip’s help lest Hunter find out and send him packing.

Watching Storks, you kinda get the sense that the production meetings for this film must have been a blast. Although co-director Nicholas Stoller is credited with the screenplay, there’s no way a film this fuelled by gags and one-liners comes from the imagination of a single mind – it surely must have been a group effort. In terms of sheer creative energy, Storks sings the song it plays loudly, often out of tune, and without a care in the world. It’s the cinematic equivalent of Chumbawamba’s “Tubthumping”, a ribald piece of overtly staged visual dynamism that will elicit strong reactions from the obviously kiddie-friendly skew. 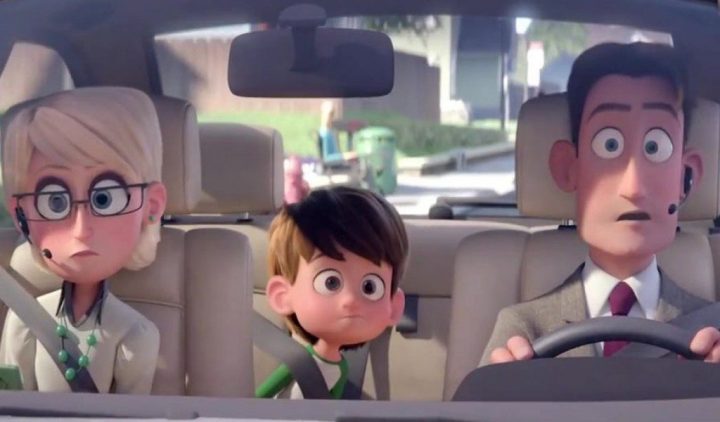 Betwixt its compliant subtext on family, finding similarity between differences and a sense of place within the world, Storks manages to heap in several clutches of instantly hilarious characters including a surfie-speaking pidgeon, a downright gut-busting pack of marauding wolves, and one of the cutest CG babies to grace the screen since Monsters Inc’s Boo. The film spreads itself over a dual narrative, that of Junior and Tulip, and the other of Nate and his parents, who come to realise their disparate life focuses and decide to welcome a possible newborn into their family.

Rising comedic journeyman Andy Samberg (Popstar: Never Stop Never Stopping), who’s provided voices in animated fare like Cloudy With A Chance Of Meatballs and the Hotel Transylvania franchise, goes for broke as Junior, as bland and underdeveloped character as you’ll find outside a Pixar film, while long-time animation voice artist Katie Crown more than amplifies the funny as Tulip – both deliver their rapid-fire patter with aplomb and verbal dexterity, although at times the continual stream of non-sequitors and gag asides does become wearysome.

Storks relies heavily on its frantic pacing, and to be honest I don’t think I picked up on all the jokes I could because I was laughing so much. The quality of the broad humour is desperate here and there, but more than a few joked are genuinely well handled, and while I can’t say this film will have high re-watch factor due to a slimly devised depth of story, there’s more than enough to recommend Storks purely as diversionary chuckles that demands little of viewers both young or old. Storks isn’t anything that’ll challenge for Best Picture, and feels like animated junk food rather than a solid meal: espousing core values of tolerance and family bonds, Storks is neither controversial or boring. Worth a look.