This review contains mild spoilers about Rogue One. It does not reveal specific twists or surprises, but does convey elements of the film’s plot that some readers might consider too revealing for their tastes.

The second of Disney’s Star Wars films, following JJ Abrams’ blockbusting The Force Awakens in 2015, Rogue One represents a departure for the feature films in that it’s not a continuation of the “Episode” films, revolving around the Skywalker family, but an anthology film – set within the Star Wars universe and features a whole new set of characters. Set immediately prior to 1977’s Star Wars: A New Hope, Rogue One is intended as a stand-alone film designed to fill-in-the-gaps of the franchise’s sprawling mythology by giving us a glimpse into the events only hinted at in exposition in George Lucas’ original movie. Now, one might argue that the film’s status as a “prequel” to the original trilogy is a concern, given the wallowing depths plumbed by the astonishingly dire Lucas-helmed Prequel Trilogy from the turn of the century, but now that the franchise has been wrested from the hands of its creator, Star Wars is in a very good position to recapture the allure, adventure and fun we’ve come to expect. 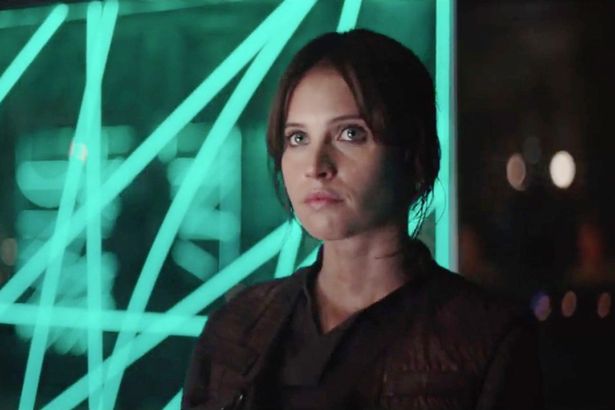 The galaxy is at a tipping point. The Empire has created a powerful new planet-destroying super-weapon, the Death Star, overseen by the conniving Director Krennic (Ben Mendelsohn), who finds his position usurped by others within the Empire’s venal leadership group (including one returning character from A New Hope). The plans for said Death Star are held in a secure facility on a distant planet, and their existence is a closely guarded secret. The Rebel Alliance, a fractious group led by Mon Mothma (Genevieve O’Reilly) secure the company of Jyn Erso (Felicity Jones), the daughter of weapons designer Galen Erso (Mads Mikkelsen), who was once rescued from imminent capture by another rebel leader, Saw Guerra (Forest Whitaker), as a child. Jyn’s connection to her father is crucial to the Alliance’s ability to infiltrate the Empire’s base and steal the plans, knowing there’s an inherent weakness within the Death Star put there by her duplicitous dad. Together with a band of rebels, Urso, intelligence officer Cassian Andor (Diego Luna), and warriors Chirrut Imwe (Donnie Yen) and Baze Malbus (Jian Wen), as well as droid accomplice K-2SO (Alan Tudyk), a plot is hatched to steal the plans to the Death Star to hopefully stop it from destroying untold billions.

Without question, Rogue One is a splendid film. It’s nowhere near the vaunted status of The Empire Strikes Back, mind, but it’s easily one of the best films the franchise has throw our way in many a long year. While no means perfect (more on this in a bit), Godzilla director Gareth Edwards’ operatic entry into the franchise’s canon contains plenty of humour, some solid action set-pieces, and a surprising emotional resonance I wasn’t expecting. Like Abrams before him, Edwards “gets” the sandbox he’s playing in because it’s the saga that influenced him most as a kid, and equal to The Force Awakens’ fan-service-heavy exceptionalism, Rogue One’s slow-build tension-driven narrative explodes into a wartime free-for-all between the Empire and Rebel forces that will make long-time fans pump the air in delight.

The film is by design an enigmatic ensemble piece. There doesn’t appear to be a designated “lead” character here other than Jones’ rough-n-tumble Jyn Erso, as much as she slides into the mix of testosterone inhabiting the masculine roster and almost disappears. Jyn’s insertion into the plot is derived from her belief that Galen, her father, isn’t the traitorous douche everyone else thinks he is, and while I don’t think the film captures this dynamic as well as it could have, it’s enough to make its point. Mads Mikkelsen isn’t given enough screen-time to counterbalance his daughter’s messianic faith in her father, but Jones works herself into the framework with conviction and elevates what might have been a fairly bland character into a strong female presence. She’s balanced by Diego Luna’s ambivalent Cassian Andor (a name that rhymes with both Lando Calrissian and Endor), whose backstory isn’t exactly forthcoming but who obviously has a story of his own we can only imagine. Luna’s motivations seem clouded by the film’s focus on its “plans” MacGuffin, and I’d have liked to see his relationship with Jyn fleshed out a touch more than it is here, but it’s a minor thing that in no way reduces the primary story.

Rogue One’s chief villain is Director Krennic, essayed by a steely eyed Ben Mendelsohn. Krennic is a weasel, a ladder-climbing lackey with delusions of grandeur, and Mendelsohn gives him the requisite amount of snivelling conniving – his continued beat-down by his superiors is testament to his lack of real power – without coming across as hokey or farcically melodramatic. He wants his due, wants to rise higher within the Empire, but even his overseeing of the Death Star’s construction isn’t enough to guarantee a spot in the Emperor’s court. In many ways, Krennic is a largely sympathetic character, driven by ego and desire without an ounce of compassion, but you feel his failure and that’s mainly due to Mendelsohn’s terrific intensity. 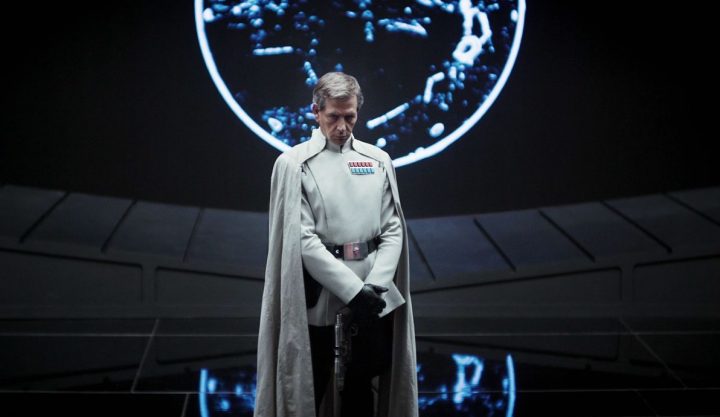 Of course, everyone wants to know how much of an impact Darth Vader, one of cinema’s greatest screen villains, has on Rogue One, and suffice to say while his presence is limited, his moments on screen are given requisite frisson by a canny Edwards. Vader is an icon, and Edwards uses him perfectly; an entrance midway through the film sees his enormous silhouette cast against a wall, magnifying his presence significantly, although it’s undercut by one of the saga’s worst jokey lines of dialogue (I think it’s the delivery, rather than the line itself). But it’s Vader’s final act in the last-gasp moments of Rogue One’s finale that will seal the deal on this film for fans. In my opinion, Vader’s brief, sixty second appearance at the very end is one of the most astonishingly cool character moments he’s ever had in Star Wars. It’s pure crack-a-lacking badassery, lacking the balletic violence from the Prequel trilogy and replacing it with a potent, magnified focus on achieving the mission.

Secondary roles to action star Donnie Yen, as a Force-attuned blind non-Jedi warrior, and his partner in the form of Jian Wen’s tank-like Baze Malbus (who sports the Star Wars equivalent of a Predator-esque mini-gun for the whole film), as well as Alan Tudyk’s scene-stealing new droid, K-2SO, and Riz Ahmed’s criminally underwritten defected Imperial pilot, flesh out the cast with competent performers in roles that form a proscenium arch of archetypal design, and while you innately get the sense on who – if any – will make it out the other end of this film alive, having these actors aboard gives the film a sense of scale.

Speaking of scale, Rogue One is possibly the most widescreen of all Star Wars films to-date, given the manner in which Edwards balances the smaller moments with the bone-crunching shudders of the various combat sequences. While the ground assault carried off by the titular rogues is designed to emulate a Saving Private Ryan sense of visceral terror, the space-bound aerial sequences, in which Imperial Star Destroyers, TIE Fighters and the Rebels’ X-Wing forces engage in one of the saga’s best ever dogfights, and it’s the film’s final third in which Edwards elevates this from merely another generic action spectacle into the resounding success he does. Edwards knows large-scale effects, and he brings weight and physics to bear in Rogue One’s earth-shattering destruction. The Imperial AT-AT walkers from Empire Strikes Back make an appearance, glimpses of franchise touchstones are squeezed into many a frame (crowd scenes alone will be freeze-framed to death in future, I wager) and the callbacks to A New Hope’s blockade-runner opening are obviously included. Edwards understands spectacle and goes all-out to deliver a fast-paced action flick when it’s called for, peppered with moments of character that – in my opinion – work more than they fail.

Significant spoilers in invisi-text below… Highlight the below area to read more!

One of the main issues I had with Rogue One wasn’t so much the story, or the new characters, but rather a key returning character; in Rogue One, considerable CG artisanship is employed in resurrecting a long dead actor by the name of Peter Cushing, who played Tarkin in A New Hope (before he was blown to smithereens in that film’s climactic fury). Using state-of-the-art digital effects, and unused footage from A New Hope, Edwards inserts Tarkin into Rogue One’s narrative that feels effective but inhabits Uncanny Valley far too much. For all those people who hated the humanoid renderings of Zemeckis’ Polar Express or Beowulf, a resurrected Peter Cushing feels just a bit too clever for its own good; it’s an effect which is certainly overused within the context of this film. I’m also wondering if it’ll stand up in about 20 years time. I think maybe not. A caveat to this, however, is the delivery of the film’s final line, uttered by another returning franchise player, digitally manipulated to bridge the gap with A New Hope. This moment, in particular, nearly made me tear up.

With the exception of its only major droid player, K-2SO, Rogue One boasts no new character who becomes instantly memorable. I suspect this is partly because the film is so driven by its ensemble it forgets to focus on a single character for more than a moment – despite a pre-title sequence involving the Erso family and a young Jyn’s escape from death at the hands of Krennic – and if there’s a long-term issue with the film this is probably it. Despite this, however, Rogue One offers thrills, laughs, a few “oh shit!” moments (colliding Star Destroyers, anyone?) and a kinetic, visceral return to the halcyon days of the saga’s most gritty aesthetic. As a prequel to A New Hope we know how the story has to end, and to his credit Edwards makes the film as legitimately tense as he possibly can, and as with Abrams’ style on The Force Awakens there’s a keen edged sense of realism in place of clunky CG sets and sequences, a la the Prequel Trilogy. It plays as a perfect starter to A New Hope (ending where that film kicks off) and actually makes the start of the ’77 film more emotional because of what occurs immediately before it. Which is an achievement in itself.

The first of Disney’s anthology films within the Star Wars universe, Rogue One delivers action, spectacle and rousing fun. It taps into your nostalgia for the original trilogy, but never to the point it overwhelms or undercuts the narrative within this film. Led by a stoic Felicity Jones, Diego Luna and a terrific Ben Mendelsohn, abetted by Michael Giacchino’s appropriately downbeat score (which does include some of John Williams’ established themes, if tonally modified to suit) and the gamut of franchise ephemera, Rogue One’s installation as a prequel sequel, sequel prequel, and stand-alone anthology film is assured on multiple levels. Despite a roster of thinly developed characters, Rogue One’s sense of robust adventure remains strong, and it’s this element I believe will hold the film in good stead in the decades to come. A blast of nostalgia wrapped up in a thrilling heist motif escapade, Rogue One hit all the right marks and delivers a heck of a Star Wars movie.

5 thoughts on “Movie Review – Rogue One: A Star Wars Story”