The iconic 70’s musical film based on Richard O’Brien’s off-Broadway stage hit is – pulling the pin on the grenade and legging it – exactly the kind of film you’d describe as famous simply for being famous. As a work of pop-culture iconography there’s few who’d argue that Rocky Horror’s influence across the decades hasn’t been profoundly hypnotic, spawning several instantly hummable song tunes and a number of quotable quotes (something about a lab and a slab springs to mind almost immediately), but watching the film today you kinda get the feeling that as a conceit, it’s more an experimental experience than it is outright cinema. It’s a film to be seen, and not examined. As garish as the visual pop of Jim Sharman’s trippy camerawork and choreography is, and as ludicrous as the “plot” and characters might feel, there’s actually very little within the confines of the production that makes sense or enlightens, content instead to simply spew its overblown theatricality and sexuality onto a willing audience. 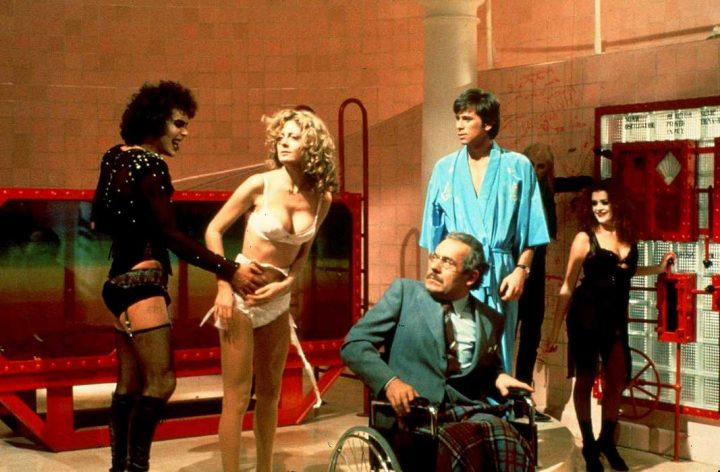 When newly engaged Brad Majors (Barry Bostwick) and Janet Weiss (Susan Sarandon) are stranded on the road with a blown tyre, they make their way to the creepy nearby castle of one Frank N Furter (Tim Curry), resident transvestite and cromulent leader of a rag-tag group of freaks and weirdos, including Riff Raff (Richard O’Brien), the maid Magenta (Patricia Quinn) and Furter’s groupie Columbia (Nell Campbell). Frank has crafted a monstrous creation up in his laboratory, a muscular hulking masculine sex-toy named Rocky (Peter Hinwood), setting off a firestorm of sexual awakening and conflict throughout the denizens of the castle.

As a kid, I always struggled with Rocky Horror’s structure in keeping my interest. The film starts out strongly, referencing everything from Frankenstein to American Gothic to rock-a-palooza as it blasts the audience with a delirium of visual shtick which is neither cohesive nor un-engaging: Brad and Janet make perfectly acceptable whitebread protagonists, virginal sacrifices to the sexual debauchery of Frank N Furter’s carnivorous manifestation. The opening half is such a whirlwind of satire, social jabs and mocking liberalism you can’t help but be swept up in the film’s excess. And it is excessive. As the story moves along, however, the film runs out of steam, with its second act becoming more strained and shock-for-shock’s-sake than the opening. Bizarre antics are all well and good but Rocky Horror’s inescapably overflowing sense of theatricality can’t hide the thin plot and legless antics of an increasingly desperate Frank.  Watching the film back today, the film’s lack of cohesion ultimately brings about its own ruin, making the final half hour an interminable trudge.

Obviously, the film’s key asset is Tim Curry, as the eponymous Frank N Furter, a stage/screen creation from which liberty and excess exude and offer the audience tacit approval to actually like. For all his over-enunciation and vowel-expanding delivery, Curry has an absolute blast as the vacantly shallow Frank, prone to violence and never suffering fools, gladly or otherwise. It’s a powerhouse performance that ranks as one of the actor’s best, and to my mind hasn’t been equalled. Susan Sarandon, who spends the vast majority of the film wearing nought but a petticoat and bra, and Barry Bostwick, square jaw and vaguely British stiff-upper-lippedness, get the joke they’re in on, and play up the parts of Janet and Brad with wry humour. The show’s actual creator, Richard O’Brien (Ever After), skimps about as Riff Raff and manages to not only provide the film with its secondary shining light but also a sense of verisimilitude. And then there’s Peter Hinwood, who, with his tighty-gold briefs and nothing else provides the homoerotic sexual frisson the film’s mid-section explodes into action; Rocky is the definitive sex symbol of the film, and Hinwood’s eyes-agape performance is hilarious. 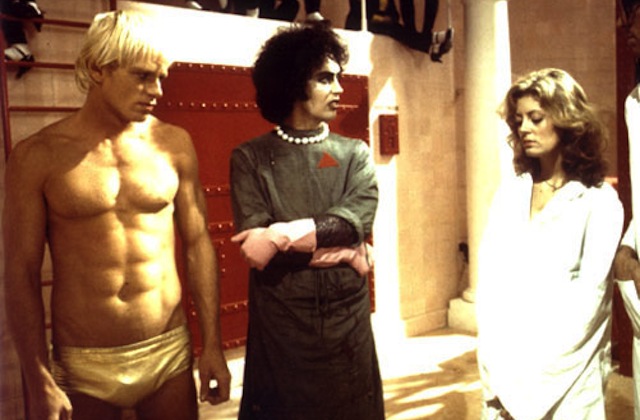 As much as Rocky Horror personifies acceptance and a taboo-breaking exploration of sexual liberty, there’s also a sense of confusion amidst the rock-n-roll antics. A brief prolonged music video sequence involving Meat Loaf as a disgruntled former lover of Frank’s, who barges in with his motorcycle and proceeds to rant and rave until he’s brutally slayed by the castle’s host, is a head-scratching moment to which you simply have to sit back and ponder what drugs these people were on when they made this movie. The sexual liberation of Janet (with Rocky himself) is a skin-tingling moment of forbidden passion, while the juxtaposition of Frank and Brad in bed together at the same time feels clumsy and somewhat awkward. The musical soundtrack pulses with energy and foot-tapping enthusiasm, and for the record I think this is one of the finest film soundtracks you’re likely to find, yet there’s never any real cohesion to the plot and musical accompaniment. Is the plot even significant? Is it supposed to move along with the music, or is the singing and dancing supposed to blind us to the fact that the film’s chief plot device is so clumsy you kinda drop your jaw wondering how that managed to become to popular?

Although it has its fair share of to-tapping tunes and stream-of-conscience innuendo (not to mention Susan Sarandon’s magnificent tits filling the screen at every opportunity), I’m of the opinion that The Rocky Horror Picture Show is a movie in search of a singular identity. It’s the cinematic equivalent of Multiple Personality Disorder, a film chock full of weird, wonderful and freaky shit, yet unable to bring it all together in a way that captivates in any cerebral capacity. I’m aware of its cult following, and I can see this film being a smash for the midnight screening crowd looking to get high and get weird, but when all’s said and done there’s actually not a lot here to truly get. Broad characters and incomprehensible plotting, not to mention the brazen non-sequitors and meta-references make Rocky Horror a very visual experience, but beyond watching Tim Curry’s electrifying Frank N Furter, this is one stage-to-screen musical that’s best listened to on the iPod.